Health impacts of climate change: time for health professionals to heat up the debate 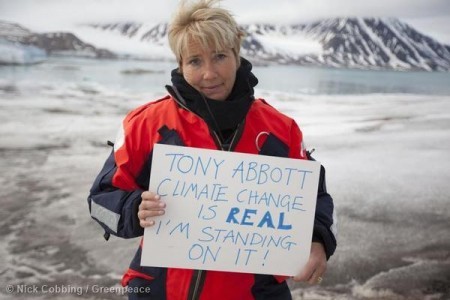 Thanks to the Climate and Health Alliance for lots of good reading, below, from its recent e-newsletter about the impact of climate change on health, and growing activism and engagement by doctors, medical scientists and others working in health.

In the wake of the axing of the carbon tax, a group of Australia’s top medical scientists have written an open letter in the latest Medical Journal of Australia urging Prime Minister Tony Abbott to put climate change on the G20 agenda.

They warn: “Current climate trends, driven by global warming, threaten the basis of future economic prosperity, regional political stability and human health”. See media reports from The Age and Guardian Australia and a ‘come in from the cold’ message to Prime Minister Tony Abbott from British actor Emma Thompson (see Greenpeace pic above).

Also recently in the MJA, one of the open letter’s authors, Emeritus Professor Anthony J McMichael, urges health professionals to engage more on climate change, warning that the human health dimension has been “largely overlooked”. Asking whether young, expansionist “settler” cultures such as the United States, Canada and Australia are prone to complacent disdain for tackling big, complex and inconvenient issues, McMichael comes up with a great variation on our anthem:

Our Prime Minister repeats endlessly that Australia is “a land of droughts and flooding rains”, a simplistic ploy that helps to sustain a land of doubts and fuddled brains.

The Age yesterday reported on a similar call to scientists by leading climate scientist Dr Michael Raupach at an Australian Academy of Science event.

Hot and bothered: our health under climate change also argues that the risks to human health are “not some sort of regrettable side show, some collateral damage: they’re a signal that things are going wrong at a pretty fundamental level.”

This is now being seen and identified in doctors’ rooms in the US, according a survey of US National Medical Association physicians conducted jointly by NMA and George Mason University. As this report describes, the majority of respondents reported adverse impacts of climate change on the health of their patients, through injuries due to severe weather, increases in severity of chronic respiratory disease related to air pollution, increased allergic symptoms and heat-related impacts.

And doctors can also take action in other ways: in June, the British Medical Association (BMA) voted to end its investments in fossil fuels, becoming the first health-focused institution in the world to do so (and joining over 27 cities, 29 religious institutions, 17 major investment and many universities).

The newsletter also links to Health Care & Climate Change: An opportunity for transformative leadership is a new resource from Health Care Without Harm which provides detailed guidelines & case studies to help healthcare facilities and staff reduce their reliance on fossil fuels.

There are more good links on human health and climate change in this recent Croakey post and don’t miss this edition of Radio National’s The Science Show where Naomi Oreskes talks about the book she has co-authored – The End of Western Civilisation: A view from the future – which  draws on scientific reports to describe the world 400 years from now.

Nature magazine says giant academic social networks have taken off to a degree that no one expected even a few years ago. Exploring why, here’s news on its survey on ResearchGate, a scholarly version of Facebook or LinkedIn, the site gives members a place to create profile pages, share papers, track views and downloads, and discuss research.

This systematic review found that food taxes and subsidies are likely to be an effective intervention to improve consumption patterns associated with obesity and chronic disease, with evidence showing a consistent effect on consumption across a range of tax rates emerging.