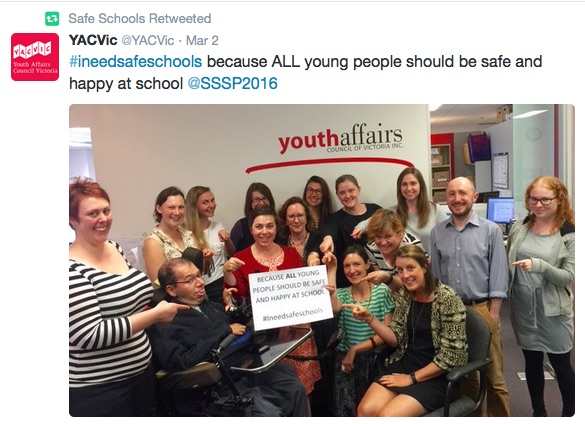 "...ALL young people should be safe and happy at school"

More than 70,000 people have already signed petitions supporting the Safe Schools Coalition, and now health professionals are being urged to sign this open letter in support of the program.

The letter says the Coalition’s work is important in mitigating the increased risk of suicide among Australian LGBTIQ+ teens compared to their heterosexual peers.

As health professionals and students, we are aware that these factors can profoundly and negatively affect mental and physical health outcomes and educational attainment for young people. However, these negative outcomes can be considerably ameliorated by caring adults and support at schools (Toomey, Ryan, Diaz, Card, & Russell, 2010).

In 2008, the Fourth National Survey of Australian Secondary Students Sexual Health, found that 9-10% of young people identified as being attracted to people of the same or both sexes (Smith, Agius, Mitchell, Barrett, & Pitts, 2009). A further national survey found 75% of same-sex attracted young people experienced some form of homophobic bullying and in 80% of cases this occurred primarily in schools (Hillier, et al., 2010).

Youth ’12, a New Zealand based study, found four out of every hundred students identified as transgender or were unsure of their gender (Clark, et al., 2013). A national Australian survey of the mental health and wellbeing of transgender and gender diverse young people found 61% had experienced verbal abuse and 21% physical abuse. Of those who had experienced abuse, over 80% thought of self-harm or suicide (Smith, et al., 2014).

Safe Schools Coalition Australia, which has already engaged over 500 schools and 13000 educational professionals in providing psychosocial support to LGBTIQ+ youth, is an invaluable program which has the potential to mitigate some of the negative effects of homophobic and transphobic bullying and vilification.

As health professionals and students, we recognize the emergent need for such programs to not only respond to the specific needs of same sex attracted, gender diverse, intersex and questioning youth but to mitigate against victimization, violence, isolation, which can have a significant and enduring impact upon the health and wellbeing of young people.”

The letter can be signed here.

PrevPrevious‘Girls Make Your Move’ exercise ads look good but are unlikely to deliver on their own
NextHow to eliminate violence against women and children? Download your free copy of this new publicationNext