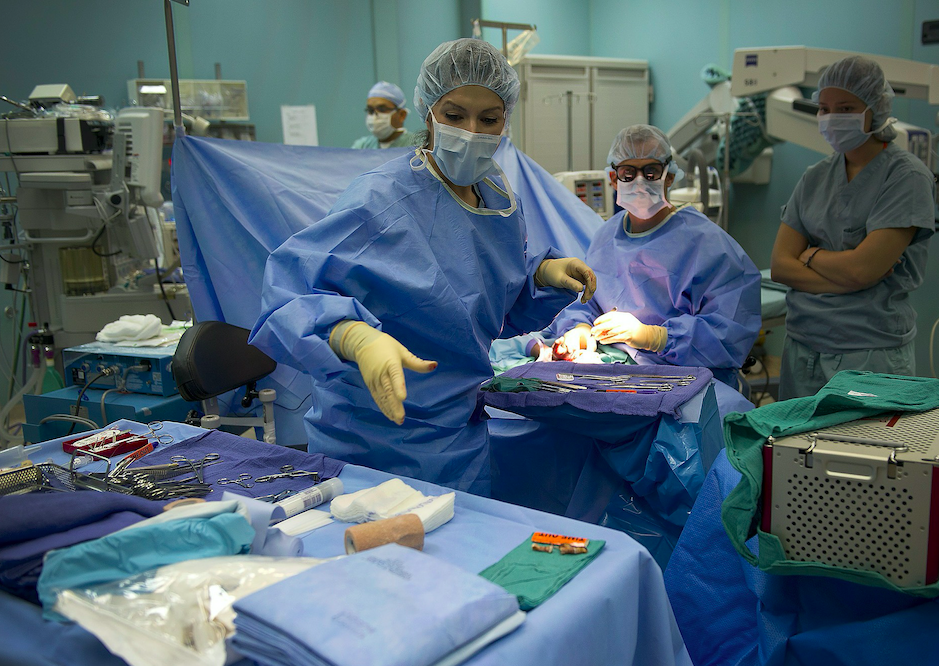 Our throwaway culture is in hyperdrive in hospitals, heavily contributing to the over-sized carbon footprint of the health sector generally and creating serious health and environmental risks.

Professor Linda Shields outlines the toll graphically in the article below and the lack of widespread, urgent efforts and interest to address it.

Climate change is the most important issue of our time. The survival of the earth and everybody on it depends very much on everyone on the planet doing something about the changes that human habitation is making to its climate and geography.

Much attention is being given to waste. It’s a very thorny issue, beset by ethical problems such as people’s rights to be consumers, the rights of those in poorer countries compared with rich ones; the use of coal for energy generation when renewables are available, and the massive generation of waste products from human activity.

Australia is just as guilty as anybody else when it comes to waste generation. In fact, we could be accused of doing much too little to ameliorate the effects of waste on the environment.

The excellent ABC television show War on Waste led by the quirky and indomitable Craig Ruecassel brought home to many of us the amount of waste we generate in our homes, businesses and activities.

But there is one aspect of human waste that no one seems to think about enough, and that is the waste generated by healthcare activity.

I became very interested in this when working as a perioperative nurse, and seeing the massive amount of disposable items, non-renewables, and bags and bags of waste that are generated during surgery.

To explain: during any operation, all the equipment is brought into the operating theatre, it is opened appropriately according to the requirements of the particular surgeon and the operation to be done, and it is all anticipatory. In other words, equipment is taken in in anticipation that it will be used during the operation.

Quite often, it is not, but as it has been opened and is deemed single use, it is put into the rubbish to be disposed of. Almost everything is thrown out at the end of the operation.

Of course, sharps such as needles and scalpels are disposed of appropriately in special bins and handled differently to general rubbish.

But everything else goes into big black garbage bags, the same as those that some people use in wheelie bins.

In a minority of places in Australia, this rubbish is incinerated; however, there is evidence that incineration is more damaging to the environment than the most commonly used method of placing waste in landfill.

Other items included laryngoscopes and other equipment used in anaesthesia, and things like metal instruments, syringes, nappies, tampons, safety glasses, goggles and shields, tourniquets, a range of dressings, and various other pieces made from largely plastics, and metals of all kinds.

Disturbingly, things like cytotoxic and other drugs, bone graft material, valves, and also body parts are included. While parts that are amputated (for example), such as limbs and internal organs will be sent pathology for examination, other bits and pieces go straight into the hospital waste – tonsils and adenoids, any tissue scraped off anywhere, pieces from different body parts that don’t need pathological investigation, the list is almost endless.

When all this goes into landfill it breaks down, and eventually leaches into the soil and water tables. One of our team, Associate Professor Michael Oelgemoeller, and others from James Cook University in Townsville, is researching the level of cytotoxic drugs, heavy metals, and hormones (such as oestrogen) that exist in water sources contaminated by hospital waste.

All this is truly disturbing, and the small observational study I have described is about operating theatres only. Hospitals are often huge places with enormous amounts of waste disposal, everything from plastic equipment, to food waste, and clinical waste.

And it’s just about impossible in Australia to find out from health departments the amount of waste that goes into landfill.

Various audit commissions in Australian states (in New South Wales, Queensland, and Victoria, for example) have, over time, tried to determine amounts of hospital waste and its components, often with difficulty.

However, on the ground in hospitals, operating theatres, and other healthcare facilities, there is little attention given to just how much waste is generated, nor its effect on the environment, the country, and climate change.

We have formed a team largely based at James Cook University in Townsville, and including the University Queensland Faculty of Medicine in Brisbane, to try to do something about this.

Our team has come up with a method that could, potentially, reduce the enormous amount of waste and turn it into a material that is safe and can be used for other things.

We have had trouble interesting any grant or funding body in supporting us. The grant bodies will not give us the funds until we’ve tested the process and its end products for safety, but we cannot do the testing until we have a grant, so we go round and round in circles.

An international waste company is interested in our work, and we hope that that will help us generate funds to do the testing and develop the process further, or, possibly, find other processes that will be equally effective in reducing the footprint of waste from our hospitals and health services.

A duty of care

We, as ordinary health professionals working in health services that generate the waste in the first place, can do much more.

The single use only processes that were generated to prevent people catching blood-borne diseases have been very effective, but two consequences have emerged.

It is much cheaper to dispose of a tray full of dressings, instruments, and other things used in a procedure than retrieving them, cleaning them, and sterilising and reusing them, or, at least, finding alternative uses for them within the health service.

The other factor that has a huge impact on the use of single use items is the risk averse and litigious culture that has developed in both health services and the community.

Surely it can’t be that hard to get health professionals, supply companies and their research organisations, and waste companies to work together to develop ways of recycling hospital waste items.

But how many of the health services know of that, or use it? How many people working in health services, which are notoriously busy and high-pressure, find the time to drop the used bags in the recycling bin rather than the general rubbish?

All health professionals can be aware of the waste they are generating, step back for a minute, and think about where it goes once it is put into rubbish bags.

With climate change at a tipping point, with dire consequences if it is not lessened, individual health professionals have a duty to know where their waste goes, what impact it’s having on the environment, and how it can be reduced.

We need to lobby politicians, make management aware if they are not already, talk to communities and people within them about the waste problem generated by healthcare, and take individual responsibility for what we do where we work.

• Linda Shields holds the position of Honorary Professor in the Faculty of Medicine at The University of Queensland. She recently retired from a research career in universities in Australia and Europe.

PrevPrevious“The Earth is critically ill”: A call for action from emergency physicians
NextAustralian health and medical authorities speak out on vaping risksNext