The Business Council of Australia has today released a report that is well worth a read, arguing for a more transformative health reform agenda and process than what has been on the table to date.

The report is called Using Microeconomic Reform to Deliver Patient-Centred Health and has a companion document, Selected Facts and Statistics on Australia’s Healthcare Sector.

It is interesting that the BCA makes a more prominent mention of health inequalities and the social determinants of health than our political leaders generally like to do, noting high in the report that:

The report argues that the health reform debate needs to be broadened both in terms of players and perspectives, and that citizens need to be more actively engaged in both debate and reform processes. It says that “the language of microeconomic reform has largely been missing from the health debate and conversely, health has been absent from discussions about microeconomic reform”.

Referring to last year’s COAG agreement, the report is skeptical about whether the national reform agenda will be sufficient to drive the transformation needed to achieve its vision, as illustrated below. 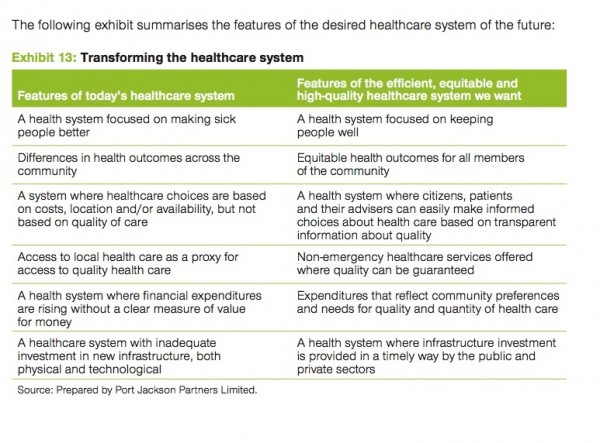 Meanwhile, for a thorough analysis of this week’s COAG agreement on health reform, thanks to the Parliamentary Library’s FlagPost for allowing this cross-posting.

Gains can come from incremental reform

After marathon negotiations over the weekend, the Council of Australian Governments (COAG) announced a revised health reform package. The new deal jettisons some of the more contentious and what had become unworkable elements of the previous National Health and Hospitals Agreement: some of the most problematic elements were the requirement that states dedicate a portion of their GST to health, and plans for the Commonwealth to takeover primary health care and fund capital investment in public hospitals through the ‘user cost of capital’ method.

The new health reform deal undeniably focuses on reforming the financing arrangements for public hospitals. Some health commentators have expressed disappointment with the deal because it is so hospital centric and does not achieve what Labor originally set out to do in health care. The reforms do not end the blame game (which will continue whilst ever there is more than one funding body), and they do not come close to being the biggest reforms in the history of the federation or since the advent of Medicare.

Some have also questioned whether the financing reforms outlined in the new deal, even when coupled with reforms to the governance of the health system, and to the aged care and primary health care sectors, are likely to lead the ‘more seamless care across sectors’ that is promised in the agreement.

Although expectations about what these reforms can deliver may need to be scaled back, at least in the short-term, past experiences show that it is still possible that these initial changes will deliver real reform to the Australian health system over time. In fact, when the reform experiences of other countries are examined it becomes clear that many of the most significant changes to health systems occur gradually, over long periods of time. Big-bang reforms that fundamentally alter the structure of the health system are very rare; although they are frequently proposed, they often fall over before major changes are achieved.

This pattern – where change occurs in health systems without major reform, and where major reforms often fail to deliver change – was first highlighted by an American political scientist, Jacob Hacker. He cites examples from his own country where proposals for major health reform have failed to deliver substantial changes to the health system. However he also points to examples from Britain, Canada, the Netherlands and Germany where the same pattern, of reform without change and change without reform, has occurred.

Australia is unusual because we have excelled at big-bang health reforms in the past. The introduction of Medibank in 1975 was undoubtedly a major structural change to our health system. It was soon followed by another, the dismantling of Medibank and revival of the voluntary, private health insurance system. And just to cement our reputation for making radical change to the health system, Australia decided to reinstate Medibank in 1984, this time with the name of Medicare. Australia remains the only country in the world to have introduced universal health insurance, subsequently abolished it, and then implemented the same system again.

Despite Australia’s ‘success’ with big-bang reform, it is worth noting that incremental changes on the ground have been a very effective way of achieving reform in other countries, particularly when control over the health care finances is shifted away from central governments and devolved to local levels.

There are several key changes within the new health reform package that, if fully implemented, have the potential over time to deliver real reforms to the Australian health system. The creation of local service delivery infrastructure (Local Hospital Networks and Medicare Locals), a single national funding pool, stronger national governance and performance monitoring all mean that it may be possible to devolve some decision-making about the delivery and financing of health care to the local level.

Refinements to the current package of health reforms will be needed over time; it is not clear yet what the most appropriate catchment area is for Local Hospital Networks and Medicare Locals and what powers the national governance agencies will have over providers. Governments are also likely to have to relinquish more control over financial decision-making to allow Local Hospital Networks and Medicare Locals to make changes on the ground. But if necessary changes are made along the way, it is possible that real reforms will be achieved in the way health care providers work together to provide seamless care for patients. And this would truly be the biggest reform since Medicare.

• Dr Anne-marie Boxall is a Senior Researcher in the Social Policy Section of the Research Branch, Parliamentary Library