Health organisations join those taking a stand against racism. #IStandWithAdam

It is important that health organisations are listed among those who have signed the statement below, taking a stand against the racism directed against prominent Aboriginal AFL player and former Australian of the Year, Adam Goodes.

The statement below was released today by the National Congress of Australia’s First Peoples. The signatories are listed beneath the statement, together with a selection of Twitter comments.

(Update: a statement from the Victorian Aboriginal Community Controlled Heath Organisation, VACCHO, has been added to the end of this post.)

“Australia must and can be better than this”

Today in advance of the weekend round of AFL, 150 organisations  join together to call for renewed efforts to stamp out racism in sport and everyday life.

For too long, we have witnessed the poor treatment of Sydney Swans star and dual Brownlow medallist Adam Goodes at the hands of fans during AFL matches. A proud Ambassador of the “Racism. It Stops with Me” Campaign, Goodes is a strong advocate for standing up against racism and for issues affecting Aboriginal and Torres Strait Islander peoples.

The booing, which has snowballed out of control this year since Goodes proudly displayed his culture during the AFL Indigenous Round, appears to be in large part racially motivated.

Adam Goodes is an outstanding Australian and should be commended for displaying a culture all Australians should celebrate and be proud of, and for taking a courageous stance against racism. The behaviour of the crowd that booed him is absolutely unacceptable and must stop.

To dismiss claims of racism as just banter is to use football as a shield for prejudice. Legitimate barracking for one’s team is a tradition that has been alive as long as the game itself but, when such behaviour coincides with cultural displays and Goodes’ efforts to stop racism, it is clear that a line has been crossed to racial abuse.

To suggest that this kind of behaviour does not have an effect is to deny the evidence about the known health impacts of racism. These are not diminished simply because the person being subjected to racial abuse is an elite athlete. It is deeply disturbing that this kind of racism may influence whether a player decides to take the field for one match or is forced out of the game for good.

If this isn’t stamped out, then we must ask what message this sends to future generations of Australians about the forms of behaviour that we find acceptable in this country. And what message does it send to young Aboriginal and Torres Strait Islander people about their culture, and what they can expect should they want to excel in sport or other fields.

It is a great stain on our nation that the experience of Adam Goodes is the lived experience of many Aboriginal and Torres Strait Islander people, and there is ample evidence that demonstrates the negative impact on mental and physical health, as well as life opportunities.

Racism has no place in Australian sport or our society at large. We commend the actions that have been taken inside and out of the AFL, but call on all sports and sporting clubs to develop coherent and far reaching strategies in partnership with Aboriginal and Torres Strait islander people to stamp out racism in sport.

As a starting point, codes and clubs should encourage members and supporters to join the ‘Racism: It Stops with Me’ campaign at https://itstopswithme.humanrights.gov.au

Australia must and can be better than this.

This statement is supported by the following organisations:

And watch this great clip with young footballers; read these articles by Stan Grant and Fred Chaney; and see #IStandWithAdam by author Anita Heiss.

Meanwhile, from the Twittersphere… 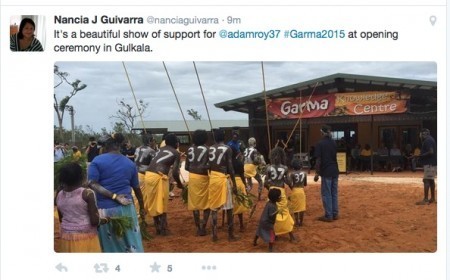 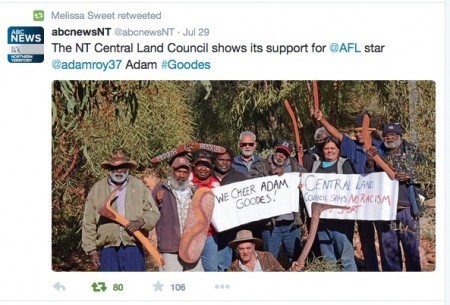 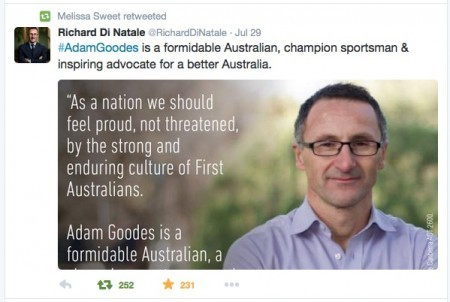 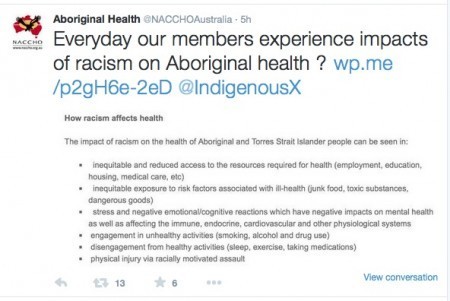 The booing of Adam Goodes calls for meaningful conversation about racism

There has been increased discussion regarding the booing of Aboriginal AFL player, Adam Goodes, which highlights the need to address the broader issue of racism. Goodes’ zero tolerance stance against racism alongside the pride he has for his heritage strongly promotes Aboriginal culture on and off the football field.
VACCHO recognises and applauds the AFL Captains and their teams who in unison, have supported Goodes and stood up to racism.  VACCHO understands and supports Adam’s decision to take a break from the game for his own health and wellbeing.
VACCHO is committed to improving the health and wellbeing of Aboriginal and Torres Strait Islander people to a level equitable to that enjoyed by the general Australian population. Racial discrimination has negative impacts on health and wellbeing, making legal protections promoting community safety and tolerance a crucial and critical conversation we must continue to have as a progressive society.
Twenty-two years ago the same conversation was sparked when Nicky Winmar responded to hateful abuse he received from AFL fans by lifting his jersey and pointing to his skin.  Community wide debate ensued from this and with assistance of other well-known Aboriginal players past and present, the AFL’s racial vilification policy was developed and adopted, making racist abuse banned on and off the field.
While the booing may be for a variety of reasons, VACCHO wants to highlight the impact that racism has on Aboriginal mental health and wellbeing; its negative impacts spreads throughout the communities, contributes to inter-generational trauma and perpetuates cycles of both poor physical and mental health.
There is a strong correlation between experiencing racism and a range of mental health conditions, including psychological distress, depression and anxiety.
Many people often assume that racism is overt, intentional, malicious and individual. Not only does this narrow perspective disguise more subtle and pervasive forms of racism, it also makes discussing and confronting racism more difficult . This needs to change.
Racism is widespread and not confined to the sporting arena.  The Australian Government report Aboriginal and Torres Strait Islander Health Performance Framework  (2015) quotes Kelaher et al  ‘…A study of 755 Aboriginal Victorian adults found one-third (29%) had experienced racism in health settings in the previous 12 months.
Racial discrimination is unlawful under both State and Federal legislation in particular circumstances, therefore, we need to put the responsibility of addressing racism back on the Government’s agenda.
Not only is player safety at stake, community safety is too. It is clear from the growing body of evidence on discrimination that interventions targeting organisational and community settings is desperately needed. Whilst VACCHO recognises the AFL’s efforts in combating racism we call on all levels of Government to take action against racism to ensure that their commitments to Aboriginal Health Equality are met  and our communities are safe from racism.

PrevPreviousNine questions about the state of public health in Victoria: #HealthyPolitics
NextThe medical aftermath of a day that changed the world: The FalloutNext