The previous Croakey post contained some advice, from the BMJ and elsewhere, for how health professionals might respond to the climate emergency.

In the article below, Fiona Armstrong, convenor of the Climate and Health Alliance, suggests the health sector should be engaging with social media, and invites you to join a social media Thunderclap on climate and health.

What does the latest Intergovernmental Panel on Climate Change (IPCC) report mean for health in Australia?

Authors of the health chapter say the report chronicles serious impacts to human health and wellbeing already from climate change, and warn of our limited ability to adapt to rapidly increasing global temperatures.

What is the IPCC and what does it report on?

The IPCC is a scientific body under the auspices of the United Nations (UN) – 195 countries are members of the IPCC.

Every four years, the IPCC releases a series of assessment reports on the most recent scientific, technical and socio-economic information produced worldwide relevant to the understanding of climate change.  Four Assessment Reports (AR1, AR2, AR3 and AR4) and part 1 of the Fifth Report (WGI or AR5) have been released to date. The AR5 WGI report covered the physical science and was released in September 2013.

The second part (WGII) of the Fifth Assessment Report (AR5) will be released this week. This IPCC Second Working Group report (WGII) covers the evidence on the impacts of climate change on humans and other species, the vulnerability of human society and other species and ecosystems to climate change, and on the adaptation measures underway or needed to minimise adverse impacts.

The third working group report on mitigation (WGIII) will be released in Berlin in April 2014.

This second report from Working Group II is an important one for health.

What does the IPCC WGII report say about health?

The findings of note from WGII include that climate change is affecting everyone in every nation on every continent, right now. Australia is particularly vulnerable to impacts on food production.  The report highlights that people everywhere are vulnerable to the impacts of climate change, especially extreme weather events that are now more frequent and more severe.

Despite long standing warning on the need for mitigation (curbing emissions) and adaptation (responding to minimise the impacts of climate change), levels of adaptation to global warming around the world remain low.

Some efforts by defence organisations, the tourism industry and insurance companies lead the way, but much more must be done. Failing to do so will put health further at risk, as it means we are not acting to avoid some potentially preventable impacts, like coastal flooding, heat stress from heatwaves, and the spread of disease.

The report shows that failing to cut greenhouse gas emissions will lead to levels of warming that will make some parts of the world uninhabitable.

Health professionals are urged to act to raise awareness about the health risks from climate change and the health benefits of cutting emissions. Unless these issues are more widely understood, we risk failing to take actions that may ultimately determine whether or not we survive as a species, this profound, manmade, global threat to health.

What can you do? 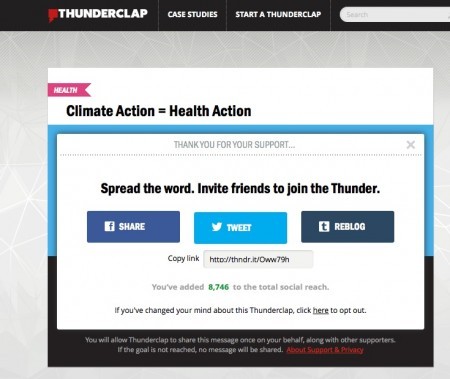 You can help promote the issues raised in the IPCC report this week by joining a social media Thunderclap on climate and health.

Have a look Climasphere for lots of resources about climate change and the IPCC report.

Later this week, you can check out a short film, share some info graphics and join a webinar on climate and health – look for details here: http://www.climateandhealthalliance.org/ipcc

Importantly, however, please do as CAHA President Dr Liz Hanna urges in this press release:

“Act at a global level, a national level, at state and community level and as individuals. We must do all we can to cut emissions and urge others to do so if we are to avoid putting health at greater risk. The reality is, cutting emissions will bring many immediate benefits for public health, as well as help limit climate change in the longer term. We can afford to do it, but we cannot afford to wait.”

• Fiona Armstrong is the founder and convenor of the Climate and Health Alliance www.caha.org.au – a national coalition of health groups working together to promote climate action.

PrevPreviousOn climate change and human survival: this is an emergency (and how health professionals might respond)
NextProposals for health budget savingsNext