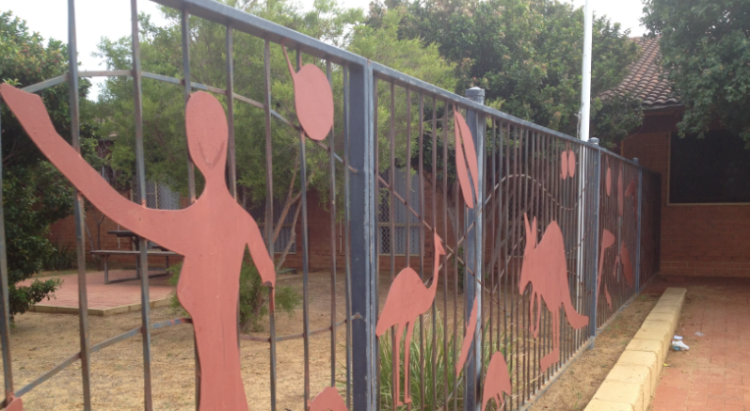 Photo of front fence at the Geraldton Regional Aboriginal Medical Centre in Western Australia, which hosted a prison health conference in 2015

Introduction by Croakey: Last week, the Northern Territory Labor Government passed changes to the Bail Act that are predicted to lead to more young Aboriginal people behind bars, directly undermining efforts to reduce deaths in custody and to improve Aboriginal health and wellbeing.

On the same day, the Federal Government handed down a Budget that failed to address the concerns of families, and community, health and legal advocates urging action on Aboriginal and Torres Strait Islander deaths in custody, with 15 April marking 30 years since the Royal Commission findings were released.

Meanwhile, the campaign for all Australian governments to raise the age at which children can be arrested or locked up from 10 to 14 years has released submissions to the Council of Attorney-Generals.

On the 15th day of each month this year, Croakey is hosting a Twitter “hour of power” to support a continuing focus on the need for action – by politicians and governments, policy makers and service providers in health, justice and community settings.

Below is a wrap of tweeting on 15 May by Associate Professor Megan Williams, Wiradjuri justice health researcher and educator, urging the mainstream health sector to take more responsibility for people in the criminal justice system, and to ensure Aboriginal and Torres Strait Islander public health people are at the table when related investigations, reports and inquiries are held.

The health sector has also been served a powerful call to address racism, with yesterday’s launch of a discussion paper, ‘Partnership for Justice in Health: Scoping Paper on Race, Racism and the Australian Health System’, published by the Lowitja Institute and Partnership for Justice in Health. It is by Associate Professor Chelsea Watego, Dr David Singh and Dr Alissa Macoun, and a longer report on this will be published at Croakey in coming days.

New South Wales Select Committee on the high level of First Nations People in custody and oversight and review of deaths in custody drew on 10 points from ALRC Pathways to Justice report.

ALRC had advisory committee of Aboriginal and Torres Strait Islander leaders and others with long history of working with mob. Need Aboriginal health and public health expert participation, to see these issues from a health perspective, push for health system response.

Health For All, health in all policies and the social determinants of health all intersect with justice but health experts often are not at the table in law reform inquiries or those speaking on over-incarceration of Aboriginal and Torres Strait Islander people.

So many mob in prisons are there with multiple, compounding health issues and most deaths in custody are from health issues. Health leaders must become full participants in what are seen as law and justice reforms, especially to use public health funding and research funds better.

Even looking at the ALRC recs supported by NSW Parliament, most relate to health, underscored by health or require health service responses.

Not that the mainstream health services or system are ready to support Aboriginal and Torres Strait Islander people. Reorient the gaze of inquiries to mainstream health and why they avoid taking more responsibility for people in the criminal justice system.

2) Properly resourced specialist First Nations sentencing courts. *hard to believe they don’t already operate; question is WHY don’t they – and investigating that will reveal blocks to progress*

3) Repeal of mandatory or presumptive sentencing.

4) Expansion of culturally appropriate community-based sentencing. *With what resources, and what strategies to addressed entrenched racism, bias and curriculum gaps among those who control policy and funding in mainstream government departments? @Ahpra and cultural safety role?*

5) Diversion of resources from the criminal justice system to community based initiatives that aim to address the causes of Indigenous incarceration. *causes are racism so this is misaligned, and there are few community options and major gaps in mainstream org staff skills*

6) Revision of bail laws to require bail authorities to consider cultural issues. *SHOCKING that they don’t already regarding #RCIADIC30Years*

8) Abolition or restriction of offences relating to offensive language to genuinely threatening language *Still asking for this? Left to go on way too long*

9) Fine defaults not resulting in imprisonment. *Occurring since 1788, so, investigate HOW this can be reformed in practice?*

Pretty much all prisons have an over-representation of Aboriginal and Torres Strait Islander people in them, hinted at but not reported on in government’s own minimal @ABSStats.

Health of people in prisons is also minimally reported on by @aihw but still clearly shows Aboriginal and Torres Strait Islander people have worse health and more health issues and at a younger age.

Many compelling reasons to have Aboriginal and Torres Strait Islander public health people with prison health lens firmly at the table, on the inquiry committees, on the panel discussions, at Coroner courts. See #JustJustice #JusticeCOVID series (download these reports here).

And please join us 15 June to pay further attention to #RCIADIC30Years recommendations including about racism, chronic conditions among people in prisons and prison health workforce needs. 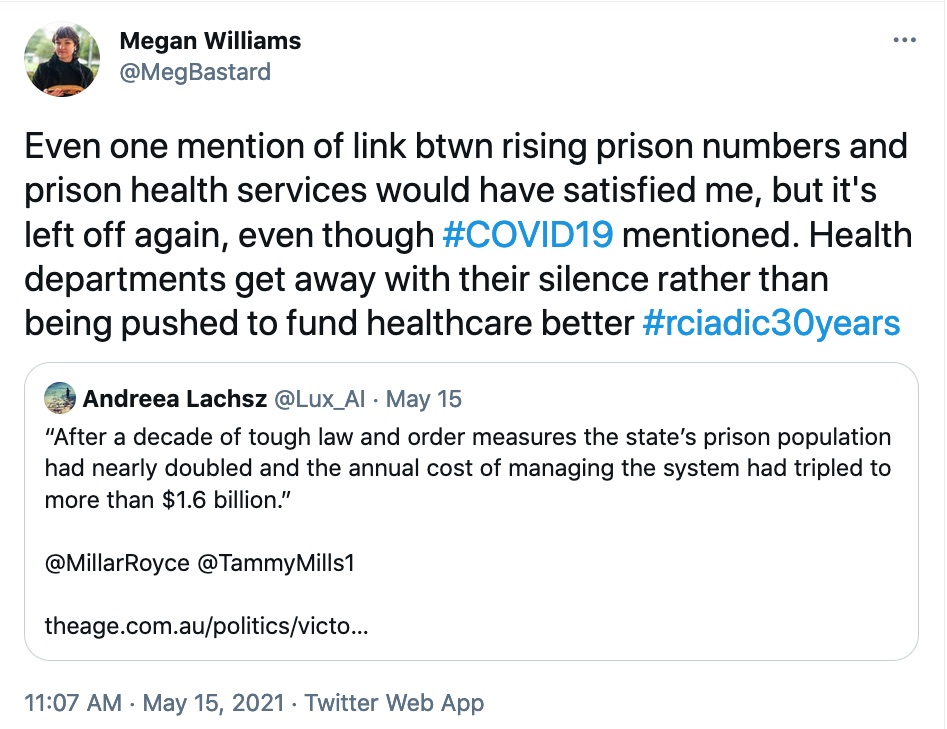 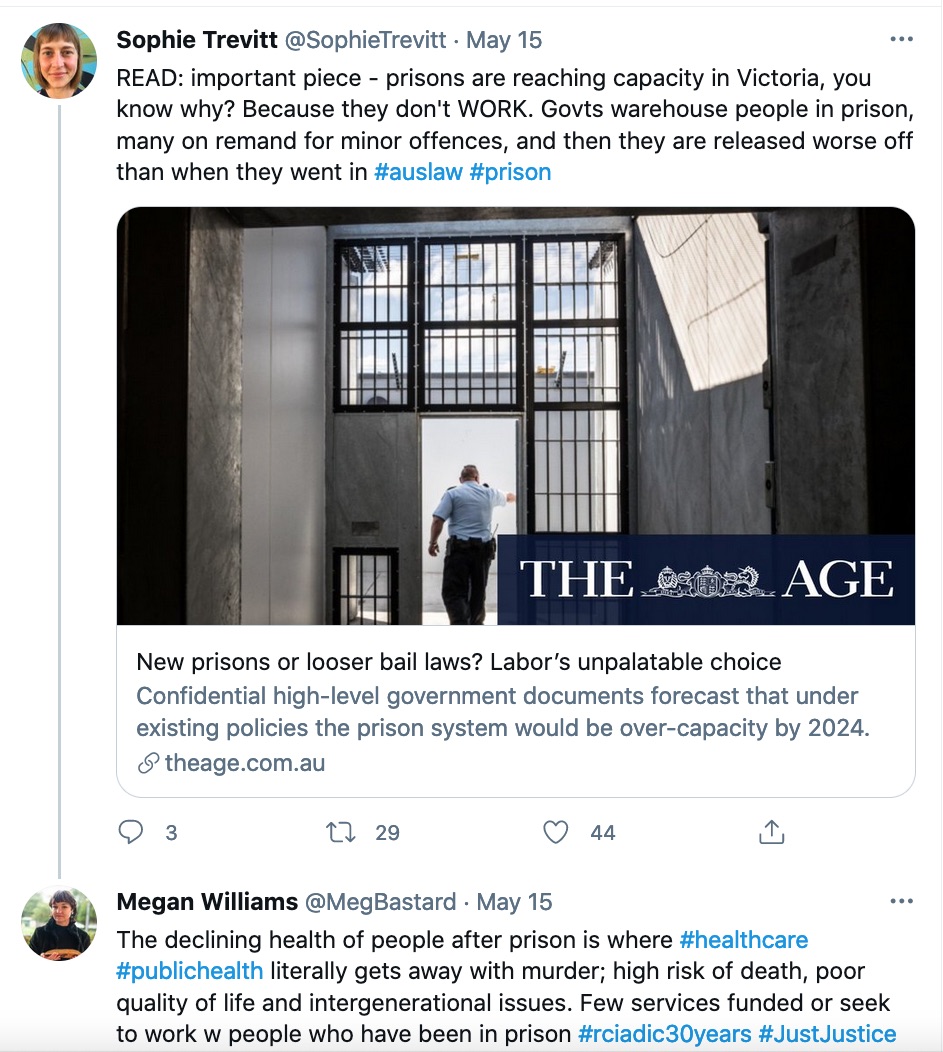 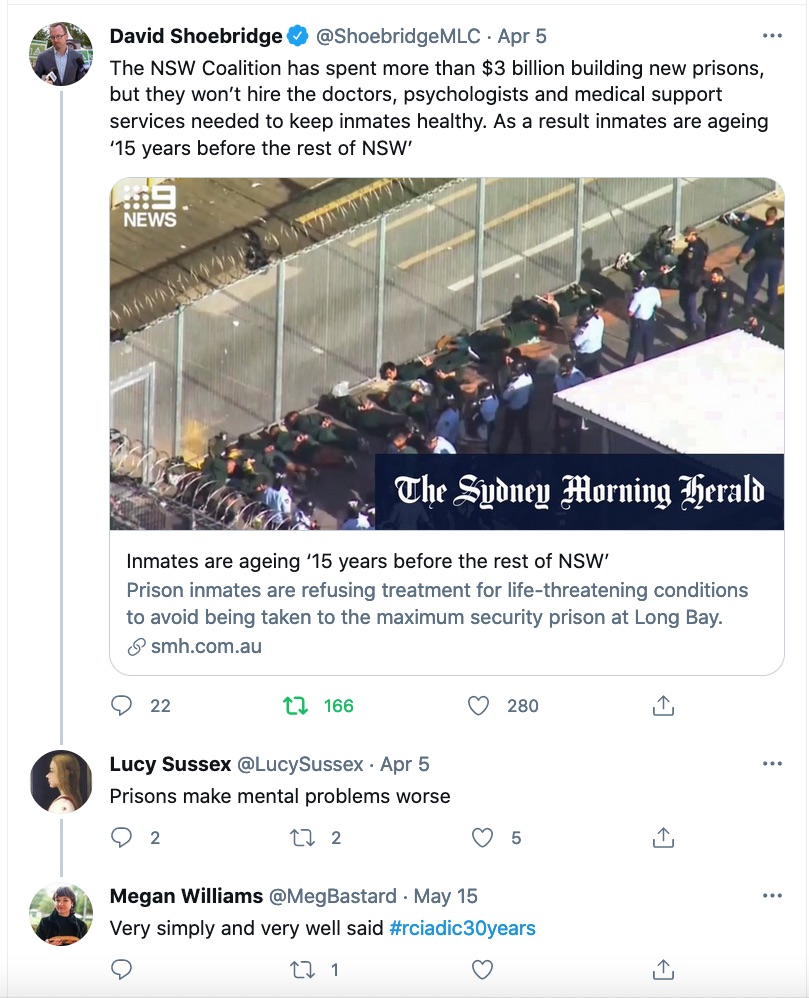 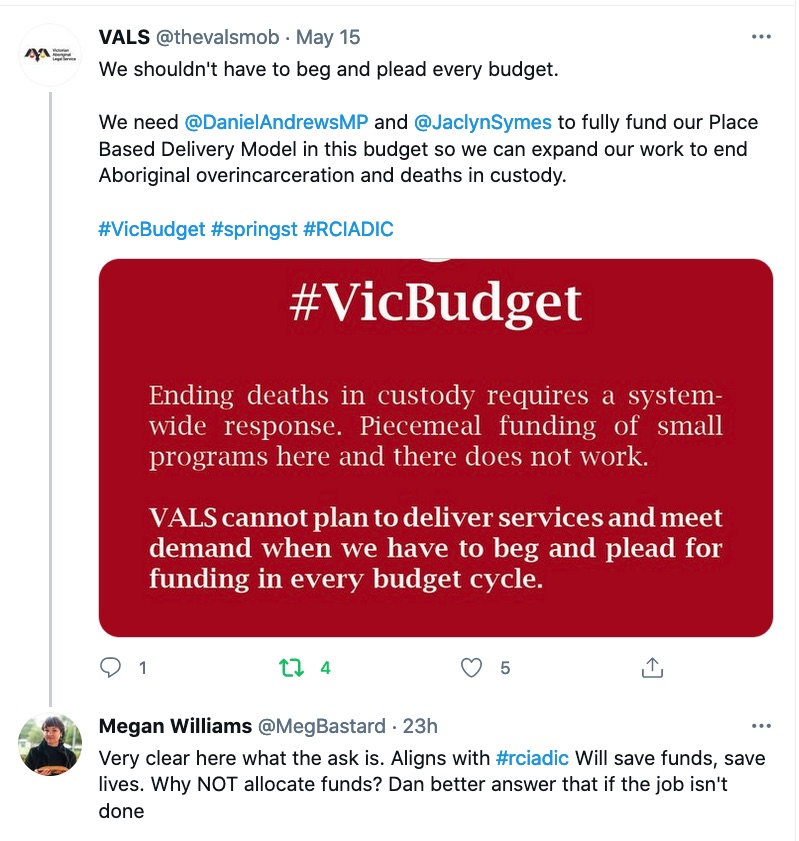 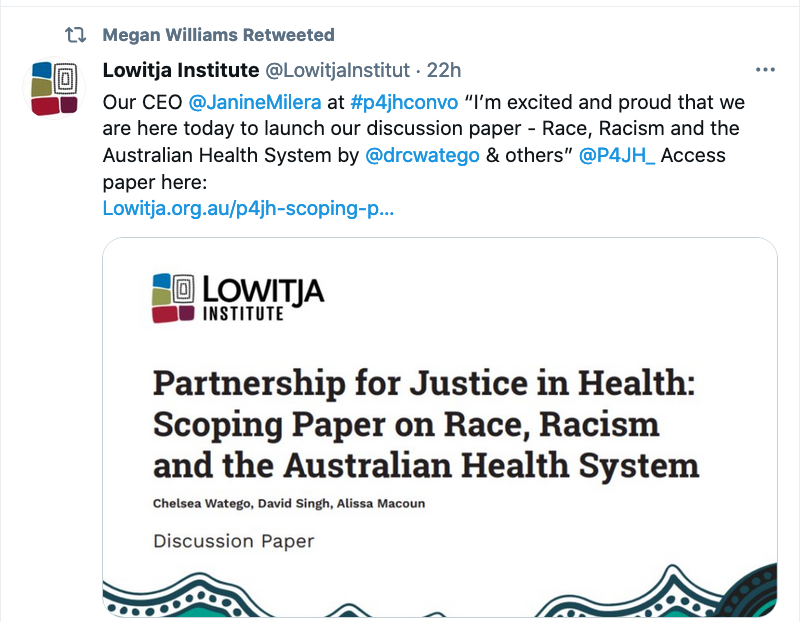 Associate Professor Megan Williams is the Research Lead and Assistant Director of the National Centre for Cultural Competence at the University of Sydney, and a contributing editor and Co-Chair of Croakey Health Media.

PrevPreviousWhile rich countries experience a post-COVID boom, the poor are getting poorer. Here’s how Australia can help
NextSpeaking up for health equity at the CroakeyLIVENext