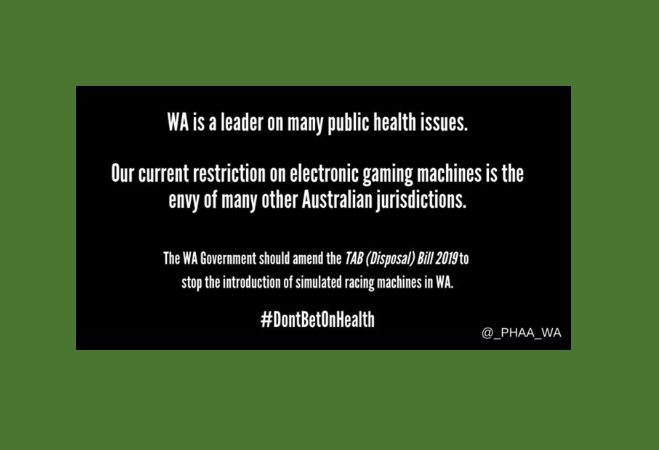 Health warnings over WA’s plans to introduce “pokies by stealth”

Plans to allow simulated racing machines to be placed in Western Australia’s TAB outlets are sounding public health alarm bells, as will be outlined during a public forum on electronic gambling and harm, in Perth tomorrow (5 August).

In the article below, Hannah Pierce, President of the Public Health Association Australia WA Branch and Melinda Edmunds, Senior Coordinator at the Public Health Advocacy Institute of WA, say that the WA Government is gambling with the community’s health.

Western Australia is a leader in many areas. We have a history of strong tobacco control. We elected Edith Cowan to the WA Legislative Assembly, making her Australia’s first female parliamentarian. We have the best beaches in the country (hotly debated, but definitely true).

And currently, we are the only jurisdiction that restricts electronic gambling machines (commonly known as poker machines or pokies) to the casino.

Unlike the rest of Australia, our clubs, pubs, and hotels are free from the flashing lights and enticing noises that characterise the highly-addictive, incredibly damaging poker machines, with the exclusion of Crown Casino.

Unfortunately, this claim to fame may come to an end when the WA Parliament resumes. The State Government is considering legislation to privatise the TAB, the state-owned betting agency.

As part of the sale, the legislation will permit simulated racing machines, commonly known as Trackside to east coasters, to be placed in TAB outlets in WA.

This addition is seen by many parliamentarians as adding value to the sale price of TAB. Despite strong concerns from the social service sector in WA, the Bill has already passed the Legislative Assembly.

It would seem the WA Government is putting the sale price of the TAB over the health of the WA community.

So what is a simulated racing machine? Simply put, it is a computerised dog or horse race.

The machines allow the punter to bet on a simulated race, where the winner is randomly generated. Sounds pretty similar to a poker machine huh? You put money in and the machine chooses who wins.

The WA Government is adamant these machines are not like pokies. But really, when you have the opportunity to continually gamble without needing a real live race, the premise is exactly the same. Even if you have to wait a little longer to place the next bet, it is still only a short break! 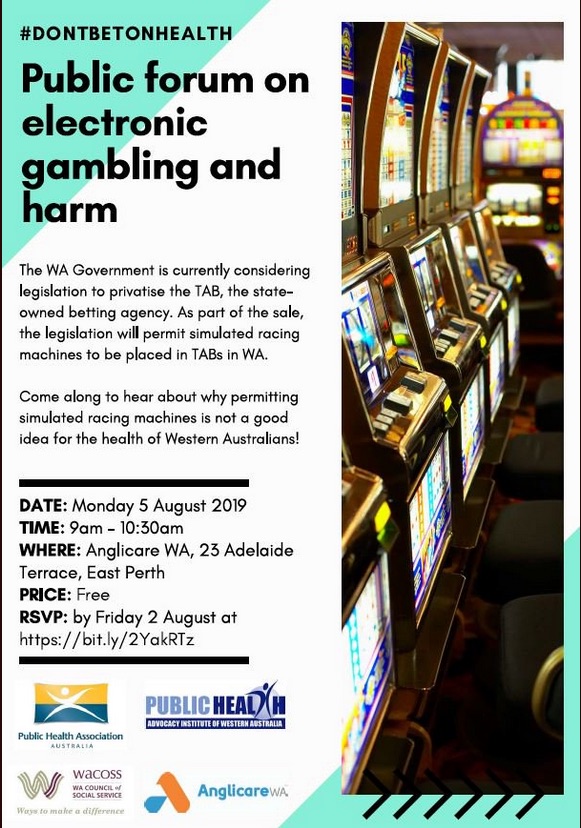 Pokies by stealth seems an appropriate way to describe the proposed introduction of these machines.

Both the Labor and Liberal Party made a 2017 pre-election commitment to keep the restriction on pokies in WA.

It’s also interesting to note that in 2016, the then Opposition Leader Mark McGowan questioned the Liberal Government on whether it would include simulated racing machines as part of the deal to sell the TAB, and appeared to be concerned about the inclusion in the sale.

Fast forward to 2019, we have Trackside included in the sale of TAB to enhance the deal. Given Labor has changed its position on this issue, is it possible we will see a further expansion of pokies in the future?

We really hope not. WA has the lowest per capita expenditure on gambling in the country. While the national per capita spend is $1,251, WA sits at $683.

It’s likely this is due to the physical restriction on pokies. Despite the concern about sports betting in the community and the media, it is pokies that account for around 51 percent of Australia’s gambling expenditure.

It will highlight all the reasons why WA should remain free of pokies. The Greens (WA) have already moved an amendment in the Legislative Council to remove Trackside from the legislation. So we will be keeping the pressure on the Government to encourage it to amend the legislation.

WA has long been the envy of the rest of Australia in this space and we don’t want this to change. It is time to tell the WA Government #DontBetOnHealth!

You can be part of the conversation on this issue by following and tweeting #DontBetOnHealth. 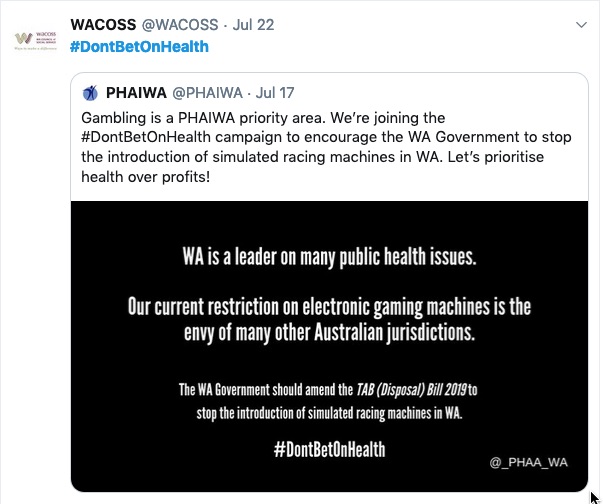 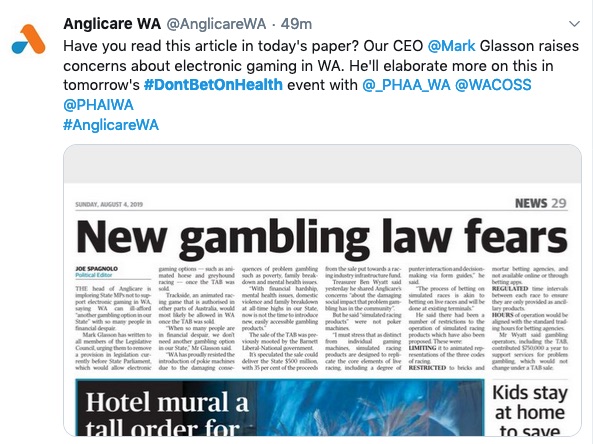 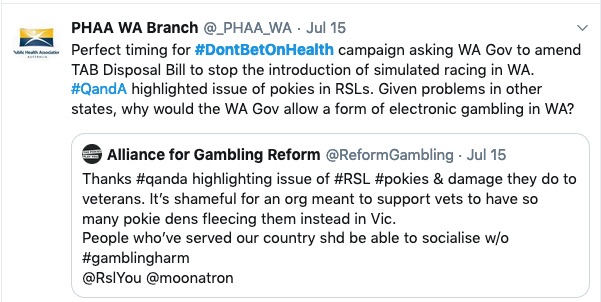 PrevPreviousFirst Nations solutions for global change – a focus on “speaking” at #LowitjaConf2019
NextTo reduce suicides, boost social payments and supports – and other calls from #MHAgeingNext