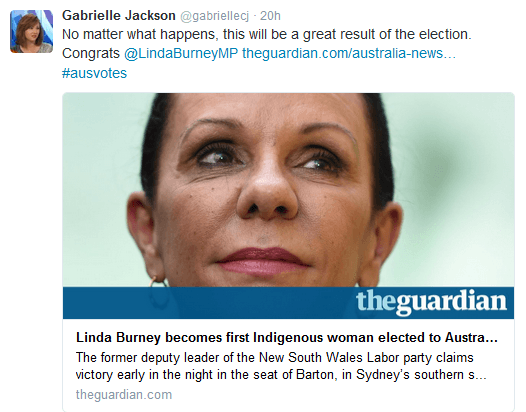 Health was top of the 2016 election agenda: but how healthy is the result?

By almost every report, health was a decisive issue in Saturday’s tumultuous federal election ­– but how healthy will be the result?

First up, as the image above shows, the good news – and a perfect start to the 2016 NAIDOC celebrations – came with the election of Linda Burney as the first Indigenous woman in the House of Representatives (see reaction on Twitter below, and also follow Croakey colleague Summer May Finlay at @wepublichealth this week, covering #NAIDOC2016).

But, beyond that is the immediate uncertainty over who will govern and what that might mean for health and health funding (see what the Coalition’s health history already warns us about).

And then there is cause for concern about the outcomes of the Prime Minister’s double dissolution strategy, not least the return of Pauline Hanson in the Senate. Her platform includes a push for a Royal Commission into climate science and Islam, among much else of concern. 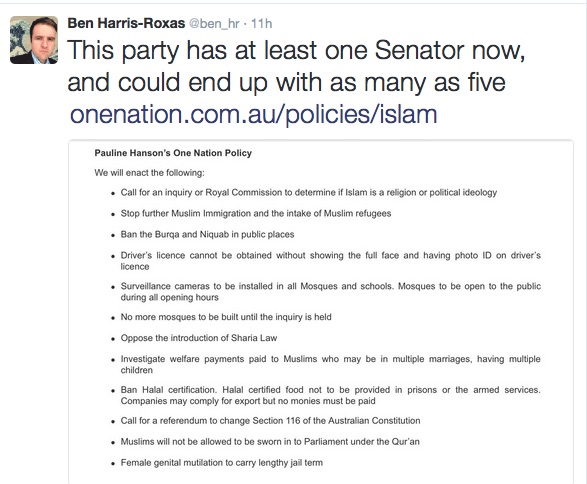 Australian Marriage Equality (AME) issued a statement saying that the election “has delivered an increase in parliamentary support across all political parties”.

But what if Hanson is joined in the Senate by Fred Nile’s conservative Christian Democratic Party, and if Prime Minister Malcolm Turnbull is put on a tighter Conservative leash or replaced? How will that further poison the marriage equality debate?

Does public health need to broaden its focus beyond the traditional silos of tobacco, alcohol, activity etc and make social cohesion/inclusion and anti racism core business? Perhaps this is worth reflecting upon in the wake of Brexit and this election’s results. 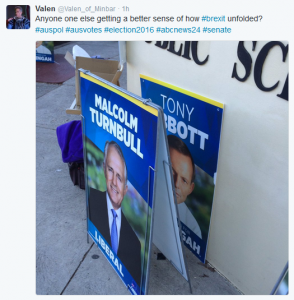 Where was the real acknowledgement, beyond the overwhelming “jobs and growth” mantra of the Prime Minister, of lack of job security and the casualisation of the workforce? These are real issues affecting many of the areas like Tasmania that have stung this latest first term government.

The Greens may be among the winners from the election (and announced today that Turnbull’s seat of Wentworth will be in their sights in coming elections) and they may pick up a second House of Representatives seat in Melbourne. But it seems unbelievable that they could lose a Senator (in South Australia, though they may pick up one in Queensland). What does that say about our prospects for effective climate action?

What also will be the cost of political and legislative uncertainty?  There had already been question marks over a range of services from July 1, with little of that resolved during the extended eight week campaign and caretaker government period.

And there will and should be a focus on the electoral system itself, with reports that many voters were confused by new voting arrangements and instructions – raising big issues around democratic access and participation as the tweet below notes. See also this excellent crunching of the voting state of play so far from Tim Colebatch at Inside Story, which reports that, so far, 6.1 per cent of Senate votes have been ruled informal, more than half a million of them already, up from 2.9 per cent last time. 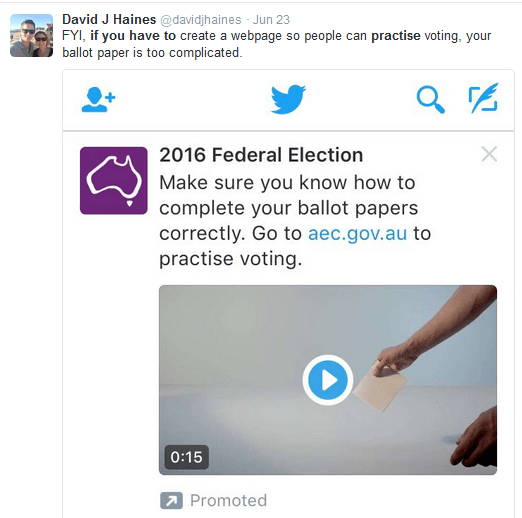 Meanwhile the Prime Minister and many others in the Coalition are railing against Labor’s Medicare “scare campaign”, with police called in to investigate the use of political text messages sent on election day – under the name or heading “Medicare” – warning voters it would be privatised by a Coalition government.

But so much of the discussion around Medicare “scare campaigns” continues to miss the point, as Dr Tim Senior and others suggest below, via Twitter.

See below for other Twitter reaction, and statements from the Australian Medical Association and Australian Healthcare and Hospitals Association (AHHA). 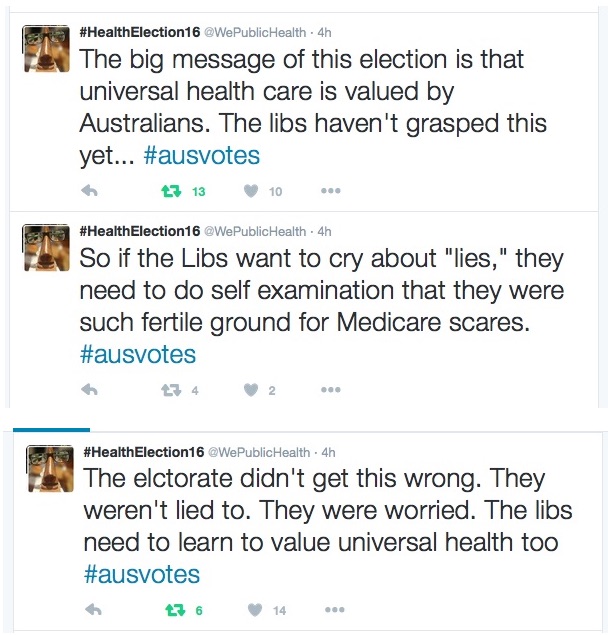 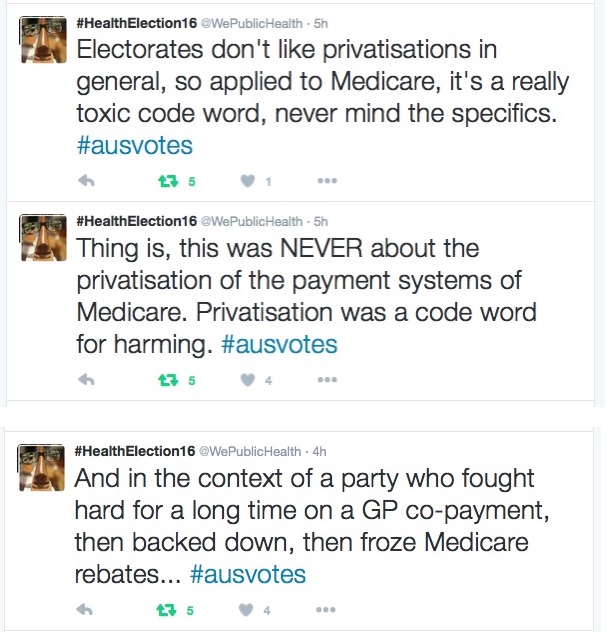 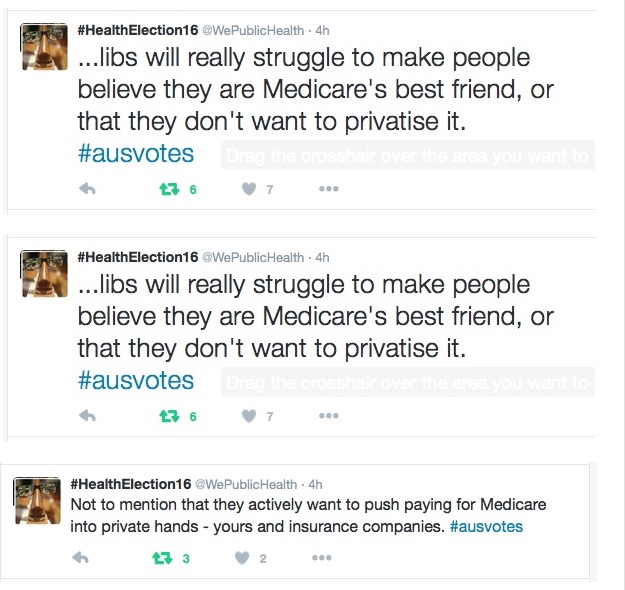 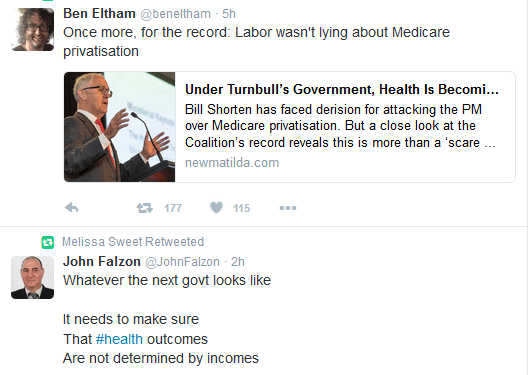 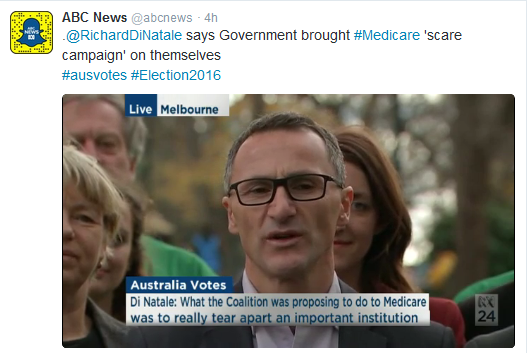 “Whatever the final composition of Australia’s next government, there has been a clear message from voters that primary health, hospitals and Medicare matter.”

“Health is a national priority for the Australian people and it must be a priority for our elected representatives. It is not sensible for political leaders to dismiss reasonable concerns from voters about the adequacy of public hospital funding and the ever-increasing out of pocket costs for healthcare.

“Defensive claims about a Medicare scare campaign are not helpful. The Coalition must recognise that three years of disjointed health reviews and reforms, alienation of key stakeholder groups, and significant cuts to funding felt right across the sector and particularly by patients, have given voters cause to doubt whether it can deliver the health system they want.

“Strong Commonwealth leadership is required to ensure equitable, accessible and affordable healthcare for all Australians, regardless of how much money they have or where they live.

“Issues such as greater cooperation between the Commonwealth and the states and territories on hospital funding, preventive care, a strong primary care sector, better integration of primary and acute care, and better use of health data, are central to the provision of the high quality healthcare Australians need,” Ms Verhoeven said.

“What can be learned from the past three years is that the Commonwealth must work with service providers, professionals and the community as it seeks budget savings to ensure that access to universal quality healthcare is not eroded.

“Uncertainty around sustainable, long-term funding for the health system must end. Whichever party forms government must work with all stakeholders to ensure certainty for public hospital funding beyond 2020, and to strengthen the primary care sector, both in terms of payment models and through innovative models of care.”

Dr Gannon said the clear message from the election was that health policy was a vote changer, and that Australians want access to high quality and affordable health services.

The exit polls confirmed what the AMA had been hearing from its members in the lead-up to the election: people want confidence that they can see their doctor or get to a hospital when they or their loved ones need health advice or care”

Grassroots doctors across the country shared their concerns with their patients.

Local family doctors had genuine fears about the livelihoods of their practices.

The AMA and other health groups spent months urging the Government to change some of its health policies, especially the Medicare freeze.

The Government’s refusal to change key policies allowed the Opposition to spread misinformation about the privatisation of Medicare.

But we believe that people who voted because of health policy were influenced by credible information from trusted doctors and other health professionals who campaigned against the Medicare freeze.

Whoever forms Government, the AMA stands ready to work cooperatively on the development and delivery of health policies that will best serve the needs of the Australian people. 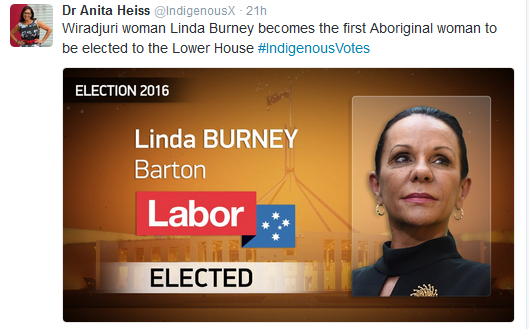 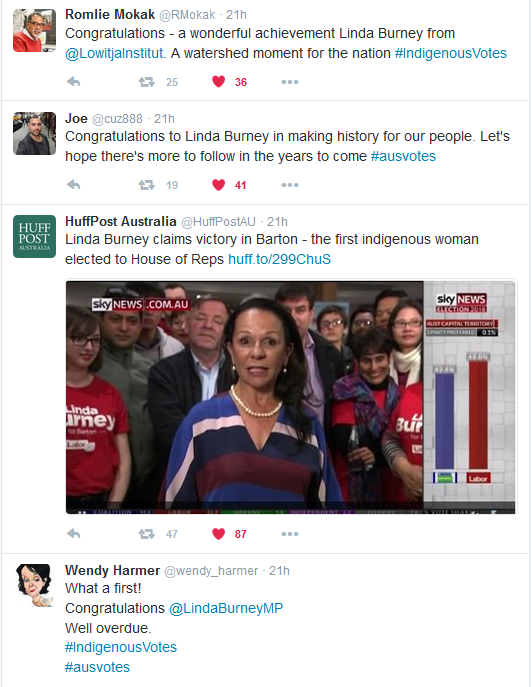 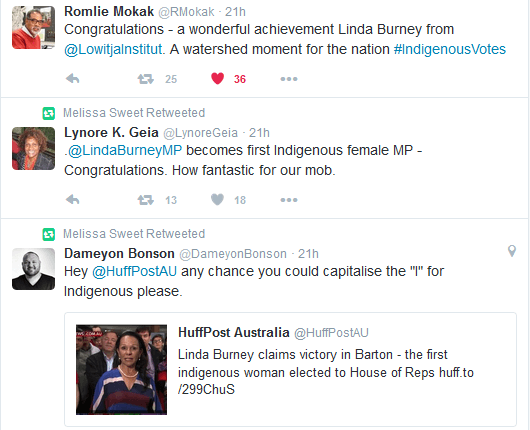 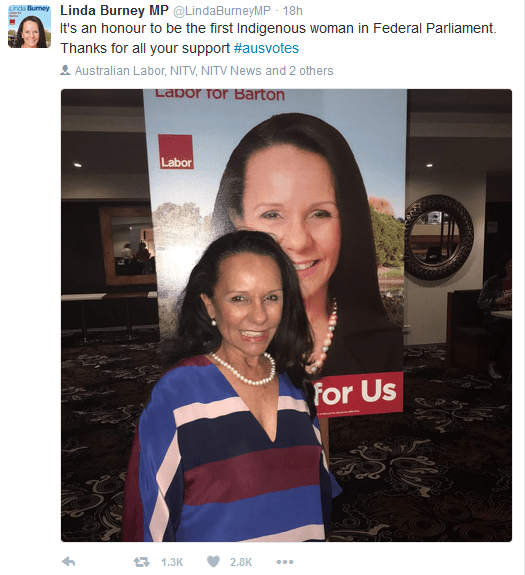 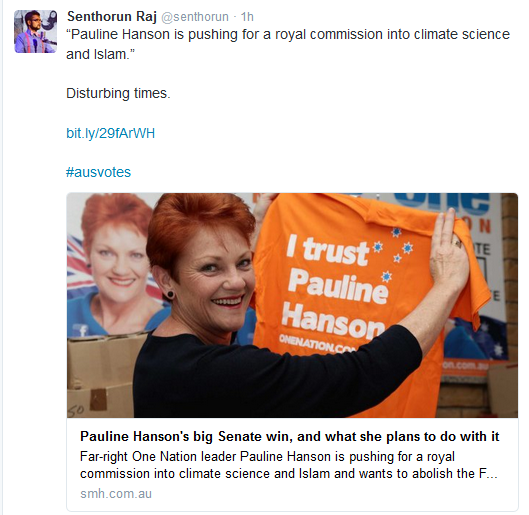 On the importance of health 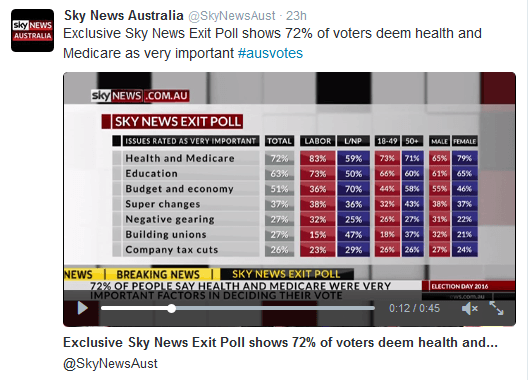 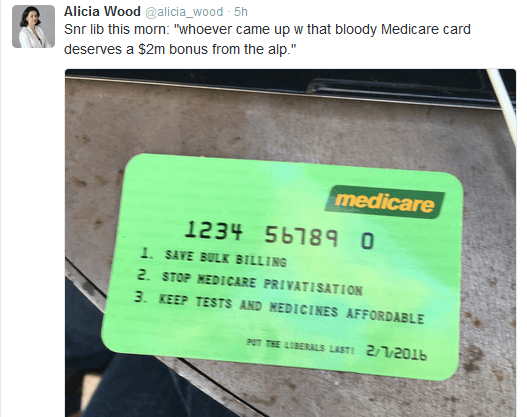 PrevPreviousIf health decides your vote, then why would you give it to the Liberal – National Party Coalition?
NextEveryday Closing the Gap: “A person’s Aboriginality should not be more important than their individuality.”Next