The multiple health impacts of climate change have been well documented in scientific and medical literature. However, less well studied has been the potential impact of increasing temperatures on the health workforce.

According to a new study reported in The Lancet Planetary Health, this impact could be significant, resulting in serious workforce shortages which exacerbate existing health, economic and social disadvantages in rural and remote communities tht are already disproportionately affected by climate change.

The study, summarised below by Croakey’s Jennifer Doggett, was conducted by Dr Catherine G Pendrey, Dr Simon Quilty, Professor Russell L Gruen, Professor Tarun Weeramanthri and Emeritus Professor Robyn M Lucas. It is based on a survey of registered practising medical professionals working in the Northern Territory during November, 2020. 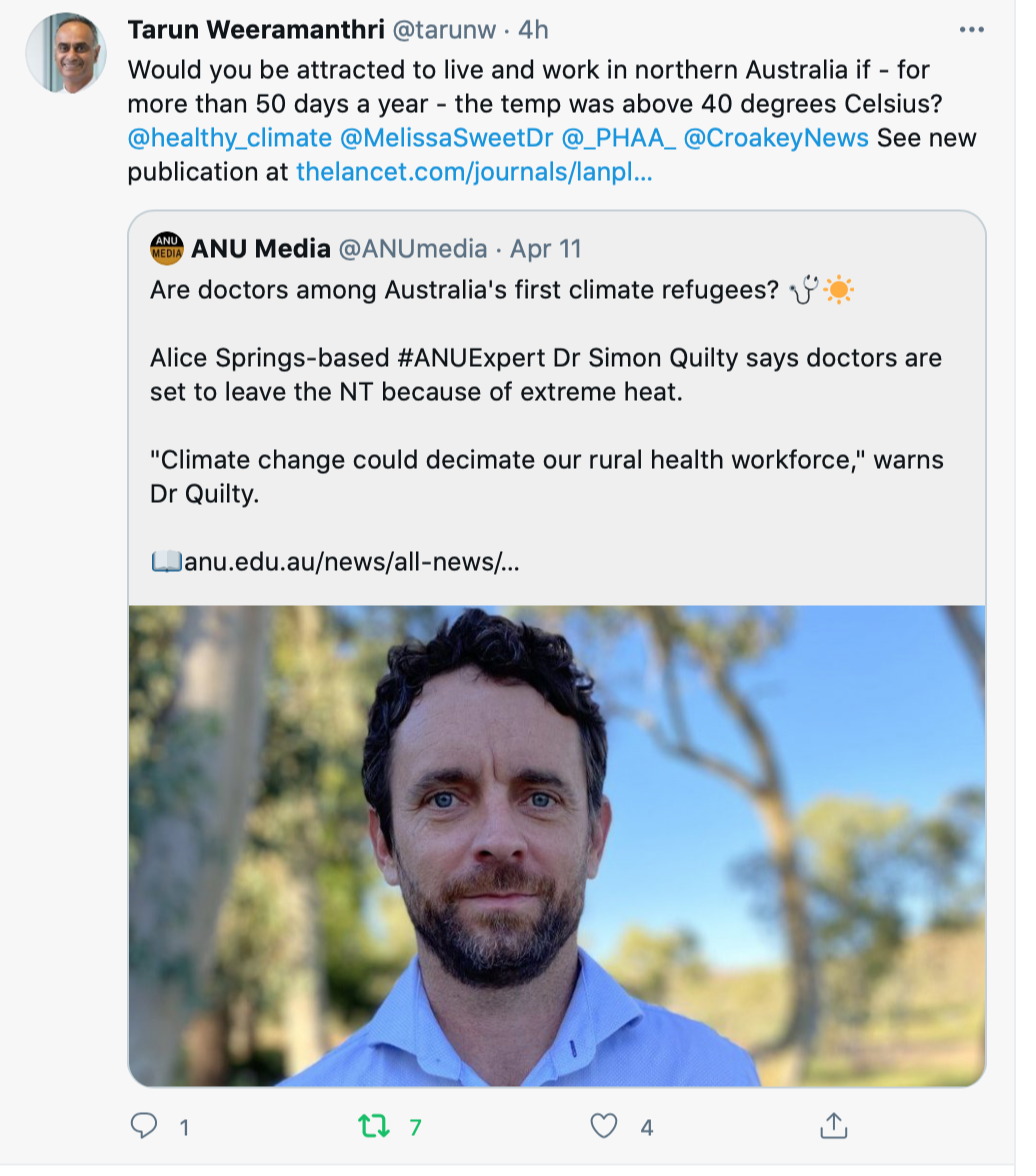 This study aimed to assess medical professionals’ perceptions of climate-related health effects and investigate whether climate change is affecting their intentions to stay in the Northern Territory.

The NT was chosen as a location for the study due to the heightened impact of climate change there, including extreme heat, water insecurity, and violent storms.

For example, in 2019, Katherine, the third largest town in the NT, recorded 54 days of temperatures above 40°C, extreme heat that is associated with considerably increased morbidity and mortality.

The researchers hypothesised that this increasing heat could make working in the NT less attractive to health professionals.

The survey was completed by 362 doctors, around a quarter of all medical professionals working in the NT at that time.

Responses to the survey also indicate that climate change is already causing, or is likely to cause, an intensification of environmental health stressors through more extreme heat events (92% of respondents), more extreme weather events such as floods and cyclones (90%), rising sea levels threatening coastal communities (90%), more severe bushfires (90%), and water shortages (84%).

Over a third (34%) of respondents reported that climate change is already causing, or likely to cause, them to consider leaving the NT.

Based on these responses, the researchers conclude that the vast majority of doctors in the NT perceive that the effects of climate change are already having serious adverse effects on local health, and causing a large proportion of them to consider moving elsewhere to work.

They argue that out-migration to cooler climates is a likely response to worsening heat stress, given that this is an option available to doctors, who generally have the financial means and ability to relocate.

This is concerning as if even small numbers of medical practitioners leave the NT, it would increase existing healthcare workforce shortages, staff turnover, and reliance on short-term staff which would lead to less effective care, higher hospitalisation rates, and higher costs.

The authors cite research demonstrating that climate change is a driver of migration within and between countries. Given the mobile nature of the professional medical workforce, they argue that there is a high probability that increasing temperatures in already hot zones could lead severe health-care workforce shortages, especially for disadvantaged populations.

On this basis, the authors recommend that healthcare workforce supply should be considered in climate-related health risk assessments and adaptation strategies, and climate-related concerns should feature in the national health workforce strategy.

The paper also makes the point that a comprehensive National Plan for Health and Climate Change (as proposed by the Climate and Health Alliance) would help address the challenges faced by remote and Indigenous communities, who are at particular risk, and by the workforce that supports their health needs.

This article is published as part of Croakey’s contribution to the Covering Climate Now initiative, an unprecedented global media collaboration launched last year to put the spotlight on the climate crisis, of which Croakey Health Media is a member.

It is co-founded by The Nation and the Columbia Journalism Review (CJR), in partnership with The Guardian.

PrevPreviousOverhaul water policy development, for the sake of our health
NextThe best hope for fairly distributing COVID-19 vaccines globally is at risk of failing. Here’s how to save itNext