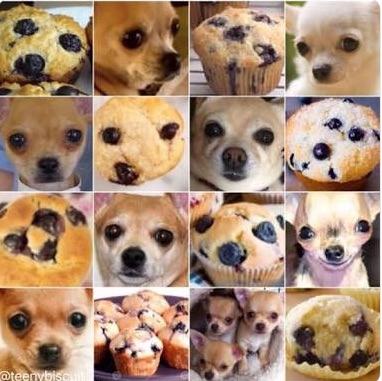 Healthcare, on the edge with artificial intelligence

Bots mining the data records of millions of patients to refine your diagnosis; voice-to-text intelligent electronic medical records that build a file, suggest tests, and offer differentials while you see a patient in real-time; even a ‘digital doctor’ that can – with the help of a few simple devices plugged into a smartphone – run an entire consult right down to the dispatch of a script to the nearest pharmacy.

It sounds like the stuff of science-fiction, but these are all capabilities coming onto the market right now in health care, where big data, processing power and data science technology are presenting an “exponential convergence” that promises to transform medicine, emergency doctors heard at a recent summit in Perth.

Dr Martin Than, director of research at New Zealand’s Christchurch Emergency Department, captivated delegates to the 35th annual scientific meeting of the Australasian College for Emergency Medicine with his keynote ‘On the Edge of Artificial Intelligence’, which explored the potential of big data, machine learning and deep learning in patient care.

As a discipline defined by “the art of making rapid, vital decisions with incomplete information” on the frontlines of health, emergency medicine stood to reap significant benefits from advances in AI, Than said.

Rather than replacing the doctor, he said augmenting clinical practice with smart technologies would offer physicians more time with their patients, allowing greater focus on the people and humanity at the core of their work.

It would also increase job satisfaction by decreasing routine tasks and elucidate data signals that were, at present, opaque.

As with every new development, Than cautioned against the ‘hype cycle’, in AI, and said doctors needed to be vigilant about remaining patient-centred and to be aware of the biases inherent in and entrenched by these technologies, including human prejudices programmed into their algorithms and within the data fed into their learning.

Though Than didn’t explore this in his talk, so-called ‘black box’ machine learning models rolled out in the United States criminal justice system have been shown to be biased against racial minorities.

Than’s AIMed article has some interesting commentary on bias in healthcare AI and why it’s such an issue, and there are other important perspectives here and here.

This in-depth piece on the problems plaguing IBM’s much-touted Watson supercomputer in medicine is also worth a look, as is Siddhartha Mukherjee’s longread in the New Yorker, ‘AI versus MD’. 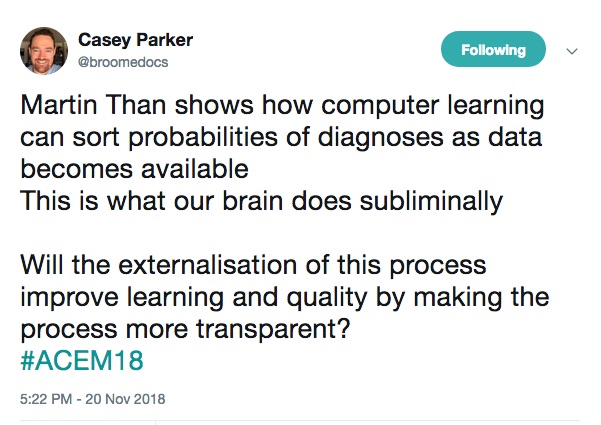 As a profession constantly engaged in the process of weighing up probabilities, Than said emergency medicine’s engagement with machine learning and big data seemed logical, outlining roles for AI at several points in the patient journey.

Far from a futuristic fever dream, Than said AI was already being rolled out in health, walking the audience through a host of apps and platforms already being trialled or in use. 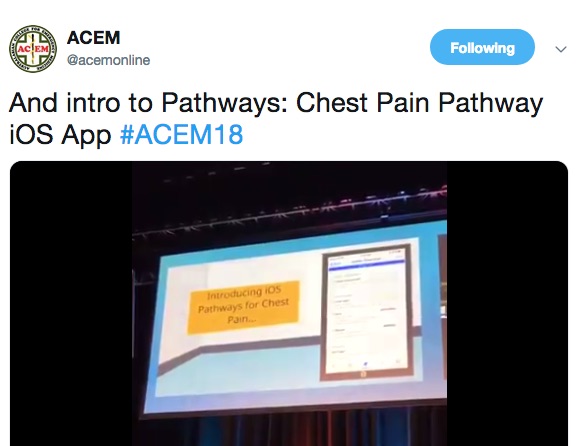 Microsoft’s EmpowerMD project was another – an intelligent medical records system that transcribed and sifted data gathered in a patient consult in real-time, singling out important themes, differential diagnoses and investigations for the doctor as they spoke.

By feeding back which suggestions the doctor had accepted for integration into the record at the end of the consult to the platform, EmpowerMD evolved with every new encounter, Than said.

From his native New Zealand, Than shared some work at the forefront of AI, including EMR-interfacing apps for use by clinicians at the bedside by local company Smudge Apps, which has developed a similar system for NZ Police to use out on the job. Than said the OnDuty suite, which includes an award-winning app designed for use in domestic and family violence callouts, was enormously popular with officers.

Captivating the audience were Soul Machines’ deep learning project BabyX and the Digital Doctor Healthcare Assistant – a virtual physician who was, with the assistance of a smartphone-compatible stethoscope, thermometer and pulse oximeter, able to run a consult and examination from start to finish, right through to signing off a script and transmitting it to the nearest pharmacy for collection.

The Digital Doctor, a freakish facsimile of a human, thanks to the involvement of Oscar-winning Planet of the Apes, Avatar and King Kong visual effects guru Mark Sagar, was even able to interpret facial expressions by a patient and offer reassurance.

Such technology had great potential for rural and remote areas, particularly in developing countries like India, where availability of health care was poor but most people had access to reliable high-speed broadband, Than said. 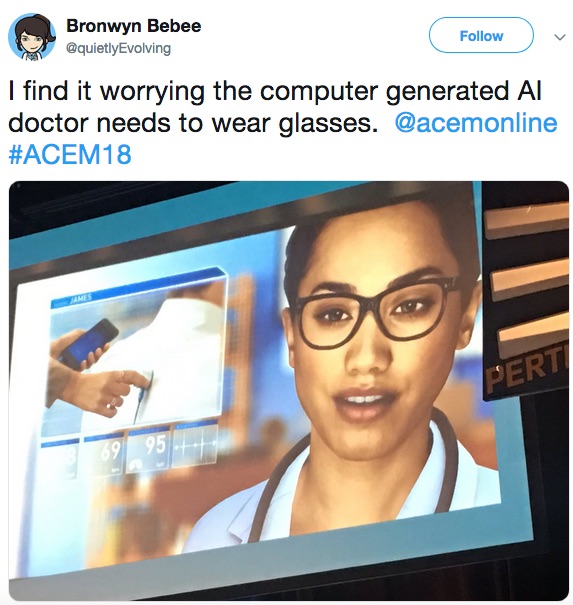 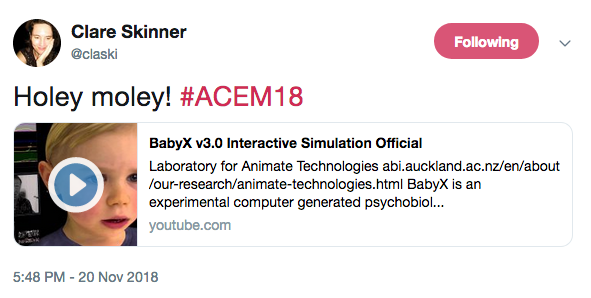 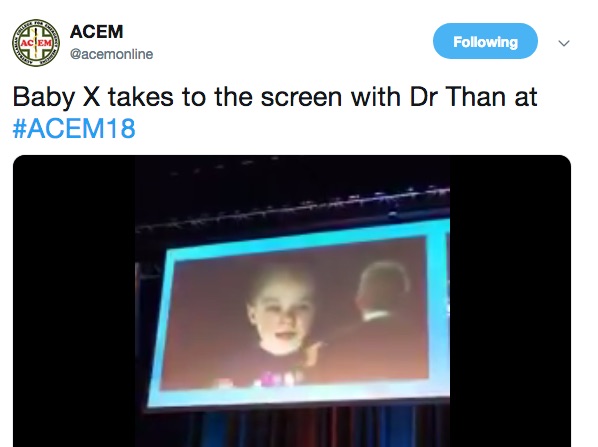 Machine learning had already made significant inroads in specialties like radiology and dermatology – two disciplines predicated on carefully honed pattern recognition – and Than said it had also seen successes in fields like critical care medicine (heavily rooted in and reliant on data outputs) and medical administration (looking at indicators such as length of stay and readmission).

All of these had structured data in common; by contrast, the vast majority (80 percent) of medical data was unstructured and, at present, much more complex to navigate, he added.

Data science startups like Kaggle and Harvard-based Experfy were available to crunch large medical datasets, and Than said some were able to work on this information within a host-controlled sandbox so that sensitive patient data remained onsite.

He acknowledged that privacy, confidentiality and ethical conundrums needed to be addressed as technologies advanced but said he did believe these barriers could and would be addressed.

Machine learning was far from perfect, he cautioned.

Machines were as yet unable to differentiate a blueberry muffin from a chihuahua – something even a four-year-old human could do – and mistakenly identified Manet’s 1856 masterpiece, Olympia, as a burrito. 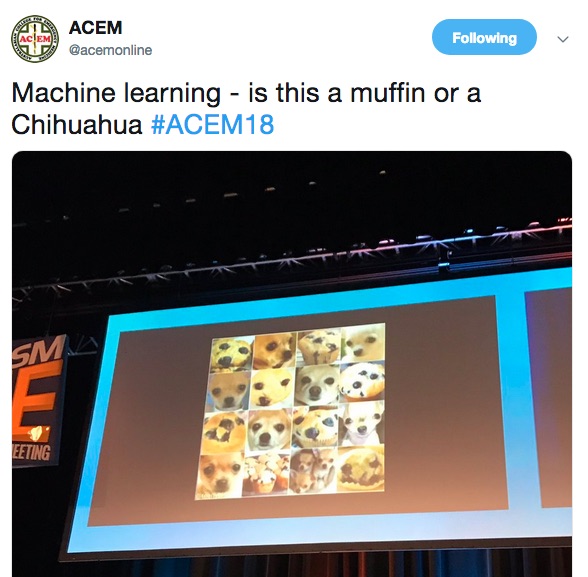 Like other sectors on the cusp of big data integration, Than said there were major challenges for health. He characterised these as ‘The 5 Vs’ – volume, velocity, variety, veracity and value — of which he said veracity was probably the most significant.

While it was lagging parts of the healthcare sector such as risk analytics, lifestyle management and monitoring, imaging and diagnostics and drug discovery, Than said emergency medicine was slowly catching up in AI terms.

In response to the “stampede” of tech giants like Apple and Google into the space and proliferation of proposals, the British government had drafted an NHS code of conduct for AI and other data-driven technology, and Than said Australia and New Zealand needed something similar.

Most important, he said, was the maxim conjungere ad solvendum, ‘connect before solving’. This didn’t mean connection to technology, but the step that came before: interrogating the purpose, intention and benefit of a technology before rolling it out.

Failure to connect at this fundamental level was what underpinned the deep unpopularity of the detested electronic medical record, identified earlier in the conference as a key ingredient in physician burnout, Than said. No doubt a criticism, on this logic, that could also be levelled at the Australian Government’s troubled My Health Record project. 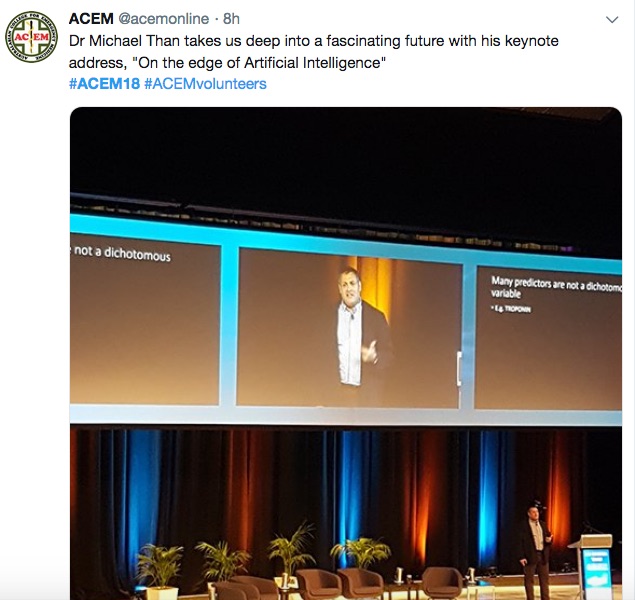 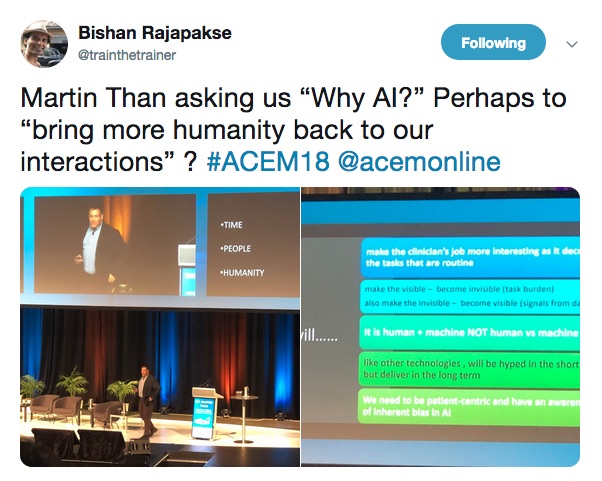 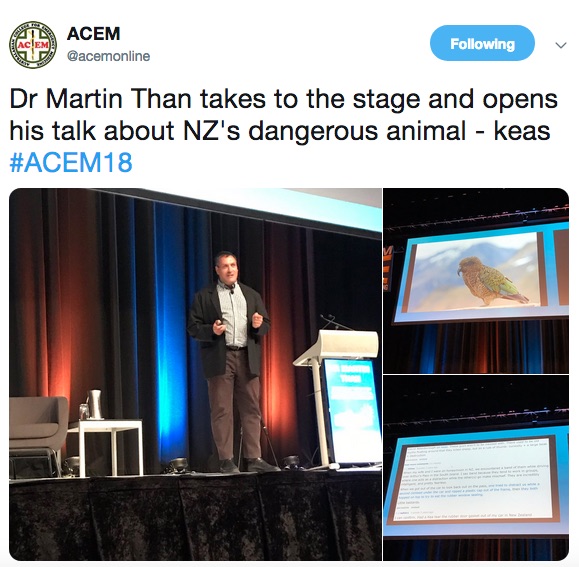 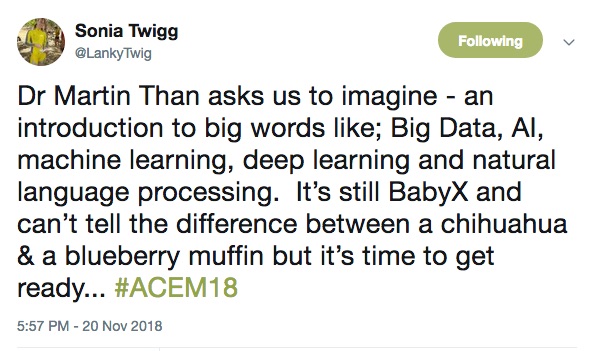 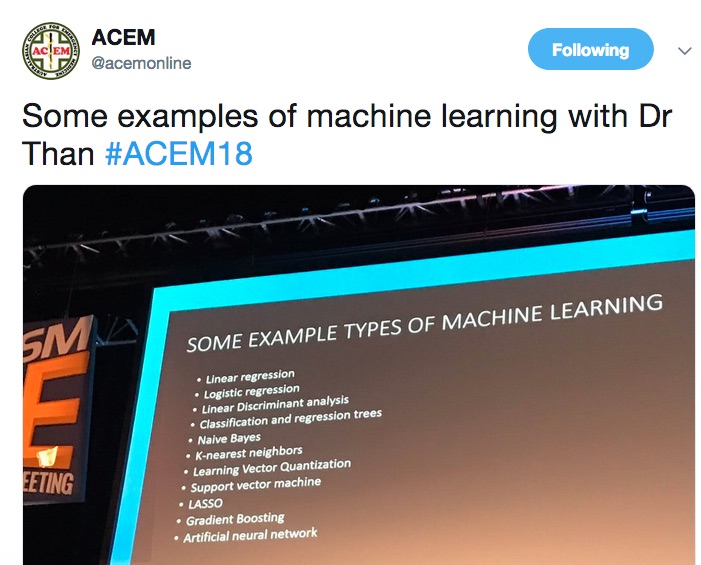