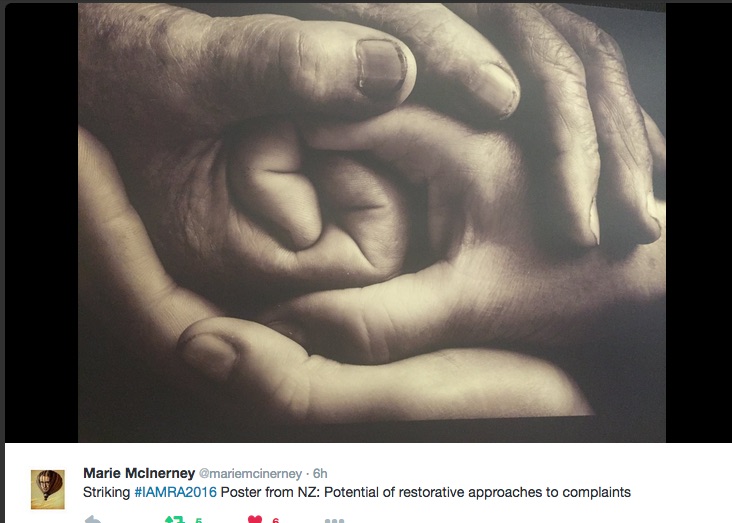 Healthcare regulators urged to give patients a greater stake

Consumers who lodged complaints about doctors to Australia’s healthcare regulators were “generally unhappy” about the process because they were seen and treated as an “informant” rather than a participant with a stake in the outcome, according to new research findings.

The research and other reviews have already led to changes in Australian Health Practitioner Regulation Agency (AHPRA) processes, and will strengthen calls for national law reform to enable complainants to be given more information about the results of their complaints.

Croakey has been asked to not include specific figures until the research publication, expected in early 2017, but Walton said generally complainants reported that the processes were too slow, they didn’t get enough information, and the outcomes were way short of what had been expected, if they got to hear about them at all.

“Of those (the majority) that don’t continue on to some formal serious outcome, the complainants don’t understand why, they’re not given that information, there’s no transparency around the decision making,” she said.

The in-depth study is one of five research projects being conducted by Walton and her team at the University of Sydney, funded by an Australian Research Council Linkage Grant in partnership with AHPRA and two New South Wales bodies that manage complaints in that state: the Health Professional Councils Authority (HPCA) and the NSW Health Care Complaints Commission.

It has taken place in the context of major scrutiny of Australia’s regulation system (see the slide at the bottom of the post).

The much-awaited consumer research surveyed every complainant or notifier whose cases were completed by those bodies between 1 July 2013 to 30 June 2014. They were asked about their expectations and experiences, why they had made their complaint, what happened, and what they would like to see changed about the process.

For confidentiality reasons, complainants were invited to join the survey by the agency involved, but were able to respond directly to the researchers if they preferred.

Whose stories are being heard?

Walton, who is Professor of Medical Education (Patient Safety) at the Sydney School of Public Health at the University of Sydney and a member of AHPRA’s management committee, said the issue is not confined to Australia.

Most medical regulation systems across the globe were designed so that consumers or complainants “step aside” once a complaint or notification is received, while the medical practitioner remains more fully involved, she said.

“They were just generally very unhappy about the little information they were provided, the outcomes they would expect but didn’t receive, but also they think that the weight of their story, the narrative of what happened to them, wasn’t a major consideration,” Walton said.

The findings underlined similar issues raised at other sessions at the conference that consumers often felt their issues were “unanswered or unaddressed” and ongoing accusations that regulators act more often to protect the profession than the public.

One presentation heard that the disconnect can just come down to medico-legal terms. The Northern Territory Board of the Medical Board of Australia reported on its analysis of “No Further Action” findings to complaints, which account for about 70 per cent of cases.

Some may follow serious investigation and may have already involved education, training and/or internal restrictions for the practitioner, but they are read as “No Action At All” by consumers, Board Chair Dr Charles Kirkland told delegates.

Shifting the balance of power

Walton said the research team had been providing the results as they came in to the regulators, which were already taking steps to resolve issues, such as speeding up resolution of complaints. However, much of what they can reveal to complainants is currently restricted by law.

AHPRA Chief Executive Martin Fletcher told Croakey the research would point the way to additional reforms, but he said AHPRA had already made improvements in the years since the processing of the complaints that were studied as part of the research.

These improvements included tracking feedback from consumers through the process, the pilot of a Notification Liaison Officer in Victoria (which may be rolled out nationally), the establishment of a Community Reference Group, and setting out recommendations to Australia’s Health Ministers on law reform so complainants can be given more information.

“It’s often very important to have a front-end conversation with a notifier, to clarify what they are expecting and what we can do as a regulator,” he said. “We’ve not solved the whole problem but we’ve made good progress.”

The conference heard that national regulators have varied but increasing public and consumer representation on their boards – ranging from 4 out of 28 on Hong Kong’s regulator, to making up one-third in Canada, and a lay majority in Ireland.

Walton said the early question to emerge from her work was: How does Australia’s medical regulation system shift so it gives equal weight to the narrative and experience of complainants as it does to medical service providers?

Motivated by concern for others

Presenting a breakdown of the research, PhD candidate Suzanne Pierce said most complaints were about care and treatment (such as that it was inadequate, or diagnoses were wrong), followed by conduct (aggressive, unprofessional, inappropriate), medication, and then about responses to first complaints – often none or hostile.

Interestingly, and this too was a common theme at the conference, the research found that most people made formal complaints because they felt what happened to them was wrong, unfair, unjust or unsafe – but also because they wanted to make sure it didn’t happen to someone else.

They were not only looking for specific redress for the practitioner involved – such as  disciplinary action, supervision and monitoring  ­– but also to influence system change, including where some thought the practitioner was rorting the system.

And what they most wanted for themselves was an apology, acknowledgement, and explanation.

The reality was far different: the majority did not believe or did not know whether their issues were addressed (around 60 per cent of complaints resulted in ‘No Further Action’), nor whether they had resulted in any improvements to practice or the system.

If there was an apology, it was often considered not sincere or sufficient, or that it came from “someone else”, not the practitioner in question.

Walton said the next step will be to consider recommendations, such as: “Do we show them the doctor’s reports, do we have face-to-face interviews, how do we involve them in an investigation and, at the end of it, what role do they have in terms of restorative justice?”

The conference also heard of initiatives in other jurisdictions trying to address similar issues, including where there is face-to-face contact between complainants and the General Medical Council in the United Kingdom at the beginning and end of an investigation.

GMC chief executive Niall Dickson told the conference these initiatives have been “an enormous success”, although he hinted to unhappiness with the results of investigations by observing that the meetings at the start were “fantastic”, and those at the end “slightly less so”.

Kathleen Haley, Executive Director of the Oregon Medical Board in the United States, described a “wake up call” it had got 20 or so years ago, when a gynaecologist had been found to have sexually violated more than 100 patients. The Board invited all of the patients to come in, at their convenience, and tell their stories. Many did.

“From that point on, whenever there is an issue of credibility, whether it be sexual misconduct or something else, one of these ‘he said she said’ issues, we invite the complainants to come in and tell the Board their story,” she said.

It’s been, she said, both moving and effective although she said the board probably lacked the resources to expand that to broader complaints.

Haley said her Board was also constantly revising its communication tools, to see if they were “patient friendly”.

But the whole basis of regulatory communication may have to change, according to Alan Kirkland, CEO of CHOICE, who talked at another session about consumer frustrations with systems that are still based around written complaints and lengthy legal processes.

It is counter to the way that consumers expect businesses these days to respond to complaints, he said.

“They want much more human engagement, and that’s going to be an enormous challenge for complaints regulators,” he said. 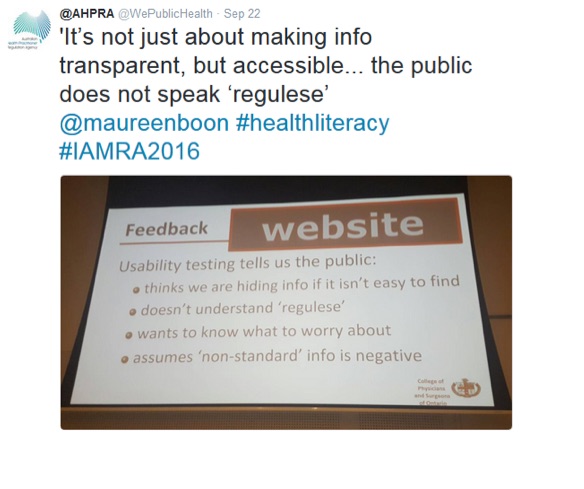 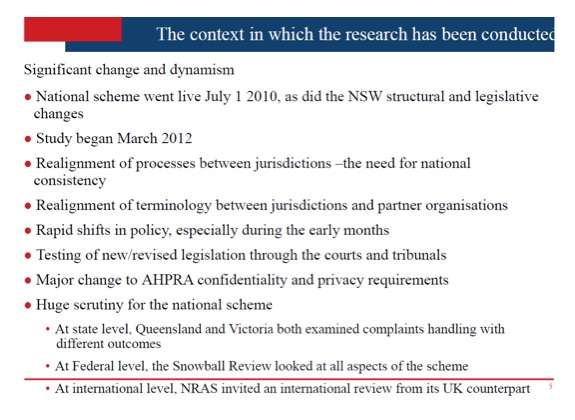 • Journalist Marie McInerney is covering #IAMRA2016 for the Croakey Conference News Service.
• Bookmark this link to follow the coverage.

PrevPreviousHealth sector urged to step up and engage with welfare reform debate and processes
NextA health assessment of welfare reforms: likely to be “politically popular, but ineffective and potentially harmful”Next