HealthElection16 checkup part2: what can we learn from “screening” Labor and the Greens on health policy, promises?

This is the second part of a detailed “health history” of the major parties that looks at both their promises and past performance.

In the first post, Croakey asked a range of health experts ato take a detailed “health history” of the Abbott/Turnbull Government to inform what we can expect of its performance in future.

In this post, they “screen” Labor and the Greens to see how healthy they might be for the country by comparison.

Q4: What does Labor’s health history tell us to hope for or to watch out for?

They brought us Medicare and were looking at new forms of governance with the states. They established a prevention agency (gone). They brought us plain packaging of tobacco. They had a serious interest in policy.

Hospital funding past 2020 is not clarified in Labor’s health platform. Their pledge to establish an Australian Healthcare Reform Commission could herald a return to more effective collaboration with the states and territories, similar to that which led to the 2011 National Health Reform Agreement. However, the specific focuses of the merged entities should not be diluted and independence in the pricing of hospital services must be maintained. It will also be important to ensure that models implemented are sustainable in the long-term, both financially and taking into account changing demands for health services.

The preventive care strategy announced this week is welcomed, and builds on work of the now-closed Australian National Preventive Health Agency.  It is a refreshed vision, which takes a broad approach to prevention.  Unclear in this strategy, or elsewhere in the Labor health platform, is their intention regarding prevention and health promotion strategies for Aboriginal and Torres Strait Islander peoples, although there has been strong support for Aboriginal community-controlled care.

The need for evidence to set targets – Close the Gap and its targets are not based on sound data, analysis or advice.

We must continue to question why Labor and other parties refuse Medicare for prisoners. Currently available prison health care falls short of health care in the community; such equivalence of care is a right of prisoners.

In Opposition, Labor has worked hard to develop a suite of policies that runs the gamut from prevention to boosted primary care, mental health reforms, suicide prevention and increased hospital funding. These have highlighted the paucity of the Government’s policy portfolio and for the most part have been well received, albeit with valid criticisms about lack of details and funding limitations. Importantly, they have served to push the Government into policy flip-flops and deals on a range of issues, including bulk billing incentives for pathology and diagnostic imaging and (apparently) continued support for headspace and early psychosis programs.

Labor’s most important policy contribution may well turn out to be the recommendation for the establishment of a permanent Australian Healthcare Reform Commission, reporting to COAG,  which would include a new Centre for Medicare and Healthcare System Innovation. Such a proposal holds the possibility of making real system reforms possible by isolating them from the electoral cycle and involving all levels of government.

More of the same. Not a lot of difference in major party platforms.

To its credit, Federal Labor has had a very good health history and proven track record of injecting much needed increased funding into public health and hospitals, in contrast to Federal Coalition Governments.

Labor was responsible for initially setting up Medicare and is now treating the current Federal Election as a referendum on the maintenance of Medicare. Labor has recently promised to not only restore significant funding for public health and hospitals, including Aboriginal health programs, that was considerably cut by the Coalition Government, but  has also promised to maintain Medicare as a public funded health insurance system, in the best interests of all Australians.

Labor’s strong (at least in rhetoric) commitment to Medicare and its underlying values of equity and universality indicate that it will take a broader and longer-term view of health compared to the Coalition and focus more on strengthening and preserving the public health system.

Its reformist history in the health sector (the PBS, Medicare, the National Healthcare and Hospitals Reform Commission) together with its policy to establish an independent, permanent body to embed reform within the health system promise a much more informed and evidence-based approach to equipping our health system to meet future challenges.

Labor has made Medicare the centerpiece of its election campaign not merely because it pioneered Medicare – one of the most potent “brands” in Australian politics – but because it rates highly as an essential government program among consumers. Like the Coalition, Labor’s recent history has shown that it, too, has the propensity to commission large scale, ambitious reviews. Rudd’s National Health and Hospital Reform Commission was one of the most wide-ranging in recent history and generated ideas for reform on several fronts.  The thing with reviews is that they raise expectation that action will follow.  Labor did deliver some significant reforms such as activity based funding for hospitals, which are having an effect, but too little in the way of systemic change needed to ensure Medicare meets 21st century needs such as chronic health care.

Labor’s promises to end the Medicare freeze and reverse Government cuts to payments for pathology and diagnostic imaging are welcome and will do much to ensure access to important front line services in the short term. Their commitment to a prevention agenda is strong, recognising this is not the ‘soft’ end of health care, but an area of investment on the same footing as the need to bolster our primary health care system.

Whatever government we have post election, they will  face pressure to balance and deliver on the more substantial reforms needed to ensure Australia’s health care can deliver better bang for buck in order to maintain universal access to health care along with the challenges of guaranteeing health system sustainability. 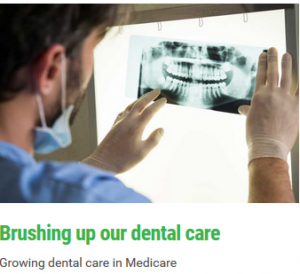 Q5. What have been the main contributions of the Greens to health policy under the previous Coalition and Labor governments?

I’m struggling with this question. The Greens made a significant contribution to medicinal cannabis.

The Greens have held the major parties to account with a strong focus on support for appropriately resourced primary and acute care, preventive health and oral health, as well as universal healthcare principles. Their commitment to a fair and equitable health system is complemented by a strong case for greater collaboration with the states and territories. Their voice has been important in ensuring the policy debate focuses on better health care for all Australians, and that health is seen not just as a funding measure but as a human right.

The Greens developing their policies, advocacy and visions regarding the connectedness of individual and community health to environment, and therefore to risks with fossil fuel mining and the need for renewable energy sources.

And, the role Indigenous peoples’ knowledges have in designing solutions for the future.

This election seems certain to elevate the roles of the Greens and Independents in the parliament. The Greens deserve credit for a continuing focus on the importance of dental health. Hopefully in the next parliament they will also be a voice for the need to address the health impacts of climate change.

The Greens have been vocal supporters of Medicare and advocated strongly against Coalition attempts to reduce its universality, such as the proposed GP co-payment. They have also been strong advocates for action in key areas of the health system, such as mental health and dental.  They have effectively used the Senate Estimates process and various Senate inquiries to promote their agenda in health and to expose areas of weakness in the major parties’ policies. When in a balance of power position they have negotiated legislative changes which reflect their commitment to an equitable and universal public health system.

The Greens have provided thoughtful ideas and support for progressive health policies in areas including primary care, prevention and dental health.  The Greens play an important role in providing a “third voice” in the health debate that is not as swayed by the interests of powerful providers.

Again Croakey thanks all the contributors to this article for sharing their thoughts and expertise.

PrevPreviousHealthElection16 checkup part1: what can we learn from a ‘health history’ of the Abbott/Turnbull government
NextCAHA election scorecard: Ignorance of climate-health risks among major parties “putting lives at risk”Next