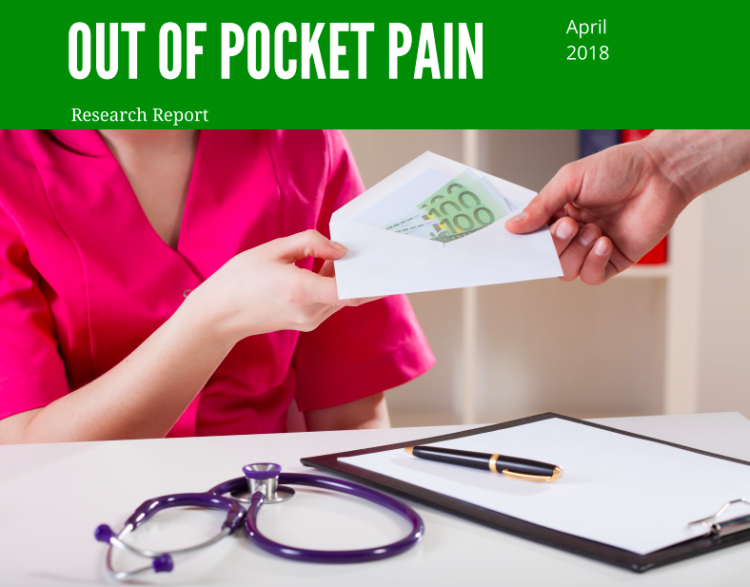 Hear our pain: Out of pocket costs and private health care in Australia

The Consumers Health Forum of Australia recently published the results of its survey on  Out of Pocket Pain which drew 1,200 responses.

It said that the survey report Out of Pocket Pain and a companion report Hear Our Pain (containing scores of personal stories of people’s experience with treatment costs) “provide a disturbing insight into the high costs of medical care and challenge the notion that everyone can access the care they need in Australia.”

In a statement releasing the reports, the CHF said it conducted the survey to provide a strong consumer perspective to the Federal Government’s expert committee chaired by Chief Health Officer Brendan Murphy which is examining out of pocket costs.

In the post below, CHF CEO  Leanne Wells outlines the main findings of the survey and its policy implications, and responds to criticism, particularly from the private health industry, of the methodology of the survey.

Her post was originally published at John Menadue’s Pearls and Irritations blog and republished here with permission and our thanks.

See also some snapshots from the Hear Our Pain report included below. 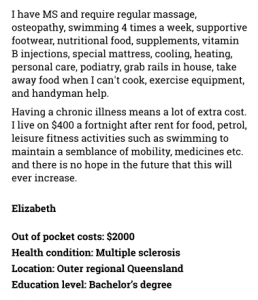 Pensioners and low-income earners, who still cling to their health insurance cover, found they could not afford the private treatment they had put by for over the years — despite ever-rising premiums — because of the gap costs that going private exposed them to.

There were women whose shock at learning they had breast cancer turned to desperation when they realised the treatment and scans recommended by their doctor would cost their meagre means so dearly.

Besides often high costs, it was the significant impact on people’s lives and lifestyle, and the unexpected and confusing nature of why and how out of pocket costs were imposed.

The daunting expenses so many faced seem often to fall randomly. While some might pay nothing, others paid $5,000 in gaps for the same or similar procedures.

There is an unsettling lack of reason or conformity to the way the private health system interplays with the public system. Diagnostic imaging which is recommended for many breast cancer patients is not covered by Medicare or health insurance.

Many patients are counselled by medical specialists to take the more expensive private option because of long delays in the public system.

Meantime the private healthcare market, where profits appear to come before patients, powers on. Publicly listed health funds earn high profits while their revenue from premiums often rises faster than the benefits they pay out to their members, according to APRA data.

Specialists charge fees that are often beyond the reach of people without health insurance and often stretch those with private cover.

The growth in health fund membership this century, although now turning down somewhat, has failed to deliver, as promised, an easing of strains on the public hospitals. Indeed the opposite is occurring. Statistics released last year indicate more insured patients are using public hospitals and spend half as long as public patients on elective surgery waiting lists in public hospitals. 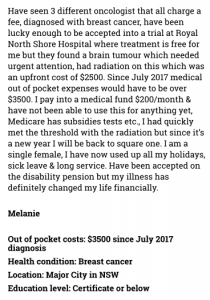 The distortion in supply and demand of surgical services, where now well over half of planned surgery is performed in private hospitals, is entrenching a two-tiered health system. The majority of Australians without insurance face lengthy delays for life-changing procedures like hip replacements and cataract operations.

Another disturbing element that comes into sharper focus after the release of the Out of Pocket Pain survey was the reactions to the patient experience by health funds or doctors’ groups.

The suggestion from Private Healthcare Australia to Out of Pocket Pain was that you had to be “a little bit careful” about the survey findings because the CHF had gone to member organisations “which are groups representing sick people and asked them to put in complaints about out of pocket costs”.

For the record, CHF did not ask sick people to put in complaints about out of pocket costs.

In our invitation to supporters, groups and to the general public across social media we stated that “Out of pocket medical costs are hurting a rising number of Australians” and that the Federal Government has recognised the community’s concern about this issue and has set up a committee to look into it.

CHF is the only representative of consumers on the committee. To strengthen the voice of consumers by presenting their experience with out of pocket costs, we invited people “to share your experiences by responding to the survey”.

Call them complaints if you must, but the patient experience is valid data.

As many commentators remind us, including those as diverse as the Interaction Institute and Oxford Professor Trisha Greenhalgh on a recent lecture tour of Australia, we can, and should, use stories as part of strategy and evaluation. In complex systems, stories become avenues for sense-making as well as means of capturing the diverse human experience in a system. Stories can provide qualitative data about how systems are changing and how they could be improved. 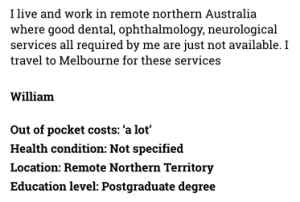 The experiences respondents shared in the survey indicate complex and troubling woes with our health system that require deep reforms.

We remain concerned that the key actors – the doctors, the private hospitals and the health funds – will be able to reach an accord in the interests of consumers. For now, they are all at the table on the many committees Minister Hunt has set up to examine and recommend policy change across a broad spectrum of private health issues.

That is why we are appealing to the Government to establish a Productivity Commission inquiry to investigate government assistance to health insurance and recommend changes to improve circumstances for consumers.

CHF has not advocated for the abolition of the health insurance rebate. However, we believe if it is to remain, it should be better targeted to policies that offer real value.

The public-private nature of our health system is complex and there are a mix of incentives at play that encourage the uptake of private health insurance. We believe that it is not ideal policy to have the debate about one of those – the rebate – in the absence of a wider look at the problem we are trying to solve by having private health insurance arrangements in the first place. We need to examine the contribution of the rebate to the future sustainability and stability of our health system.

This is why CHF was the first to call for a comprehensive Productivity Commission review. Overall, there needs to be much greater clarity and transparency about private health insurance costs and benefits.

We are looking for a robust public benefit test and evidence, as with all government spending, that the community benefits from that expenditure

It is important to have a thorough inquiry by the Commission and then take action based on its recommendations and the evidence it presents.