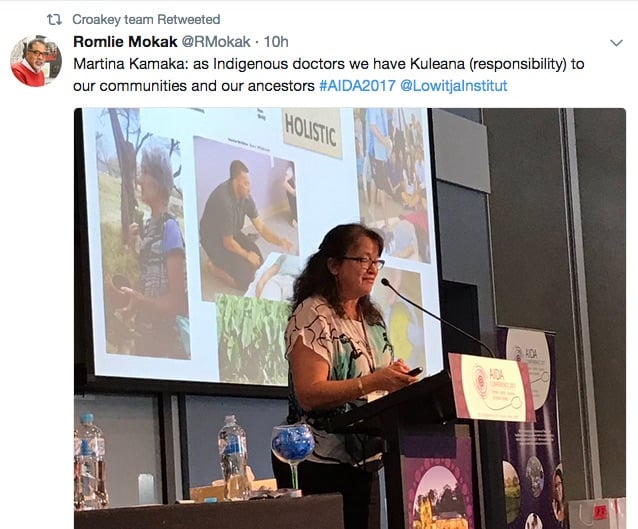 Federal Indigenous Health Minister Ken Wyatt has stressed the critical importance of listening to and working with communities to develop local solutions to improve the health and well-being of Aboriginal and Torres Strait Islander people.

In an address to the Australian Indigenous Doctors Association (AIDA) conference today, Wyatt also challenged medical colleges to do more to combat racism, which is widely acknowledged as harming Aboriginal and Torres Strait Islander patients and health professionals.

As writer and author Karen Wyld reports below for the Croakey Conference News Service, the connections and strengths of Indigenous peoples globally were evident at the conference, together with some of the similarities of the challenges facing them.

Wyld also reports that messages of hope emerged from conference discussions – not least with the news that Maori people are now graduating from medical schools in numbers proportionate to their representation in the population.

Themes of family, unity and culture dominated the keynote presentations at the AIDA conference today, as First Peoples leaders in health from around the globe shared their stories, with journalist and author Dr Jeff McMullen as MC.

The Honourable Ken Wyatt AM, Minister for Indigenous Health and Aged Care, shared some of his personal and professional journey in a keynote address, including how he once thought of becoming a doctor but was dissuaded from doing this.

Instead, Wyatt, who has broken many barriers in his career, became the first Indigenous person to be Minister for Indigenous Health, and had an impressive career before holding this position, including working in health and education. 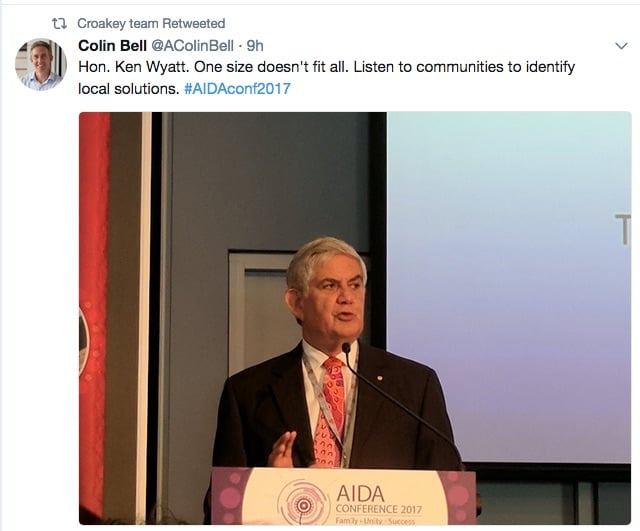 Wyatt outlined his strategic approach to Indigenous health, wanting his Department to respond to health disparities in an evidence-based way, but also listening to Indigenous voices. He stressed the importance of working with communities to identify local solutions and warned against “one size fits all” approaches.

Wyatt wants services to be provided where they are needed, saying “we have to do better.” When he visits communities, Wyatt sees a different story than the improved statistics provided to him by his Department. He sees stark signs of where services are not being delivered, where the inequities are not closing.

He stressed that we all need to have a role in creating change. AIDA, its members, and other doctors, need to use their leadership to influence change within the medical colleges. Like other speakers, Wyatt acknowledged the work that the colleges are doing, but stressed that more is needed.

He encouraged everyone to increase the uptake of health checks for Indigenous clients, to catch the markers of diseases earlier, and improve treatment outcomes. He wants the 0 – 5 years focus extended to include children up to 17 years of age, and believes this will prevent health problems developing, and also support youth suicide prevention.

Wyatt wants to see more Indigenous people reaching the age of 50, and enjoying a healthy old age. With a family-focused wrap-around model of care, Wyatt believes Indigenous health disparities could be turned around within a decade. 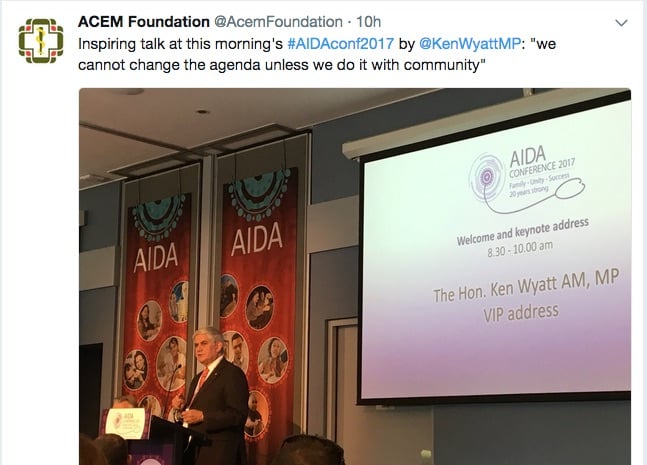 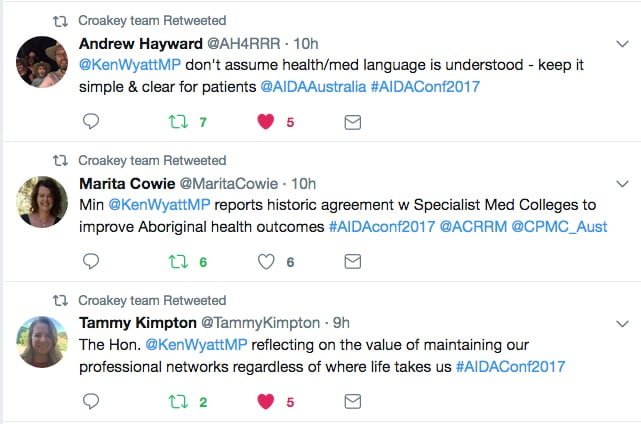 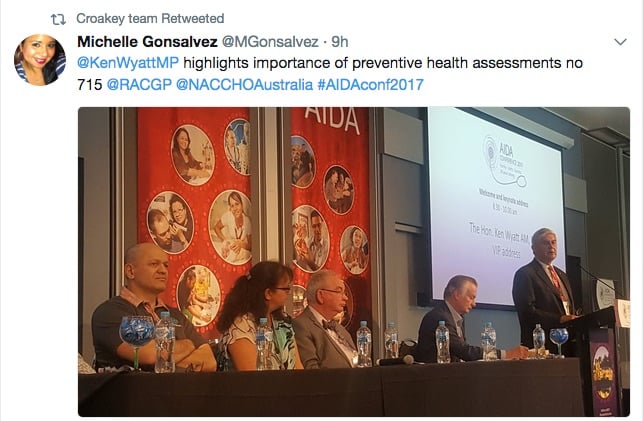 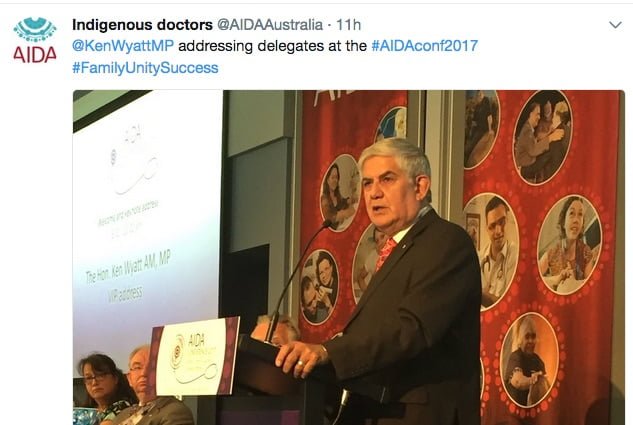 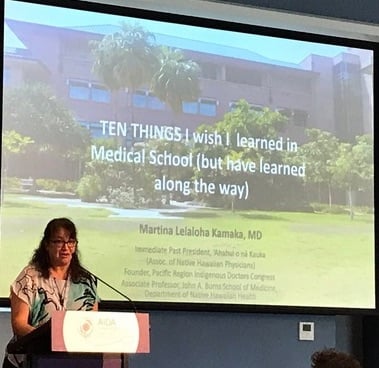 Dr Martina Kamaka, a family physician and Associate Professor in the Department of NativeHawaiian Health at the University of Hawaii at Manoa, John A. Burns School of Medicine, also shared stories from her own career pathway, as well as the need for medical schools and mainstream services to increase their understanding of why health gaps exist.

When studying medicine, she was told to be colour-blind but this did not make sense to her lived experience as an Indigenous woman in Hawaii. She was surprised how little her senior colleagues knew of health disparities amongst Indigenous people, and set about raising their awareness.

Kamaka spoke of a pivotal moment for her – meeting Dr Ngaire Brown and learning about AIDA. She realised the commonalities between Indigenous doctors, and the similar barriers they faced to improving health outcomes.

From this meeting, the Pacific Region Indigenous Doctors Congress was born. PRIDoC has connected many Indigenous doctors from many nations, allowing for sharing of strategies and models of change, as well as strengthening of cultures. 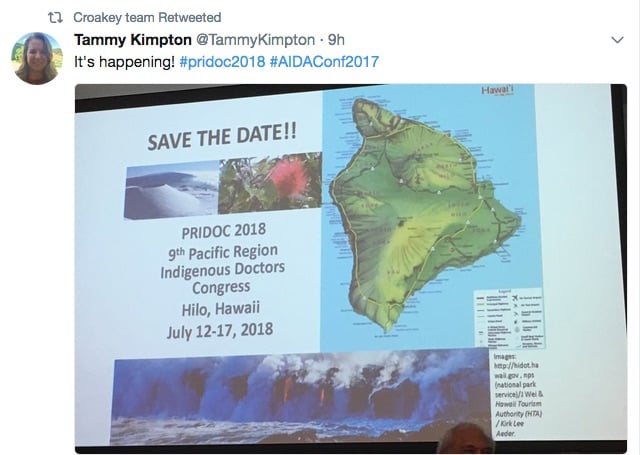 Kamaka shared a story she was given by an Indigenous grandmother in Canada – the prophecy of the white animals.

The white buffalo, the white giraffes, and other white animals that have begun to appear across the world, including the white whale off the eastern coast of Australia, are signs of hope – that change is happening, she said. 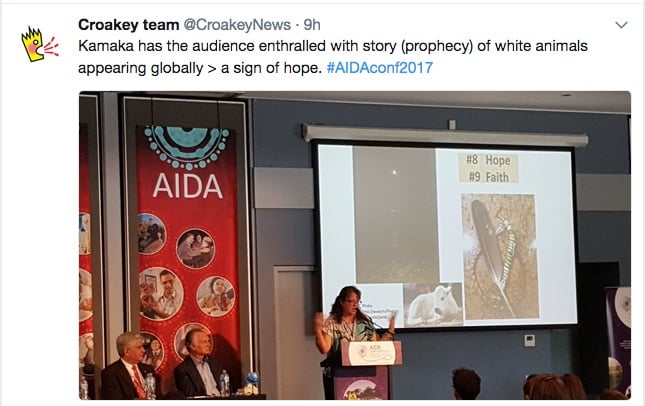 Ending her presentation, Kamaka left us with the gift of Aloha. 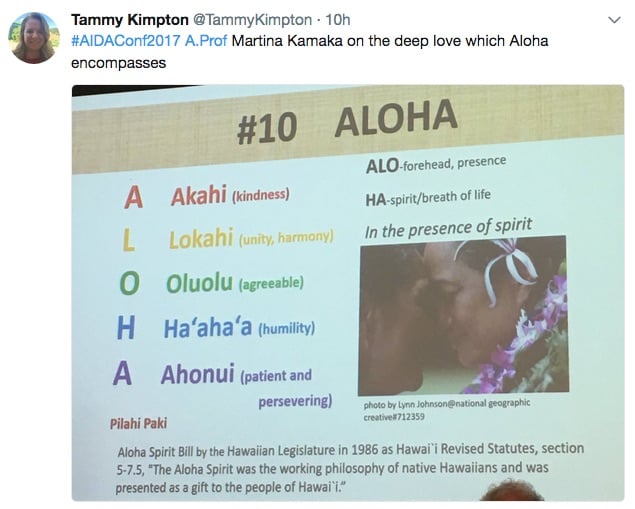 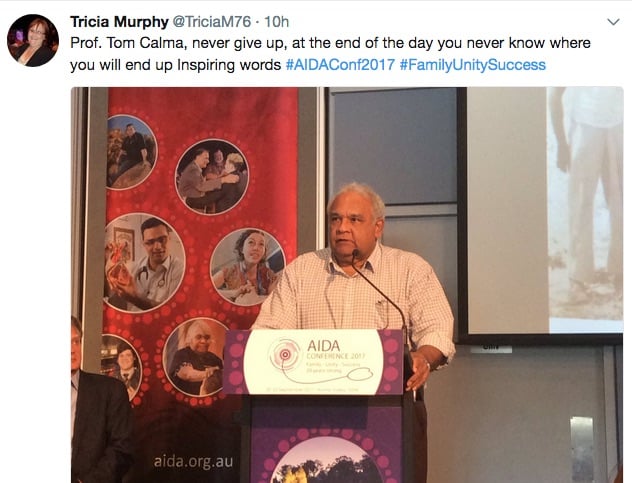 Calma, a Kungarakan and Iwaidja man with a long history working in health and the public sector, spoke of the importance of family, community, and growing leaders.

“Culture is central, and people are central,” he said.

He shared his reflections on past government strategies, and the creation of many Indigenous-led organisations. 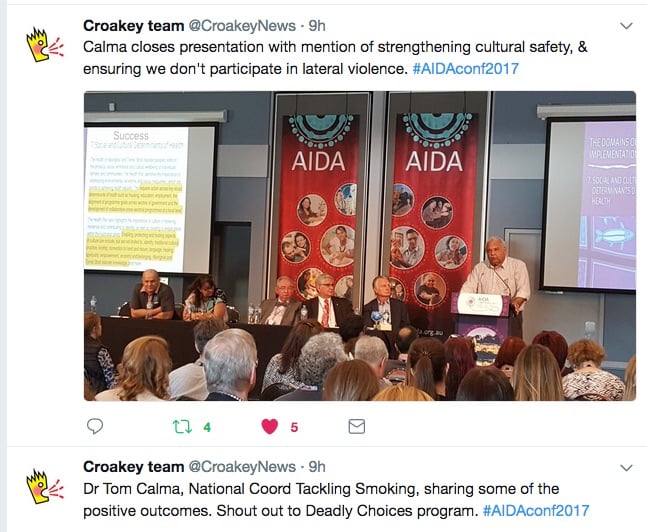 Everyone needs to contribute to change, not only Indigenous people and organisations. Dr Phillip Truskett AM, Patron and ex-president of AIDA, outlined AIDA’s strategic directions.

Truskett spoke of how partnerships between Indigenous peak organisations and health and medical schools are a key part of AIDA strategies, as well as the Association’s ongoing commitment to members and communities.

The morning session ended with family. Like Wyatt, Kamaka and Calma, the last speaker reminded us of the importance of family – Whanau. 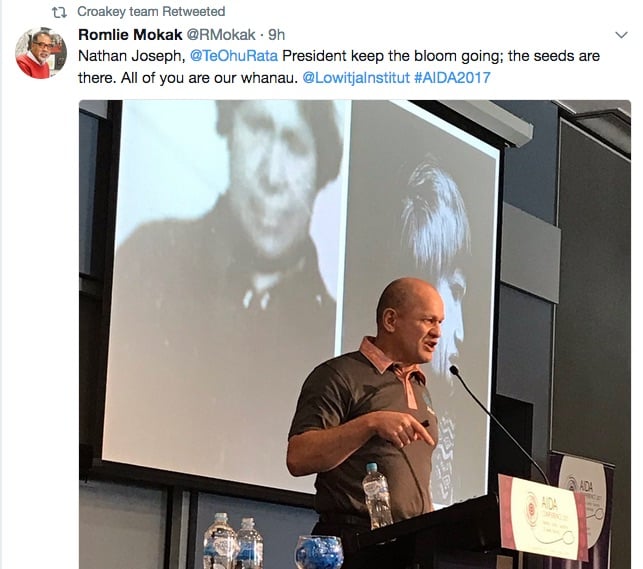 He talked of the resilience that has survived despite colonisation violence and intergenerational trauma, and the importance of knowing who you are, where you come from. He believes these are part of the tools that help us do the work.

From his father, Joseph learnt that you never give up, despite the odds.

He urged the younger delegates to know their strengths. He said: “You are loved. You are valued. Work your tail off but don’t give up.”

Taking his father’s advice has led Joseph to carve a career in medicine. And he has passed down these messages of family and resilience to his own son, who is studying medicine – creating yet more hope for the future.

Joseph showed an image of beautiful blooming wildflowers and said: “The seeds are already there, they just need the right conditions to grow.”

Family, knowing who you are, and being proud of culture and identity – these provide the tools to create greater equity for Indigenous peoples. There is hope. 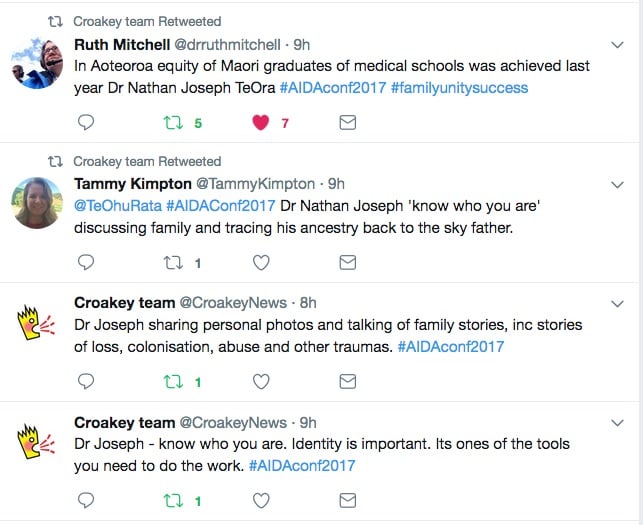 Also symbolic of hope for the future was the presence of surgeon Dr Kelvin Kong, who was caring for his two young children during the presentations today.

Minister Ken Wyatt shared with conference participants how he had watched Kong’s career pathway into otolaryngology, head and neck surgery, and admired his achievements with a sense of pride. 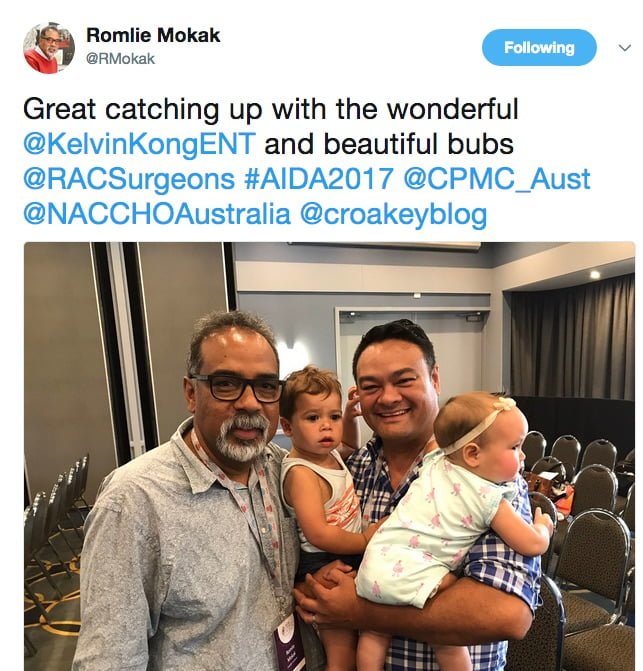 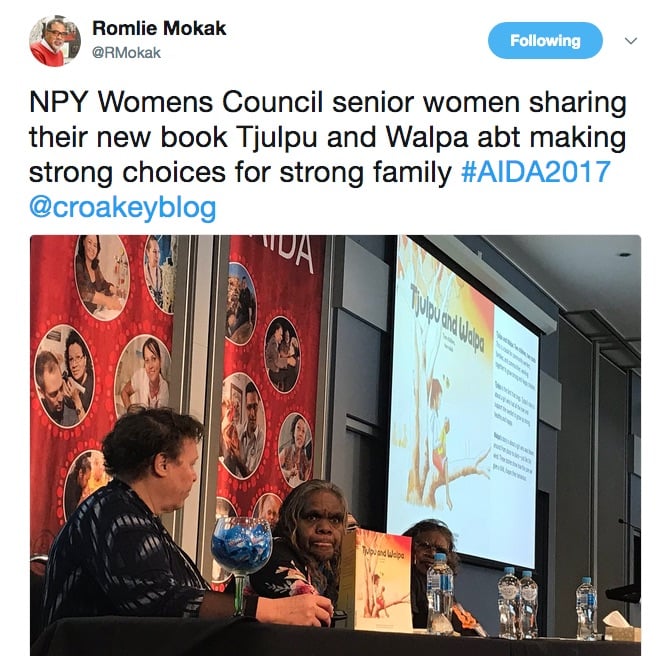 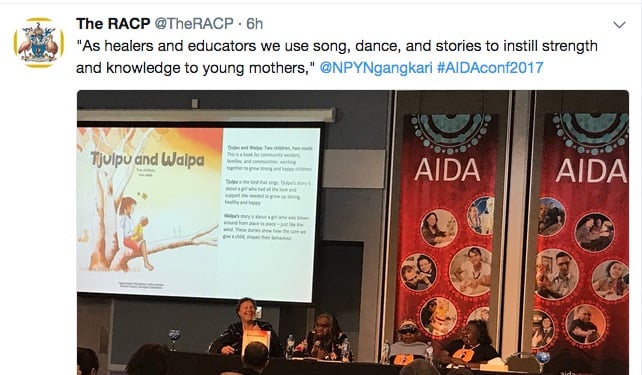 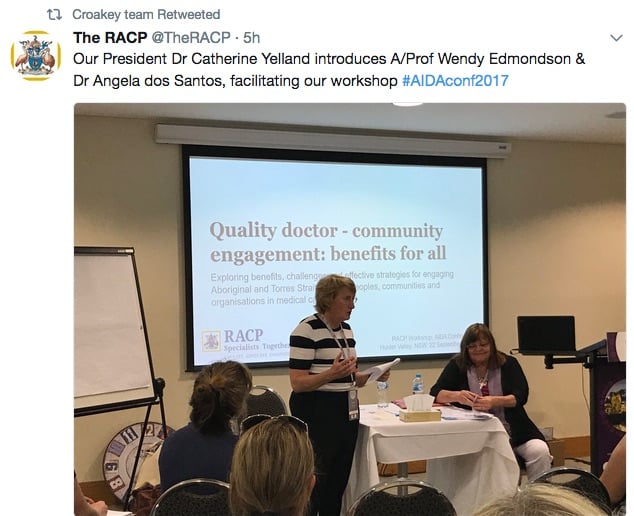 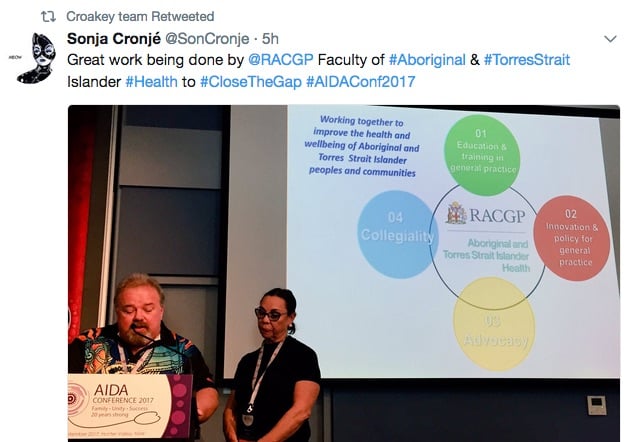 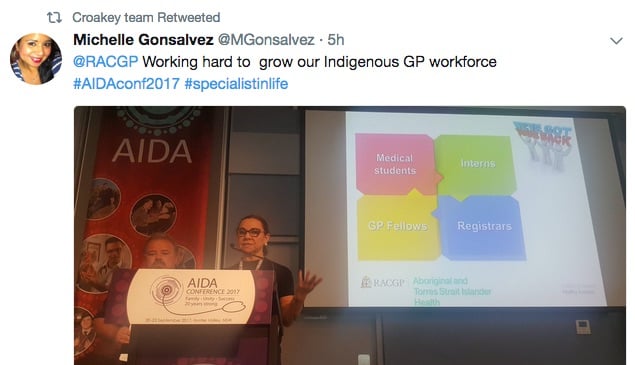 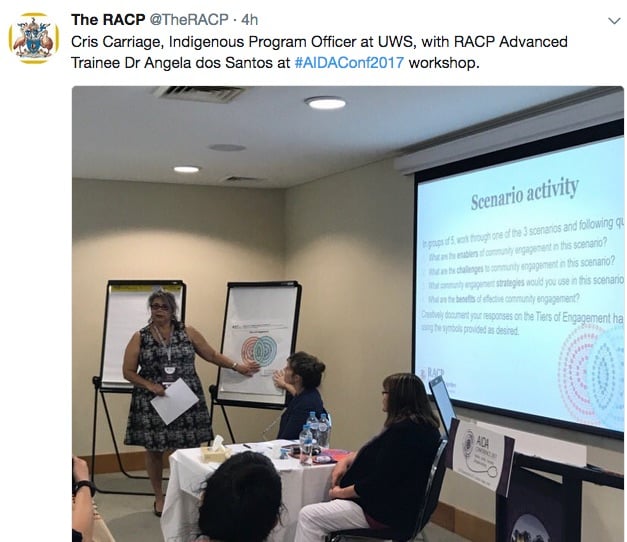 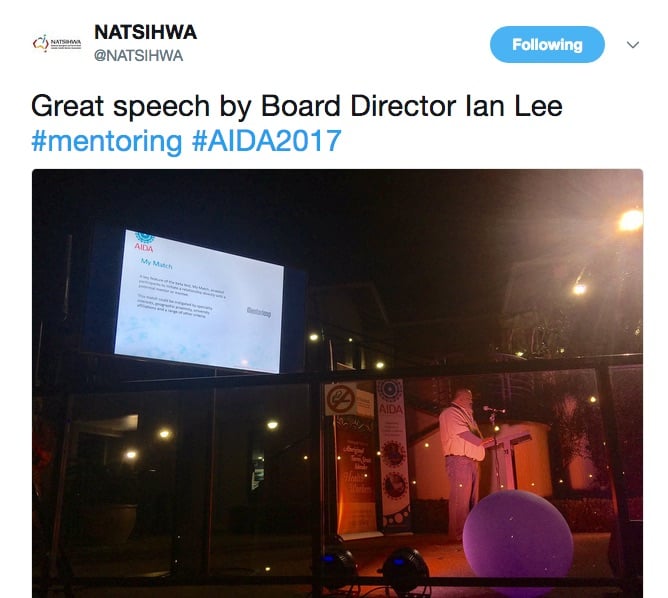 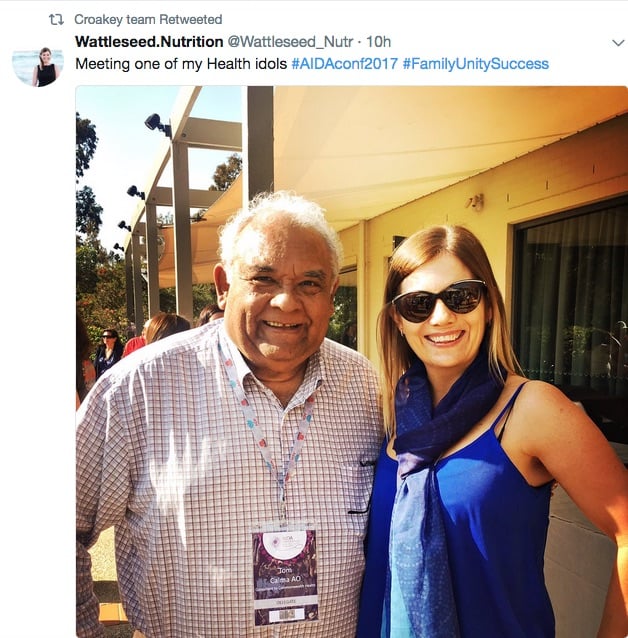 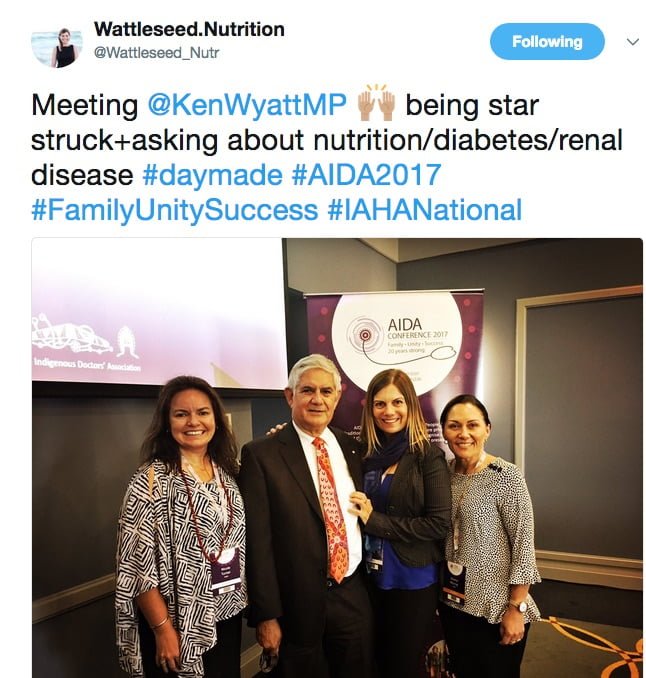 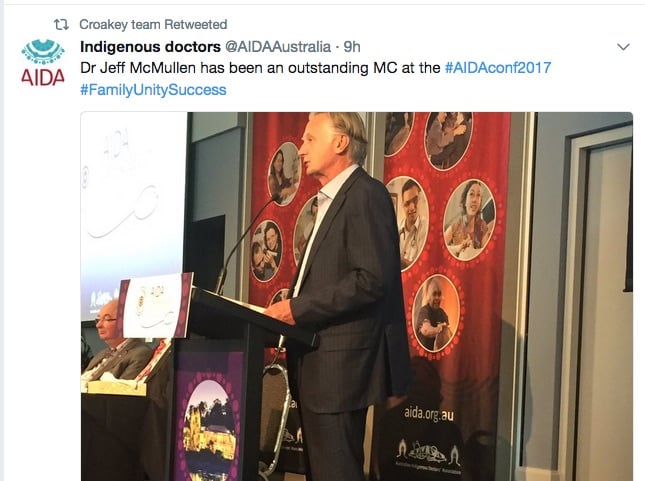 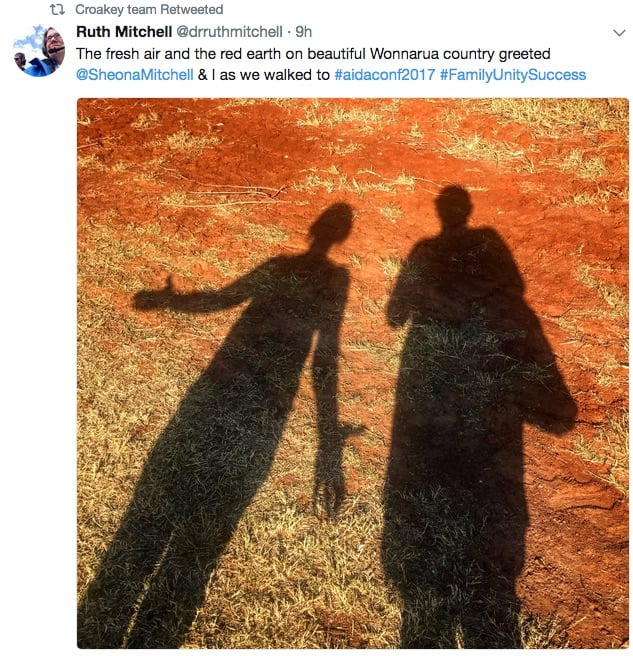 PrevPreviousFlu is a tragic illness. How can we get more people to vaccinate?
Next“Vote yes. It’s good for kids” – advice from a children’s doctorNext