Hearing from communities and experts with solutions for #JustJustice

The need for effective solutions to the “public health catastrophe” of the over-incarceration of Aboriginal and Torres Strait Islander people was highlighted at a conference held this week in Geraldton, WA.

The conference coincided with the launch of a new Croakey project, #JustJustice: a crowd-funding campaign that aims to produce a series of articles and an e-book exploring solutions to over-incarceration.

From 4-4.30pm today AEST, #JustJustice team member Summer May Finlay, a public health advocate and a Yorta Yorta woman, will be live-streaming on Periscope to talk about the project and to take your questions. Please join her (you can download the Periscope app for free).

Below are some of the ideas generated by nearly 100 policy and frontline experts in Indigenous health and justice who met this week at the Prison Health: From the Inside Out conference in Geraldton.

The conference looked at the health issues for Aboriginal and Torres Strait Islander people before, during and after prison, and at disadvantage and racism within the justice system that not only affects health but, as Gooda put it, “makes us sick”. 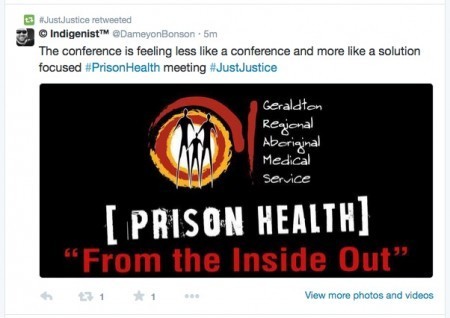 The speakers laid out the statistics:

There are, as the conference heard, complex reasons behind these statistics, from colonisation and intergenerational trauma to inappropriate policing, family breakdown and drug and alcohol abuse.

But too often our justice responses are too shallow and/or blunt.

“We have to change the way we do justice”
For example, criminologist Professor Harry Blagg outlined his research from the Northern Territory between 2010 and 2013, in the wake of the NT Intervention, looking at the impact of tougher legislation and increased police numbers.

“Despite heavy rhetoric about saving Aboriginal women and children from sexual violence, paedophile rings, all this emotive language, we found no increase whatsoever in the rate of arrest for family violence or notifications of child abuse, despite in some cases a tripling of the number of police,” he said.

“What we did find was a 250 per cent increase in the rate of arrests for driving offences. (Police would) go into communities, and do what they do elsewhere: check the cars, check the drivers. So a lot of people were ending up in prison (for those).”

Blagg also warned that the recent case of Rosie Fulton – a young women with foetal alcohol syndrome disorder (FASD) who was held in a WA prison for 21 months with no conviction after a magistrate found her unfit to stand trial – was not unique.

Failure to deal with mounting evidence that young Aboriginal people are more likely to be affected by disorders such as FASD and Acquired Brain Injury (ABI) risked “undermining our justice system,” he said. Blagg said he knew of magistrates and prosecutors who were “encouraging people with FASD to plead guilty because otherwise they would be considered unfit to plead.”

“Our system of justice is based on the premise that we understand what we’re doing, we can make rational decisions, so we can be deterred by the prospect of being punished. In court, if you’re on the FASD spectrum or have another cognitive impairment, you can’t make those rational judgments.

“We have to change the way we do justice, integrating health, mental health and disability services at the front end of the criminal justice system.” 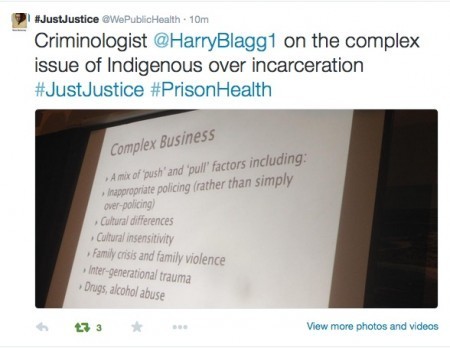 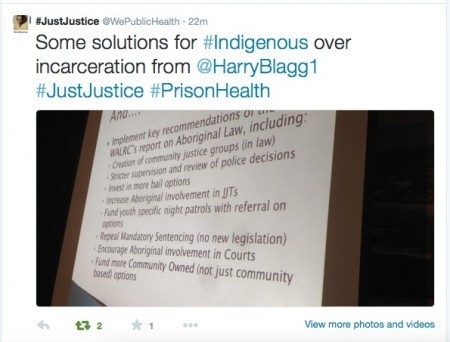 In his keynote speech, Gooda said he had run out of adjectives to describe the rate and impact of Indigenous incarceration – “disaster, emergency, a catastrophe in the making” – and he would make it, and the issue of community violence, particularly against women, his priority for this, his last two-year term.

So too, he said, should the Federal Government, given its Budget concern: getting Indigenous incarceration rates down to population level would mean an $800 million saving per year in prison costs.

Texas, and other US states, had shifted away from ‘tough on crime’ policies because they could no longer afford the prison costs, and adopted Justice Reinvestment approaches, he said.

Gooda said there were plenty of examples of success across the country – not least in the inner-Sydney suburb of Redfern where good dialogue between police and the local community had seen an 80 per cent drop in robberies committed by Aboriginal youth, helping to make it “the safest inner city suburb in Sydney”.

Barriers to fairer justice
But the Prison Health conference also heard of many barriers and backward steps, at national and local levels including: 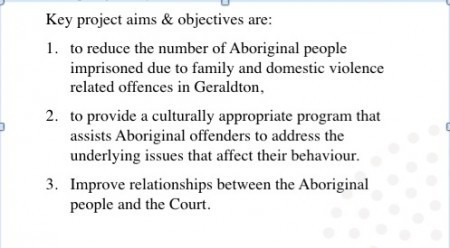 GRAMS chair Sandy Davies was insistent throughout the conference that it was aimed at producing action and solutions, and had to come up with at least half a dozen trials he could put on the ground locally by end June.

Those ideas are still to be finessed, but the meeting explored a range of broader potential directions too:

Croakey thanks Sandy Davies and the staff and management at the Geraldton Regional Aboriginal Medical Service for inviting Croakey to attend, and covering flight and accommodation costs. Croakey also thanks GRAMS for supporting our JustJustice crowd-funding campaign.

A selection of conference tweets (click on images for larger versions) 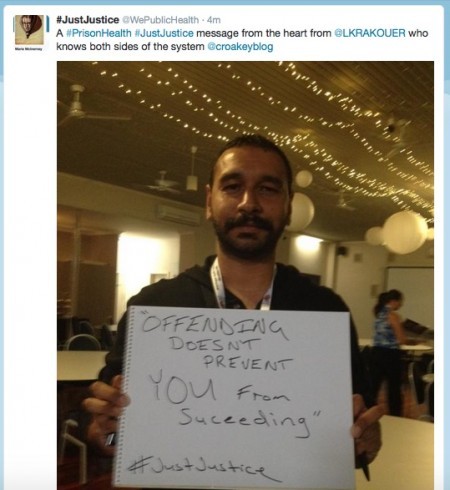 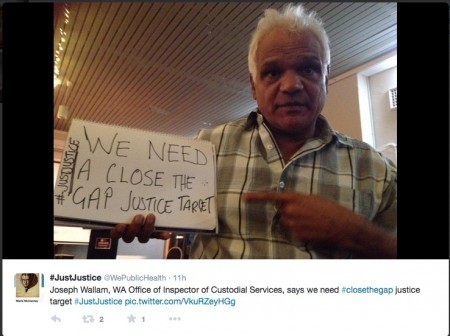 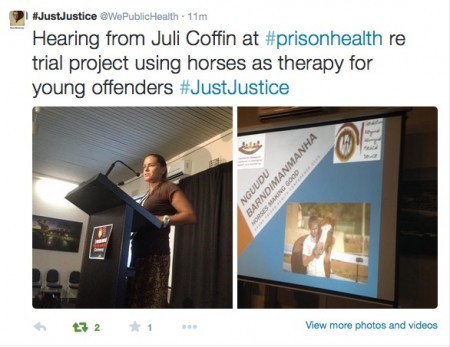 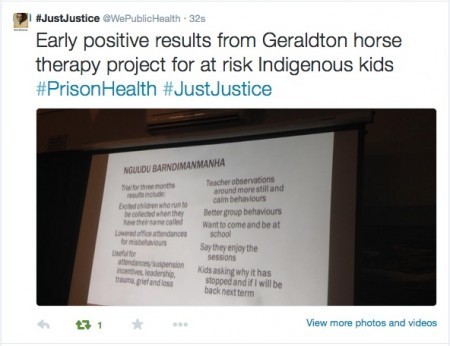 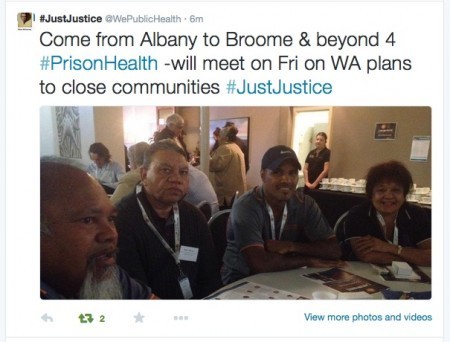 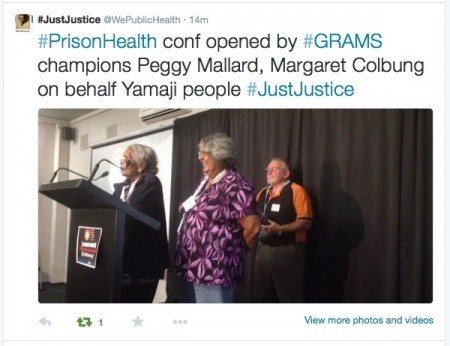 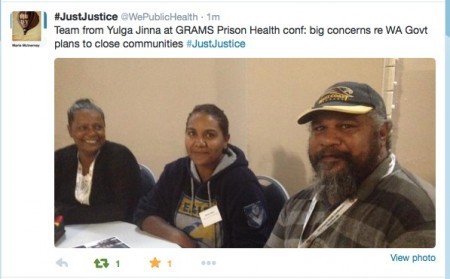 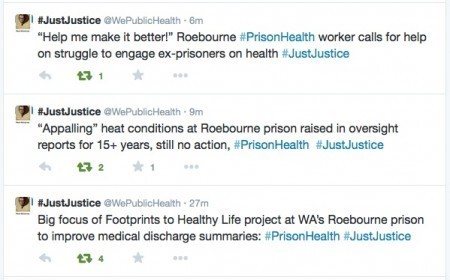 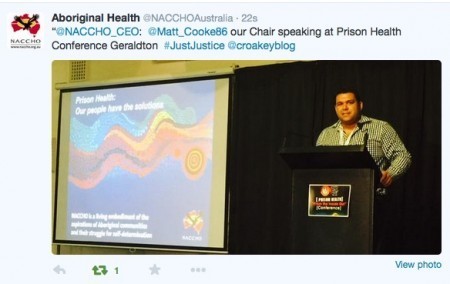 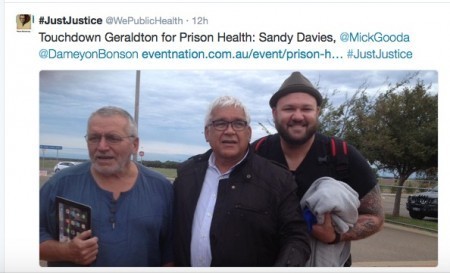 Meanwhile, thanks to the tweeters who had #JustJustice trending number one in Perth during the conference – and a particular shout-out to @DameyonBonson. 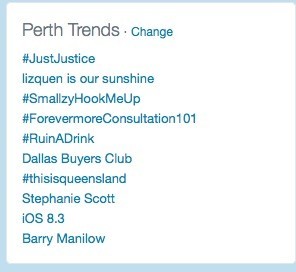 • We are looking for sponsors, donors and supporters for #JustJustice. Please support if you can.
Read more about the campaign here.