“We need to go there and support them, and stop the hysterics”: this was the clear message from a session at the CRANAplus conference in Melbourne on Friday, which heard from two Australian nurses who have recently returned from deployments to West Africa.

“We cry at night and work during the day”

Registered Nurse Libby Bowell and fellow RN Sue Ellen Kovack, who have just returned from humanitarian missions to Ebola hotspots in West Africa, spoke via telephone to around 100 of their CRANAplus colleagues  at the annual conference.

There was loud applause as the gathering heard their mates’ voices, followed by total silence as the pair answered questions from CRANAplus CEO Christopher Cliffe about their experiences.

“I think I was one of the first to put up my hand to go to Sierra Leone. I have no regrets,” said Sue Ellen, who has created quite a stir in the media, after developing a low-grade fever on her recent return to Australia. So far, tests for Ebola have returned negative, but she’s still in compulsory 21-day community isolation in Cairns.

While Sue Ellen worked directly with patients in the Kenema Ebola Treatment centre, Libby’s Red Cross mission in Liberia was in a coordination role to help support the Liberian RC in the Ebola response across all of Liberia.

Remote area nursing skills valuable
Sue Ellen and Libby spoke simply about the skills they have developed as remote area nurses in Australia which are so valuable as humanitarian aid workers in emergency responses in developing countries.

They also spoke about the practicalities of ensuring their own safety; dealing with the harsh environmental conditions; and the variety of work they undertook, from dead body management to bringing positive messages to communities on how to deal with the outbreak.

“We all know remote areas, we are used to working long hours and in hot and humid conditions, and living minimally out of a suitcase a couple of weeks at a time,” said Sue Ellen.

“We are also used to working with disadvantaged people and populations, and working cross-culturally alongside local Aboriginal health work practitioners, getting guidance from them as well as information.

“In terms of  motivation, we all have a strong sense of social justice.”

As far as emergency services go, Libby said this mission was “definitely different.” She said:

“I’ve worked in areas with cholera outbreaks before and even though they were devastating, they were containable quicker and it is quite easy to treat.

With Ebola, the death toll went up every day in Liberia, by 30-50 a day by the time I left, 95 of them were nurses and doctors.

Local people were losing their family members, friends and colleagues. It was confronting and real.

Every few days someone would tell me about their losses. And that’s when it becomes very real.

The local staff would say to me: ‘We cry at night and work during the day’.

Cholera was also more acceptable than this: there is a huge stigma attached to Ebola, reminding me of the public attitudes when HIV was first in the media.”

For Libby, a normal day entailed being responsible for dead body management, getting key messages to the communities about getting out of infected areas and getting early treatment, and organising community based care.

“Community-based care is quite controversial,” she said. “But when there is a 700-hospital bed shortage, there is no other option but to infected people in their homes.

In terms of personal risk, Libby felt it was low. She said:

“I followed the rules: No touching, no hand shaking, no hugging, keeping a 1.5 metre distancing in communities, and hand washing all day every day Once you get used to not touching people it gets very normal.

“But it was very hard at first. It’s so normal as a caregiver to automatically bend down and help someone who falls down in the street, but the rules were very strict and you knew you had to abide by them.

“Everywhere you go, you have to go through chlorine solutions before going into any building and you have to have your temperature taken – sometimes up to six times a day.”

Providing comfort was a huge part of Sue Ellen’s job, working in an Ebola-only treatment centre with about 60 beds in a small town about 200 km from the country’s capital, Freetown.

“It doesn’t sound far, but it was a 5-6 hour drive through multiple, multiple check points,” she said.

Sue Ellen worked alongside local nurses, hygienists, waste management and psychosocial workers. It was all encompassing. She said.

“There was no hugging, touching, no kissing, no shaking hands. The strict rule was: do not touch your face at all. I was highly conscious of not putting my hands anywhere near my mouth. I had a trick with an elastic band round my wrist, which I plucked if I forgot in training – and that soon taught me!

We also made sure we were covered properly, and getting out of PPE (Personal Protective Equipment) was even more difficult. It’s the most risky time to get infected, and there were very strict rules and we were closely instructed step by step on what to do and what to take off next.

You have to touch the patients – but you make sure you are totally protected.
They have to be cleaned and washed. You have to encourage them to eat and to drink.

But I felt very secure. We always checked each other, making sure that nothing was exposed.”

“I think the world needs to wake up and put the focus back on West Africa and provide the right amount of services. Is it rewarding yes. Do they need our help? Yes.

We need to go there and support them, and stop the hysterics.

Please learn about the facts. Just remember no one is contagious unless they have symptoms.”

“Colleagues in West Africa are there day in and day out.

We as aid workers can come home. They will be there until the end.

It’s going to be a long haul for everyone there.”

Meanwhile, from the Twittersphere: 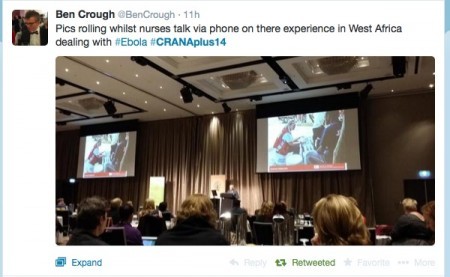 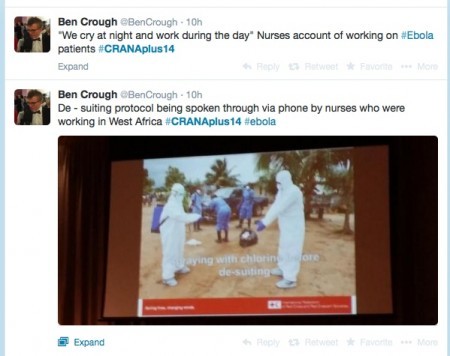 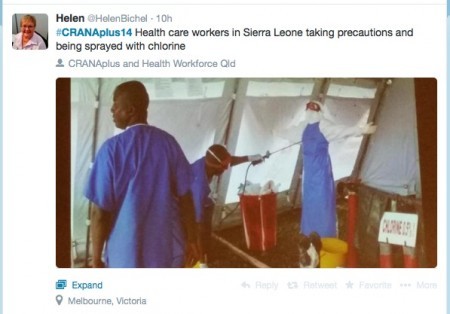 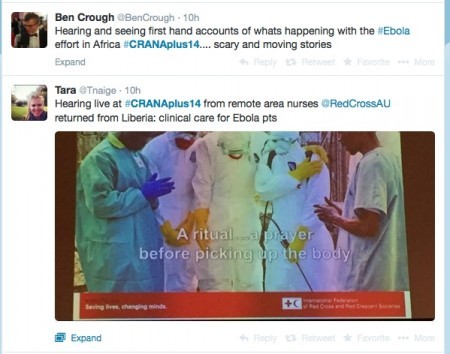 • Freelance journalist Rosemary Cadden and editor of the quarterly CRANAplus magazine is covering the conference for Croakey readers. Follow Croakey’s coverage of the CRANAplus conference here.