Heatwaves: governments and other agencies can’t say they haven’t been warned

The Victorian Government is under pressure over problems with the state’s response to the recent deadly heatwave, and it seems likely that other jurisdictions could also be doing much more to reduce the toll of extreme weather events.

With climate change set to bring more intense heatwaves and with calls for more wide-ranging efforts in prevention and management, Croakey contributors were asked to identify some related stories that merit investigation, whether by journalists or researchers. (The quotation below comes from this CSIRO explainer.)

Governments and agencies that come under fire for failures in prevention and planning can’t say they haven’t been warned. And warned…

Heatwaves should be treated as emergencies
Emma King, CEO, VCOSS

Why aren’t heatwaves (in Victoria at least) treated as emergencies in the same way that bushfires and floods are?

In the summer of 2009 around 370 Victorians died as a result of a heatwave. This was a greater toll than our worst bushfires and placed Victoria’s health and emergency services under intense strain.

This month’s heatwave may turn out to have been more deadly than 2009. Victoria’s ongoing lack of coordinated planning makes us less resilient to heatwave emergencies and should prompt questions about whether lessons have been adequately learned and what needs to be done to develop comprehensive and adequate responses to heatwave emergency planning.

We have seen some innovative solutions in Victoria but – because we lack coordinated planning – they weren’t automatic or uniform. So we saw some local councils provide free access to swimming pools for at-risk populations, while homeless people were being turned away from (air conditioned) shopping centres.  This ad-hoc approach to heatwave puts people at serious risk of heat related illness, or even death.

We would love to see a story that looks at how all Australian governments should plan for and respond to heatwaves, as they do other major disasters.

A good example is New York. When extreme heat threatens, the New York Office of Emergency Management convenes a steering committee of health, critical infrastructure, public safety, and communications agency representatives, which meets daily. Depending on the severity, the City may open cooling centres, increase outreach to the homeless and other at-risk populations, or issue excavation safety alerts for contractors working with underground infrastructure.

VCOSS last year published a report on who are most vulnerable and their experiences.

Calls to focus on those most at risk
Dr Virginia Barbour, Medicine Editorial Director, PLOS
I have not seen much coverage around how the heatwave affects homeless people or people whose housing status is vulnerable. In the UK in cold weather you do see that, though admittedly afterwards homelessness drops off the agenda again.

Psychiatrist Dr Peter Parry
Professor Parry suggested investigating the impact on the poor and elderly, as well as the importance of tackling climate change and obesity. “The fact the Government is going in reverse in terms of tackling climate change is a scandal,” he said. “An angle could be we are addicted to fossil fuels and addicted to sugar – two roads to ruin.”

He referred Croakey readers to this study, If the land’s sick, we’re sick:* The impact of prolonged drought on the social and emotional well-being of Aboriginal communities in rural New South Wales, published in the Australian Journal of Rural Health in 2011.

Many participants said there was damage to tradition and culture associated with climate change-related impacts on the land. For example, participants felt that traditional men’s roles were threatened by drought-related loss of habitat and wildlife and its impact on seasonal work.

On a more positive note, the study also found that Aboriginal people have responded to prolonged drought and other climate change impacts with a renewed commitment to care for the land.

(A copy of the study is available upon request to Croakey).

Why don’t we have mandatory standards for private rental housing (that include thermal efficiency)?

Energy efficiency for households is a big issue and has slipped off the agenda and off program funding in recent years. It has a big impact on the  broader community because of the loads on power supply and cost when people all switch on their air-conditioners, but particularly for low income and vulnerable households who often live in poor housing and/or can’t afford efficient appliances etc.

Minimum standards for rental housing are commonplace in many parts of the world, including the UK and US but not in Australia. In Victoria the quality of rental housing for low income households is very often poor and compounds their energy disadvantage. In heatwaves it’s particularly an issue for those with disabilities, medical conditions and chronic illnesses who can’t always get away from hot (or freezing cold) houses.

The story should look at how poor quality housing can lead to poorer physical and mental health from unhealthy and unsuitable conditions, including lack of cooling during heatwaves, but also from damp, drafts, leaks, etc throughout the year.

When I was Director of Public Health in Victoria, I tried to get WA, SA and Victoria to collaborate on a big heatwave epidemiology study to see what the baseline for deaths and illness was in the lead up, during and after heatwaves. But I couldn’t get them interested, and it takes time and resources do crunch the numbers. It is not impossible and it would give us a much better understanding of what we are facing and how to marshall resources in the community as well as in hospitals, which of course get the majority of the resources now for preventable interventions.

ACOSS completed a project last year on the community sector’s resilience to climate change. We found that while community services are often ‘first responders’ and critical to the capacity for communities to survive and recover from extreme weather events, community organisations are themselves poorly equipped in terms of their own resilience and capacity to adapt to the effects of extreme weather.

One thing that’s often missed in this heatwave discussion is that community health services have heatwave policy/criteria and processes to follow, for their clients’ welfare.

We know the heat has extreme implications for those with chronic diseases/co-morbidities, and services work hard to support and contact as many at-risk clients as possible. Staff are very caring to their clients and go out of their way to explain what the risks are, why clinics have to be cancelled, what clients can do, what their living conditions are like etc.

There is a clear indicator of when it’s considered high-risk for clients.

I wonder whether a story on how community health services and their staff respond to those in need might work? Both during a heatwave and before/after.

This could also open up for discussion about how services could respond better (e.g. open up before/after hours in hot weather?)

In addition to the obvious things like “heat bank” effects relating to buildings (what are the ways to mitigate these effects?), the role of trees and parks, and the cooling requirements for people in buildings in close proximity to each other & in high-rise buildings, there would also be other health-related issues such as those relating to the spread of communicable diseases.

And what about the animals?
Julie Leask, University of Sydney

A friend mentioned the issue of companion animals dying from lack of water and heat and complained that it’s not getting much attention in the media. Not sure if it’s too far away from human health but worth thinking about.

Croakey also thinks there has been far too little attention to the effects on wildlife and ecosystems more broadly. While this cute picture of emus swimming at Monkey Mia in Western Australia has been widely circulated, we’ve heard far less about the implications of extreme weather for health issues surrounding ecological balance.

The heat-related deaths of thousands of bats earlier this month in southern Queensland may have made international headlines but it would be useful to hear more from public health and ecohealth experts about the wider implications of such incidents.

And my own personal story about poor planning is of an electricity provider going ahead with a scheduled day-long power outage in rural NSW on a day when high temperatures had been forecast, leaving elderly and vulnerable residents without access to water or cooling in hot and high fire risk conditions.

• Linking you to the heatwave coverage at The Conversation, including: A forensic pathologist’s overview of heatwaves and health 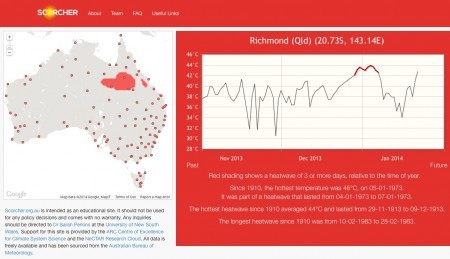