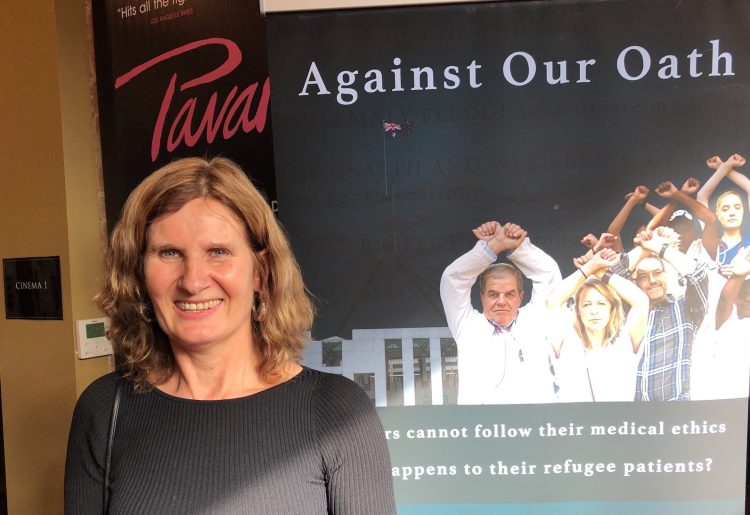 Heather Kirkpatrick at Hobart premiere of her documentary. Photo by Melissa Sweet

As health professionals and human rights advocates mount a last-ditch effort to thwart the Morrison Government’s repeal of the Medevac legislation, doctors say a new documentary on the health and human rights of asylum seekers is essential viewing.

The documentary, Against Our Oath, provides timely context as the #SaveMedevac campaign gathers force, with Senators due to debate the repeal of the legislation today (27 November).  Read about the legislation’s history here.

As well, more than 4,900 medicos (at 12.30am on 27 November) have signed a petition asking Parliament to maintain the Medevac legislation, which aims to ensure better access to healthcare for asylum seekers held in offshore detention.

Intense lobbying is being directed at Senator Jacqui Lambie (@JacquiLambie) who holds the deciding vote, as a new Guardian Essential poll shows a majority of voters back the Medevac legislation or believe it should be more compassionate.

In a statement released yesterday, the RACGP called on the Senate to save the Medevac legislation. Dr Kate Walker, Chair of the RACGP Refugee Health Network, said repealing it would be a huge mistake:

Asylum seekers and refugees must be able to receive a proper level of healthcare as determined by qualified medical professionals.

What this legislation does is give doctors, not administrators, greater power in determining whether people on Manus Island or Nauru require transfer to Australia for medical treatment. At least 200 patients have been transferred for urgent medical care using the medevac legislation.

If this legislation is repealed there is a high risk of refugee deaths. As a GP I can’t stand by and let that happen, every life is important.”

Against Our Oath – which was screened at the ACEM conference in Hobart last week – investigates the ethical issues confronting doctors and other health professionals in caring for asylum seekers when governments and their agents block clinical decision making.

Read more about the film in these media materials, and also check these tweets from the ACEM screening.

Speaking after the Tasmanian premiere on 4 November, Dr Helen Young – one of the doctors featured  – said it was “an amazing” film that should be widely seen.

It’s a really important film to see, if you care about human rights and… you want Australia to be a place that values human rights… then it’s important for everybody to see this film.

It would be really good if it could be used as an education tool around medical ethics for each group of students coming through, because this is real world medical ethics; you don’t get more frontline than this, than when you are challenging your own government about your medical ethics…

It’s really important for doctors in training to see this, and nurses in training, and anybody who works in the health professions.”

Young urged Croakey readers to contact their MPs to argue for support of the Medevac legislation, but acknowledged that it was only part of the solution.

Medevac in reality is just treating the symptoms, it’s not doing anything for the cause; it’s kind of like treating measles without immunising people, really, in that detection harms health…

We know that offshore detention is designed to be harmful for people. Medevac is a way of ameliorating that, but it’s not actually treating the cause, which is that we need to stop the process of offshore detention.”

Also interviewed after the Hobart premiere, Dr Bastian Seidel, a GP and former president of the RACGP, urged colleagues to engage with screenings of the “confronting” documentary, and lamented a lack of sustained media coverage of the issues involved.

Seidel said he hoped Lambie would support the Medevac legislation:

I have not had a commitment [from her], but in my dealings with her in the past, this is what she is guided by.”

In the statement below, released on 27 November, Lambie said she would support the repeal of the legislation on one condition that she has not yet disclosed. 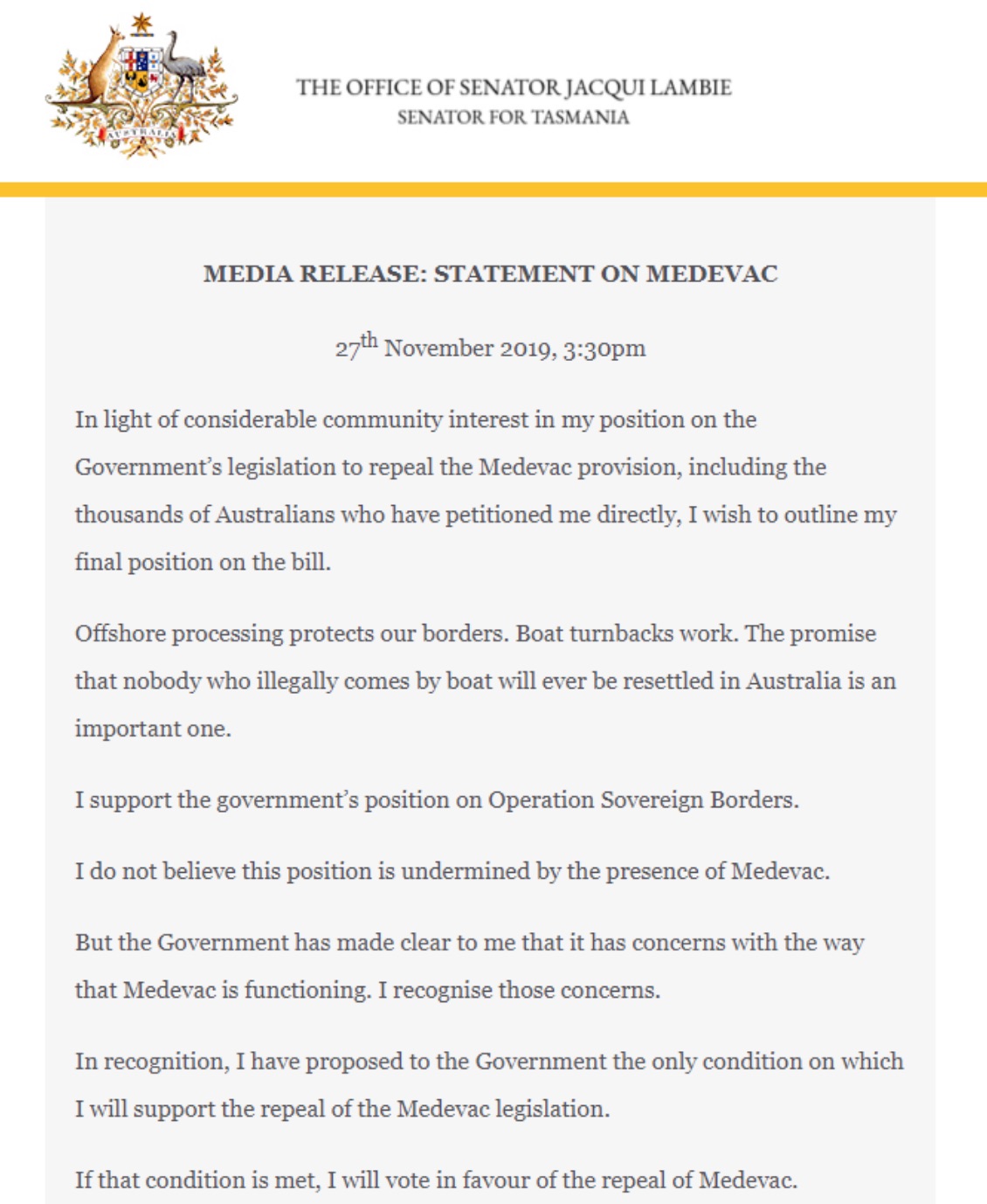 In an interview in his Hobart office on 12 November, independent MP Andrew Wilkie described Against Our Oath as a “fabulous” film that deserved a wide audience. Watch the interview below.

Film-maker Heather Kirkpatrick  travelled to Germany and investigated the Nuremberg trials as part of her research because she wanted to provide some broader historical perspective to the story of medical ethics and whistle-blowing.

In an interview with Croakey, Kirkpatrick urged the Australian Health Practitioner Regulation Agency to engage with the ethical concerns raised in the documentary.

She said: “Any country should be concerned when medical professionals can’t follow their clinical training, when you have a situation when bureaucrats with zero medical training can call the shots on life-affecting illnesses, you’ve got to say, what’s wrong?”

Kirkpatrick urged health professionals and bodies to consider organising screenings of the film, which she hopes will also be incorporated into bioethics teaching.

“I’ve seen a lot of doctors quite shocked by the content; they say things like, ‘I knew things were pretty bad, but I didn’t know that was going on’,” she said.

Images from end of film 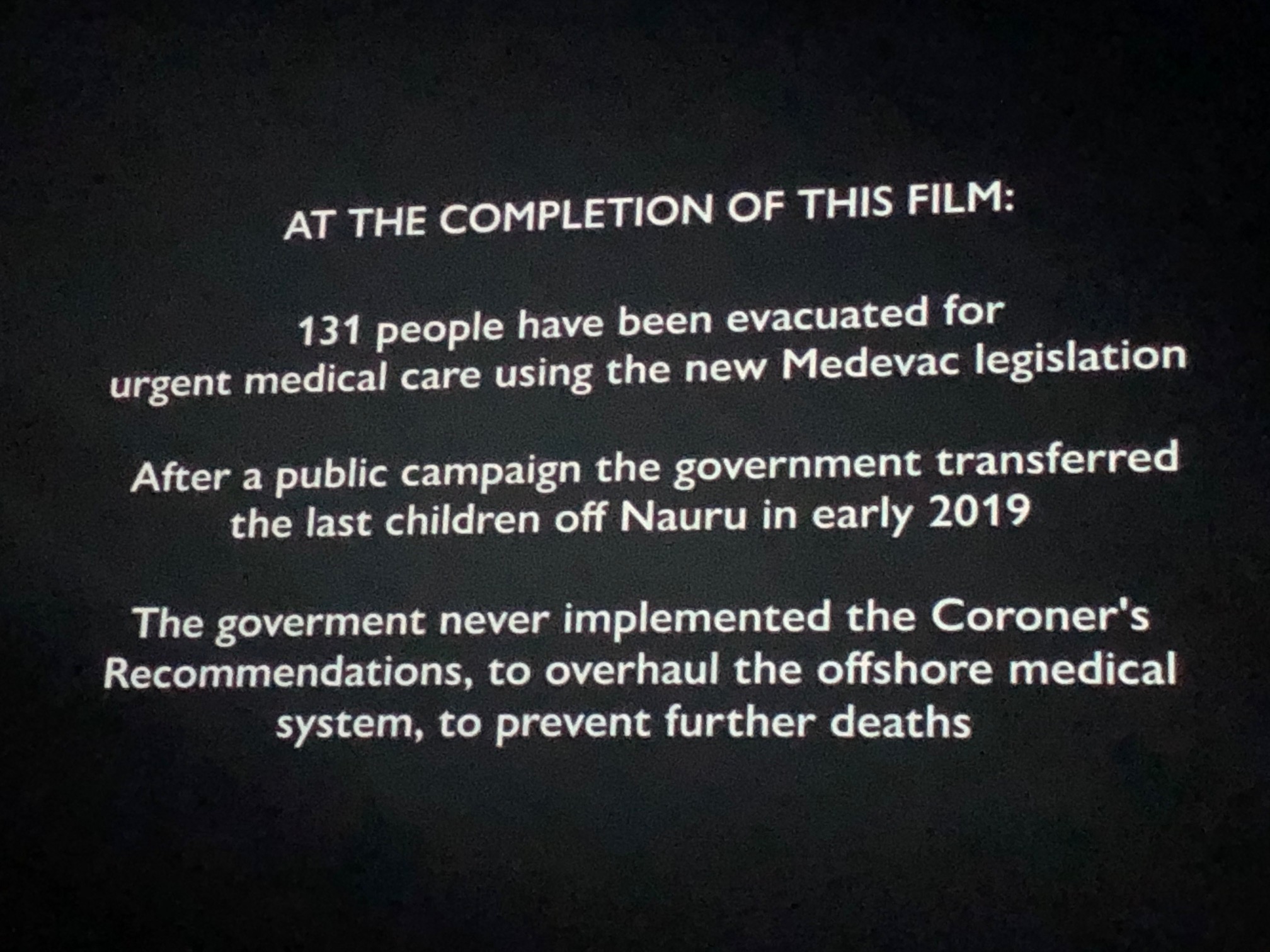 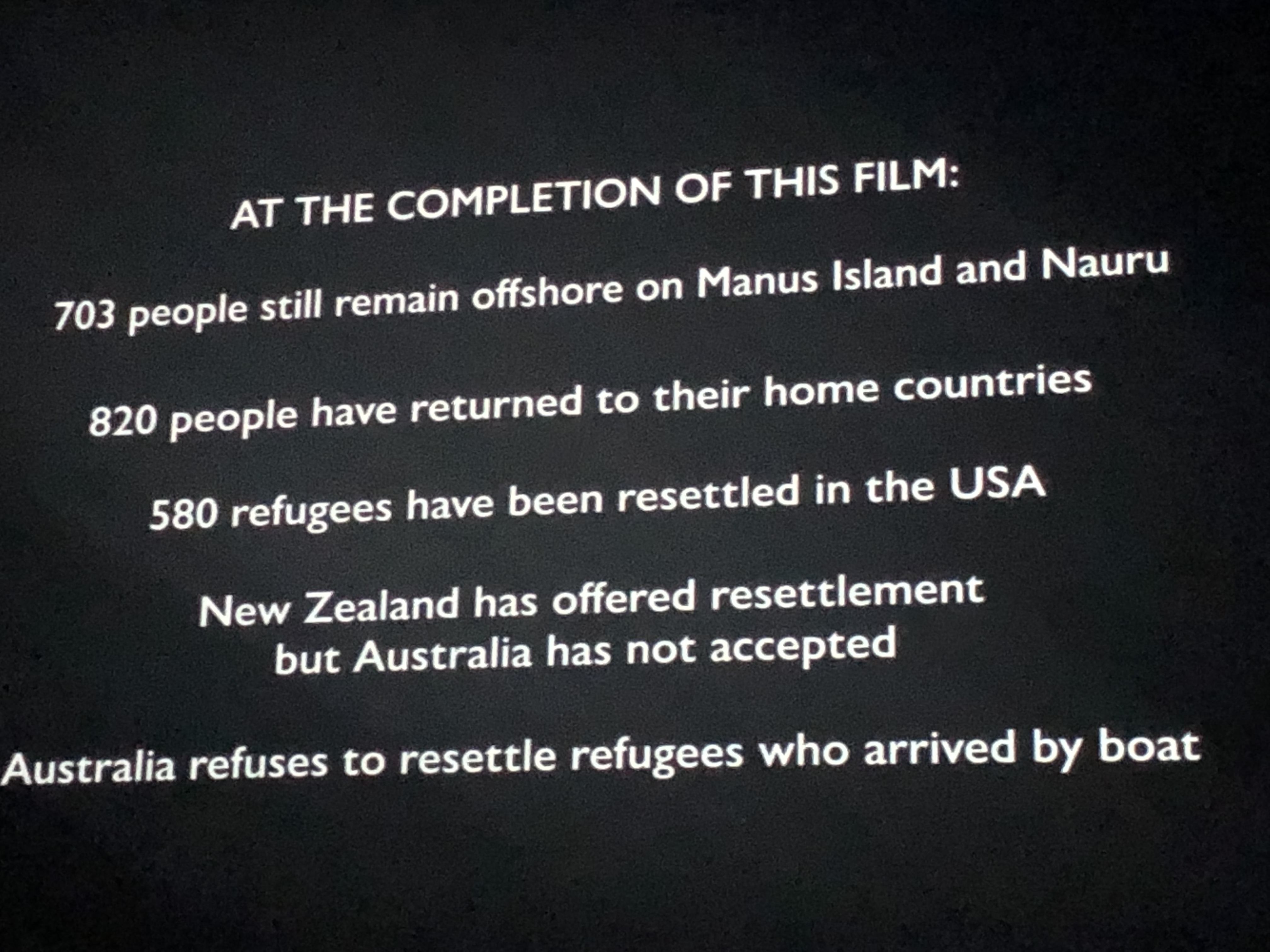 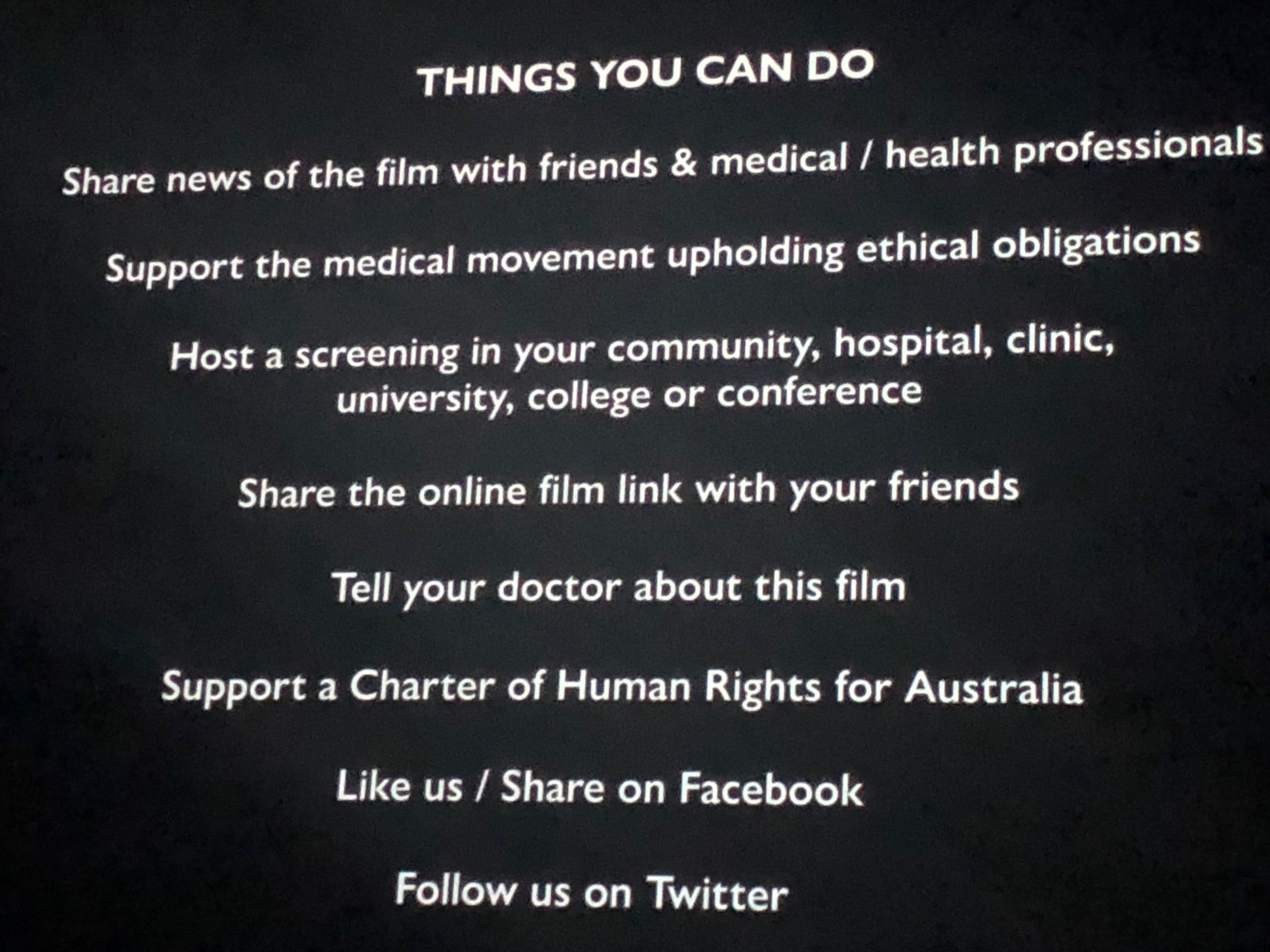 How organisations or people can host a screening: https://www.againstouroath.com/host-a-screening/

Where to watch the film online: https://www.againstouroath.com/watch-online

RACP President, Associate Professor Mark Lane
“This powerful film strongly affirms the ethical duty of our profession to put the health and wellbeing of our patients first. It is so important that the stories of whistleblower doctors and other health professionals be heard, and that the community is aware of the health consequences of prolonged offshore processing and of delays and failures to transfer seriously ill refugees and asylum seekers, including children.”

Emeritus Professor Kim Oates AM, University of Sydney
“Heather Kirkpatrick’s film Against our Oath gives a powerful message that doctors are obliged to put the needs of their patients first. The health and well-being of the patient is our primary consideration. We are called to respect our patients, not to harm them and to do our best to medically care for them. We are called to speak up when patient care is compromised. This has nothing to do with being political. But when our ethical imperative to provide this quality of care becomes hindered by a political process, our ethical obligation must always come before any political agenda whatever the pressure. As one of the doctors interviewed for this film says, ‘Our code of ethics has been around for a lot longer than the Border Force Act’.”

Dr Vijay Roach, President, Royal Australian and New Zealand College of Obstetricians and Gynaecologists
“This documentary captures the essence of our profession, our responsibility to the sick, vulnerable and marginalised. Not just relevant for medical students but for every one of us in the caring profession. I would recommend it to you unequivocally.” 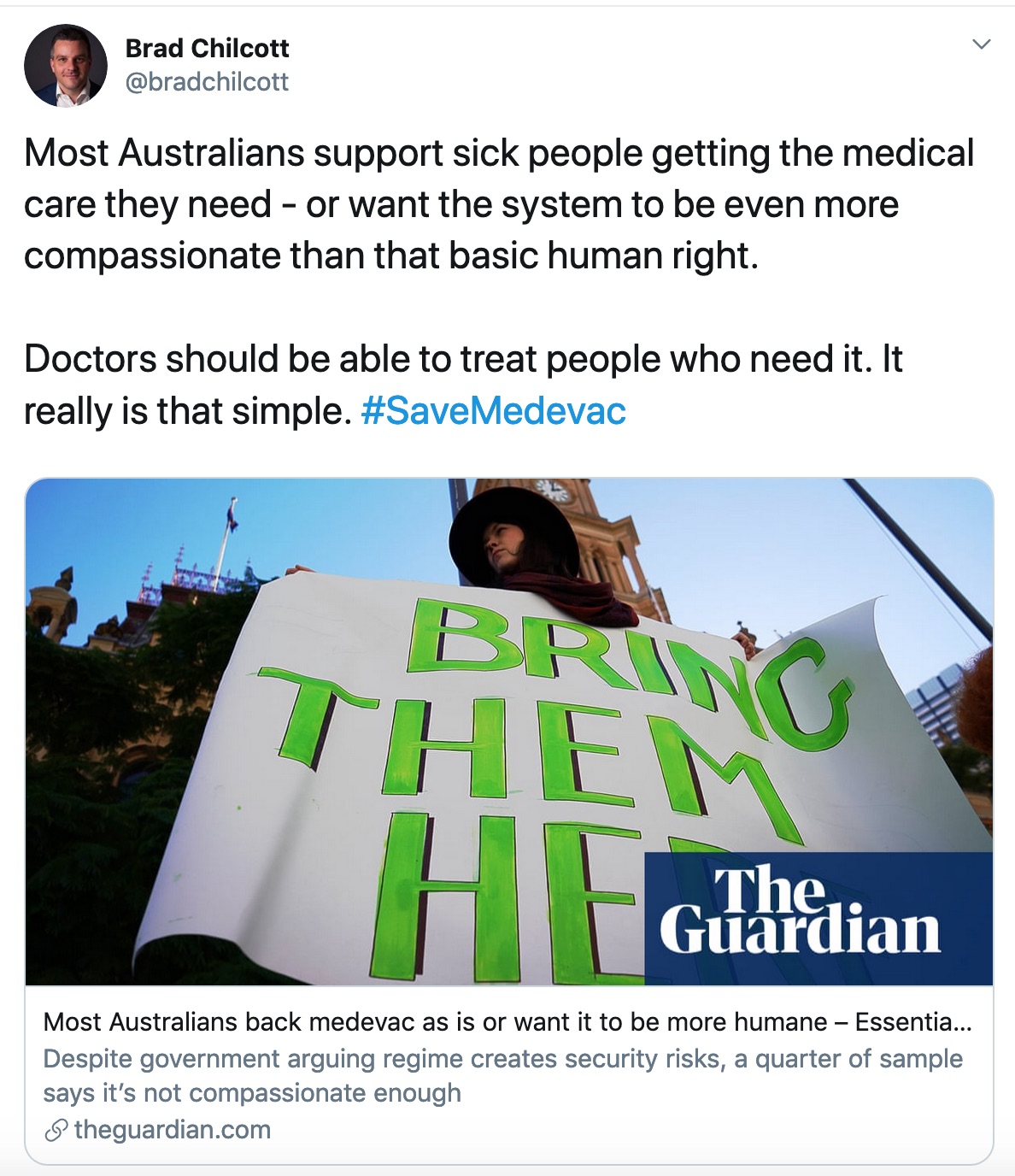 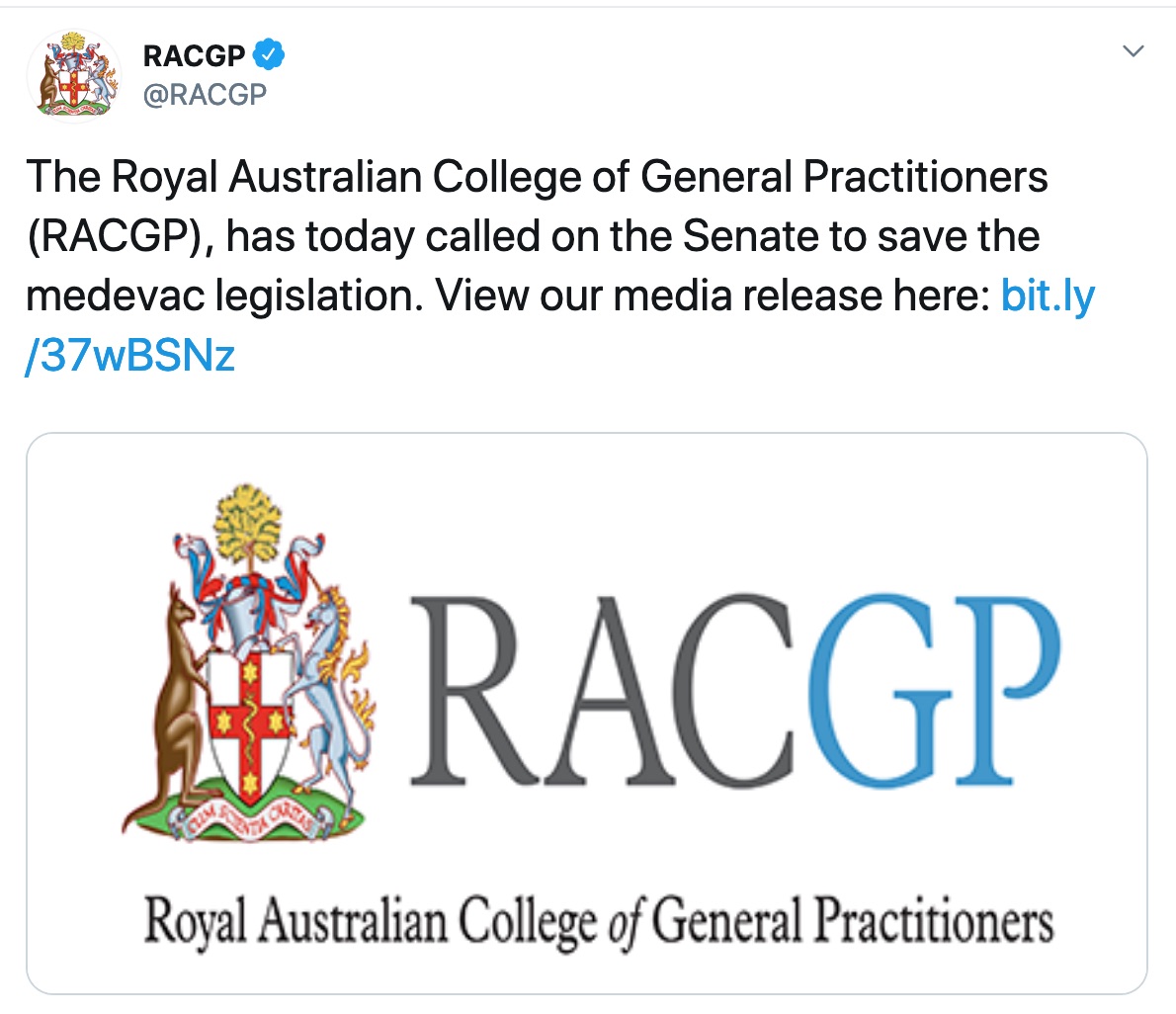 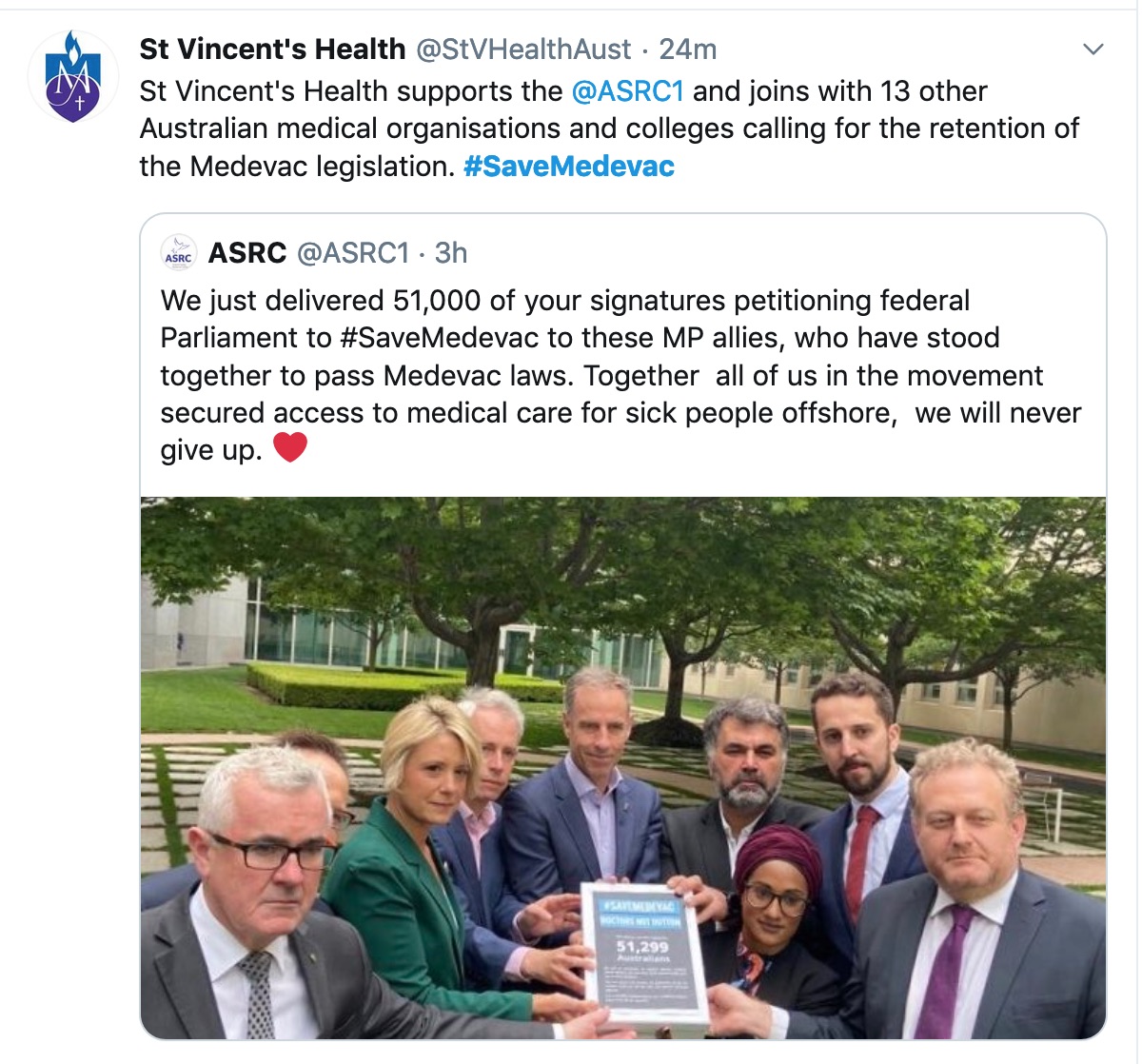 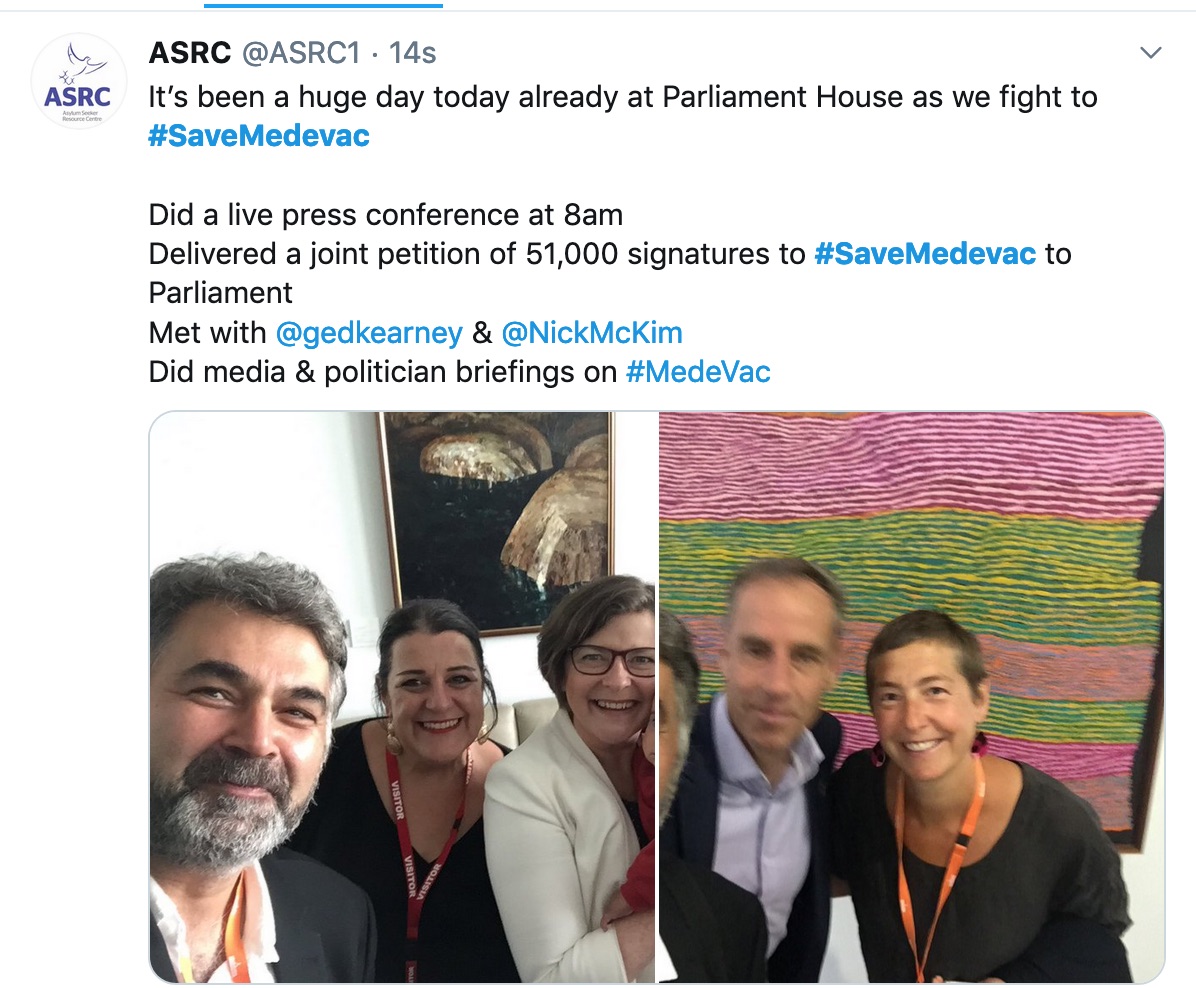 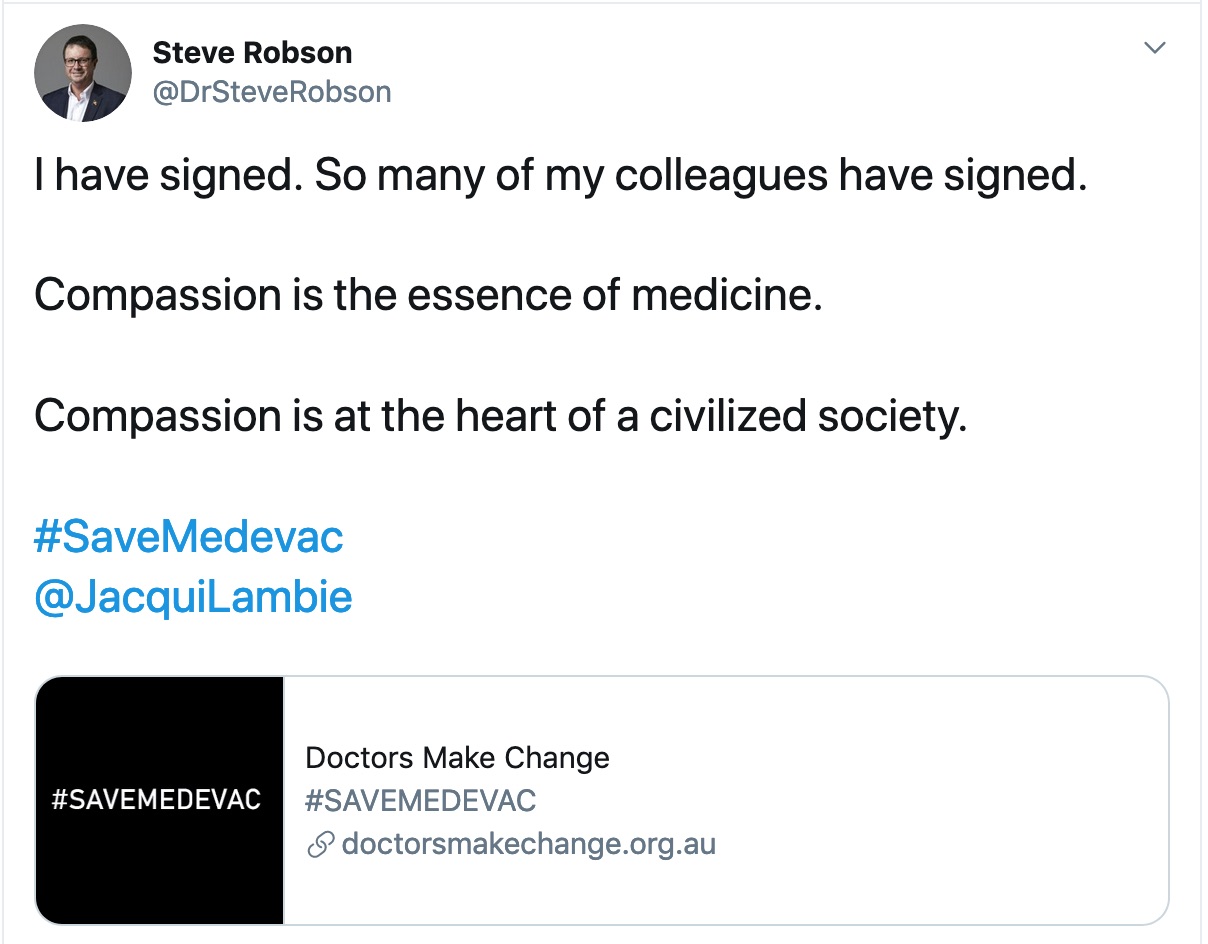 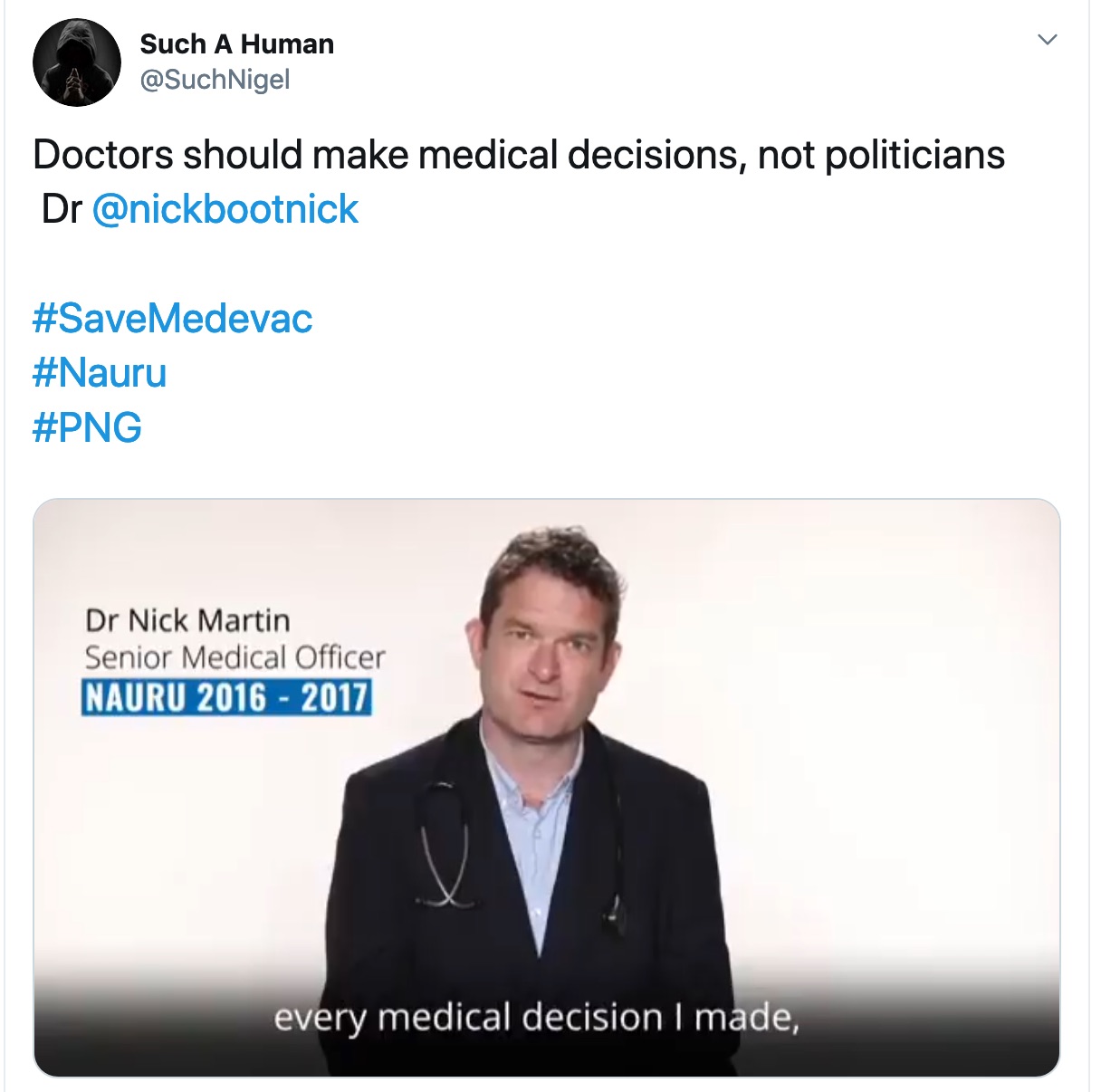 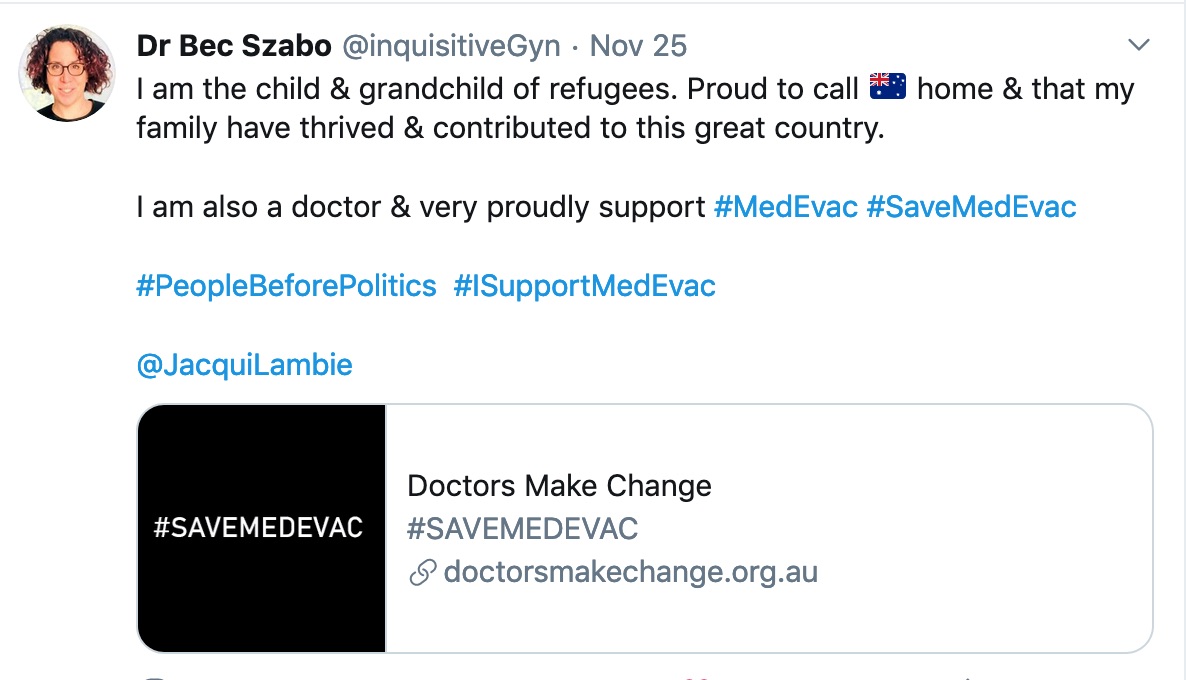 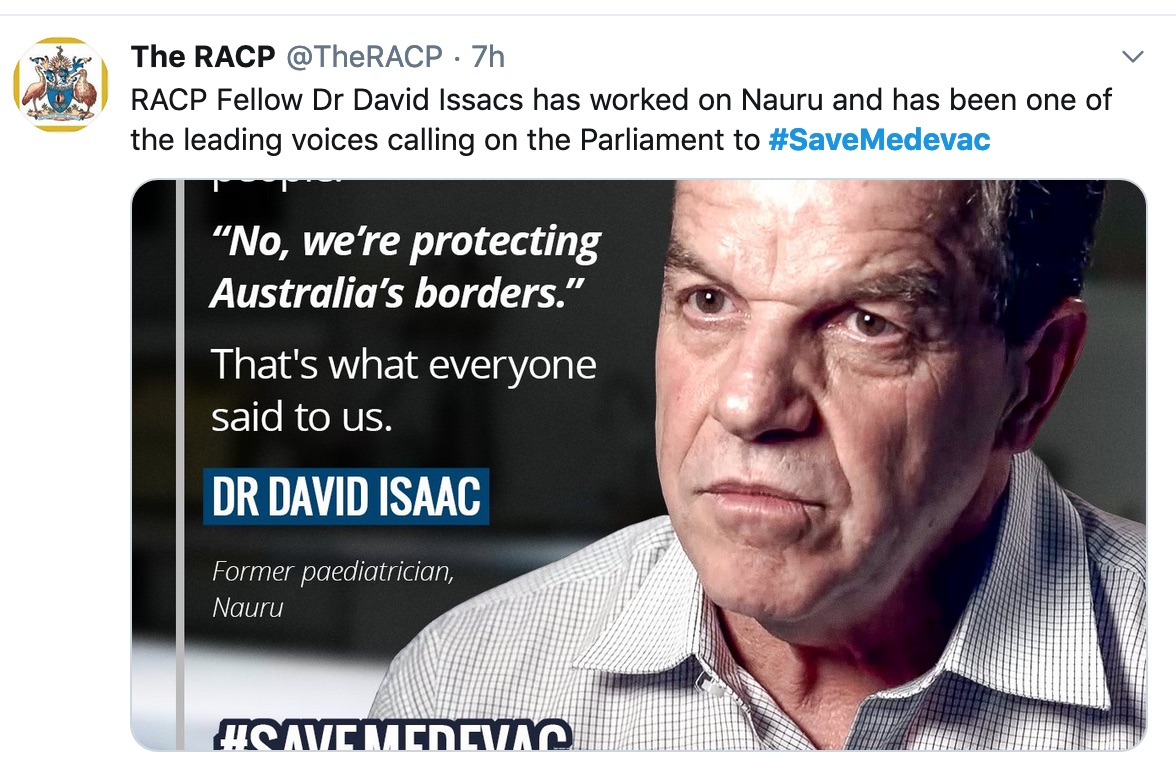 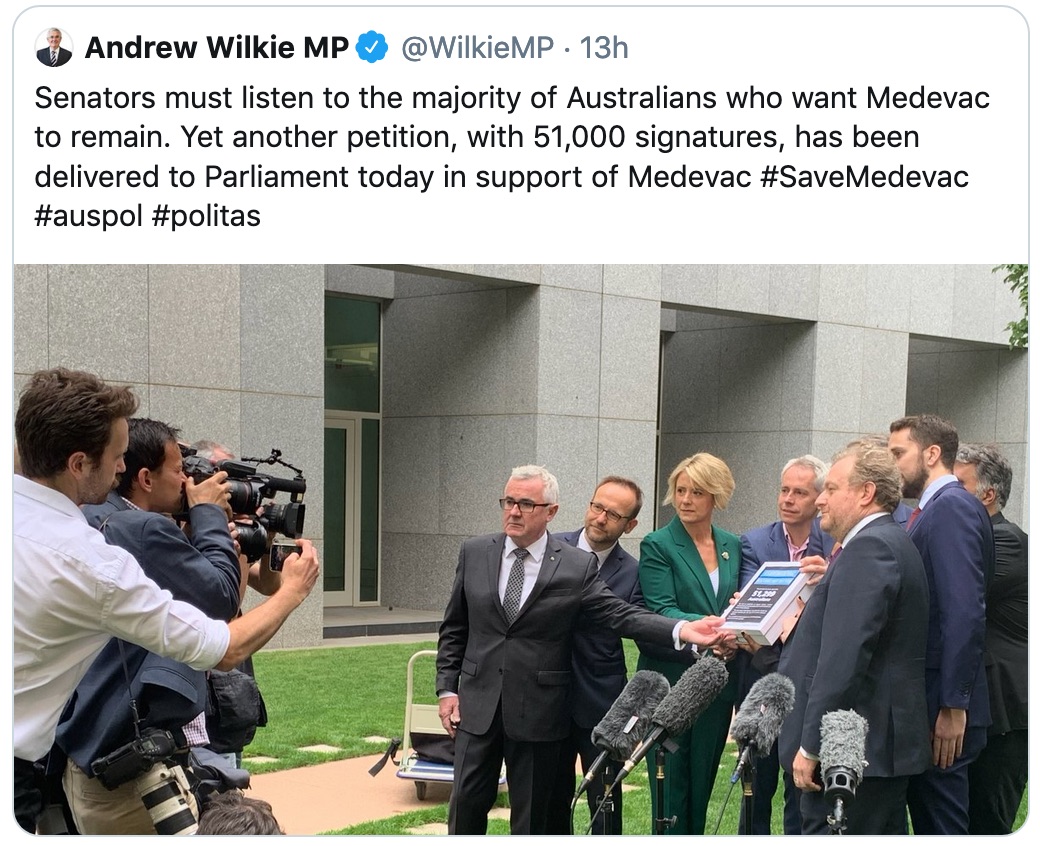 PrevPreviousThe ‘Catch it Early’ bandwagon: do the media overhype medical testing for healthy people?
NextCalls for alternatives to police in mental health crisesNext