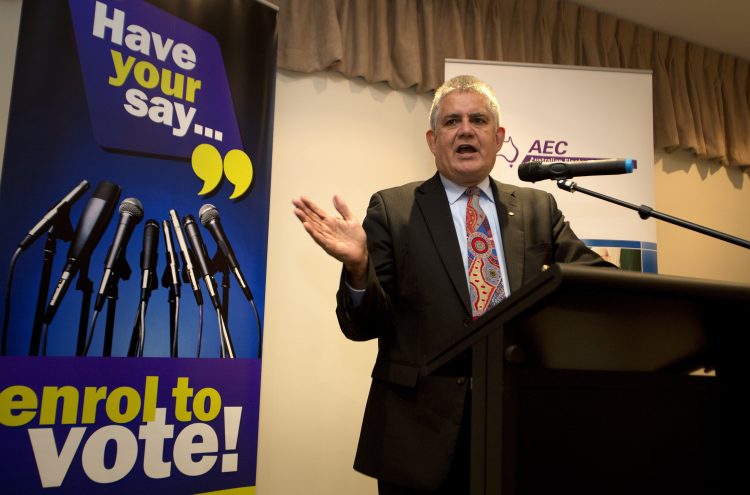 The appointment of Ken Wyatt as Minister for Indigenous Australians was on Monday hailed as a “historic” and “defining” moment in Australian politics, as the country marks National Reconciliation Week.

A Yamatji, Wongi and Noongar man, Wyatt was named Indigenous affairs minister on Sunday — National Sorry Day — by Prime Minister Scott Morrison, who also announced the creation of a National Indigenous Australians Agency within the Department of Prime Minister and Cabinet to be overseen by Wyatt.

Wyatt is the first Aboriginal person to be appointed to Cabinet, and the first to hold the Indigenous affairs portfolio. His mother, Mona, was a member of the Stolen Generations, making the Sorry Day announcement of his appointment particularly significant.

Wyatt, the Member for Hasluck, was previously Minister for Aged Care and Minister for Indigenous Health — a portfolio that has not been rolled over into the new ministry. Whether these responsibilities will be held by Wyatt in his new role or remain under the Health portfolio is presently unclear.

The unprecedented appointment was applauded by community groups on Monday as historic, a defining moment in Australian politics, and a significant day for the Aboriginal and Torres Strait Islander community, with transformational potential.

Ken Wyatt is highly respected for his hard work over many decades for Aboriginal and Torres Strait Islander people, particularly in the health and education sectors. His elevation to Cabinet is a good sign that this new Morrison Government is serious about advancing the reconciliation agenda.

On this 2019 National Reconciliation Week, Mr Wyatt’s appointment will be a confidence-booster for the vast majority of Australians who support our vision for a truly just, equitable and reconciled Australia. According to the latest Australian Reconciliation Barometer 90% of Australians believe the relationship between First Peoples and other Australians is important.

Mr Wyatt’s appointment and the signing, prior to the election, of an historic partnership agreement with First Nations peak bodies to design, implement and evaluate new COAG closing the gap targets are sign-posts that the Prime Minister is serious in finding a way forward.

It’s important that the Voice to Parliament is progressed in this term of parliament and that the Prime Minister work with First Peoples to lead that process to a referendum.”

We warmly congratulate Minister Wyatt on his historic appointment, which we hope will mark a new era in relations between the government and First Nations peoples – one centered on self-determination for Aboriginal and Torres Strait Islander peoples.

Aboriginal and Torres Strait Islander organisations have the answers to the problems that confront their communities and it’s time for government to listen.”

(ACOSS also welcomed the addition of the National Disability Insurance Scheme to the Ministry, with Stuart Robert named in the role)

Arthur Moses, president of the Law Council of Australia said:

For the first time in the history of our federation, a person of Aboriginal or Torres Strait Islander descent been appointed as Minister for Indigenous Australians – this is a pivotal decision by the Prime Minister and one that will undoubtedly benefit all First Nations Australians.

Establishing an Indigenous Voice to Parliament is a priority for the Law Council and we look forward to working with Mr Wyatt to ensure the future vision captured by the Uluru Statement of the Heart becomes a reality. The Law Council will seek a meeting with Prime Minister Morrison and Minister Wyatt at their earliest convenience to advance this significant issue.

Improved justice outcomes for Aboriginal and Torres Strait Islander peoples is vital. We offer our expertise in this area to help formulate legislation to support Indigenous-led policy solutions.”

We’ve rounded up some of the reaction on social media below: 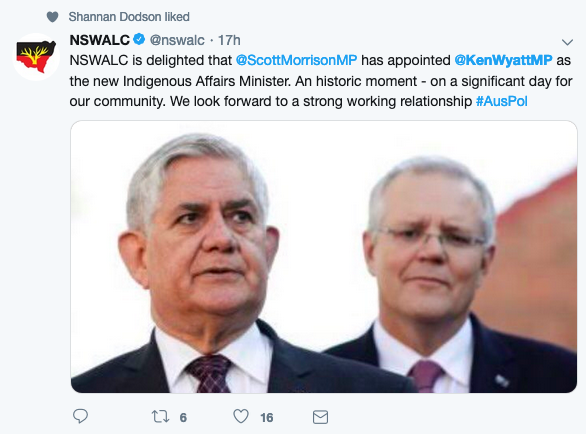 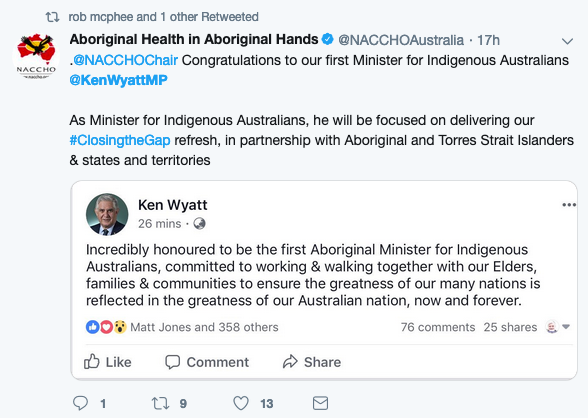 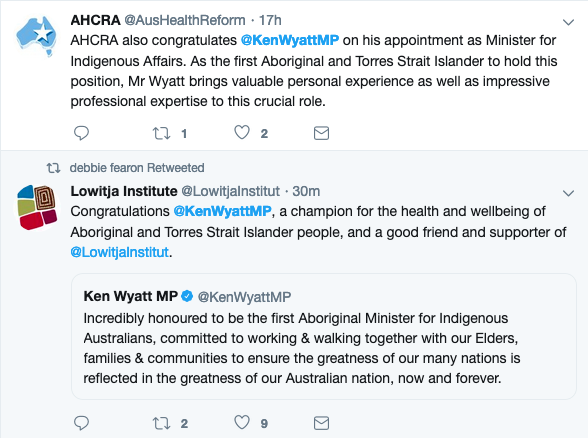 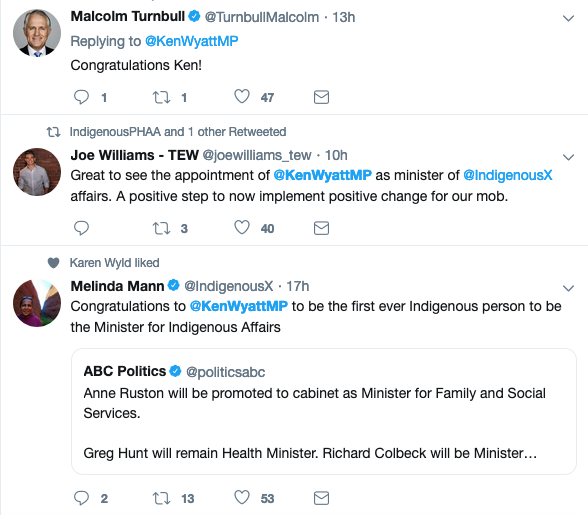 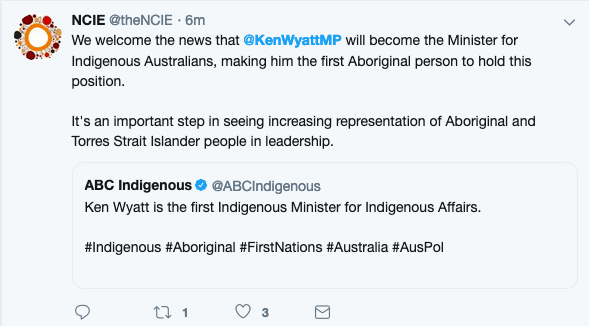 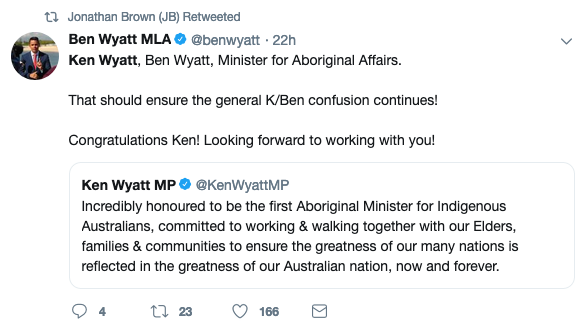 Greg Hunt was returned as Health Minister by the PM in his Cabinet reshuffle, with former holder of the portfolio, Sussan Ley, welcomed back onto the frontbench as Minister for the Environment.

Pleased to be continuing as Health Minister and broader policy role in assisting the PM on cabinet and the public service.

Some of the priorities identified for Hunt include:

These were nominated as the most pressing concerns in the health portfolio on Monday by groups including the Royal Australasian College of Physicians, the Public Health Association of Australia, and the Consumers Health Forum.

In the prevention space, Hunt was urged to focus on:

After re-appointment of Health Minister @GregHuntMP, we urge him and Morrison Govt to work to shift current focus from hospitals & drugs to prevention for better outcomes and sustainable budget @terryslevin #5percentforPrevention pic.twitter.com/Tk327VY6Io

What do we need from a Minister for the Health of all Australians? 1. Accept as the first priority Close the Gap. 2. Launch the programs we need to tackle equity in access to health care. 3. Embrace your obligation to implement the charter of health care rights. @GregHuntMP

Congratulations @GregHuntMP on retaining the health portfolio. Government clearly needs to do much more to improve the health of the nation and the health system we all rely on.

Disappointingly for rural and remote health, the Minister for Rural Health portfolio (previously held by Bridget McKenzie) has not been renewed, and where these responsibilities will be allocated remains uncertain.

“Having a critical issue like Rural Health without a dedicated portfolio has a significant flow-on effect. It means that Rural Health is deemed not significant enough to warrant its own portfolio focus,” said Adam Coltzau, president of the Rural Doctors Association of Australia.

“The seven million people who live across rural and remote Australia — and who often face significant waiting times to see a doctor or an allied health professional, or who need to travel long distances to access a health service — would argue fiercely that it should.”

The National Rural Health Alliance said improving access was a priority for rural and remote health, via telehealth and increased nursing and allied health workforce:

“Mr Hunt is very much aware that Australia’s health system is considered second best in the world by international standards and the only thing that’s holding it back from being number one is the lack of equitable access to health care right across the nation,” said NRHA CEO Mark Diamond.

“A large chunk of that inequity he acknowledges is because people in rural and remote Australia experience real difficulties in accessing healthcare every day of the week.”

The Australian College of Rural and Remote Medicine (ACRRM) welcomed the appointments of Wyatt & Hunt, and said it hoped their commitment to the bush would “not only continue, but move from conversation to action”:

It’s now time to get to the serious business of improving access to services; recognising rural medical practitioners for the contribution they make to improving health in our rural and remote populations, and addressing issues including mental wellbeing, digital health, cultural safety and respect, and infrastructure in a collaborative and coordinated way that empowers safe communities.”

1. Boost primary care services.
2. Decentralise specialist training and stop the protectionism from the Colleges. Boost the numbers of generalists.
3. Encourage the development of a safe widened scope-of-practice for non-medical health professionals

Read our full analysis of the Coalition’s health promises here , and our #AusVotesHealth manifesto drawing on a day-long health-focused Twitter festival during the election campaign.

A climate for change?

Sussan Ley’s elevation to the Environment portfolio could be a welcome development in terms of recognising the impacts of climate change on health, though — as noted in our election climate analysis — she has shown little appetite for this issue in the past.

A rural MP whose electorate takes in part of the politically-charged Murray Darling Basin, Ley is an interesting choice for the role, arguably the most important portfolio in the coming parliament.

Given Morrison described her ministry as having “a focus on practical and local environmental outcomes as well as waste reduction and recycling”, lofty ambitions are unlikely.

Congratulations to Sussan Ley for being appointed to Cabinet and made Australia’s 32nd Environment Minister. There’s so much work to do. I look forward to working together to protect the Bight, cleaning up our oceans and tackling the extinction crisis.

#Farrer MP @sussanley has been named as the country’s new Environment Minister. Could prove interesting given the ongoing discussion about the Murray Darling Basin Plan in her electorate.

Congratulations to @sussanley appointed as Environment Minister today. A big job ahead, @BirdlifeOz is looking forward to working with you to stop Australia’s #extinction crisis

Angus Taylor, who was embroiled in a controversy over water rights during the election campaign, continues as Energy Minister and has added Emissions Reduction to his title, with Warren Entsch appointed Special Envoy for the Great Barrier Reef.

Morrison didn’t see an issue in combining the seemingly contradictory portfolios of energy and emissions reduction:

If you look closely at the Climate Solutions Fund and the other initiatives related to meeting our emissions reduction targets – it’s Snowy 2.0, the Marinus Link, the Battery of the Nation project – these projects fall very much into the role of Energy infrastructure that Angus is closely associated with. So it made, I think, a lot of sense to bring that under the same banner. Angus has a lot of experience in dealing with these issues, a lot of technical knowledge on these issues and I think that will ensure these matters are well integrated.”

PrevPreviousBabies and toddlers are living with their mums in prison. We need to look after them better
NextHopes and questions as Wyatt makes Australian historyNext