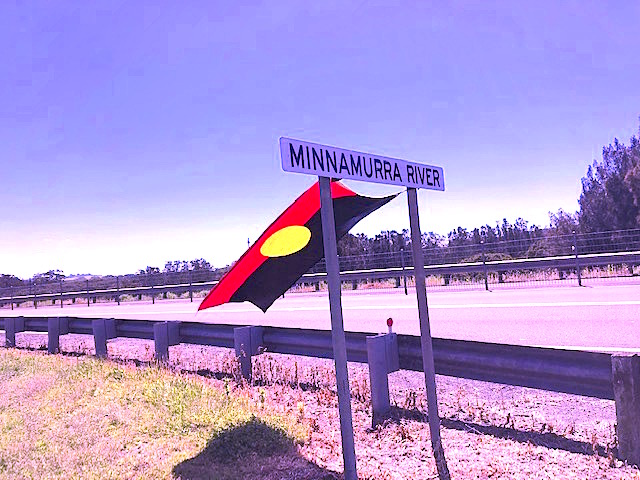 Flying the flag, for healing and acknowledgement

Historical truth telling as a healing intervention: an invitation to the health sector to engage

How can the health sector contribute to healing through historical truth telling about the nature of colonisation and its wide-ranging impacts upon Aboriginal and Torres Strait Islander people?

It’s a question the sector will increasingly be called to consider as momentum builds for historical truth telling, from local to national levels, together with growing acknowledgement of the importance of this for healing, health and wellbeing.

As Katharine Murphy wrote in The Guardian yesterday, describing the apology to the victims of child sex abuse in the wake of the Royal Commission into Institutional Responses to Child Sexual Abuse:

…institutions can be the architects of unspeakable horror and betrayal, and they can also be the agents of healing.”

Yesterday’s apology comes in the wake of a Truth Telling Symposium attended by more than 100 people in Sydney earlier this month (9 October), as Reconciliation Australia and The Healing Foundation brought together experts to develop a set of guiding principles to progress truth telling in Australia.

In a statement subsequently provided to Croakey, the Healing Foundation said truth telling was a major driver of this recent report, which found a direct link between the forced removal of tens of thousands of children from their families and the real life experiences of intergenerational trauma.

The Healing Foundation CEO Richard Weston said in the statement that truth telling was about the past, the present and the future:

The trauma we face in our day-to-day lives, either directly or indirectly, has its genesis in the violent early history of Australia’s Frontier Wars and the genocidal policies that followed, including the forced removal of children.

We must remember that the reason for removal in all policy documents was to give people a better life. The abuse our people suffered as a result demonstrates the exact opposite.”

Speakers at the Symposium included Canadian Truth and Reconciliation Commissioner, Dr Marie Wilson, and Aboriginal and Torres Strait Islander experts in areas such as the arts, healing, and cultural heritage.

Participants shared knowledge and experiences of truth telling to develop a fuller understanding of what truth telling should look like in the Australian context, and how individuals and communities can best be supported to safely and respectfully explore truth telling initiatives.

The symposium took place at Barangaroo, a Sydney precinct named after a Cammeraygal woman and leader who was influential in the early days of European colonisation. 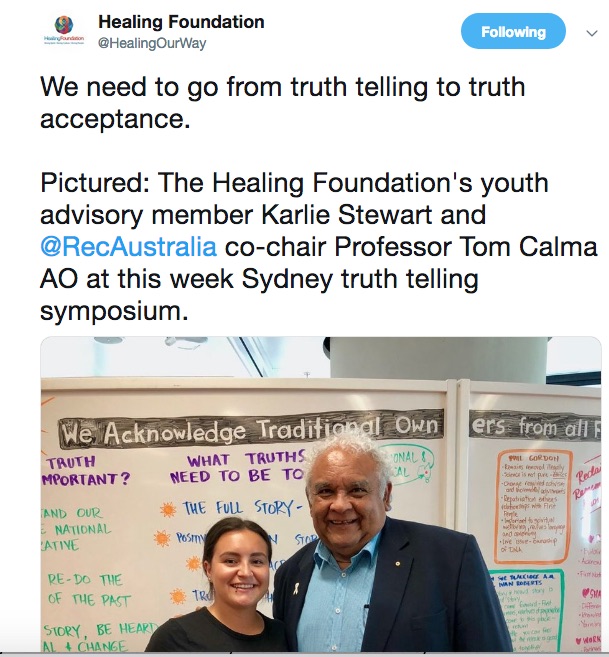 In its submission to the Joint Select Committee on Constitutional Recognition relating to Aboriginal and Torres Strait Islander Peoples, the National Congress of Australia’s First Peoples recommended the creation of a Truth and Justice Commission to supervise, amongst other things, the process of truth-telling.

It said the Commission be tasked with: investigating the histories of various Aboriginal and Torres Strait Islander nations; holding tribunals; recording findings in official reports for each nation; and setting up ‘keeping places’ for each nation.

Many individuals and organisations in the health sector have engaged with the Uluru Statement from the Heart’s call for a Makarrata Commission to supervise a process of truth-telling about Aboriginal and Torres Strait Islander peoples’ history and agreement-making between governments and First Nations.

In its submission to the inquiry, the National Health Leadership Forum, representing Aboriginal and Torres Strait Islander peak bodies, said:

Truth-telling and acknowledgment of the past injustices will establish a sound basis for further progress towards health and healing for Aboriginal and Torres Strait Islander peoples.

The need for truth-telling for the nation to understand and address past and ongoing trauma is crucial. Agreement-making processes that properly secure safety and opportunity for Aboriginal and Torres Strait Islander peoples is needed.”

The Lowitja Institute submission said it was “deeply disappointed by the Government’s outright rejection of recommendations of the Referendum Council”, and that a Makarrata Commission, established under legislation to enable agreement-making between governments and First Nations and truth-telling “is vital for the healing of Australia as a nation”.

Truth telling “acknowledging the uncomfortable and confronting aspects of our history” – needs to occur at local, regional and national levels if Australia is to come to terms with its past, the Institute said.

A personal submission by Professor Hugh Taylor said: “The need for a process of truth-telling is important and badly needed. We, mainstream Australians, need to hear, learn and know the stories and understandings of our First Nations people. The Truth Commission in South Africa was absolutely inspired and now Canada has followed the same process.”

“Alongside this change, there is a need for truth telling and for the true story/ stories of Australia’s history to be told. Whilst not without such implementation issues, the Truth Commission in South Africa was both challenging and healing for the peoples of South Africa. Canada has followed a similar process.

There are lessons to learn from both the South African and Canadian Commissions and the processes they have followed in working towards more united, truthful, and mature relationships amongst their Indigenous and non-Indigenous citizens.”

However, it is less clear from many such submissions how they propose as organisations, professions and individuals to take responsibility for their own contributions to these processes. As previously reported at Croakey, the Australian Psychological Society has provided leadership in this space.

A submission by Dr Judith Dwyer, Adjunct Professor, College of Medicine and Public Health, Flinders University, cited research showing that “the continuing impact of the doctrine of terra nullius, with its denial of the fact of dispossession and colonisation is still seen in the legal and policy framework of the Australian health system”.

While there are more than 200 pieces of legislation governing health and health care in Australia’s 9 jurisdictions, barely a handful of them address Aboriginal health at all, and none of them provide a basis of governance and accountability for Australia’s obligations to protect the health of Australian Indigenous citizens equally with other citizens, as is their human right.”

Truth telling will have an enormous impact on how policy is framed into the future – not based on the myth that Australia was settled peacefully but the reality of a violent colonising process and that there has been a profound ongoing transmission of intergenerational trauma.

When our policy makers accept and understand this history then it will help in understanding the scale of trauma that actually exists in our communities. We will have policy that matches our understanding of how we got here and will recognise the critical importance of engaging communities in solving their own problems.

A critical and urgent step towards healing and reconciliation is compensating Stolen Generations for the pain and hurt caused by their forced removal from their families and communities. Without addressing the unfinished business of Stolen Generations it is difficult to imagine that meaningful settlement of matters between the settlers and the first peoples is possible.”

Meantime, the efforts of many local communities are helping to build momentum for truth telling – from Waterloo Bay in South Australia, to the Myall Creek Memorial in northern NSW, and beyond.

The photographs below are from a public memorial held on 1 October near the Minnamurra River south of Sydney, to remember a massacre in that area 200 years previously. 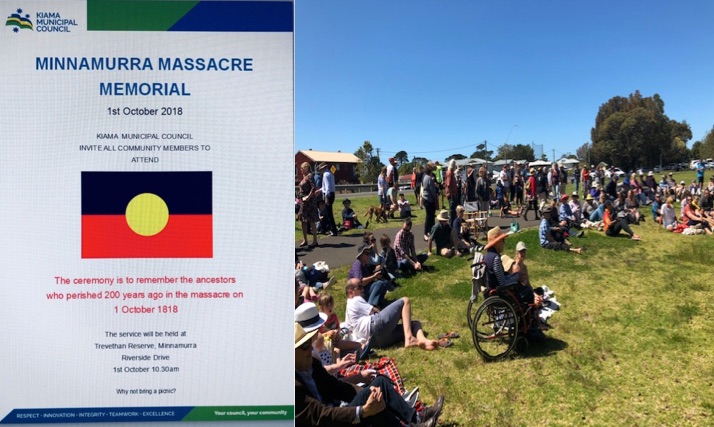 The event was organised by Aunty Trish Levett, the Aboriginal liaison officer at Kiama Municipal Council, and addressed by the Mayor and a local councillor.

Aunty Jodi Edwards talked about the importance of people coming together for such events, and said the area’s significance for the Wodi Wodi people of the Dharwal nation extended tens of thousands of years before the massacre. It was a place “of immense cultural significance”, she said, where people fished, made tools, feasted, dance, sang and shared and passed culture to their children.

Howard Jones, a non-Indigenous local resident who has worked closely with the Aboriginal community, urged the crowd to be mindful of not only the massacre, but also to recognise that it was part of dispossession, the theft of land and other colonial violence.

“In acknowledging the massacre that occurred here after 200 years, at last the silence has been broken and now we can start to teach our children and discuss our history because it’s a shared history,” he said.

Processes of acknowledgement must do more than focus on the impact of colonisation; they must also pay respect to the tens of thousands of years of cultural connection, knowledge, and caring for country.

“I would like our international visitors to understand that when visiting Australia, you are standing on the country of people who have survived.

We have a long history of resistance against oppression, and of fighting for our human rights. We are strong, proud human rights warriors.”

The health sector has an important role to play in such historical truth telling; as Katharine Murphy’s comment indicates, this is on two counts: because of its historic and ongoing role in causing trauma, and because of its capacity for contributing to healing.

But how to do this?

As per the invitation below, Croakey readers are invited to participate in a public act of truth telling, acknowledgement and healing in Carnarvon, Western Australia, on 9 January 2019, with a yarning circle to be held the next day.

The ceremony will mark 100 years to the day, so far as we can establish, since the return to the mainland of the last of the several hundred Aboriginal people exiled to the remote Bernier and Dorre Island lock hospitals between 1908 and 1919.

More details about the history of medical incarceration of Aboriginal and Torres Strait Islander people are in this recent short presentation to the World Hospital Congress in Brisbane, which I delivered on behalf of co-authors Kathleen Musulin and Bob Dorey, who will be honouring ancestors at the Carnarvon ceremony.

Dr Robin Barrington, a Yamaji scholar who has researched lock hospital histories and will also participate in the Carnarvon ceremony, says:

I believe that in a spirit of ‘healing through history’, we all have a responsibility to tell the many untold stories of injustice and abuse against Aboriginal peoples across Australia that continue to ramify into the present.”

See you in Carnarvon?

PrevPreviousAn apology on behalf of the Australian people to those who were ignored for so long
NextClimate change: Nauru’s life on the frontlinesNext