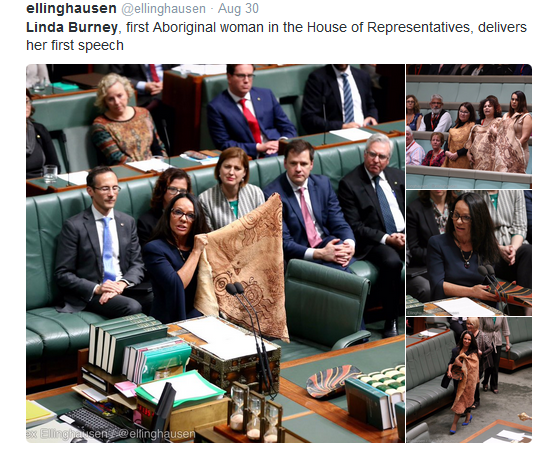 That day the truth was told in this place & the power of generosity was writ large.

It’s no surprise we often expect only politics and point scoring from Parliament. But sometimes it transcends itself, and creates moments for history.

It did so last week as the 45th Australian Parliament opened and heard the ‘maiden’ speeches of two new Labor MPs – Senator Patrick Dodson, long-held as the ‘father of reconciliation’ and Linda Burney, the first Indigenous woman elected to the House of Representatives.

They were each extraordinary speeches – rich in culture, steeped in pain, urging a generosity of spirit, and both sounding a warning on the lessons of history and the risks of divisive debate.

It was something not seen or heard before in Australia’s Parliament, as Linda Burney’s Wiradjuri sister, Lynette Riley, sang her into Parliament in traditional language.

Watch this video at Guardian Australia

Bearing a kangaroo skin cloak that charts her life – “on it is my clan totem, the goanna, and my personal totem, the white cockatoo”, Burney said the significance of a first speech was not lost on her:

It is defining; it sets out what has made you, what you believe in and what you stand for. It talks about the seat and the people whose hopes, hurts, aspirations and loves you carry into this place. It talks of the deep affection you have for those people.

It’s hard to pick out single quotes from such a speech, which she opened in the language of the Wiradjuri, paying respect to the traditional owners of the seat of Barton—three clans of the Eora, the Bidjigal, the Gweagal and the Badigal.

Swearing to bring “the fighting Wiradjuri spirit” into Parliament, she lay out her priorities: education, lifting the birth weight of Aboriginal and Torres Strait Island children – “an increase of 191 grams could change lives”, reducing the rate of juvenile incarceration, addressing the challenge of domestic violence, taking seriously our custodianship of land, and treating people with respect and empathy.

“Too often these calls to amend the Racial Discrimination Act come from those for whom this kind of discrimination it totally alien. I can tell them that it is hurtful.”

She talked about being born at a time when the Australian government knew how many sheep there were but not how many Aboriginal people, of the irony that her seat of Barton is named after the architect of the White Australia policy but has become one of the most multicultural in the country, and that she didn’t meet herWiradjuri father until she was 28—his first words to her were, ‘I hope I don’t disappoint you.’

His name was Nonni Ingram, Lawrence Ingram, of the great Wiradjuri Ingram clan. Nonni and his wonderful wife Launa had 10 children. Ten brothers and sisters I didn’t know existed! We grew up 40 minutes apart. The power of racism and exclusion were not things you could see, but you certainly felt them.

Burney also talked to the power of change and of generosity, as she described “one of the most remarkable moments of my life”, being in the same parliamentary chamber, in 2008, when then Prime Minister Kevin Rudd delivered the apology to the Stolen Generations. As important as its delivery, she said, was the way it was received by Aboriginal and Torres Strait Islander people:

Our nation had been holding its breath for a long time, waiting for three words: ‘We are sorry.’ There was the stubborn refusal of the previous Prime Minister to apologise for policies which had ripped many thousands of Aboriginal children from their family, culture and country—the devastating effects still felt today. But around the perimeter of this chamber sat some of those children, now old people, still wearing the scars of forced removal on their faces. They were joined by all surviving prime ministers bar one.

Finally, as the words rang out across this chamber, across this land and around the world, ‘For this we are sorry,’ the country cried and began to breathe again.

Burney said that, as the speeches concluded, two women stood and handed Rudd an empty coolamon.

Friends, a coolamon is what we carried our babies in, which is what made it such an amazing, generous thing to do. It was profound, a gesture that made us all better people.

So she too carried an empty coolamon into the chamber, “as a reminder of that moment, of the power we exercise in this building today, and that it must be for the good of all.

It must be gracious. It it has not always been so. But it can be. That day the truth was told in this place, and the power of generosity was writ large.

Read her full speech here or watch it delivered below:

Dodson told the ABC, in this backgrounder about his speech, that he had approached the Senate President Stephen Parry in the parliamentary corridor and asked if he would respond in Yawuru language to his opening words.

Parry agreed, with the promise of a bit of coaching, and their exchange is recorded in Hansard:

Dodson told the chamber that the Yawuru language holds three key concepts which shape his people’s ways of knowing and understanding and which will inform his work in the Senate, “as they have formed my being”.

They are: Mabu ngarrung, a strong community where people matter and are valued; Mabu buru, a strong place, a good country where use of resources is balanced and sacredness is embedded in the landscape; Mabu liyan, a healthy spirit, a good state of being for individuals, families and community. Its essence arises from our encounter with the land and people.

These concepts are not newly minted. They come from the time before time began. We call this the Bugarrigarra—from when the earth was soft and yet to be moulded and given its form by the creative spirits. The Bugarrigarra encompasses the time well before Western philosophy, religion and laws existed or travelled to our lands in ships.

Dodson talked about the landmark 2006 federal court decision, after 12 years of litigation, that recognised the native title rights of the Yawuru and the Indigenous land use agreement that followed to settle key matters of land tenure and governance – though far from all and certainly not fundamental matters of colonisation, dispossession and sovereignty.

He said his priorities were to:

With Coalition and crossbench Senators signalling they want to wind back protections under Section 18C of the Racial Discrimination Act, Dodson recognised Parliament as the “sanctuary of free speech” but he warned sharply that debates must be informed by the fundamental principles of respect for the diversity and richness of all cultures in Australia, and the recognition of “our shared humanity”.

He reminded his new colleagues that racism and paternalism have led in the past to “bureaucratic systems and processes that controlled the lives of our people; stifling life choices; creating the sorrow, pain and anguish of children ripped from the arms of their mothers.”

I was born before the constitutional changes of 1967. I was hiding in the long grass in the Northern Territory town of Katherine and watched my age-mates being taken by welfare and police. In Katherine I also watched in fear as white people were bussed in to the town hall meeting, where they vented their hatred and anger against Aboriginal stockworkers for walking off Wave Hill Station and for demanding justice and equal wages.

The Australian law at that time was unarguably founded on a social outlook that was highly ethnocentric, even racist. Many of the laws were genocidal in intent, application and consequence. The same moral compass justified the American laws that mandated racial segregation in the US before the civil rights movement. Such views and laws led to the horrors of Soweto and Robben Island and even the hate crimes of Nazi Germany.

Dodson talked about the privilege of attending last month’s 50th anniversary of the Wave Hill walk-off, led by Vincent Lingiari. He related the grand words of then Prime Minister Gough Whitlam as he handed over the title to the Wave Hill station in 1975, and the response from Lingiari in Gurinji, which was translated as :

Let us live happily as mates, let us not make it hard for each other.

Dodson said such a response was a testament to Lingiari’s strength, resilience and generosity of spirit – and inspiration for all Australians.

After a century of theft, of violence, of dehumanising exploitation, of structural and institutionalised racism, of a stolen generation policy, genocidal in its intent and its impact, this leader was ready to move forward to build a better place.

Vincent held a vision for his people’s freedom—a vision based on fair treatment, getting country back and getting people back on country. His vision was for equal wages, for a self-sufficient, independent, economically secure and culturally grounded community free from oppression and degradation.

This vision was never fully realised, but it remains a worthy vision for us all.

Read his full speech or watch it below: 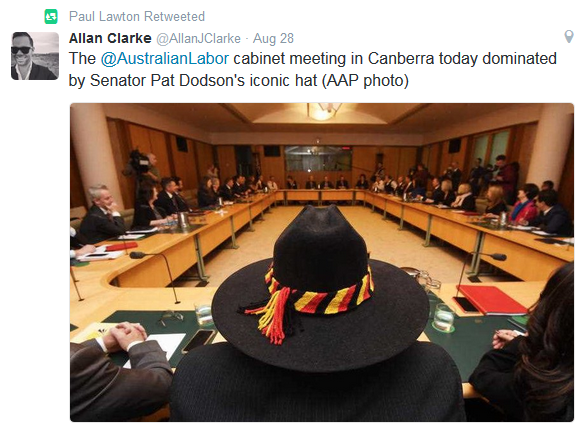