Hopes on new Closing the Gap agreement, systemic reform and funding, after “intolerable gaps” in 2020 report

Aboriginal and Torres Strait Islander groups and leaders on Wednesday expressed hope and optimism that the new Closing the Gap agreement — being developed, for the first time, in partnership with them — may begin to turn around “absolutely intolerable” gaps in life expectancy, health outcomes and child mortality rates revealed in the latest scorecard.

However, they warned that it must deliver systemic reform and “tangible funded actions” to deliver real change.

Handing down the “stark and sobering” 2020 Closing the Gap report, Prime Minister Scott Morrison today pledged a new way forward through the new agreement that he has fostered between the Council of Australian Governments (COAG) and the Coalition of Peaks, representing more than 50 Aboriginal and Torres Strait Islander  groups.

The Coalition of Peaks said it hoped the agreement, to be finalised in the coming months, would be the urgently needed “circuit breaker” on Aboriginal and Torres Strait Islander health inequity, so long as it does not amount to just “window dressing”. 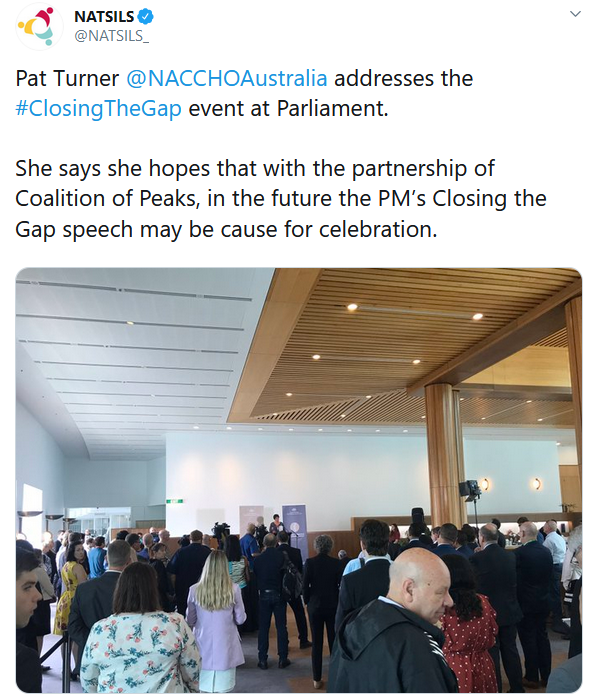 In the annual Prime Minister’s Closing the Gap speech to Parliament, the 12th since it was launched in 2008 and “the final report on an old approach”, Morrison also promised that every Minister in his government would be a Minister for First Australians as part of a whole-of-government approach on Indigenous affairs.

But Indigenous Labor Senator Malarndirri McCarthy, and others, pointed to the harm being done by many existing government policies and past and ongoing funding cuts in a range of areas. 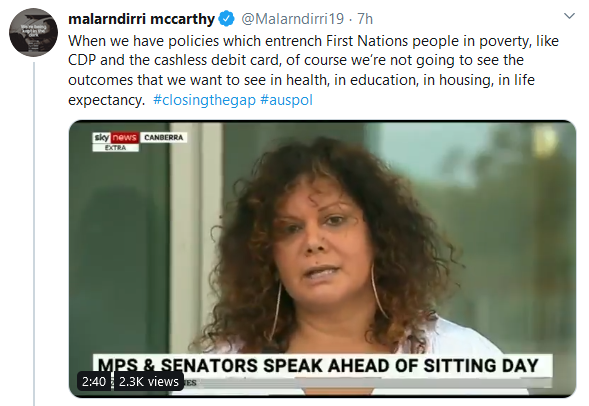 Others criticised Morrison’s language and focus as he talked about Indigenous disempowerment, of the need to “restore the right to take responsibility, the right to make decisions, the right to step up”. 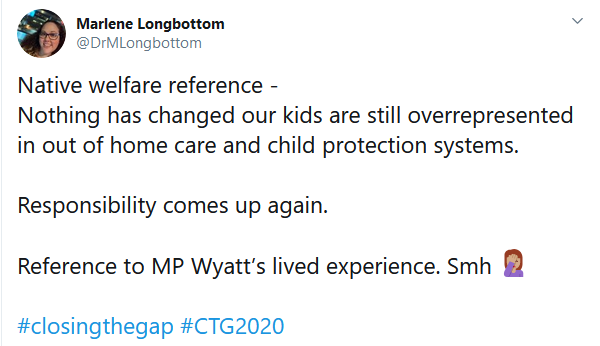 McCarthy also pointed to the $500 million cut into Indigenous funding in the savage 2014 Federal Budget, and the critical importance of implementing the Uluru Statement, with its calls for a Voice to Parliament and truth telling.

“All of these things are connected to Closing the Gap and improving the lives for First Nations People,” she said.

As widely reported ahead of the Prime Minister’s speech, the 2020 Closing the Gap report revealed that only two of the seven targets are on track to be met this year. 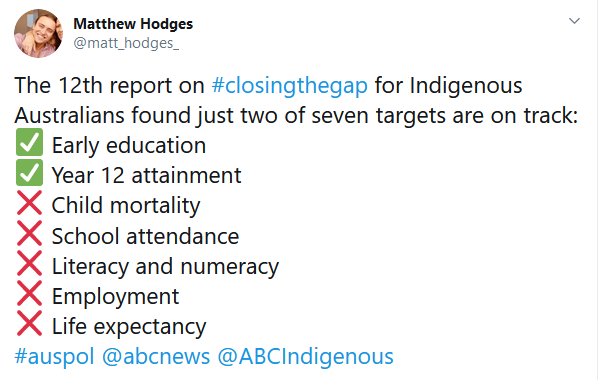 Australia is on track to halve the gap in Year 12 attainment, and to have 95 per cent of Indigenous four-year-olds enrolled in early childhood education by 2025, but not to halve the gaps in child mortality, child literacy and numeracy and employment, nor to close the gap in school attendance and in life expectancy.

This year’s report was “the same familiar disappointing story”, said the Close the Gap Campaign, which is made up of peak Indigenous and non-Indigenous health and human rights bodies and will release a formal response to the report next month.

Every year for the last 12 years we have listened to a disappointing litany of failure – it’s not good enough, Indigenous Australians deserve better.”

Oscar and Briscoe said they were “heartened” by the historic partnership between COAG and the Coalition of Peaks, however now that it was in place, “governments must commit to urgent funding of Indigenous healthcare and systemic reform”. Via Twitter, they highlighted these seven steps to Close the Gap. 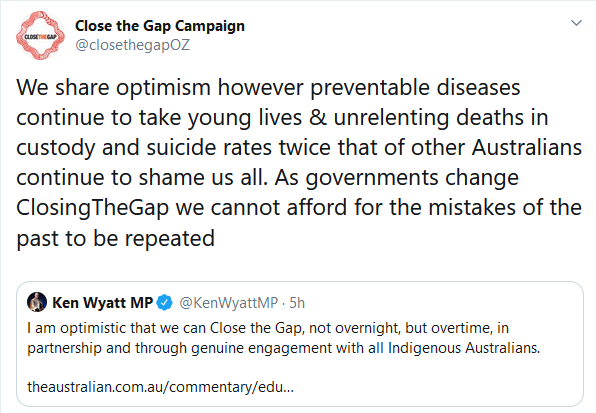 Time for a serious circuit breaker

In a hard hitting Opinion piece ahead of the report, Pat Turner, the lead convenor of the Coalition of Peaks and CEO of the National Aboriginal Community Controlled Health Organisation (NACCHO), said successive governments had misled the public by painting lack of progress on Closing the Gap targets as something outside their control.

Busy talking up the steps they were taking to close the gap, at the same time governments have been ripping funding from dedicated Aboriginal and Torres Strait Islander programs and services and silencing our voices.”

In a statement today, the Coalition of Peaks said the Closing the Gap reports tell a “seemingly endless cycle of failure” that breeds complacency and cynicism, while excusing those in power.

The truth is that the existing Closing the Gap framework was doomed to fail when it was designed without the input of Aboriginal and Torres Strait Islander people. We know what will work best for our communities and the Prime Minister even acknowledges in this report that our voice was the missing ingredient from original framework.

Turner said the historic partnership of the Coalition of Peaks and COAG “could be the circuit-breaker that is needed” but it must go beyond “window dressing for the status quo”, and government support for the three Priority Reforms identified in the engagement process so far must be translated into “tangible, properly funded actions”. 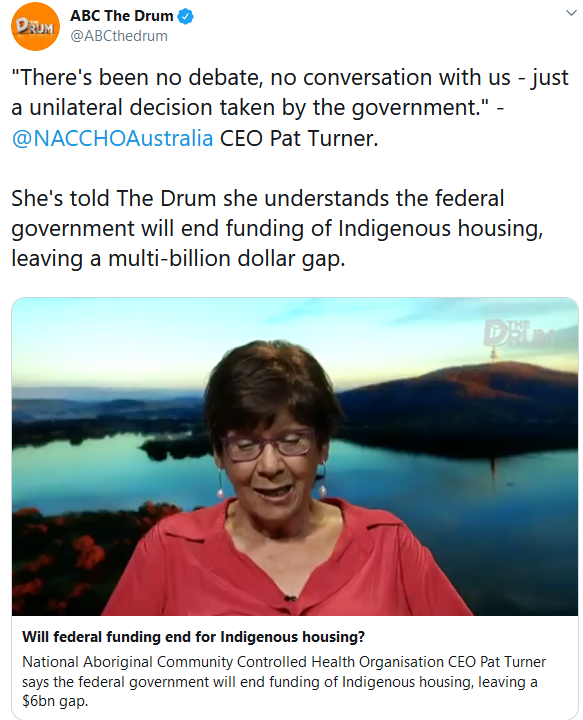 Croakey is seeking more information on this, but the National Aboriginal and Torres Strait Islander Legal Services (ATSILS) on Wednesday also expressed deep concern about the prospect, saying “access to safe and affordable housing is essential to Closing the Gap”.

In a statement, NATSILS called on the Federal Government to “learn form the previous failures” on Closing the Gap, saying the gap will widen “if reforms aren’t translated into tangible, fully funded actions that deliver real benefits to Aboriginal and Torres Strait Islander people throughout the country”.

“The Federal Government needs to commit to funding solutions to end over-imprisonment of Aboriginal and Torres Strait Islander people and they must be implemented alongside other areas of disadvantage in the Closing the Gap strategy – health, education, family violence, employment, housing – in order to create real change for future generations.”

“An ingrained way of thinking”

As he did last year, Prime Minister Morrison conceded that previous Closing the Gap efforts, “despite the best of intentions”, had “perpetuated an ingrained way of thinking… that we knew better than our Indigenous peoples”.

In his speech, he revealed a personal story of having visited a group of Ngunnawal Elders, with his family, for a water blessing on the afternoon before Australia Day. He said:

It was hot, there was smoke from the bushfires in the air. I was grateful for the generosity and grace displayed by the Ngunnawal people to host a Prime Minister and his family at a poignant time when they reflect on their own long history since time immemorial.

Yet on that afternoon, my Ngunnawal friends were more concerned about what they called my Sorry Business Time and the recent passing of my father. They were concerned for my girls and their loss.

They had words and space for grief – and we sat together. I want to thank Aunty Agnes Shea for her hospitality and kind words.

Be it grief; the protection of our lands against bushfire; an understanding of our native ecosystems; or the inter-generational responsibilities to the land and to each other; there is so much we learn from Indigenous communities and peoples.

So I ask: what have we been too proud to learn? What must we learn so that we can grow together?”

Morrison also read from a file of the Native Welfare Department, which contained a memo to the Commissioner of Native Welfare about whether a boy – the young Minister for Indigenous Affairs Ken Wyatt – should be provided pocket money of 75 cents a week.

Without appearing to reflect on government policy such as welfare cards, he said:

Think about a life where even the most basic decision making is stripped away from you – by governments thinking they know better.”

Morrison also committed his government to constitutional recognition, although the road continues to be rocky, with reports that Indigenous leaders have been barred from pursuing constitutional reform within the government’s new peak advisory group on a voice for First Australians and concern that the Voice to Parliament, urged in the Uluru Statement, is being pursued as a lesser voice to government.

In his Closing The Gap reply, Opposition Leader Anthony Albanese said there is a danger that the Uluru Statement will “end up remembered as a noble moment, but not as a turning point.” He said:

“We cannot allow that to happen,” he said, adding that the Voice proposal is a “modest request”.

It is not a third chamber. It is not deliberative. It merely seeks to put a structure around what we would all regard as decency, courtesy and respect.”

Enshrining the Voice in our Constitution is a great and unifying mission – more than a century overdue.” 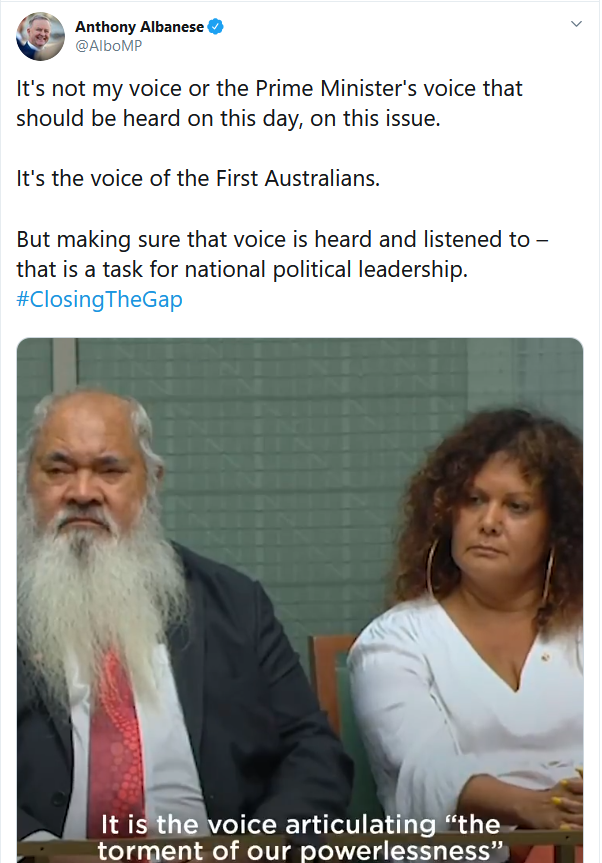 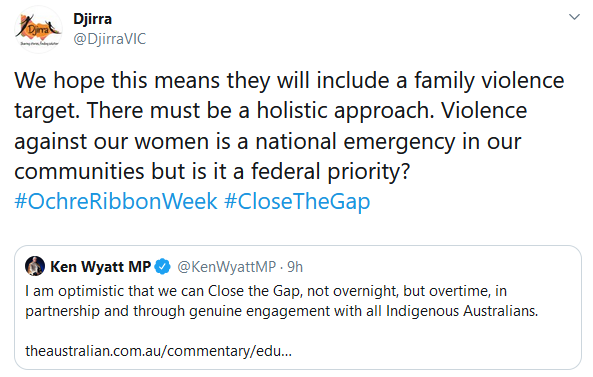 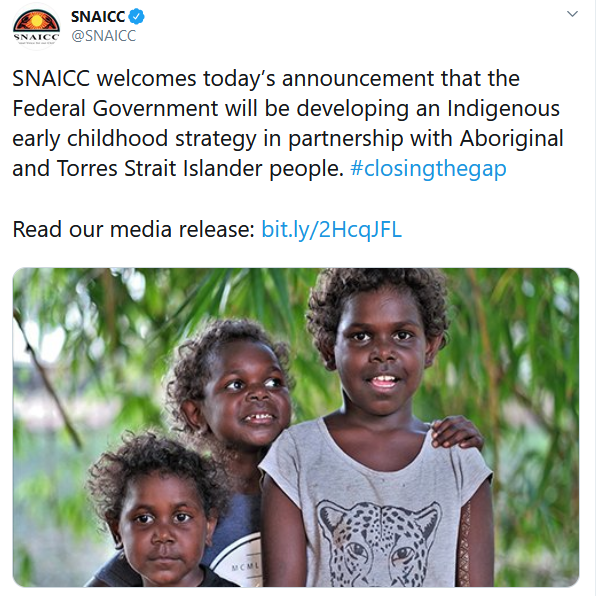 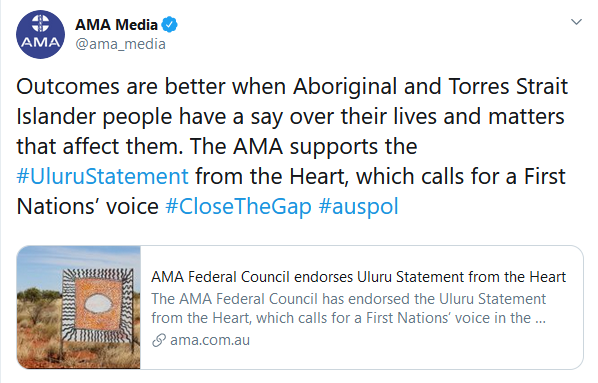 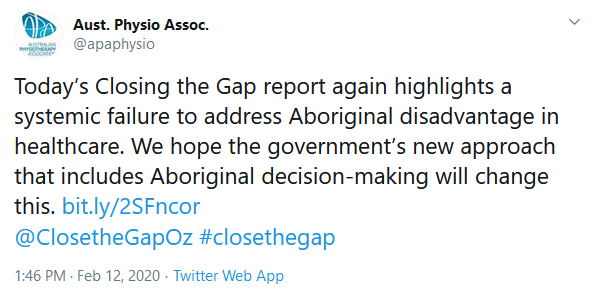 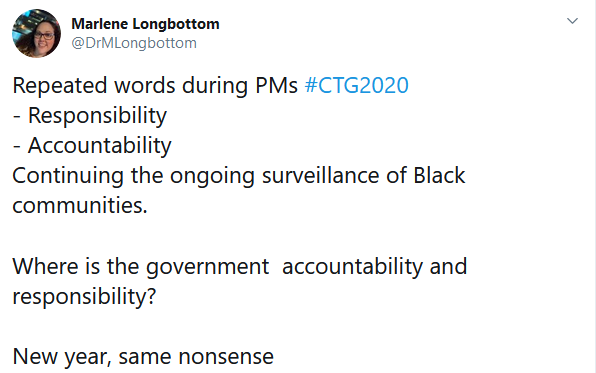 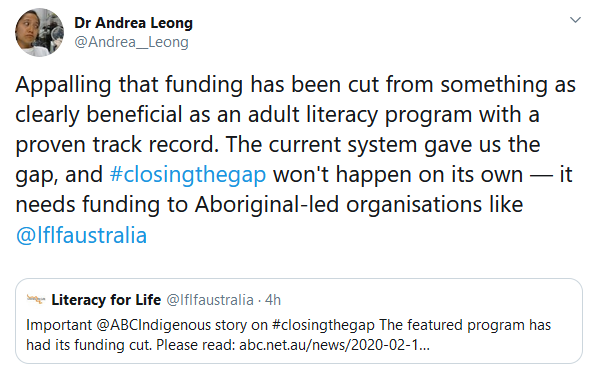 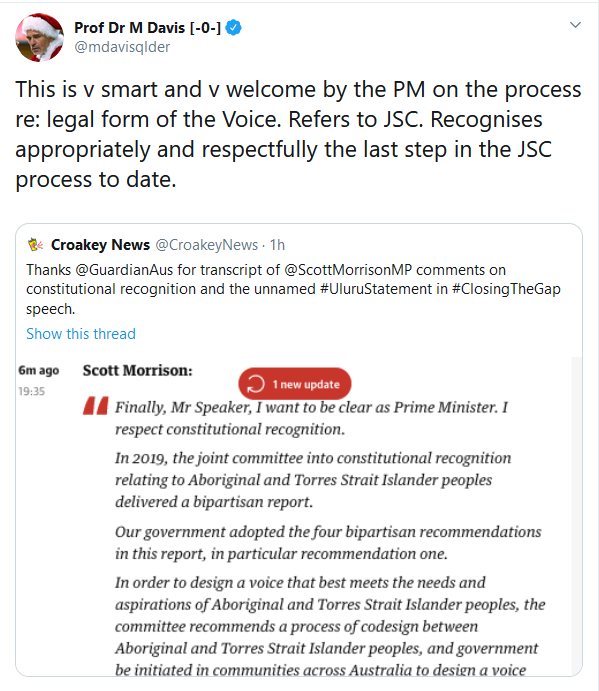