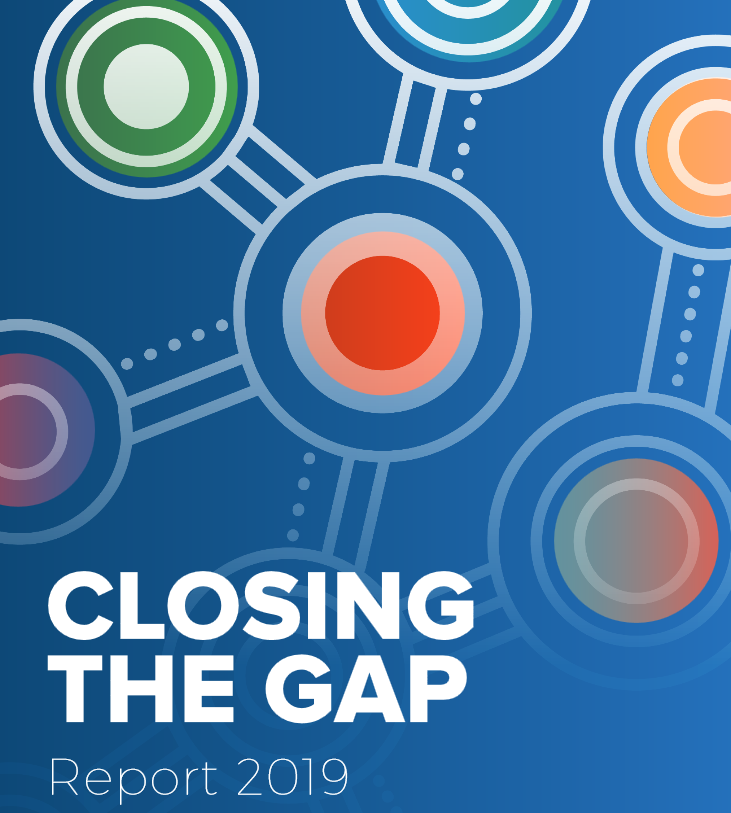 Hopes on strong, timely Closing the Gap partnership, after targets remain out of reach

Aboriginal and Torres Strait Islander groups on Thursday said it is imperative that a true and formal Closing the Gap partnership agreement be put in place soon and with the real capacity to develop better targets and strategies to meet them.

That follows the latest disappointing results in tackling inequalities in Indigenous health and wellbeing, described as “unforgiveable” and “set up to fail (from the beginning)” by Prime Minister Scott Morrison, in his first Closing the Gap report to Parliament (see more below).

In the lead up to the tabling of the report today, Healing Foundation CEO Richard Weston told NITV that PM Scott Morrison’s commitment to a formal partnership with Indigenous groups on Closing the Gap was “an exciting development” but the “proof will be in the pudding”.

He later told Croakey he was concerned the Federal Government might be “kicking the can down the road” on real progress until after the election.

National Family Violence Prevention Legal Services (FVPLS) Forum convenor Antoinette Braybrook said it was imperative for Australian governments to have an agreement in place by the end of February with the coalition of more than 40 Aboriginal and Torres Strait Islander health and justice groups, so all stakeholders can get onto the “nitty gritty” of the Closing the Gap Refresh with new targets set to be finalised by mid year.

Last year Aboriginal and Torres Strait Islander groups had expressed deep frustration at being left out of the Refresh process, which was set in motion after continued failure by Australian governments to meet the seven targets.

Crisis talks with Morrison led to the Council of Australian Governments (COAG) committing in December to a “genuine formal partnership” with Aboriginal and Torres Strait Islander groups on revising and adding targets and new measures of accountability for government.

Braybrook told Croakey members of the Indigenous coalition have been working tirelessly to get an agreement.

“All of the elements of the partnership are there, we just need them (governments) to sign off on them by the end of the month,” she said.

Braybrook, who is urging a family violence target, said she was surprised to hear Morrison make a new specific commitment to Closing the Gap on education today – that is, to remove HECS debts on teachers who work in remote communities – without consultation with the peak body coalition.

She welcomed commitments from the Federal Opposition on support for key tenets of the Uluru Statement from the Heart – including a referendum on enshrining a Voice in the constitution within a first term – plus a summit, in the first 100 days in office, on the removal of Indigenous children, and a gathering of Indigenous leaders in the first week.

In its response to today’s report, Change the Record expressed disappointment that the draft revised COAG targets still do not go far enough to combat the ongoing impacts of colonisation.

“We are disappointed that justice and housing targets are being pushed onto the states, family violence and child removal targets are considered “optional”, and disability was forgotten altogether,” said co-chair Damian Griffis.

“These are critical issues for our community that require meaningful leadership from the Commonwealth to close the gap.”

In its statement on the “disappointing” Closing the Gap 2019 report, the Australian Medical Association said it supported the coalition that has formed to be signatories to the partnership agreement with COAG, “and for them to share as equal partners in the design, implementation and monitoring of closing the gap programs and policies”.

Failure reflects “hubris of this place”

As widely reported ahead of the PM’s speech, this year’s Closing the Gap report shows only two of the seven targets – child mortality and Year 12 attainment – are on track, down one on last year. 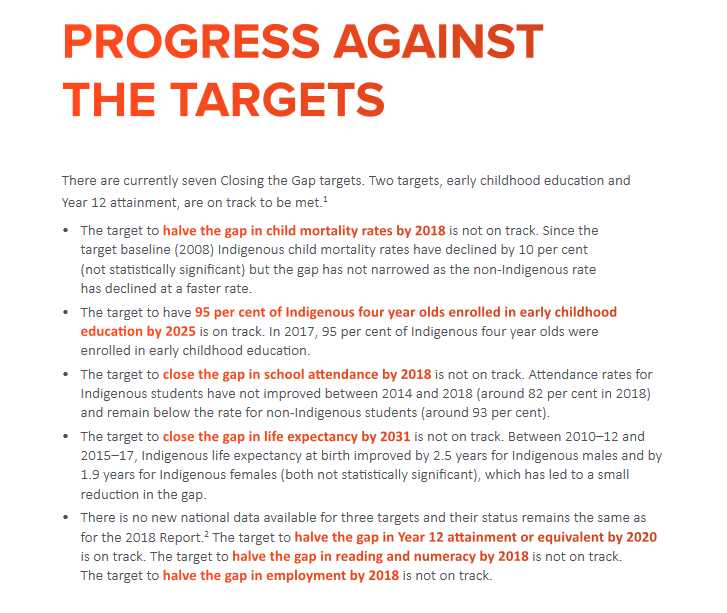 With initiatives like financial incentives for teachers in remote areas, Morrison signalled in his speech that education would be his main imperative in the Close the Gap Refresh while Indigenous Affairs Minister Nigel Scullion announced a boost to procurement policies for Indigenous businesses.

The Prime Minister addressed the failure of the Closing the Gap process from its beginning to truly partner with and be accountable to Indigenous people, saying that “while guided by the best of intentions, the process reflected something of the hubris of this place”. He said:

“It believed a top-down approach could achieve the change that was rightly desired. That Canberra could change it all with lofty goals and bureaucratic targets.

It was set up to fail. And has, on its own tests. And today I am calling that out.

This was not a true partnership – not with the states and territories, or with Indigenous peoples themselves.

Yes, there was more funding, programs, workers, and accountability – but this was just another version of what we were already doing, so often unsuccessfully, in different forms, for generations.”

However, he failed to mention the Uluru Statement and the impact on Indigenous health and wellbeing of the 2014 Indigenous Advancement Strategy, which stripped more than $500 million in funding from Indigenous communities and organisations.

You can read his speech here.

“Gaps between words and actions”

Opposition Leader Bill Shorten’s speech delivered more for Aboriginal and Torres Strait Islander people, including recognition of their frustration with ongoing failures to address the “gap between words and actions, the gap between promises and results”.

He said he recognised that that the coalition of peak bodies negotiating a Closing the Gap partnership has done “the heavy lifting, to date, with limited resources” and congratulated them for “refusing to meekly accept the draft framework that was presented to you as a fait accompli in the past and instead, asserting your right to a permanent place at the table.”

Shorten told Parliament it needed to “admit racism still exists in 2019” if politicians are to stop “wasting the time of First Australians” with Closing the Gap reports.

Reiterating Labor’s support for the Uluru Statement, in comparison to the Coalition, he said so many governments have said they want to work with Aboriginal and Torres Strait Islander people but continue to try to tell them what to think.

“If we say that we want partnership with our first Australians, then we don’t get  to pick and choose our partners’ values or priorities,” he said. 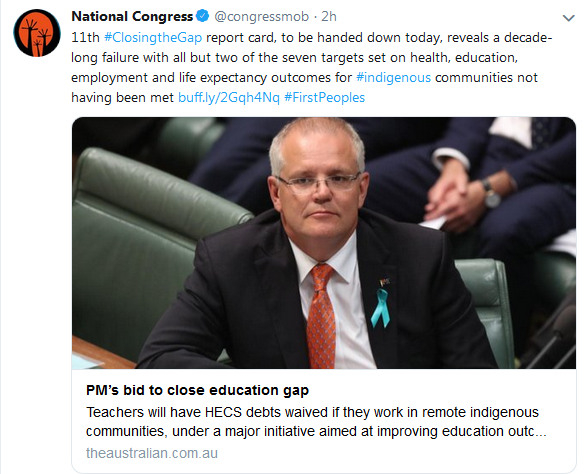