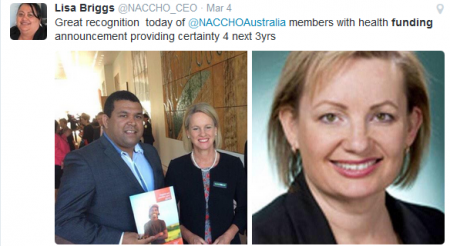 There was much relief and rejoicing in March when Health Minister Sussan Ley and Assistant Minister Fiona Nash announced that funding for 112 Aboriginal and Community Controlled Health Organisations (ACCHOs) had been secured for the next three years.

Now there is new uncertainty and stress as the organisations have learnt what they have to do in a very tight timeline to be eligible for that funding – and if they still are.

A spokeswoman for the Department of Health told Croakey today: “Most organisations will be offered three years funding, but services assessed as high risk may be offered a 12 month agreement.”

In mid-April (at the earliest, according to our information), organisations were given until May 13 to submit action plans and to include Continuous Quality Improvement activities, which the Health department acknowledged may be a new area for some organisations.

One source told Croakey the timeline was causing additional pressure for already stressed organisations: “think of the ACCHOs in WA struggling with the forced closures of communities”.

Aboriginal and Torres Strait Islander people, communities, and organisations often live with a stressful policy environment – but stressful processes and timelines also can impact on their ability to ‘compete’ for funding.

This has also been evident under the “cuts and chaos” of the Indigenous Advancement Strategy (IAS) – with the Department of Prime Minister and Cabinet revealing this week that only 45 per cent of funding went to Aboriginal and Torres Strait Islander organisations (see more below).

Queried re the ACCHO process by Croakey, the Department of Health has provided the following detail:

On 5 March 2015 the Minister for Health, Sussan Ley MP, and the Assistant Minister for Health,  Fiona Nash, announced arrangements for the future funding of health care organisations that provide primary health care to Aboriginal and Torres Strait Islander people under the Indigenous Australians’ Health Programme.  Since that time the Department of Health has been in touch with many organisations through Departmental contract managers.

In Mid April this year, Aboriginal community controlled health services (ACCHS) received an email/letter containing advice on the commencement of negotiations with the Department of Health for primary health care service funding under the Indigenous Australians’ Health Programme (IAHP) for the period 2015-16 to 2017-18. A copy of the content of the letter is provided below.

Most organisations will be offered three years funding, but services assessed as high risk may be offered a 12 month agreement.

As you will see in the letter, ACCHS have been invited to submit updated action plans and a budget based on their 2014 -2015 funding plus indexation, which will be assessed prior to any offer of funding agreements.  They were also advised that they will need to address Continuous Quality Improvement CQI in their action plans. A fact sheet on CQI was provided with the letter.

The letter also flagged that further information (would be forwarded) for the assessment process including:

This additional information was provided to ACCHSs last week.

Once the Department has completed the assessment process, a formal offer will be made in time for successful ACCHS to have a funding agreement in place by 30 June 2015.

The spokeswoman provided the text of the letter sent to organisations providing primary health care services under the IAHP (including ACCHS):

On 5 March 2015 the Minister for Health and Minister for Sport, the Hon. Sussan Ley MP, and the Assistant Minister for Health, Senator the Hon. Fiona Nash, announced arrangements for the future funding of health care organisations that provide primary health care to Aboriginal and Torres Strait Islander people under the Indigenous Australians’ Health Programme.  Local announcements have also been made by some MPs.

On behalf of the Commonwealth, I would like to advise that this letter constitutes the commencement of negotiations with your organisation.

As part of these negotiations, your organisation is now invited to submit a proposal by 13 May 2015, which will consist of an updated Action Plan and Budget based on your 2014 -2015 year’s funding plus indexation.

Please note that activity for Continuous Quality Improvement (CQI) will need to be addressed in your updated Action Plan.  This may be a new activity for you so a CQI Fact Sheet has been developed to assist (Attachment A).

Prior to formal offer, the Department is required to assess your action plan and budget.  If there are any issues with your proposal that need clarification Departmental Officers will contact you.

The Department will be writing to you again at the end of April to provide the remainder of the package and again, Departmental Officers are available for discussion.

Following successful negotiation of a proposal, and formal written approval by the Department’s Delegate, the Department will be in a position to make a formal offer.

Please note that this letter does not constitute a formal offer, and no legal obligations shall arise unless and until a contract is signed by the Commonwealth.

Describing the stress this had put organisations under, a source told Croakey:

They have been invited to submit a proposal by May 13th. This does not guarantee an extension of funding.

Then by December 2015 we must have a CQI (Continuous Quality Improvement) Plan.

As for the Action Plan and budgeting, this is done every year but given that we have only three weeks to prepare and submit, we have employees that need CONFIDENCE that they have ongoing employment. We submit the plans on May 13 and then have 6 weeks to negotiate with government to get our committed 3 year funding as per Ministers Ley and Nash on March 5. Now think of the ACCHOs in WA struggling with the forced closures of communities.  Planning for service provision, housing, education and social emotional wellbeing….. 3 weeks isn’t a long time to prepare for the next 3 years.”

Public Health Association of Australia CEO Michael Moore said a short turnaround for such a process is unfair and particularly onerous for organisations needing to maintain service delivery – especially given this involves extensions to existing arrangements.

“We understand the need for the department to be able to assess proposals for longer periods (like three  year agreements) but organisations should be given reasonable timeframes to develop thorough proposals,” he said.

And re the CQI requirement: “These measures need to be well-planned and may well require additional resourcing to implement. Again, it’s unfair to have to whip up proposals in short timeframes that have long-term implications…”

Moore added: ” And we would be flabbergasted  if the department was able to do their own turn around in the same time frames that they ask of NGOs.”

A week out from the May 12 Federal Budget, the Opposition today said Prime Minister Tony Abbott must reverse the $534.4 million cuts to Indigenous affairs from last year’s Budget, warning that Indigenous Advisory Council chair Warren Mundine has suggested  another $600 million could be on the chopping block (The Australian, 4 June 2014).

As the ABC reported this week, less than half of the successful applicants for the first round of the Indigenous Advancement Scheme funding scheme were Aboriginal and Torres Strait Islander organisations.

The number was confirmed in the submission by the Department of Prime Minister and Cabinet to the Senate inquiry investigating the funding process (click on image below) which said $860 million in funding had been allocated so far for 964 organisations to deliver 1,297 projects:

There are many interesting submissions going up on the inquiry’s site, including from the Victorian Aboriginal Community Controlled Health Organisation (VACCHO) which speaks also to the hostility of process on smaller Aboriginal and Torres Strait Islander organisations. 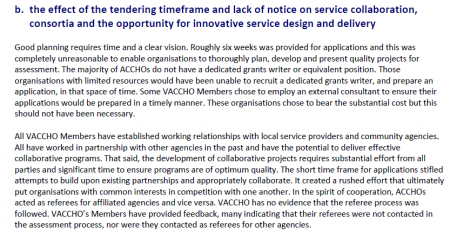 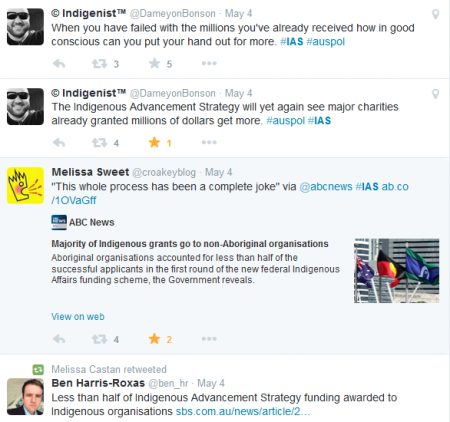 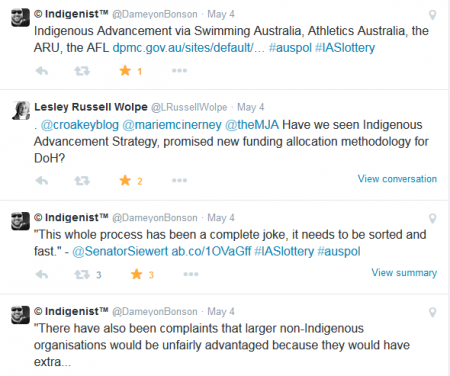 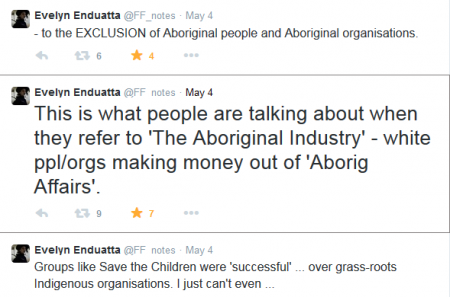