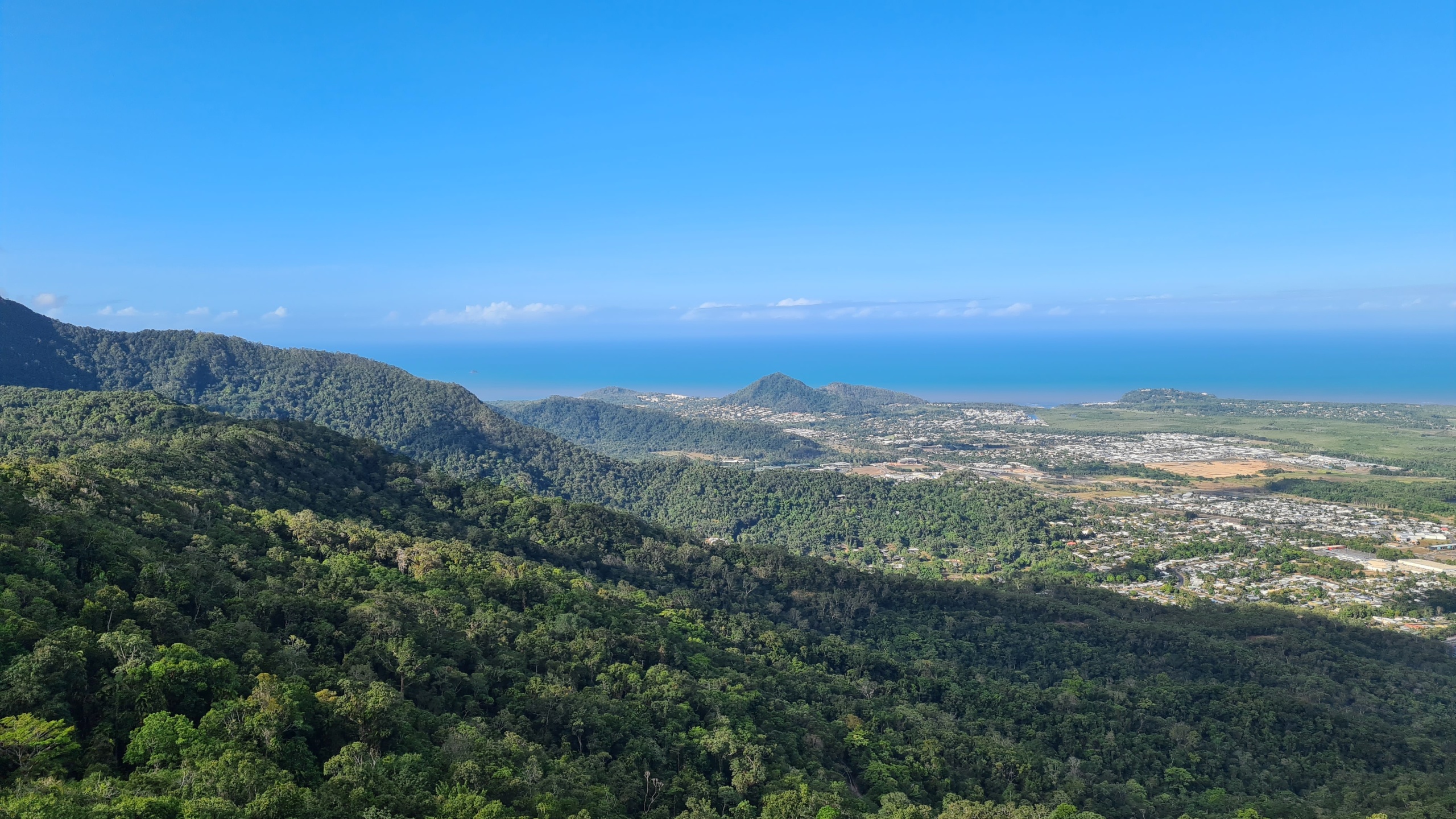 Urgent calls for politicians to address housing crisis in Far North Queensland. Photo of Cairns by Nico Smit on Unsplash

Housing, a critical determinant of health – on the election agenda in Far North Queensland

A forum this week with federal candidates for Leichhardt from the Australian Labor Party, the Greens and the Socialist Alliance put a spotlight on the housing crisis in Far North Queensland (FNQ).

The First Nations Housing Forum was co-hosted by Change the Record coalition and Everybody’s Home.

CEO of National Shelter and co-chair of the forum, Emma Greenhalgh, told attendees that demand for housing in FNQ outstrips the supply and it has become substantially worse since the pandemic.

Overcrowding and sky-rocketing living costs were identified as other issues influencing the housing crisis in FNQ.

The Liberal National Party has held power in Leichhardt since 2010 with Warren Entsch as the representative. He is running for the seat again in this year’s election after announcing in 2019 that he would not stand again.

One-third of all Australians rented their place of residence in 2016; in Leichhardt electorate, 43 percent rented, indicating a high demand for rental properties.

In a joint statement, Change the Record and Everybody’s Home have called on “all parties and candidates to commit to invest in more affordable, social housing and Aboriginal Controlled Community Housing to address the housing crisis” this Federal election.

“The lack of new investment in remote Indigenous housing is a national scandal. The overcrowding crisis facing First Nations Peoples is not an accident, it is the direct consequence of Government policy. With renewed investment we can make a profound improvement and give more First Nations Australians the secure, safe housing we all deserve,” said Kate Colvin, national spokesperson for Everybody’s Home.

Co-chair of Change the Record Cheryl Axleby told forum attendees that providing adequate housing, especially for Aboriginal and Torres Strait Island peoples, should be a key part of Government policies.

It is a “critical issue, and it is the total responsibility of all levels of government but particularly Federal”, she said.

O’Shane emphasised that no more reports or reviews are required – “we know what is needed and we’ve known for decades”.

Phillip Musumeci said the Greens position on housing centred on their proposal for a Federal Housing Trust that would encompass different levels of housing, targeting women and children, First Nations people and others who have trouble accessing homes.

The Greens policy to increase welfare payments above the poverty line should go some way to address the second issue, Musumeci told attendees.

Musumeci commented on the impacts of substandard housing on children’s schooling and health.

Labor candidate Elida Faith told attendees that safe and appropriate housing is a fundamental requirement and “it is not fair that Far North Queensland First Nations people live in some of the worst housing conditions in the world”.

Faith outlined the ALP’s Australian Housing Future Fund policy, of which $200 million is ear-marked for maintenance and repairs of housing in remote Aboriginal and Torres Strait Island communities, including FNQ.

Cost-of-living is one of the main issues for people, Faith said – “there is no silver bullet – we need a government that has a real plan to tackle the cost of living, and the current Government does not.”

Writing in the forum chat function, an attendee questioned Labor’s commitment to tackling the cost-of-living because of the announcement that they do not intend to increase the JobSeeker payment.

Axleby asked the candidates what initiatives they had to reduce racism in accessing housing and rental properties, which is a significant problem.

Musumeci answered that the Greens’ First Nations policy addresses racism overall but nothing specifically outlined to address racism in housing. A Voice in Parliament is crucial, he said.

O’Shane said she does not believe in private property and that rental properties should be provided by the federal government, as they do for Australian Defence Force housing.

Faith responded that the ALP would consult with organisations and relevant stakeholders about the issue. The ALP fully supports the Uluru Statement from the Heart.

In closing the forum, Greenhalgh acknowledged the very strong comments and feelings in the chat function regarding self-determination.

LNP candidate Warren Entsch was invited to attend but declined.

The website, They Vote For You, which was built by the OpenAustralia Foundation, shows how he has voted on various issues: https://theyvoteforyou.org.au/people/representatives/leichhardt/warren_entsch

He has almost always voted for decreasing availability of welfare payments.

Follow Change the Records live tweets from the forum here. 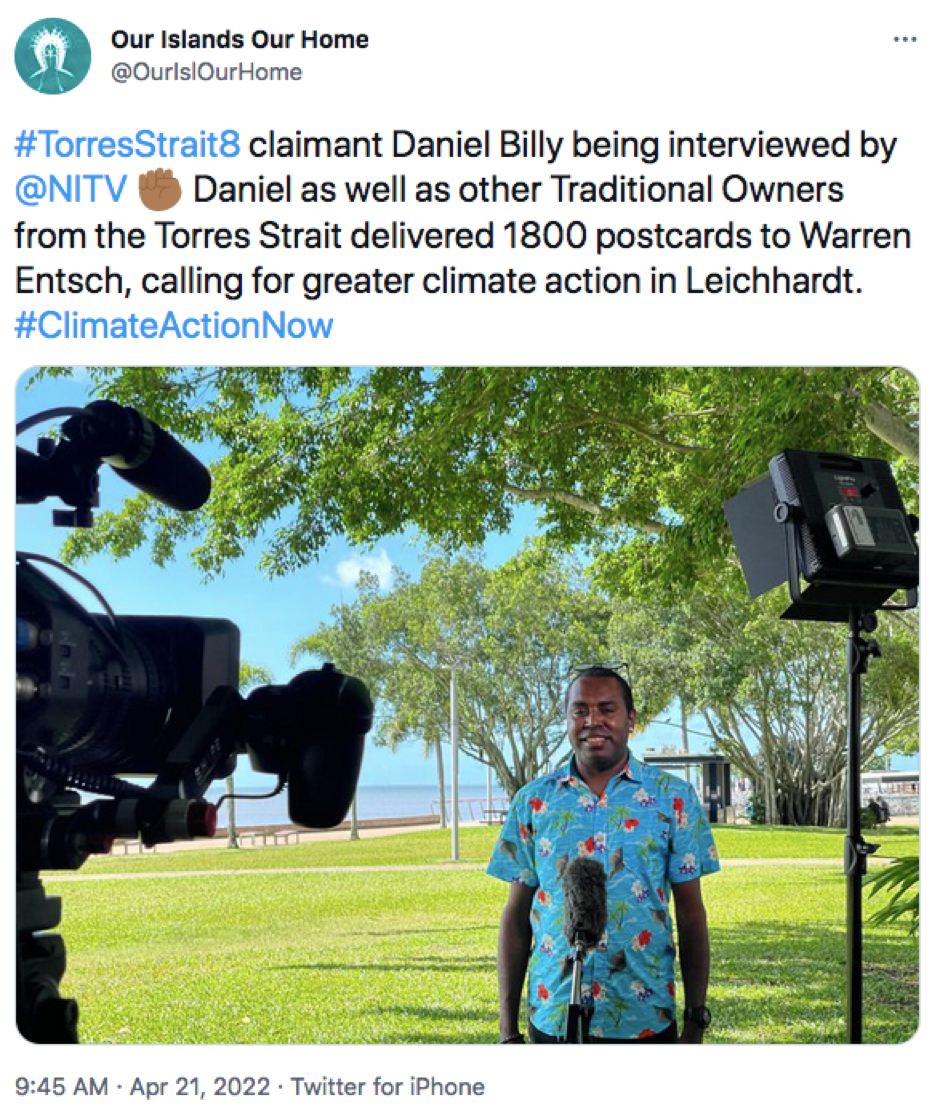 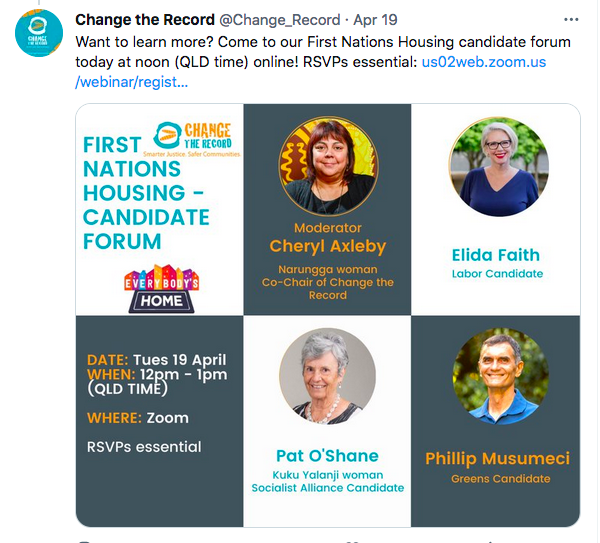 See Croakey’s archive of stories on the social determinants of health.