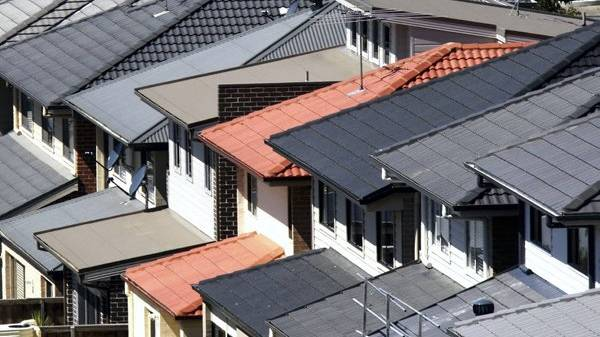 Housing is a critical health issue

Housing affordability – is it really just about economics and supply?

Introduction by Croakey: Rarely do governments look at housing through a health lens, even though it is an important social determinant of health.

All we tend to hear is about hot property markets pricing out young people from home ownership – instead of the social and health benefits of adequate and affordable housing.

Even the acclaimed Four Corners program in its “property frenzy” episode on Monday made no link between housing and health, despite acknowledging that “housing has become the great divide between the young and the old, the well-off and the less so”.

In the analysis below Sienna Crabbmor, a final year public health student at Monash University, looks at the Federal Government’s inquiry into housing affordability and argues for a new evaluation that takes into account the health and social impacts.

The Australian Parliament is currently holding an inquiry into housing affordability and supply, but are they asking the right questions?

Housing affordability is clearly an important issue in Australia, with housing costs increasing at a greater rate than wages. However, the narrow focus of the inquiry’s terms of reference limits its capacity to address many important health and social concerns associated with housing. 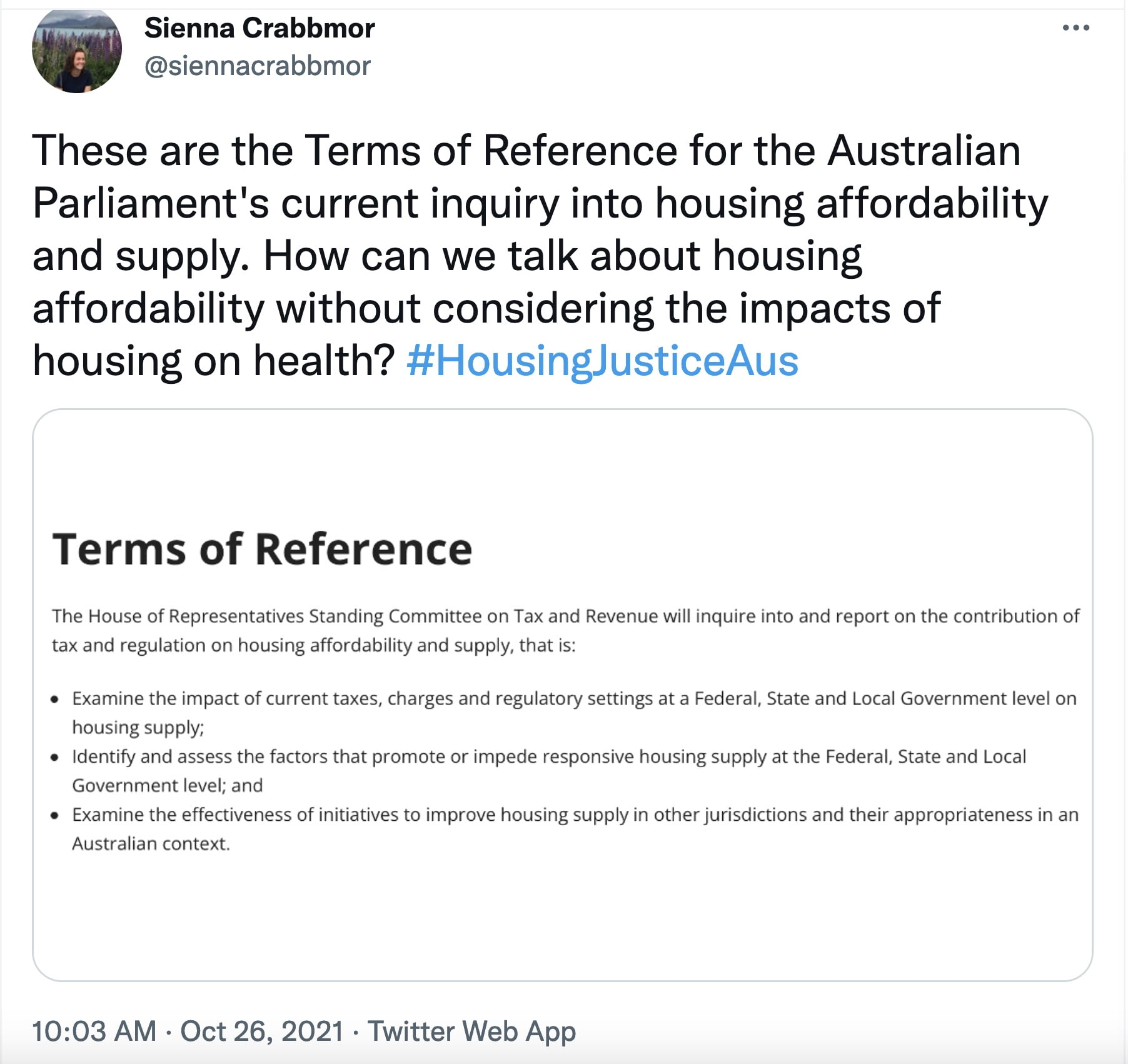 Looking at housing affordability though a health lens can create a more detailed picture and help us to better identify both the scale and extent of the problems, as well as an integrated, systems approach to developing solutions.

Even if the Federal Government wants to use financial measures, seeing housing as a health issue can have benefits by saving costs in other areas. For example, access to safe and healthy homes can reduce health costs and keep people out of prison.

Using a health lens, we can also see that there are other benefits to quality housing, including social benefits that we cannot put a price on. For example, with lower levels of housing stress, there are greater opportunities for personal growth and development. This might allow someone to gain further education or find employment, and then participate more productively in society.

The link between housing and health

There’s a whole range of ways that housing is related to health but some of the key connections I’ve been researching include incarceration, public housing and the COVID-19 pandemic.

This is a particular concern for Aboriginal and Torres Strait Islander people, as documented in Croakey’s #JustJustice series.

Recommendations have been made by the Australian Housing and Urban Research Institute (AHURI) to build more public housing in Australia to support people who leave prison and to reduce imprisonment rates. This would have broader social and economic benefits for the entire population. 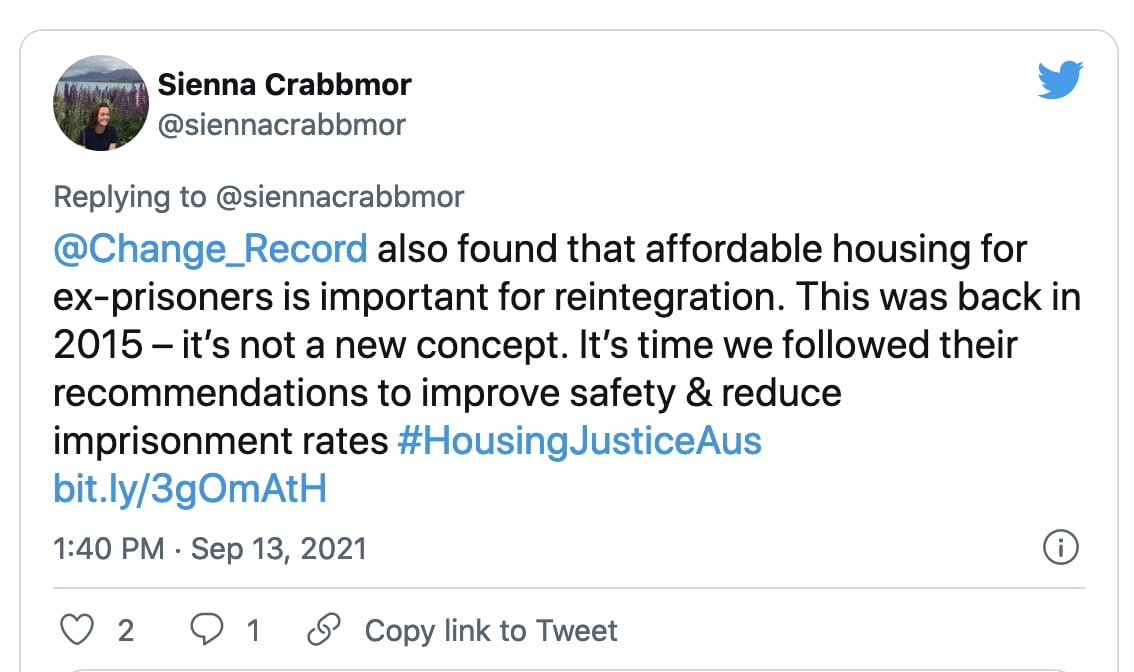 Building quality public housing can also have positive outcomes on other health issues. For example, the lack of housing supply often means that women who experience domestic and family violence have nowhere to go if they leave an abusive partner. 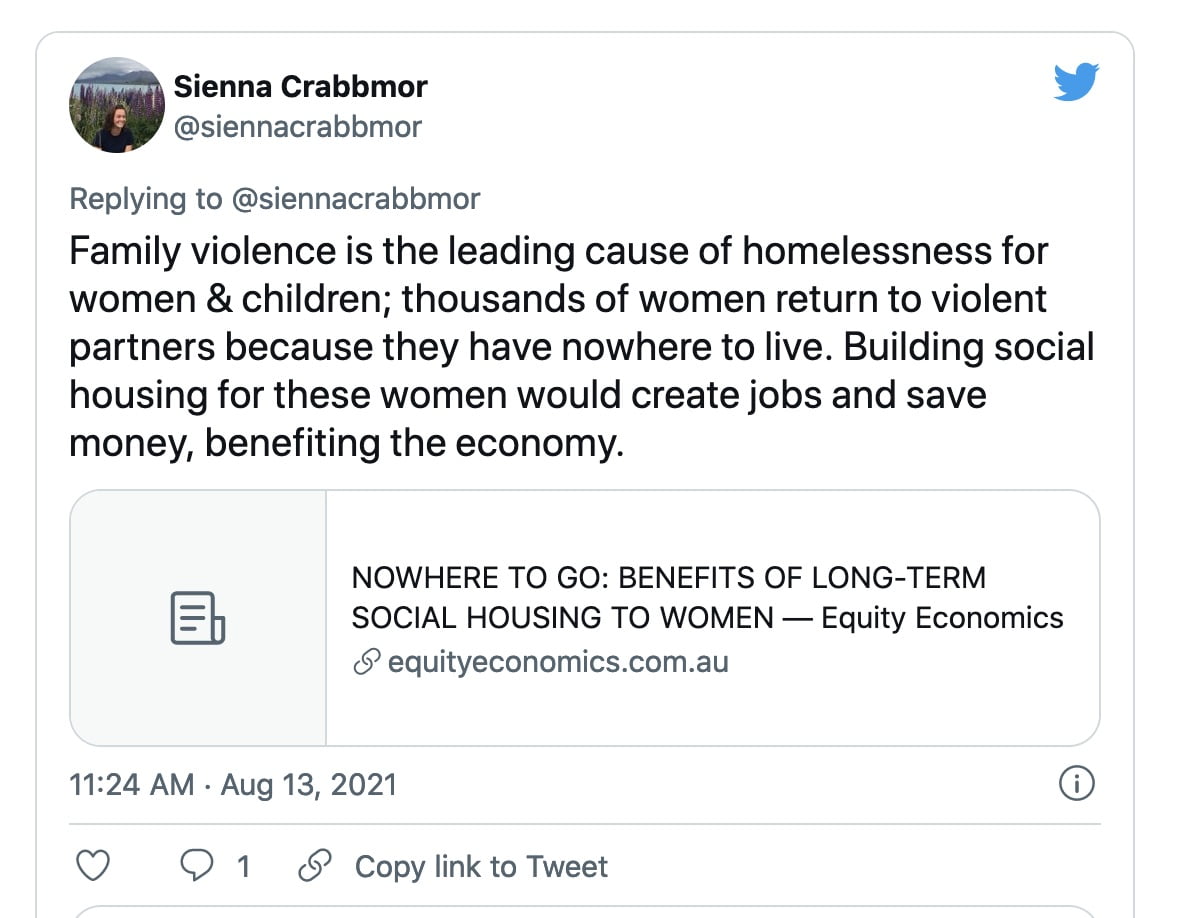 This has been especially important during the COVID-19 pandemic as crisis accommodation in some areas was filled with people with COVID.

Another concern is that lockdowns increased the rates and severity of family violence, with people spending more time in their homes. 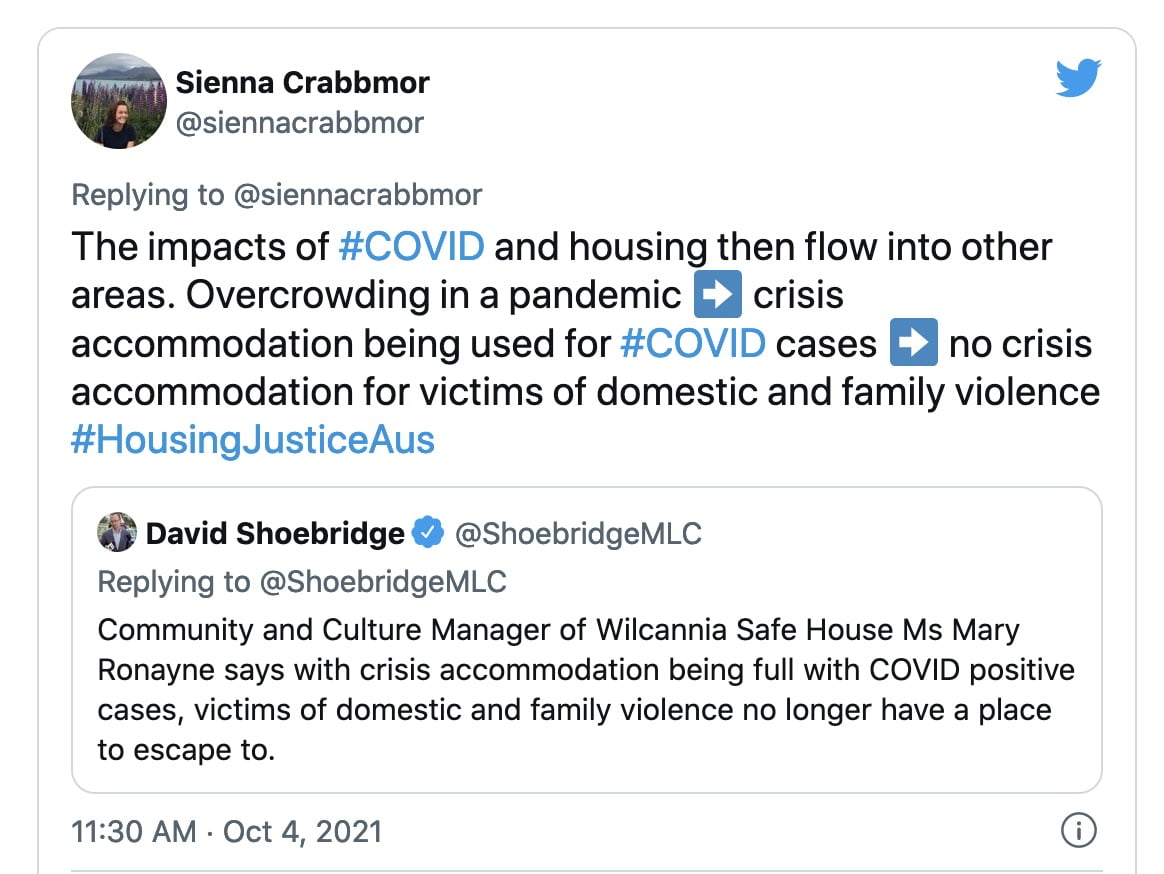 There are very direct relationships between housing and COVID-19 as well as these indirect connections.

Importantly, overcrowding has been linked to rising COVID-19 case numbers across the country. In Wilcannia in north-western NSW, locals had been calling for more housing to address overcrowding for years before the pandemic but none of their requests were delivered in time.

The consequences of this have been enormous for local Aboriginal people and it again shows the broader health impacts of housing. 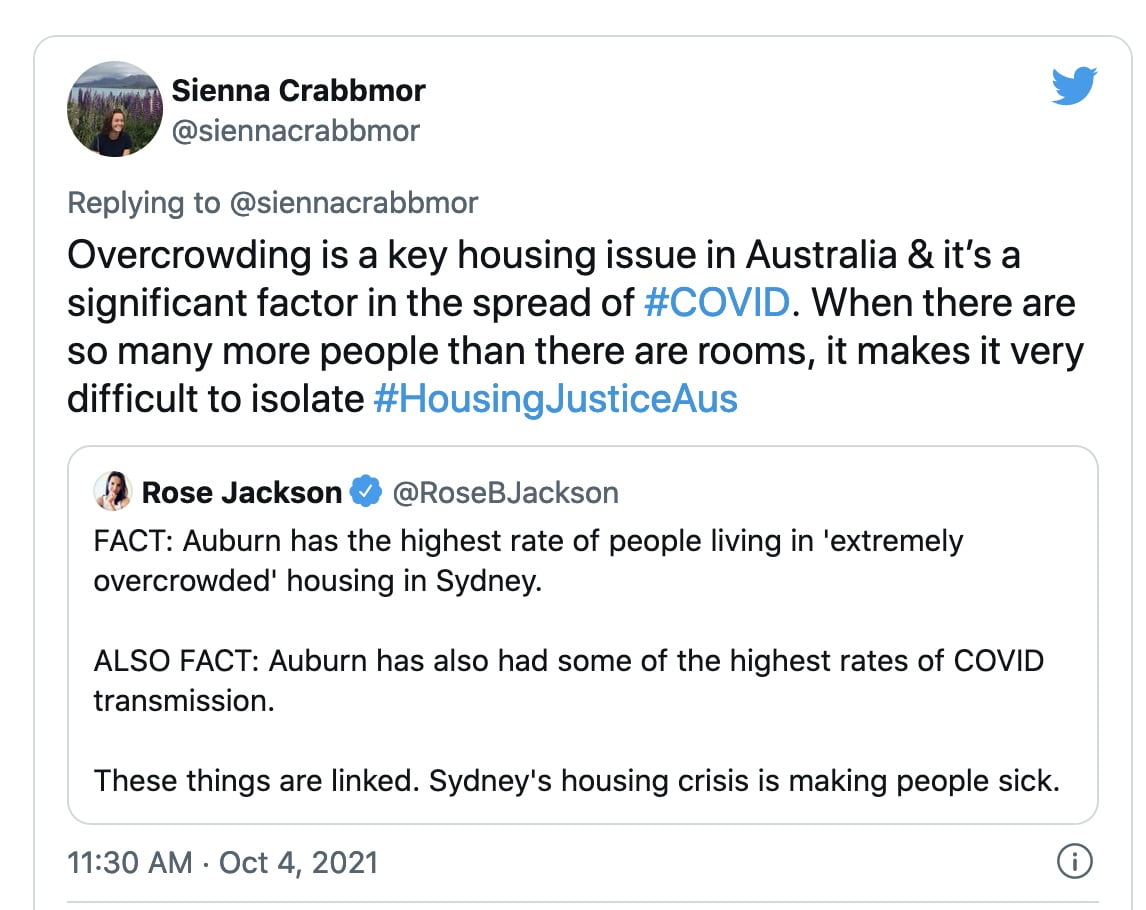 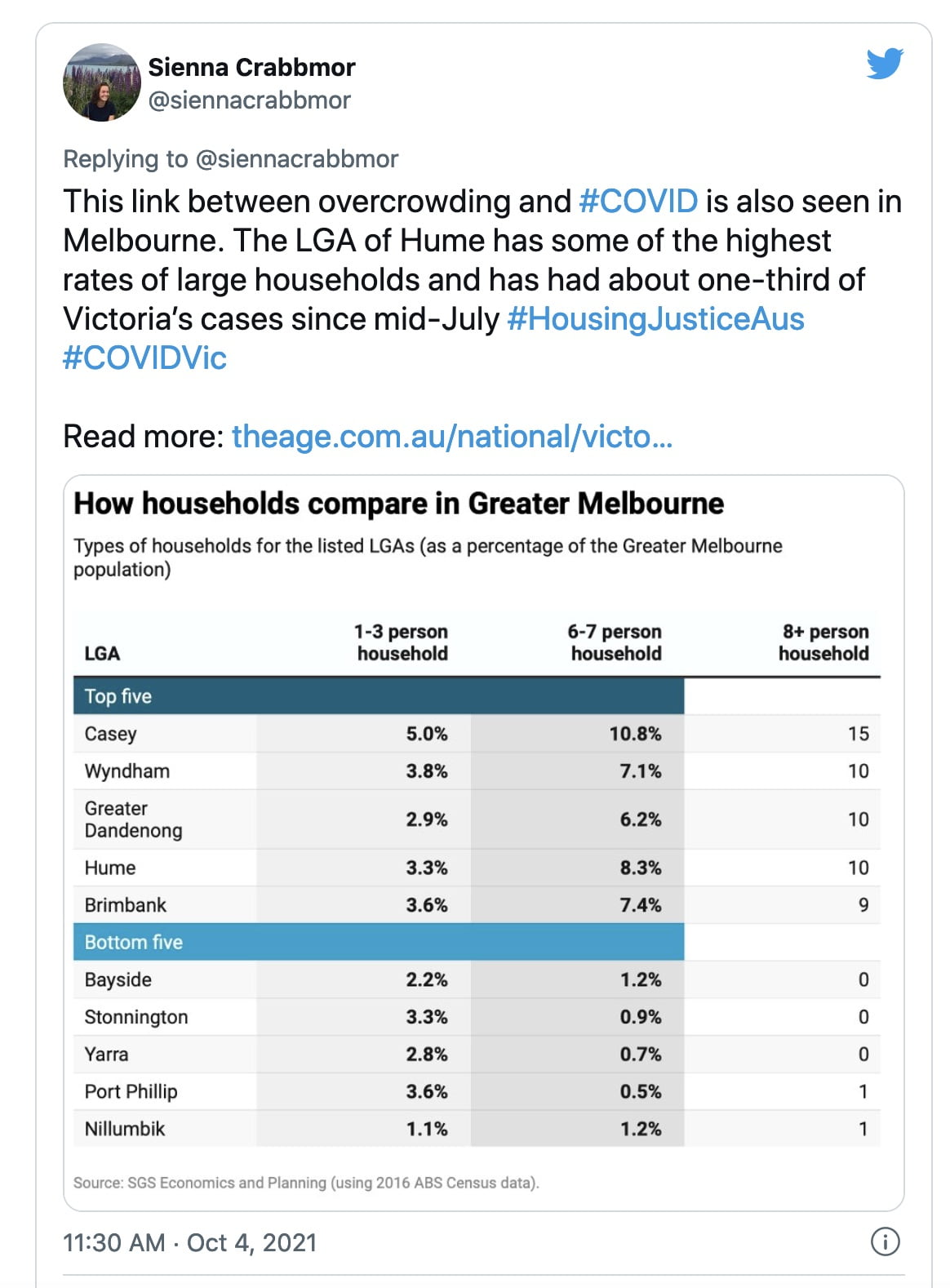 What about climate change?

It is critical to consider our changing climate when talking about housing affordability. Climate change is already affecting the health and wellbeing of many Australians, with poor quality housing in remote communities exacerbating the impact of extreme heat.

As a greater portion of Australia is exposed to extreme weather, home insurance prices will increase. In some areas, premiums are expected to increase so much that homes will be virtually uninsurable. This includes areas prone to flooding, fires and coastal inundation – and our cities are not immune. 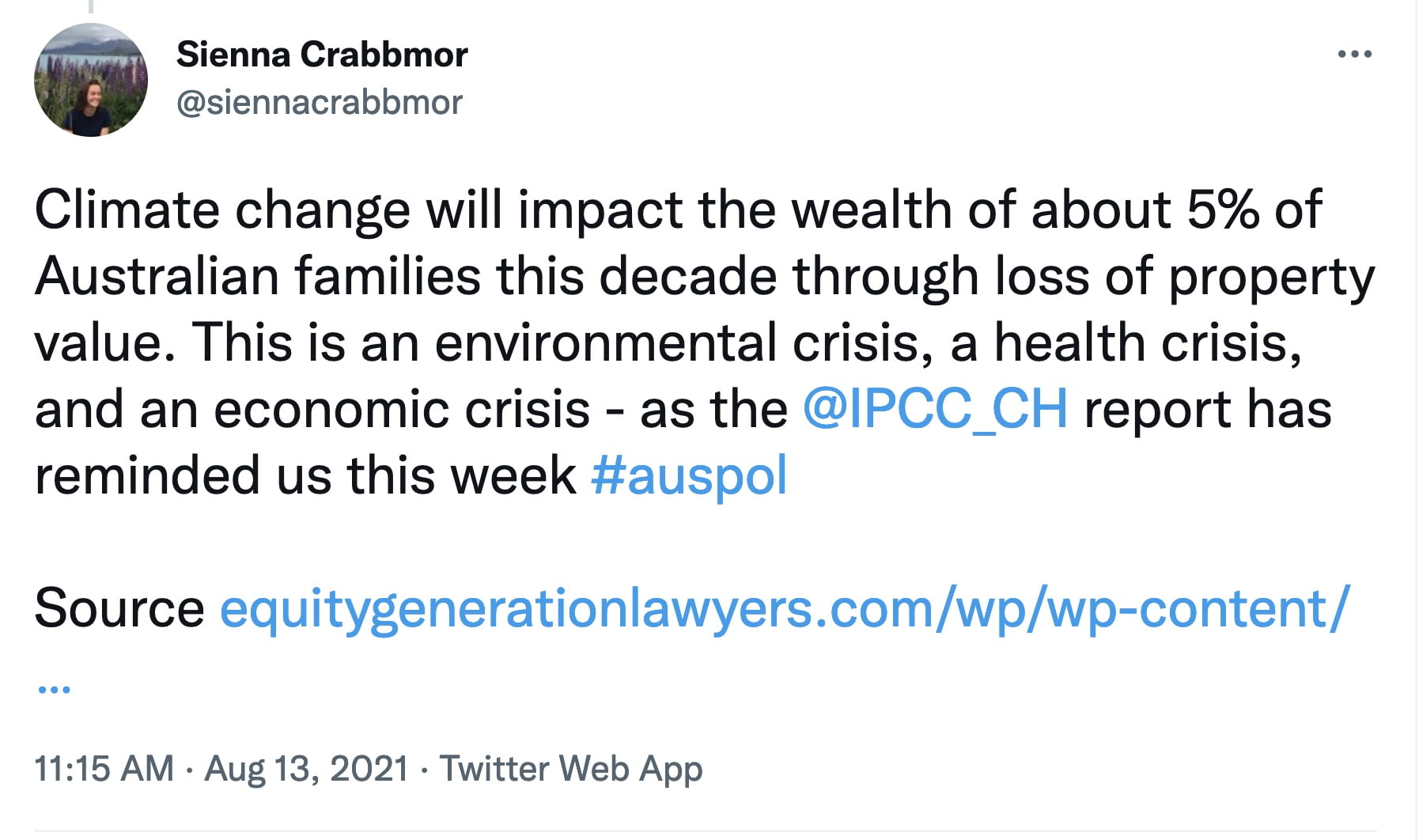 What is the Federal Government doing about this? So far, not enough. Last week the Government committed to a net zero CO2 emissions target by 2050, however we are yet to fully understand the nature and cost of this deal between the Liberal and National parties.

It’s also just a target so far, with no real plan or legislation to make it happen. Prime Minister Scott Morrison has said the Government intends to use existing and emerging technologies to achieve net zero. What this says to me is that the Government still thinks climate change is an issue of the future; we will develop technologies to help us and until then we can wait.

The Coalition’s hesitation on this issue was clearly a matter of contention within their parties. The Liberal New South Wales Government has already committed to the goal of net zero emissions by 2050, with a 35% cut in emissions by 2030. In supporting a net zero emissions target by 2050, Federal Treasurer Josh Frydenberg noted that financial markets and businesses were already preparing for a new future.

Despite the Government accepting a net zero target, it’s too little too late, as argued by Lesley Hughes and Will Steffen in The Conversation. They suggest that globally we need to achieve net zero by 2026 to keep warming below 1.5 degrees, or 2040 to keep warming below 2 degrees. Setting this target may be a good starting point but the Government needs to urgently set a more ambitious target and make a solid plan to get there.

What needs to happen next?

Housing is a key environmental and social determinant of health, and this factor should always be considered when discussing housing.

The Government is missing a wide range of important impacts that housing affordability has on society and the economy by omitting a health lens. Investing in quality, appropriate, and safe housing can have long-term benefits by reducing costs in areas such as healthcare and prisons.

So, what should the Government do beyond this inquiry? It needs to go into communities across the country and talk to people about what they want, and what their concerns are regarding their housing needs.

And it needs to develop an approach to housing affordability that centres on the needs of people and communities, especially priority groups.

Addressing housing as a health issue will bring wide-ranging benefits for everyone.

Sienna Crabbmor is a final year public health student at Monash University who is currently on placement at Croakey. See her previous article, ‘On health, housing, and flourishing futures – tweeting upstream’.

See Croakey’s extensive archives on the social determinants of health.

PrevPreviousNew Board announced for Croakey Health Media
NextReflecting upon difficult times, an impossible situation and next steps: Professor Fran BaumNext