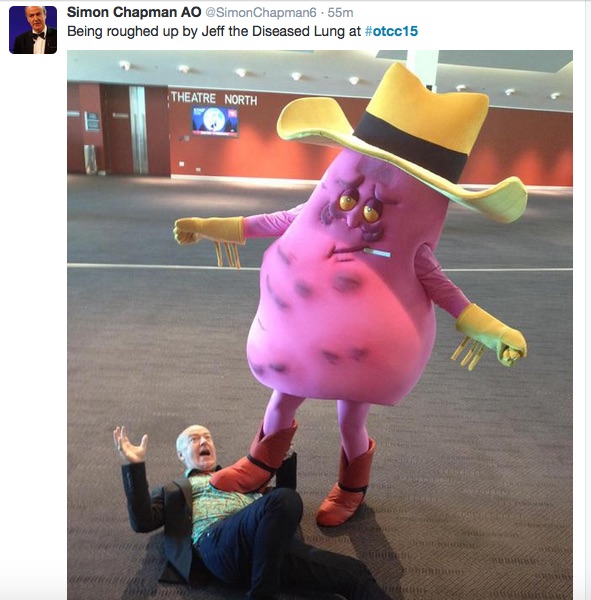 How Australia could help save millions of lives: export tobacco control

Already staring down the barrel at the threat of climate change, many of our near neighbours are also on the frontline now of tobacco-related diseases and deaths, with a prevalence of smoking that signals grim death and illness tolls in coming decades.

Slevin said ahead of the conference that it’s easy to be a bit complacent in Australia now about smoking, particularly if you are white and middle class.

That wasn’t possible after the first day of the three-day conference, which sounded alarm bells about high rates of smoking in many countries, including the South Pacific, and outlined a worse than previously expected prognosis for Australians who continue to smoke.

One billion deaths in the 21st century?

Professor Alan Lopez said the toll of tobacco related deaths will likely rise from 100 million over the past century to a billion in the 21st century if bold global action is not taken to address peaking impacts of high smoking levels in many developing nations.

His keynote on ‘why tobacco control matters: global and regional perspectives’ opened the conference with two key messages.

One, he said, is for individuals, to say that “smoking is about the dumbest thing you can do if you want to stay alive”, with the risk of an Australian smoker dying prematurely now three times that of a non-smoker.

“You have a three times higher chance of dying at any age at any time if you are a current smoker compared with a lifelong non-smoker, in other words tobacco will kill two out of every three of its own users, either in middle age or old age.”

“The risks for individuals are extraordinary,” he said.

His other message was to governments about what tobacco does to their populations, with tobacco responsible for two out of three premature deaths.

This toll peaked in Australia and other developed nations in the 1980s, ahead of dramatic reductions in smoking. Then one in three Australian men who died in middle age was killed by tobacco, he said. That is now down to one in five.

But other regions are now heading for such high death rates, including the South Pacific, where in many countries half the male population smokes. “If they continue to smoke they will also begin to die in large numbers, like they did here,” he said. 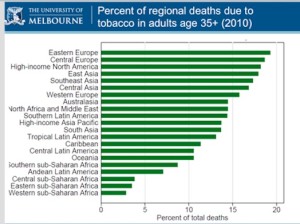 Currently, he said, between 7 and 17 per cent of male deaths in the region are due to tobacco, and up to 10 per cent of female deaths. They contribute to an annual global tobacco related death toll that is estimated at more than 6 million a year, but expected to reach 10 million by the 2050s.

“Where’s this going? I just don’t know, but it’s not going down,” he said. “It’s expected to get much worse – there’s nothing special about hearts and lungs in this region.”

Lopez is the Director of the Global Burden of Disease Group in the Melbourne School of Population and Global Health. He worked at the World Health Organisation in Geneva for 22 years, including as chief epidemiologist in its tobacco control program.

A concern is that the pace of reduction in prevalence – greatest between 1996 and 2006 – has now slowed for men. “That ought to sound alarm bells,” he said.

Lopez warned that exact figures were not yet available for many cases and countries, but he said smoking is believed to be the leading cause of disease burden in Papua New Guinea, ahead of malnutrition, while in Samoa, an estimated one in seven male deaths are due to tobacco.

In Tonga one in 10 female deaths is attributable to tobacco. In Indonesia, where 60 per cent of men currently smoke daily, mortality from smoking “is about to become massive,” he said.

Such trends should, Lopez said, set a challenge for Australia’s regional aid program to go beyond traditional development support to assisting South Pacific nations to build their governance systems.

“More effective prevention is urgently needed. Bold public policy can prevent the one in three deaths in middle age that are about to occur in the region in our lifetime unless we are successful in reducing tobacco consumption.”

“We don’t need to smoke. It is the single greatest public epidemic of the 20th century and will be in the 21st century. It killed 100 million people last century, it will kill a billion people this century unless we do something about it.” 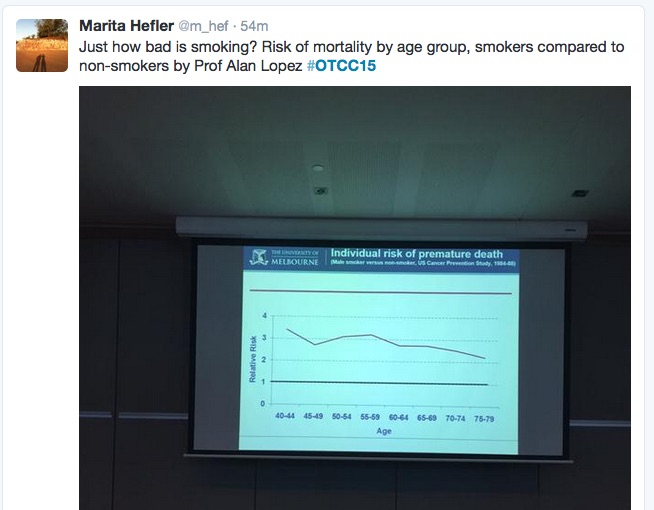 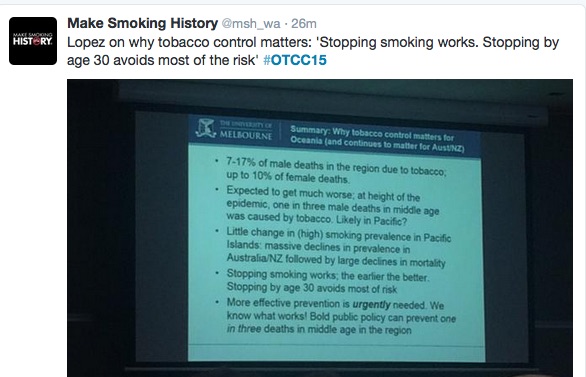 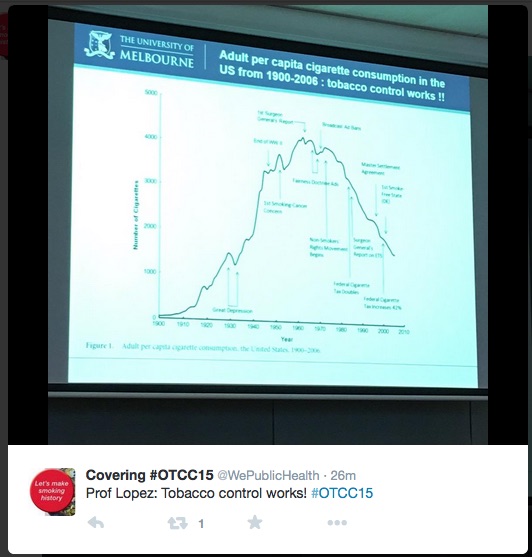 Your odds of dying from smoking now? ‘House wins’ 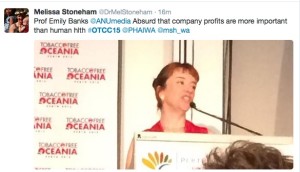 Professor Emily Banks understands the reaction from some people to news of her study into the relationship between smoking and premature death in Australia. “It says it on the packet!” is the obvious response.

But she said there was “a lot of policy need, in fact I would say policy hunger” for data specifically about the Australian experience. Previous Australian estimates had been modelled from US and UK studies.

Banks is Scientific Director of the Sax Institute’s 45 and Up Study, which conducted a four-year analysis of health outcomes from more than 200,000 people in New South Wales. She described its findings, at its February release, as “a huge wakeup call”.

The first large-scale, direct evidence on smoking and mortality in Australia, it showed that up to 1.8 million of the country’s 2.7 million smokers will die from their habit if they continue to smoke.

“Australia has been a world leader in tobacco control for decades and in many ways it’s one of our greatest exports, but we’ve not had direct evidence re effect of smoking on death rates until it was published this year,” Banks told Croakey.

It also found that smoking just 10 cigarettes a day still doubles the risk of dying prematurely. “They think of themselves as light smokers, but that risk is equivalent to being severely obese or of drinking a bottle of vodka a day…”

All up, it made for an alarming risk profile, as she illustrated with this slide: 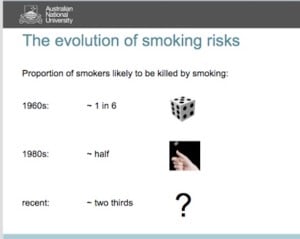 Banks explained that when smoking was first introduced, most people started smoking later in life and didn’t smoke that heavily, so in the 1960s about one in six smokers were likely to be killed by smoking. By the mid 1980s it had risen to about half.

But now, with most smokers having started in their teens and smoking relatively heavily for a long time, we see “the true realization of the risks of smoking”.

She said: “It’s as if during the 60s, it was like throwing the dice: in the 80s it was like tossing a coin. And now, you could argue the odds are against you. ‘House wins’.”

“What this says now is you’re unlikely to get away with (smoking) but it also highlights the benefits of quitting: if one person stops smoking, you’ve basically saved a life.”

But Banks says not all the news was grim, given dramatic reductions in Australian smoking rates over recent decades were now being felt in the community.

In fact, she wants to see Australians as impressed by the health gains generated by tobacco controls as they are by our nation’s sporting achievements – to the point that they are pub discussions just as much as our Ashes cricket travails. And that’s not just because they’re substantial but also because they guard against misleading misinformation about whether health interventions work.

“We’re actually winning, we’re world champions in terms of our overall death rates but no one knows about it. They also don’t know we’ve had an 80 per cent drop in cardiovascular disease death rates since 1968,” she said.

“If you knew we’d won the Ashes every year since 1968, and someone came along and said the coach isn’t up to much, or the fielding could be better, and the batting was terrible, you wouldn’t believe that if you knew the background success.”

It’s also time to take that prowess on tour, she said, joining Lopez’s call for Australia to promote tobacco control within the region.

“Effective tobacco control should be one of our great exports,” she said. 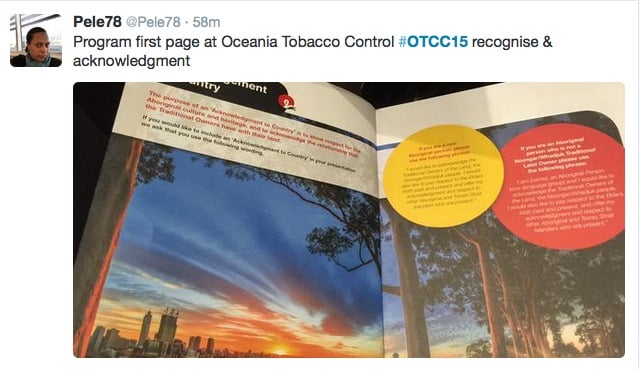 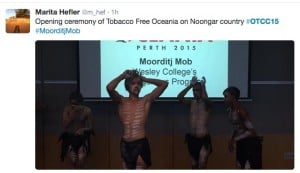 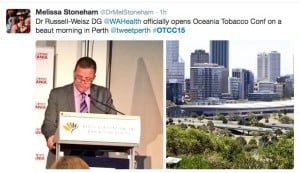 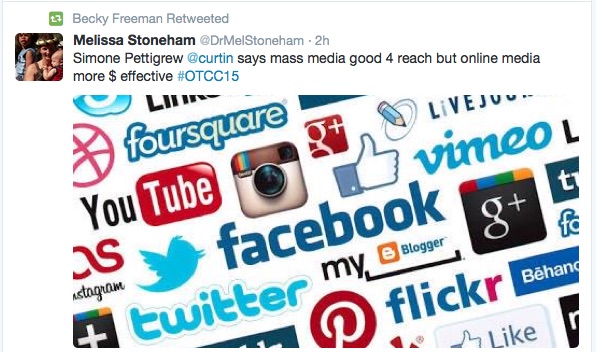 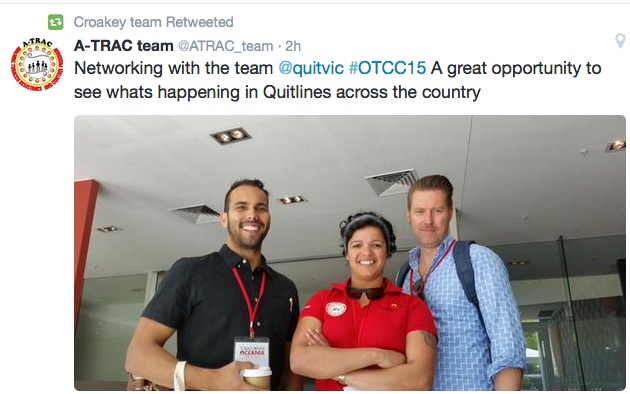 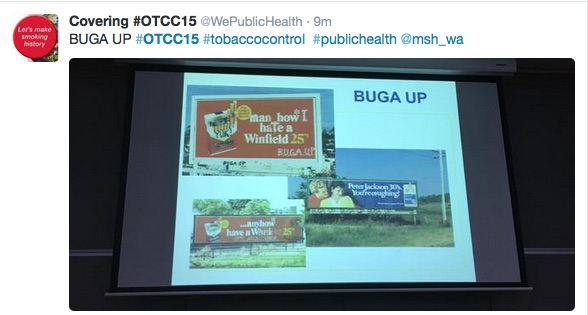 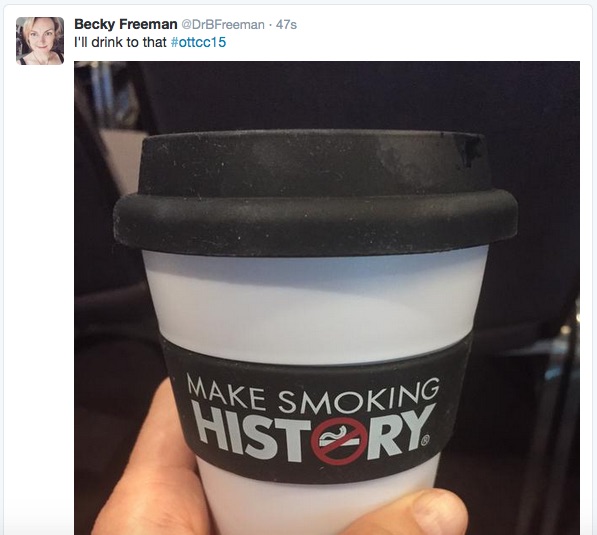 The conference hashtag was trending nationally yesterday, with more than 4 million Twitter impressions over the past few days – thanks in particular to those tag-teaming this week for @WePublicHealth. 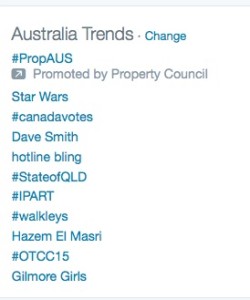 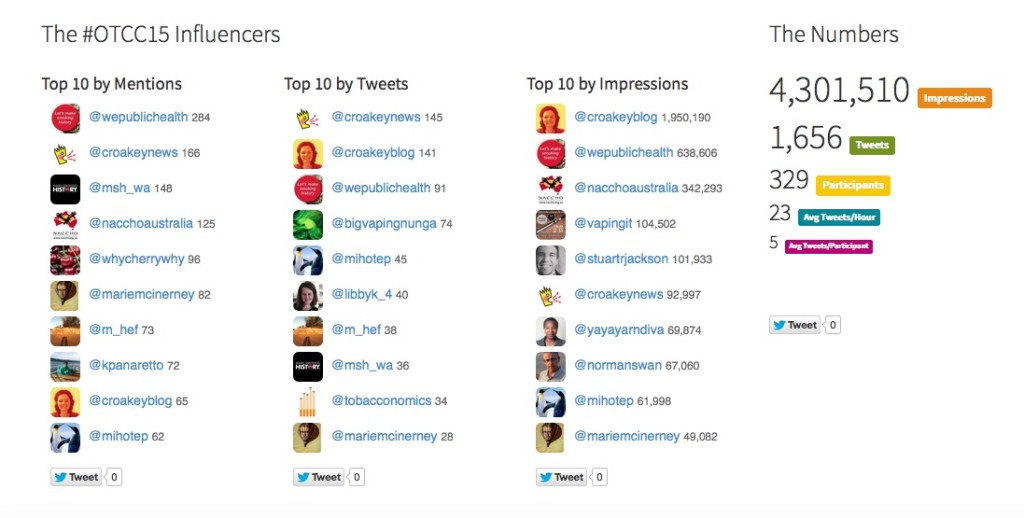 Jeff the Diseased Lung provided many opportunities for selfies… 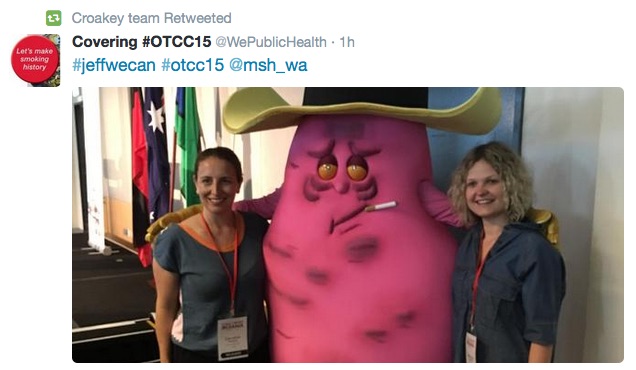 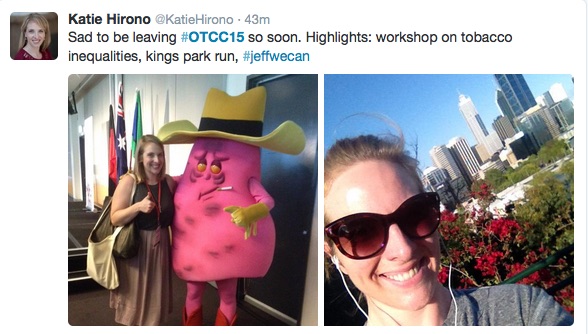 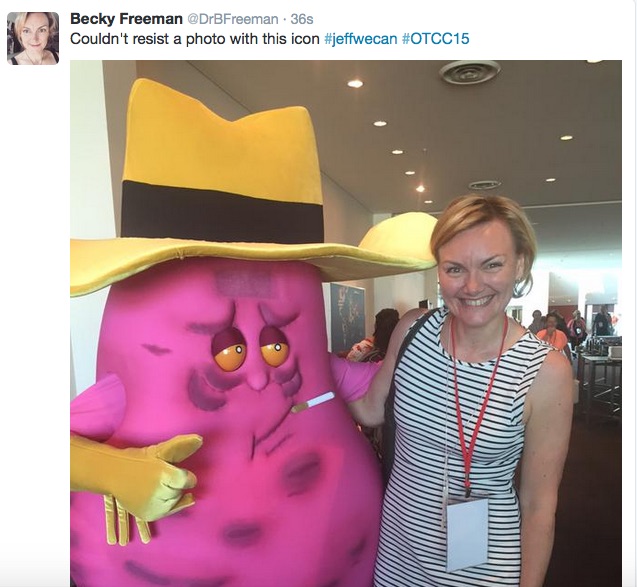 … Though her entry makes most sense if you know that the floored Professor Simon Chapman is fond of singing the song below.

PrevPreviousTackling tobacco as a social justice issue: stories of success from the community
NextAfter the Deluge – some reflections on more than twenty years of disaster managementNext