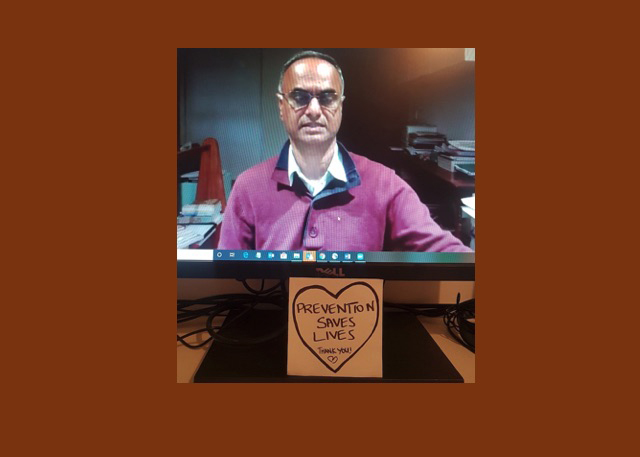 How can health promotion contribute more to climate action?

Introduction by Croakey: Many people in the health sector are keenly awaiting the release of a landmark investigation into climate change and health in Western Australia, as recently previewed at Croakey (the report’s release was expected this month but has been delayed).

While systems change and policy development are critical, it is also important that health promotion and public health professionals engage with communities and ground-up approaches in responding to climate change, says Professor Tarun Weeramanthri, who led the inquiry. He is an independent public health consultant and a previous Chief Health Officer in WA.

“That capital can be used to provide a space for climate change champions to act. So, if you are more senior, can you invite someone else to take the lead as a change agent, and ‘cover their back’ whilst they do so?” he says.

Below is the text of the Ray James Memorial Lecture, delivered by Weeramanthri earlier this year to the WA branch of the Australian Health Promotion Association (AHPA), giving an overview of the forthcoming report.

The lecture honours the late Ray James, a health promotion practitioner who worked in the USA, India, New Zealand, Latin America, WA and NSW, who was known for innovation, willingness to risk trialing new approaches, mentoring early-career professionals and helping others beyond the call of duty.

I’d like to begin by acknowledging the Wadjuk people of the Nyoongar Nation, the traditional owners of the land on which I am today, and pay my respects to their elders – past, present and emerging.

I only met Ray James once, but my abiding memory is of the legacy he left in the people he had mentored, and the fact that he was in equal parts respected, admired and loved.

It is an honour to give his named oration tonight, and it is his focus on community-based health promotion that is especially relevant for this talk on Climate Change, and the role of health promotion over the coming decade here in WA.

I want to first examine the illusory and harmful distinction between the notion of the centre and the periphery. Australia has suffered from it plenty in its history since colonisation, looking to Britain as the centre of the Empire, and seeing ourselves as living in a distant peripheral colony, unable to see and appreciate the landscape and the lives in front of us. The implications of that Euro-centric lens are written into our history and our present, firstly and fundamentally for Aboriginal people, and secondly for all other Australians.

COVID-19 has affected everyone in every country of the world, but we have all experienced it in our own homes, our own communities, our own settings. The same could be said for climate change.

So, surely, wherever we live is ‘the centre’, whether that is in Port Hedland or Perth. All life, all health promotion starts with the local.

As all novelists know, what counts is the TRUTH of the picture that you portray as health promotion practitioners. The more truthful, the more universal.

Which brings me to the Climate Health WA Inquiry – what is essential is that it is place-based.

Lots has been written about climate change in general and climate-health links in particular, but mostly at a global or national level. If we have succeeded in painting a true and truly regional picture of Western Australia, this Inquiry will then have broader significance (see https://www.mja.com.au/journal/2020/212/8/climate-health-inquiry-where-sustainability-public-health-law-and-climate-action).

The final report was completed on 20th April, and will be released after due consideration by the Minister for Health. It contains ten findings and ten recommendations, but in this talk I will focus on the narrative structure of the report.

There are ten chapters in total. The first five cover the challenges faced by the WA health sector with respect to climate change, and the last five chapters cover the recommended response.

It is a report that is written to be read, and engaged with.

There are two critical distinctions that need to be made. The first is Climate vs Weather (see Box 1).

The second is Mitigation vs Adaptation (see Box 2)

Two of the first five chapters are titled Climate Now and Climate Here. The purpose is to bring the climate science, and the climate-health links, into the ‘Now’ of 2020 and the ‘Here’ of Western Australia.

From the vantage point of 2020, we can look back and see that expert climate science predictions have been amply borne out by real-world data, and justify much greater action, including from the health sector, over the coming decade.This first half of the report also draws on material presented to the Inquiry to identify a series of vulnerable groups in WA, both established and emerging, as well as resilience factors.

The second part of the report highlights drivers of change (including evidence, data, research, risks, costs and benefits), key structural gaps (focused on mitigation), and specific ways to improve adaptation. As practitioners, you will recognize many report headings that are common to health promotion frameworks (policy, education, awareness, partnerships etc.).

You can certainly pick out the sections in the chapters that interest you the most, whether on mental health, health impact assessments, and read them in detail. Then ask yourself: What do I agree with, but also what is missing from this picture of Western Australia?

Look at the multiple footnotes – they are not all references to the academic literature, but also include submissions, hearings, news articles etc. It is as granular as we could make it. It has as many Western Australian voices and examples as we could find.

Reading the report may stimulate you to look at the breadth of formal hearings, all of which are available as audios and transcripts on the Inquiry website.

I draw your attention to the hearings from civil society organisations outside the health and environment sectors, such as Red Cross Australia, Uniting Church, Commissioner for Children and Young People, People with Disabilities and WA Council of Social Services, all of whom could see the relevance of this Inquiry to their work.

All written submissions are also on the website. Indeed the Australian Health Promotion Association (WA Branch) provided a comprehensive submission, in which they made a number of recommendations under the six headings of Leadership and Governance, Research and Data, Health-Promoting and Emissions-Reducing Policies, Emergency and Disaster Preparedness, Supporting Healthy and Resilient Communities, and Education and Capacity Building for a Sustainable and Climate-resilient Health Sector.

In this submission, they also referred the Inquiry to two issues of the Health Promotion Journal of Australia focused on climate change and health, a special issue in 2011 (see https://www.publish.csiro.au/he/issue/6786) and a virtual issue in 2016 following the 2015 Paris Agreement (see https://www.publish.csiro.au/he/virtualissue/1502). Most of the issues and points made in previous years remain valid and unaddressed today.

So how can health promotion contribute more to climate action?

For me, the answer is not in more big picture policy to be honest, but in addressing the gap between those words and professional and personal actions.

It is well and good to declare a climate emergency, or call for mandatory targets, but as Nicholas Talley, editor-in-chief of The Medical Journal of Australia, has recently written, health professionals need to put ‘our own house in order’ and lead by example (see ).

How will you use your position and networks, as an individual, community member and professional? What specific responsibilities, experiences and opportunities – in any of those spheres – do you have that no-one else has? This will help you define your unique contribution within a broader approach.

It is often the community-based actions and partnerships that are missing from the big picture of systems change. We need your descriptions of the hard yards of local action, to either reduce emissions and waste, or strengthen adaptation. These detailed descriptions can then be built back up into policy and theory. Such a ground-up approach is needed at the same time as peer learning and more top-down approaches.

You don’t have to be an expert on climate or sustainability, but there will be someone you live or work with who can help you. Climate change does not have to be your passion, but can you find someone who can lead, or support an organization that is at the forefront of climate action in the health sector (for example, the Climate and Health Alliance or the Global Green and Healthy Hospitals Initiative)?

I have been asked for a list of ‘low hanging fruit’. There will be plenty of ideas for change in the Climate Health WA Inquiry final report, or you can look at one or more of the individual submissions, or organisational websites. So pick one piece of fruit, your favourite and closest to you, and eat it!

A particularly powerful alliance is between professionals at different stages in their careers. Many climate change champions are younger, and would really benefit from support from more senior practitioners, who have built up reputational capital in an organization.

That capital can be used to provide a space for climate change champions to act. So, if you are more senior, can you invite someone else to take the lead as a change agent, and ‘cover their back’ whilst they do so? 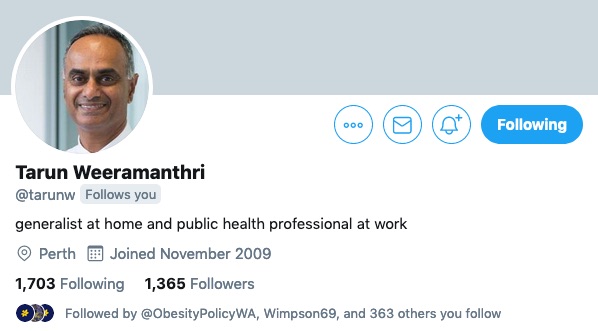 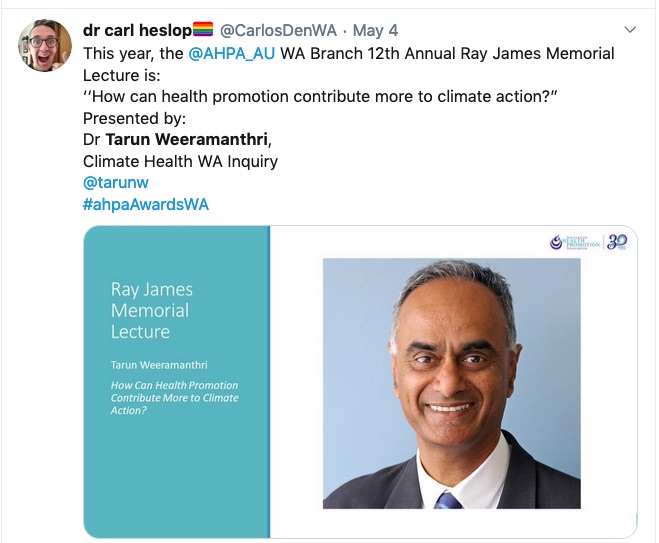 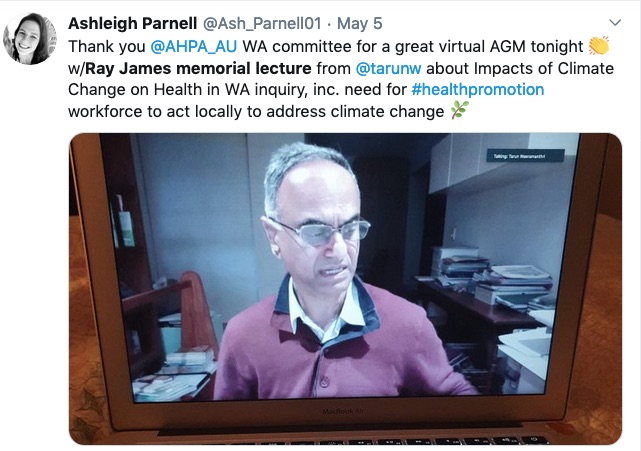 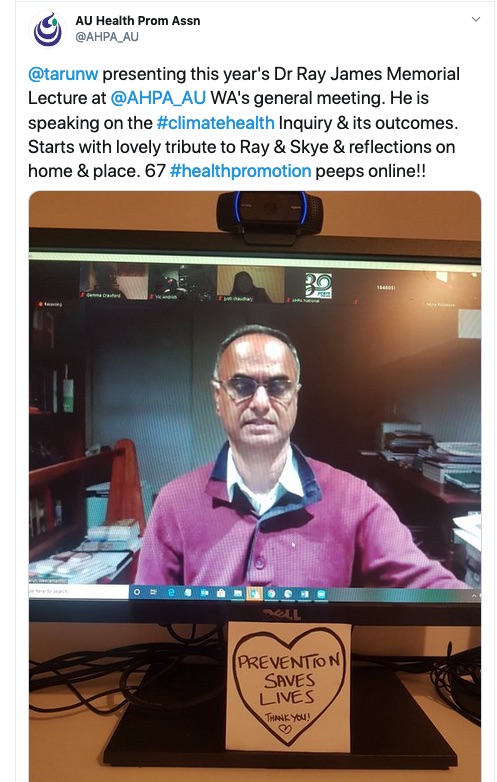 Meanwhile, a focus on student careers is coming up on 27 August… 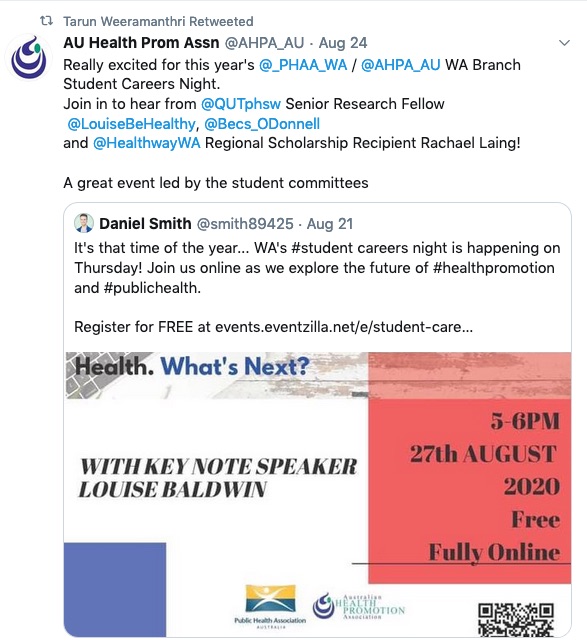