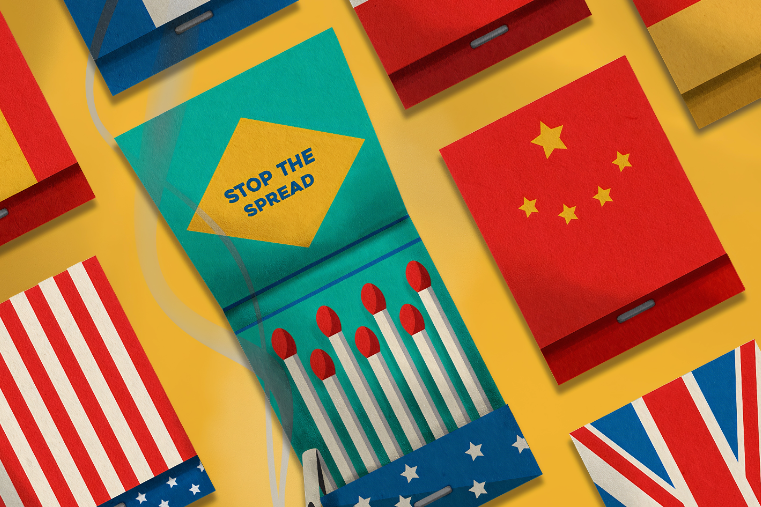 How do we counter COVID misinformation? Challenge it directly with the facts

Misinformation about COVID-19 has been a blight throughout the pandemic, and continues to undermine and derail efforts to contain the coronavirus and roll out vaccinations. It’s come not just from confused everyday citizens and those with agenda to pursue, but many politicians with big audiences, not least of course former US President Donald Trump and Australian government MPs.

In the article below, originally published at The Conversation, Associate Professor Adam Dunn, head of Biomedical Informatics and Digital Health in the School of Medical Sciences at the University of Sydney, looks at the impact and risks, and what governments, social media and the public health sector should do about it.

The government is rolling out a new public information campaign this week to reassure the public about the safety of COVID-19 vaccines, which one expert has said “couldn’t be more crucial” to people actually getting the jabs when they are available.

Access to vaccines is the most important barrier to widespread immunisations, so this campaign should go a long way toward getting the right people vaccinated at the right time.

But it also comes as government ministers — and even the prime minister — have refused to address the COVID-19 misinformation coming from those within their own ranks.

COVID-19 vaccines are rigorously assessed by the @TGAgovau before they can be used in Australia. Visit https://t.co/g4IbPPSzQn to learn more about the rollout of the #COVID19 vaccines. pic.twitter.com/J3GY6gyueZ

Despite advice from the Therapeutic Goods Administration explaining that hydroxychloroquine is not an effective treatment for COVID-19, MP Craig Kelly has continued to promote the opposite on Facebook. A letter he wrote on the same topic, bearing the Commonwealth coat of arms was also widely distributed.

He has also incorrectly advocated the use of the anti-parasitic drug ivermectin as a treatment for COVID-19, and encouraged people to protest against what he called “health bureaucrats in an ivory tower”.

I spend much of my time examining how researchers introduce biases into the design and reporting of trials and systematic reviews. Kelly probably has less experience in critically appraising trial design and reporting. But if he and I were competing for attention among Australians, his opinions would certainly reach a much larger and varied segment of the population. 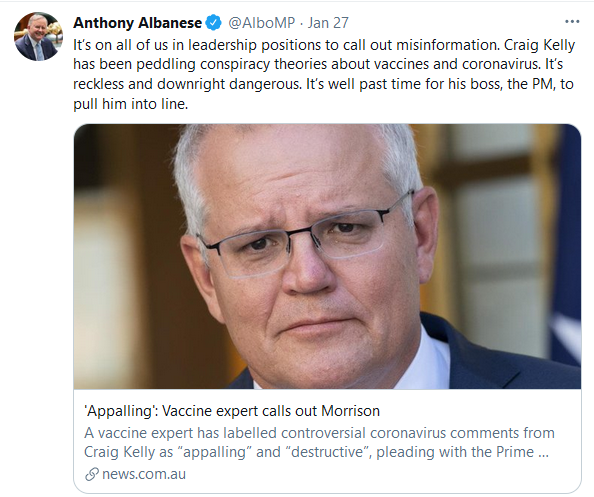 Does misinformation really cause harm?

According to a recent Quantum Market Research survey of 1,000 people commissioned by the Department of Health, four in five respondents said they were likely to get a COVID-19 vaccine when it’s made available.

Australia generally has high levels of vaccine confidence compared to other wealthy countries – 72% strongly agree that vaccines are safe and less than 2% strongly disagree.

But there does appear to be some hesitancy about the COVID-19 vaccine. In the Quantum survey, 27% of respondents overall, and 42% of women in their 30s, had concerns about vaccine safety. According to the report, this showed

“a need to dispel some specific fears held by certain cohorts of the community in relation to potential adverse side effects”.

For other types of COVID misinformation, a University of Sydney study found that younger men had stronger agreement with misconceptions and myths, such as the efficacy of hydroxychloroquine as a treatment, that 5G networks spread the virus or that the virus was engineered in a lab.

Surveys showing how attitudes and beliefs vary by demographics are useful, but it is difficult to know how exposure to misinformation affects the decisions people make about their health in the real world.

Studies measuring what happens to people’s behaviours after misinformation reaches a mainstream audience are rare. One study from 2015 looked at the effect of an ABC Catalyst episode that misrepresented evidence about cholesterol-lowering drugs — it found fewer people filled their statin prescriptions after the show.

When it comes to COVID-19, researchers are only starting to understand the influence of misinformation on people’s behaviours.

After public discussion about using bleach to potentially treat COVID-19, for instance, the number of internet searches about injecting and drinking disinfectants increased. This was followed by a spike in the number of calls to poison control phone lines for disinfectant-related injuries.

The aim of countering misinformation is not to change the opinions of the people posting it, but to reduce misperceptions among the often silent audience. Public health organisations promoting the benefits of vaccinations on social media consider this when they decide to engage with anti-vaccine posts.

A study published this month by two American researchers, Emily Vraga and Leticia Bode, tested the effect of posting an infographic correction in response to misinformation about the science of a false COVID-19 prevention method. They found a bot developed with the World Health Organization and Facebook was able to reduce misperceptions by posting factual responses to misinformation when it appeared.

Read more: Why is it so hard to stop COVID-19 misinformation spreading on social media?

A common concern about correcting misinformation in this way is that it might cause a backfire effect, leading people to become more entrenched in misinformed beliefs. But research shows the backfire effect appears to be much rarer than first thought.

Vraga and Bode found no evidence of a backfire effect in their study. Their results suggest that responding to COVID-19 misinformation with factual information is likely to do more good than harm. 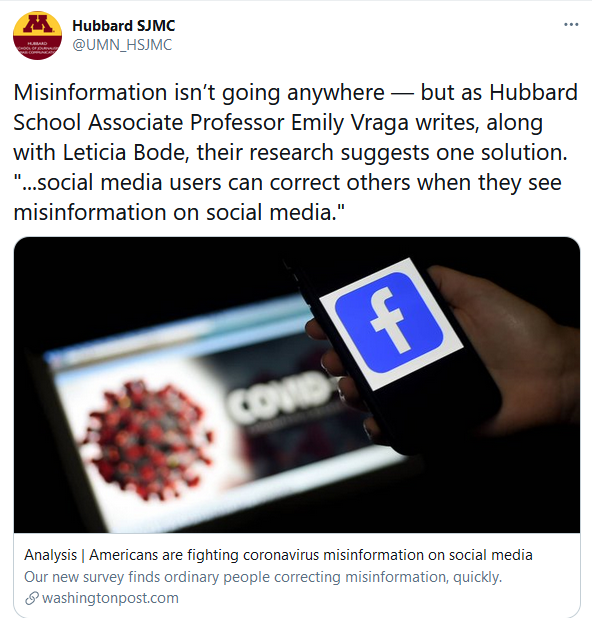 So, what’s the best strategy?

Social media platforms can address COVID-19 misinformation by simply removing or labelling posts and deplatforming users who post it.

This is probably most effective in situations where the user posting the misinformation has a small audience. In these cases, responding to misinformation with facts in a more direct way may be a waste of time and could unintentionally amplify the post.

When misinformation is shared by people like Kelly who are in positions of power and influence, removing those posts is like cutting a head off a hydra. It doesn’t stop the spread of misinformation at the source and more of the same will likely fill the void left behind.

Read more: Most government information on COVID-19 is too hard for the average Australian to understand

In these instances, governments and organisations should consider directly countering misinformation where it occurs. To do this effectively, they need to consider the size of the audience, respond to the misinformation and not the person, and present evidence in simple and engaging ways.

The government’s current campaign fills an important gap in providing simple and clear information about who should get vaccinated and how. It doesn’t directly address the misinformation problem, but I think this would be the wrong place for that kind of effort, anyway.

Instead, research suggests it might be better to directly challenge misinformation where it appears. Rather than demanding the deplatforming of the people who post misinformation, we might instead think of it as an opportunity to correct misperceptions in front of the audiences that really need it.

PrevPreviousNetwork connects Indigenous Knowledges in the Arctic and US Southwest
NextCaroline de Costa: Why I am returning my Order of Australia awardNext