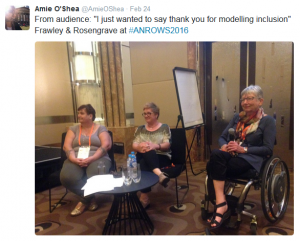 What does it take to make sure that we have informed and effective tertiary responses to violence and abuse of women and girls with disabilities in Australia?

More focus and more collaboration. But in particular recognising the intersectionality of violence – connecting with the question of disability in all research about violence against women, in Aboriginal and Torres Strait Islander communities, culturally and linguistically diverse communities, rural and remote areas, or elsewhere.

That was the message in this Croakey #Periscope discussion between Deakin University’s Dr Patsie Frawley and Women with Disabilities Victoria Executive Director Keran Howe at last week’s National Research Conference on Violence against Women and Children hosted by Australia’s National Research Organisation for Women’s Safety (ANROWS).

The interview followed Frawley’s conference presentation of her research work for ANROWS, which has seen this state of knowledge report published as the first stage in the project on tertiary responses to violence and abuse for women and girls with disabilities (see p19 of ANROWS Research Program).

Annie Blatchford, who is covering #ANROWS2016 for the Croakey Conference News Service, reports on the discussion below.

It comes in a context where women and girls with disability, particularly cognitive impairments, are consistently identified as experiencing violence and abuse at rates of between 40-70 per cent per cent higher than women in the general population, and more like to experience violence from multiple perpetrators and over extended periods.

However, anecdotal evidence suggests that women with disability are less likely to be believed when they disclose violence, have poor access to effective and timely information and support services and poor justice outcomes.

See also wraps below of projects involving immigrant and refugee women and a participatory action research program involving Aboriginal women in Alice Springs described by one participant as “better than therapy”.

Dr Patsie Frawley told ANROWS delegates that it is imperative for researchers to ensure they have resources and methodologies that allow for the inclusion of women from groups that are often marginalised, including women with disabilities.

Frawley, who is Senior Research Fellow at the School of Health & Social Development – Disability & Inclusion at Deakin University, said academics need to empower disability services and make use of their expertise – a research strategy that is being used in the ANROWS funded project looking at tertiary responses to violence and abuse against women and girls with disabilities.

The two-year national project will identify models of good practice for responding to women and girls with disabilities who have experience family violence or sexual assault. It includes in-depth case studies of disability services in Victoria, New South Wales and South Australia, built on interviews with the service managers, focus groups with clients, and a consultative research group of women with disabilities with expertise around violence against women.

Frawley later told Croakey that ANROWS commitment to fund a stream of research around disability is a wonderful opportunity that is not found from other sources such as the Australian Research Council, National Health and Medical Research Council or even disability funded research.

She warned, however, that an isolated stream of research can give the impression that women with disabilities are the responsibility of only one group of researchers when in fact it should be an issue identified and assessed by all.

The phenomenon of ‘intersectionality’

The literature review prepared by Frawley’s team as the first stage of the project, to map out the ‘state of knowledge’ currently available, states that that violence against women with disabilities is not a simple matter of gender.

According to the research, violence against women is not limited to any group or class in society and the experience depends on factors such as class, culture, disability and gender identity – a phenomenon called ‘intersectionality’.

The research team called for more data to understand experiences of disability in Aboriginal communities, rural women with disabilities. and those from culturally and linguistically diverse backgrounds along with information about income, education and other social indicators of inclusion and experiences of violence and abuse.

“Collaboration with women with disability organisations and cross sector work is the only way we get to the intersectional message about violence and how disability is absolutely a part of that story,” Frawley said.

Frawley referred to the cross-sectoral work of Women with Disabilities Victoria (WDV), the Office of the Public Advocate and Domestic Violence Resource Centre on the Voices Against Violence project which investigated the nature of violence against women with disabilities in Victoria.

WDV Executive Director Keran Howe, who facilitated the presentation, said it was important that disability advocacy services such as WDV are resourced to make a contribution to research.

“[Research] takes time, work and thought. We need to do it properly and to do that we need to be funded,” she said.

Frawley said organisations such as WDV are set up to create connections with women with disabilities and so they are in a prime position to help inform research. However, this cannot be done without researchers being able to fund and support them through honorariums, meeting spaces, taxi vouchers and so forth – “everything has a cost”.

Throughout the research project, Frawley said the researchers are taking information they have learned back to the three case study sites so they could put best practice in place – establishing a form of ‘participatory ac

tion research’. The project also involves a consultation research group of women with disabilities who had all done work around sexuality, abuse prevention, domestic violence and self-advocacy.

A member of the consultation group, Jane Rosengrave, spoke to the ANROWS audience about the importance of women having their own say so their experiences of violence could be properly addressed.

As was re-tweeted a number of times throughout the presentation, ‘Nothing about us, without us’ continues to be the all-inclusive catchcry for using on-the-ground expertise, respectful collaborations, intersectionality and participatory action research.

Be sure to hear refugee and immigrant women’s voices

With 20 per cent of the Australian population born in places where English is not the first language, it is clear that immigrant and refugees are not an “exotic” group of people, said University of Melbourne’s Dr Cathy Vaughan.

“Immigrant and refugee women are a large proportion of the population and need to be considered across all of our work – cities, health care, technologies, same-sex relationships and children,”  Vaughan said. 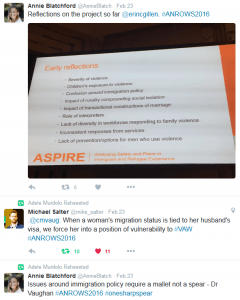 The ASPIRE project’s review of the current state of knowledge rpresented a number of ways factors such as gender, culture, displacement and marginalisation can intersect.

For example, it says, immigration policies can cause tensions when women rely on perpetrators of violence for economic security and residency rights, and many women will try to resolve family violence without leaving the perpetrator or breaking up the family because of immigration concerns or family and community pressures.

The paper also revealed limitations in researching this group, including that studies are often conducted in English (thus excluding a large proportion of women that are trying to be reached) and that data is often from service providers rather than the women themselves.

A positive finding however was the identification of an Australian participatory research project conducted in collaboration with service provider, inTouch Multicultural Centre against Family Violence.

The project found that women were unsure about the family violence system and how to access support and that distrust of the system could be linked to lack of integration between family violence and settlement services – yet another display of the need for collaboration and interagency work. 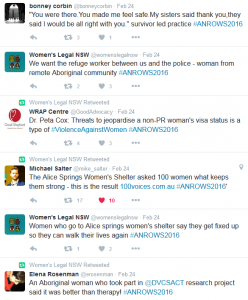 The ANROWS project ‘Advocacy for safety and empowerment’ worked with the four services; Ngaanyatjarra Pitjantjatjara Yankunytijatjara, Women’s Council Family and Domestic Violence Service, ACT Domestic Violence Crisis Service and the Alice Springs Women’s Shelter to speak with both workers and clients about what makes an effective service.

ACT Domestic Violence Crisis Service worker Jennifer Cook presented a series of photos to the ANROWS audience which were previously shown to women involved in the project to help them identify their feelings during and after periods of crisis.

The Aboriginal women responded to pictures reflecting times of violence with the words “trapped”, “scared” and “shredded” and went on to use language such as, “safer”, “reassured” and “hope for the future” in response to post-crisis images.

“The shelter is good. You can come here and you can get a hot shower, have a sleep, washing clothes, watching TV”

“Cup of tea, happy and comfortable talking story with other women.”

University of New England Research Consultant Cath O’Learly spoke on behalf of Ngaanyatjarra Pitjantjatjara Yankunytijatjara (also known as the Women’s Council) about what women who had used the service in the last 12 months thought made a good worker.

“We want the worker between us and the police”

“A good worker…takes the worry from you so you can relax and tell your story, let it out.”

The project’s literature review prepared by Griffith University Research Fellow Dr Robyn Holder, University of New England Adjunct Senior Lecturer Dr Judy Putt and O’Leary echoed the findings of many other ANROWS projects that ground-up and active involvement of communities in planning, delivering and evaluating responses to violence against women is best practice.

“Empowerment is a complex and malleable notion but self-definition is the critical starting point.”

More from the #ANROWS2016 Twitterverse 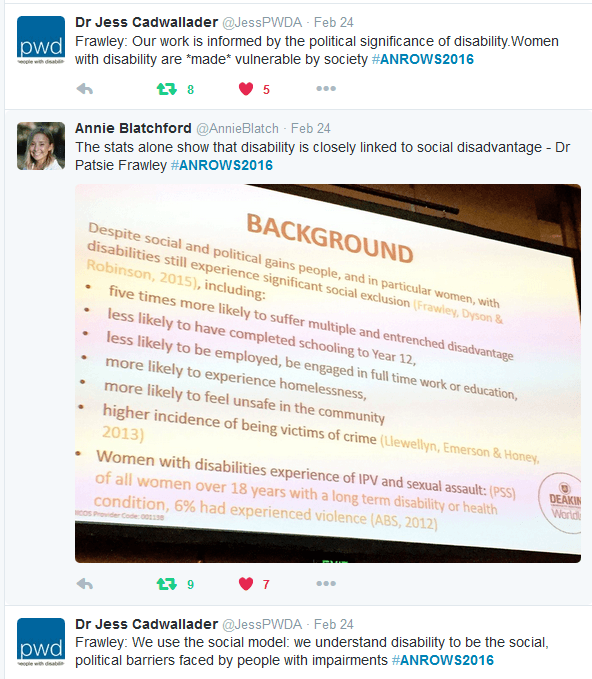 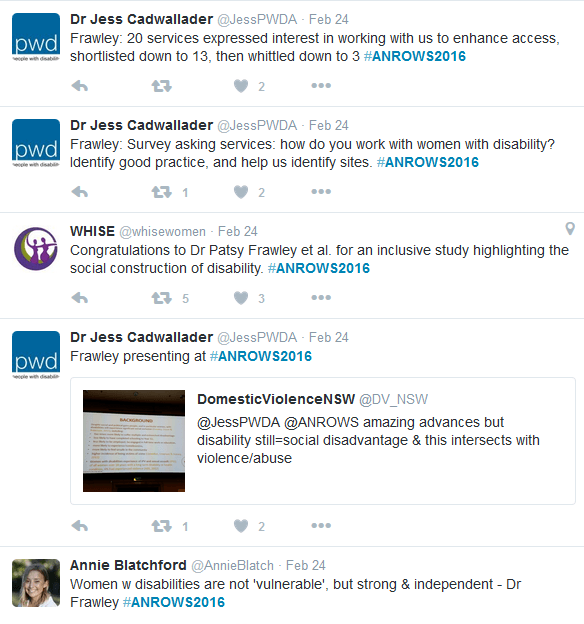 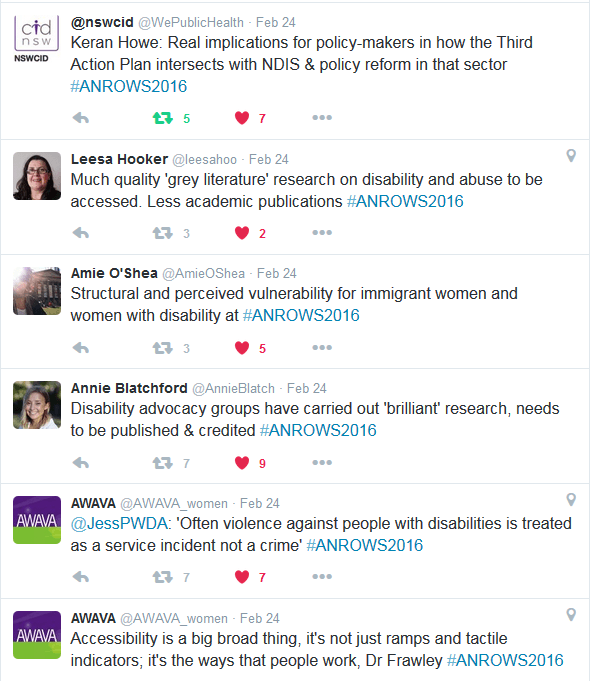 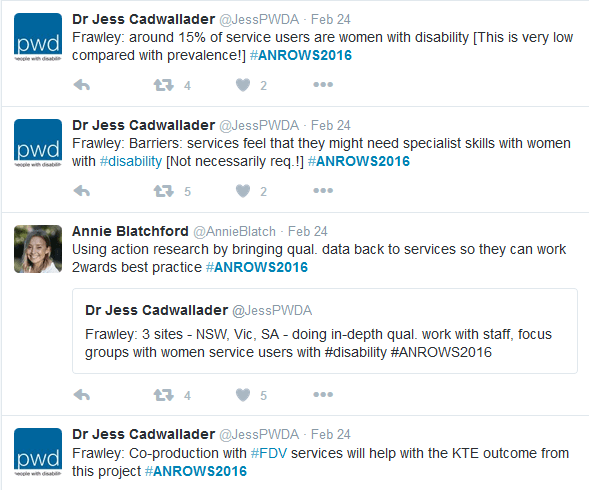 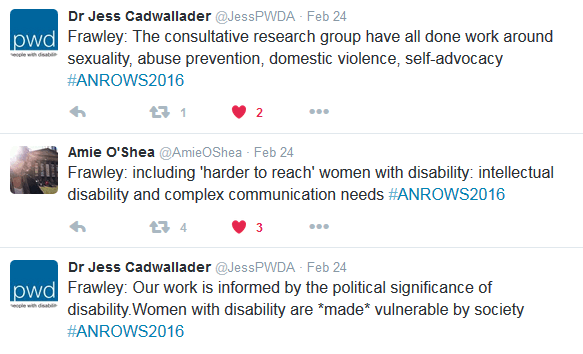 PrevPreviousRethinking national registration: sharing the load will relieve the problem of AHPRA’s unwieldy bureaucracy
NextMSF report: Women and children in PNG forced to return to abusersNext