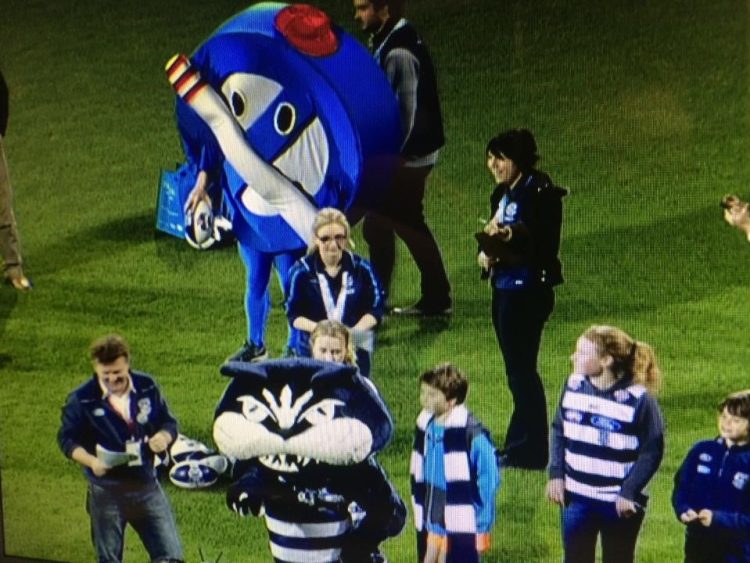 Ben O'Mara as the 'Quitman'

Australia has been very successful in reducing the rates of smoking in our community through using a wide range of strategies, including health promotion campaigns, to communicate the dangers of tobacco use and the benefits of quitting.

However, to continue this success our communication strategies have to change to reflect the changes in the media environment and broader community.  We can also all take on the responsibility of promoting health and well-being through our everyday lives (something Croakey has been doing via Croakey GO.)

These issues are discussed in following piece from Ben O’Mara who was once (literally) in the middle of a quit smoking health promotion campaign. This experience led him to reflect on the limitations of mass media campaigns and the opportunities for supporting healthy lifestyle choices in our everyday interactions with others.

My first, and only, time holding a football in front of thousands of screaming Australian Rules Football fans was not as a player, coach or umpire, but when I worked as a mascot promoting an app for quitting smoking.

It was 2014. The North Melbourne Roos were taking on the Geelong Cats at Skilled Stadium in the heartland of Geelong – Victoria’s second largest city. In Geelong, the rates of smoking were higher than the state average, and many people who smoked and their family and friends were likely to be in the stands.

So I pulled on Quit Man’s bright blue tights and puffy blob of a suit, and wobbled my way across the stadium’s pristine turf. Cameras flashed. Music blared a call to battle. Cries for hot pies sailed across a swelling wave of sounds as game time approached.

Who the hell is going to notice me? I thought, waving to the big and noisy crowd. The reality of the situation had kicked in, and my mind raced.

How does anyone hear a quitting smoking message with so much distraction?

The ways we learn about health have changed

Away from the footy field, promoting help for quitting smoking to big audiences is relatively recent in Australia. Quitline is a telephone counseling service that can help increase a person’s chance of stopping smoking, and was first featured in television advertisements during the late 1990s. More people called Quitline after the advertisements were broadcast.

But people access health information differently now as broadcast television competes with smartphones, tablets and other screens for our attention. Now, ads for Quitline pop up in Facebook feeds. Nicotine patches can be ordered online.

For those who believe that electronic cigarettes help people quit smoking, the companies selling the devices even have their own Twitter profiles and YouTube channels.

I rocked up to the footy as Quit Man to spruik my message in real-time, face-to-face. And blue leggings aside, I believed in the cause.

Many people who smoke are interested in quitting. And with the cost of cigarettes rising, as well as more public spaces becoming smoke free, daily life is only becoming harder for smokers.

Communicating with our family, friends and others about help for quitting smoking, or other issues like healthy eating or managing stress and anxiety, is not always easy though – especially at a footy game.

Even when my donut-like figure appeared on the stadium’s giant television screen, and the game announcer’s voice boomed, cheerily promoting the quitting smoking app, I doubted the message was being understood.

I waved again to the crowd, the app flashed across the television screen, and the sea of noise from the crowd droned on, loud, indifferent. I imagined the fans talking to each other. Messaging their friends on Facebook. Checking their phones for the scores of other football games.

My heart sank. For a moment, the message I had come to share was everywhere… but no-one was listening. Then I realized – maybe I had things the wrong way around.

Maybe it was me, still stuck in a one way, broadcast mode of thinking, who wasn’t really listening.

Listening is subtle. Listening requires giving someone careful attention. Like letting another person speak without interruption. Or acknowledging another person’s perspective, and setting aside one’s own judgment.

Listening better can create a relationship based on empathy and respect.

Empathy can positively impact on a person’s health. Empathy helps people feel supported when they are vulnerable, anxious and distressed. Respecting a person’s gender, language, ethnicity and religion may positively affect their decisions about health, such as consent to undergo procedures and treatment.

Improving access to help available for quitting smoking and other health issues could lead to better quality of life, and save lives.

But listening is not just about information gathering; it’s about trying to finding a common ground, and understanding someone as a whole. And listening can help us to act on health with greater knowledge, and compassion.

Transforming reality with others by listening better

Paolo Freire, the Brazilian educator and philosopher whose work has been influential in health, wrote about helping people to read and write, describing a person who listens as someone able to see reality, and transform it, with others:

This individual is not afraid to confront, to listen, to see the world unveiled. This person is not afraid to meet the people or to enter into dialogue with them. This person does not consider himself or herself the proprietor of history or of all people, or the liberator of the oppressed; but he or she does commit himself or herself, within history, to fight at their side.

Freire was writing about experiences of hunger, poverty and colonization. Yet, Freire’s argument that the listener meets with the people, and works with them, in conversation, is a valuable one for health because it offers a way of listening that is rooted in action together.

I can’t tell you whether anyone download the app for quitting smoking after seeing me as Quit Man that night at the footy.

I do know, however, that a conversation about health is not a mascot promoting a health message to a noisy crowd – a conversation is, at its best, an intimate, shared experience.

Making time for others in a world of distraction

I’m not against health mascots. If I’d known how to somersault or do cartwheels in my mascot suit, maybe the footy fans would have taken more notice of my quitting smoking message. And perhaps it’s impossible to have dedicated conversations with anyone at a footy game.

Mascots, the footy, watching movies on Netflix and noodling on Facebook can all be entertaining and pleasurable distractions from the daily grind of life. And there’s nothing wrong with taking time out for the things we enjoy.

Entertaining distractions come and go, however. Like an app for quitting smoking. Or e-Cigarettes, patches, mouth sprays and other products.

Products that help people quit smoking and entertainment have their place, but are no substitute for how we spend time with our friends and the people we love. And the ways we listen, and help, others.

I won’t be resuming my mascot career any time soon. For now, I’m focused on trying to give someone else the time and space to talk when it comes to their health.