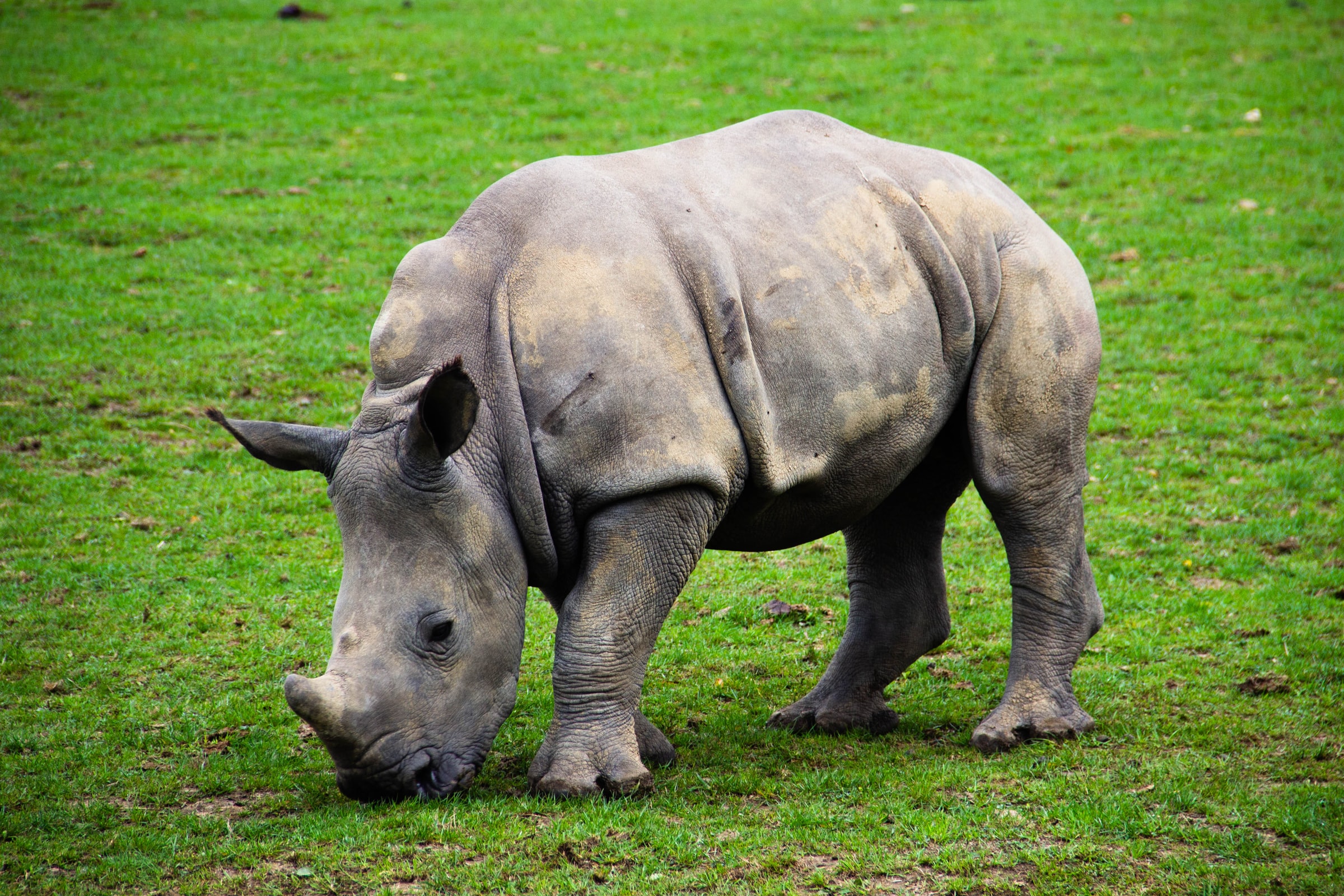 Healthcare is going green, with help from the rhinos. Photo by Philippe Oursel on Unsplash

Introduction by Croakey: As Australians demonstrate their support for political action on climate change, “strong, determined leadership” in the healthcare sector is driving changes to promote sustainability and reduce the carbon footprint of services.

Many examples of such initiatives were profiled at the recent Choosing Wisely Australia National Meeting, held online on May 3.

The new Federal Government has promised to implement a national climate and health strategy, and the Climate and Health Alliance has previously released a framework for this strategy. It recommends establishing national and subnational plans by 2023 to decarbonise healthcare by 2035, and supporting the health sector to lead on mitigation of healthcare-related greenhouse gas emissions.

Reducing low value healthcare has clear safety and quality of life advantages for patients and can also make a real difference to the impact that the health system has on the environment and climate change.

In her introductory presentation to the conference, Choosing Wisely Australia CEO Katherine Burchfield highlighted the importance of reducing unnecessary tests, treatments and procedures, given that low value care in Australia contributes to 20 percent of the waste in the health system.

Chair of Choosing Wisely Canada, Dr Wendy Levinson, agreed that this should be a priority for the Choosing Wisely movement globally, adding that in Canada five percent of greenhouse gases come from healthcare.

Levison discussed the “hidden” environmental impact of many medical tests and treatments, such as a CT scan, which she said has the equivalent carbon footprint of driving a car for 32.5km.

“Reducing low value care is good for patients and good for the environment,” she said.

Burchfield also emphasised the equity implications of sustainability, explaining that it is important to ensure we have enough resources to deliver high quality healthcare for all so that our health system is capable of meeting our needs into the future.

The breakout sessions showcased specific projects being undertaken across the health system in order to reduce unnecessary care and improve health system sustainability.

A presentation from Grace Wong, Senior pharmacist at Western Health and founder of Pharmacists for the Environment Australia, reported on the work being done by the Western Health Pharmacy Department to establish a pharmacy environmental sustainability program.

Wong reported the findings of a 2018 study showing that pharmaceuticals and hospitals are the main contributors to the carbon footprint of the health system in Australia.

She described her role as the “Green Champion” of the pharmacy department in contributing to the local sustainability action plan for the hospital network, part of its environmental management roadmap.

Part of this action plan is a commitment to develop and support environmental sustainability ideas. This involved brainstorming sessions with staff, many of whom were new to the idea that their work could impact the environment and climate change.

At the brainstorming sessions, waste management was identified as a key priority and an initial rubbish bin audit found that the department produced 100,000 kilograms of waste per year – the equivalent of 55 adult rhinoceroses.

Wong launched a “green rhinos” education campaign, which resulted in interventions to reduce waste, including changing to recycled paper in their printers, going paperless where possible and organising for a local recycler to take their polystyrene.

Wong discussed how pharmaceutical waste is a complex issue, with ethical, legal and practical dimensions involving many layers of healthcare management and health professionals.

Dr Corey Joseph and Dr Jonathan Foo, from the Cabrini Institute, outlined the results of an audit they conducted on colonoscopies performed at six Victorian public hospitals.

This audit looked at whether colonoscopies targeting people at increased risk of bowel cancer were being performed in accordance with current evidence-based guidelines.

To increase concordance with guidelines, Foo and Joseph recommended tailored strategies to address barriers to implementation and to optimise treatment recommendations.

Caitlin Farmer, a PhD candidate from Monash University, undertook a systematic review of modifications to diagnostic imaging reporting to determine if they improved patient care.

She found some evidence that modifying reports may improve patient care, specifically if the reports include information about appropriate care.

Joshua Zadro, an NHMRC Emerging Leadership Fellow from the University of Sydney, presented his research into whether a decision aid for shoulder surgery improved treatment decisions and outcomes.

Zadro said one reason for this might be that the decision aid was introduced to patients after most of them had already seen a surgeon and decided on a treatment.  He suggested that further research should look at whether it could have more impact if used earlier in the treatment journey.

Antipsychotic prescribing in people admitted to hospital with dementia or delirium was the focus of a study conducted by pharmacists Caitlin Hardman and William Tumusiime.

They audited a sample of patients with dementia or delirium over 65 and found that over half had been prescribed antipsychotics without evidence of adherence to prescribing guidelines (which include trying other strategies first).

This led them to conclude that many doctors are using anti-psychotics as a first approach to treating people with delirium and dementia, which is problematic given that the evidence indicates that these medications are not beneficial for most people.

Another finding from the study was a clear lack of management plans for antipsychotic review post-discharge, despite the fact that ongoing use of these medications was high risk.

Hardman and Tumusiime recommended the introduction of limitations on the prescribing of antipsychotics and requirements for regular reviews and de-prescribing. They also suggested mandating antipsychotic discharge plans.

Dr Holly Theile reported on a project she conducted with colleagues at the Sunshine Coast University Hospital to limit unnecessary preoperative pathology tests.

Initial research undertaken as part of the project found that 41 percent of patients had incorrect pathology. This led to the development of new protocols to reduce unnecessary testing and ensure patients do not have to incur the inconvenience and risks associated with tests they do not need.

Two presentations focussed on action being taken by Mercy Health to decrease their carbon footprint and support the sustainability of the health system.

Dr Lisa Rasmussen, Clinical Lead, Care for People and Planet Strategy, at the Mercy Hospital for Women, described work being undertaken at the Mercy to increase sustainability. This includes establishing  a new emergency department “green team”, including a GP liaison officer and an overall waste and recycling strategy, currently being finalised.

Rasmussen stressed the need for “strong determined leadership and brave models for change” in order to address climate crisis.

So far the strategy has resulted in the development of Local Area Sustainability Plans for operational areas and Choosing Wisely plans for individual clinical areas.

At the conclusion of 2022, Mercy Health will evaluate, celebrate and communicate their climate mitigation successes, and will be a case study for other health services to investing in resource to embed Choosing Wisely as a key response to the climate emergency.

Professor Beena Kumar, program director of pathology at Monash Health, was the winner of the organisation category.

Kumar received this award for her work on a pathology stewardship project which introduced a traffic light model to encourage clinicians to stop and think before ordering tests.

Winner of the consumer category, Deb Letica, described how proactive awareness raising of Choosing Wisely and five questions can help consumers discuss whether a test or treatment is needed.

“We all need to question tests and why we want it. When bulkbilled we think it’s free but someone is paying. When costs are invisible patients have no idea what the carbon footprint is,” she said.

The need to take a systemic approach to reducing the health system’s carbon footprint was the focus of a keynote address from Dr Arnagretta Hunter, a physician, cardiologist and the Human Futures Fellow, College of Health and Medicine, Australian National University.

Hunter described climate change as a major health challenge and criticised the traditional approach of medicine, which she said is too focussed on biology of disease.

She stressed the importance of the social determinants of health, including environmental factors such as clean air and water, and highlighted the scale of this issue, pointing out that during the recent heatwaves in India around 10 percent of the world’s population was living in heat stress.

She also said that even in well-resourced areas people die in heatwaves.

Hunter stressed the important role of healthcare in combating climate change, given that seven percent of Australia’s carbon footprint comes from the health sector. 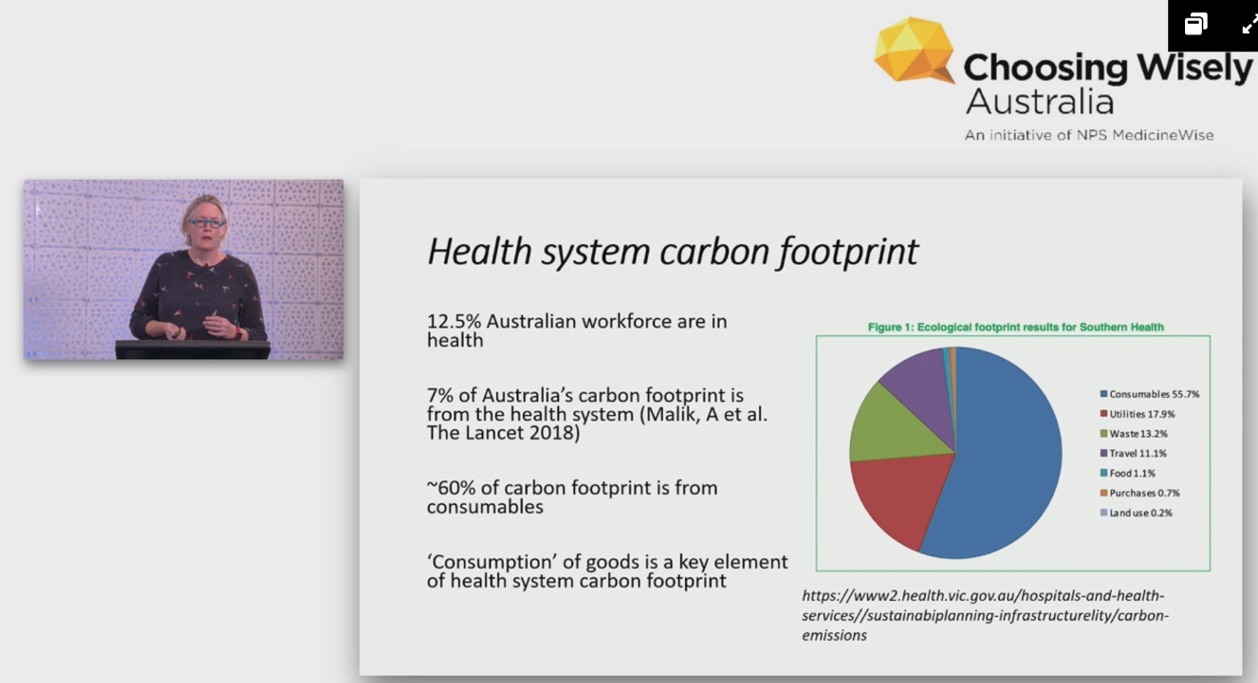 She urged the health sector to decarbonise as quickly as possible and suggested that the key factor here was to address “Scope 3 emissions” (emissions from all that is consumed through healthcare, including pharmaceuticals, disposables, construction and food).

By reducing low value care, the health sector will also decrease its carbon footprint. Hunter echoed the concerns of others at the Choosing Wisely meeting about systemic barriers to achieving this goal.

“Interventions carry a much greater carbon footprint than conversations. But even when conversations are better quality care, our system prioritises intervention,” she said.

Hunter hopes that the recent experience of extreme weather, which she estimates has impacted 50 percent of the Australian population, has led to increased awareness of the need for climate action.

She cited economics as the main barrier to reducing low value care in the health system.

“Hospitals – both public and private – make money out of doing stuff. If we cut this back by reducing low and no value healthcare, then our hospital system would run differently. This could affect the income of doctors and shareholders.”

She argued for the deep adoption of Choosing Wisely, which she said would dramatically change the health system, potentially resulting in fewer hospital admissions, and more investment in physical activity, social engagement and working arrangements so people have time to improve and maintain their health.

“I don’t buy the argument that patients always want stuff done,” Hunter said. “In my experience if there is a relationship of trust, it’s possible to have an honest conversation which allows patients to make an informed decision. Many of them will then choose not to go ahead with a low value test or treatment. But a system which rewards high volumes and doesn’t reward saying ‘no’ to treatment works against this.”

Hunter argued that Choosing Wisely can address these incentives but stressed the difficulties involved in pitching strategies to reduce low value care to a hospital manager if this means reducing incomes and changing roles of staff.  She also argued for better mechanisms for prioritising who needs care in the public health system.

She is also a strong supporter of doctors speaking out on climate change, given that they see the impacts of global warming on their patients.

“Wicked policy problems like climate change and obesity require a whole-of-system response. If we silo ourselves, we prevent progress in working across different disciplines,” she said.

“We need to get out of our lane – when we stay in our narrow speciality, we do our health system and society a disservice.” 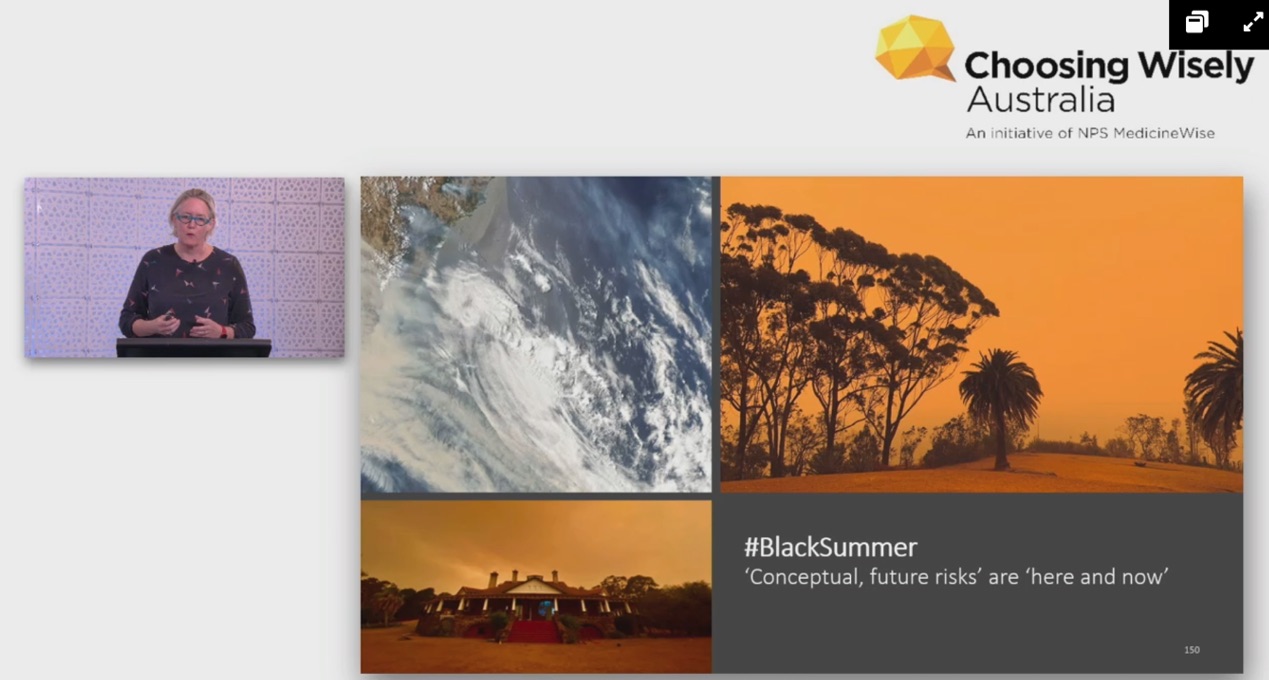 During the period of Croakey’s coverage, 69 Twitter accounts participated in the #CWANM22 discussions, sending 893 tweets and creating more than 10.6 million Twitter impressions (1 May-26 May, 2022). 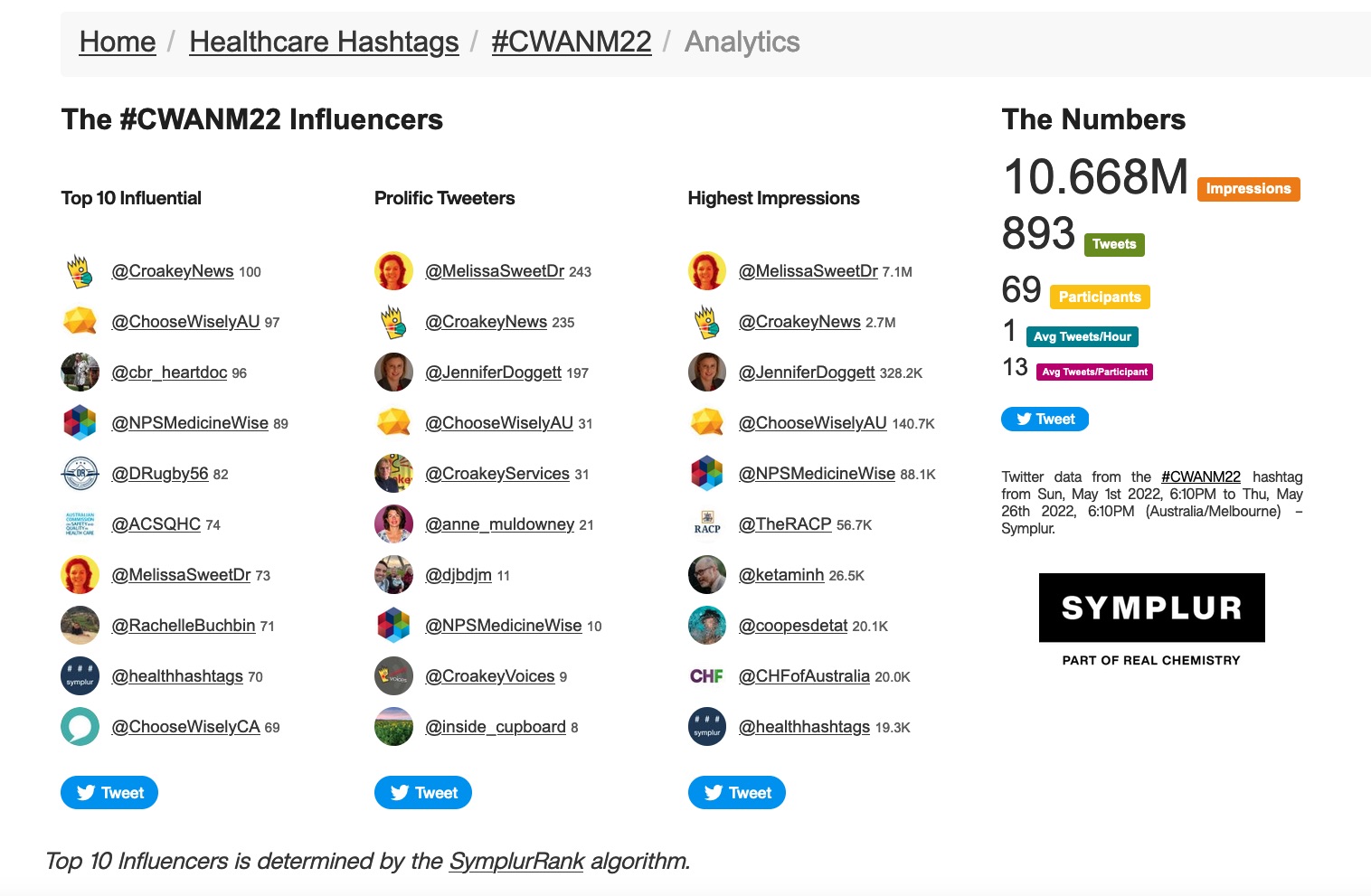 Bookmark this link for the Croakey Conference News Service coverage. Also see our coverage of the 2019 and 2018 conferences.

PrevPreviousAdvice to the 47th Parliament: be useful, mindful, kind and bold. Also, don’t work for climate-wreckers
NextNo health without peace, and other timely calls for Australia to re-focus on global health effortsNext