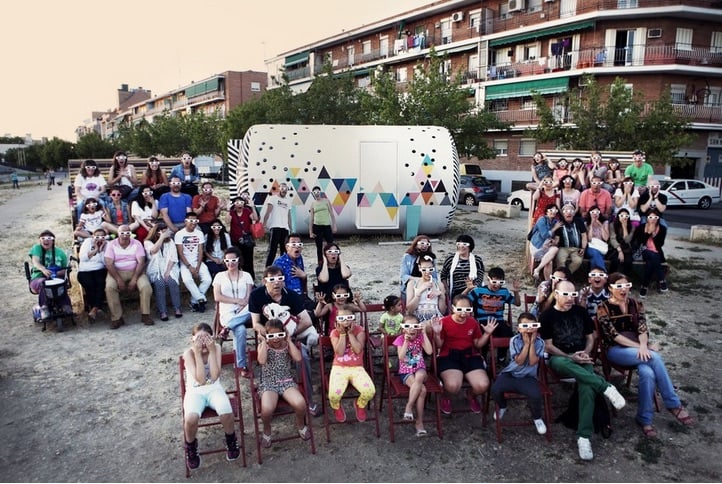 Since the 2008 economic crisis, Madrid has become the epicentre of major political and urban change. The city’s Indignados are back, asserting that residents have a “right to the city” as well as “lodging, work, culture, health, education, political participation, the freedom of personal development and the right to first-necessity products”, as expressed in the manifesto of the ¡Democracia Real Ya! movement. These and other groups have thus revived a traditional Madrilenian citizens’ movement, based in part on self-management.

This is witnessed today in the phenomena of laboratorios ciudadanos (citizen laboratories) created in vacant city spaces. Not the result of any urban-planning strategy, they seem to have materialised from the spontaneous impulse of ordinary citizens and highly qualified groups working together in areas like collaborative economy, the digital technology, urban ecology or social urbanisation. These laboratories are fertile grounds for open-source urban planning (in Spanish, urbanismo de codigo abierto) and collectively rethinking the urban commons. The challenge is to (re)make the city in situ, using neighbourhood resources rather than acting like public authorities or already-established municipal groups.

Citizen laboratories use digital tools and “hacker ethics” to reclaim and coproduce in Madrid’s vacant spaces. Some twenty laboratorios ciudadanos have emerged over the last few years, including La Tabacalera, Esta es une plaza or Campo de la Cebada. Each specialises in a particular field, such as agriculture and urban economy, social and cultural integration, collaborative art or digital economy.

The Campo de la Cebada came to be in October 2010, when the city decided to demolish a sports complex in the La Latina area. Residents and neighbourhood groups worked together to create and manage an area dedicated to citizen social and cultural initiatives, with shared gardens and sports fields. Benches and bleachers were designed and made from recycled materials using free designs and fab-lab tools. Participants even created a geodesic dome 14 metres in diameter for hosting different cultural and social events.

The Campo de la Cebada has since grown to include exchange services, workshops for street art, photography, poetry and theatre, and events such as open-air music and film festivals. Activities are totally self-managed by groups representing residents, retailers, and associations, as well as architects, urban planners, researchers and engineers. It’s administered collectively rather than within the closed circle of a few elected officials or experts. Its objective is “that anyone may feel concerned and be implicated in the functions of the place”, according to Manuel Pascual of the Zuloark architectural agency.

Community groups such as Ecosistema Urbano, Basurama, Todo por la Praxis or Paisaje Transversal are also testing an urbanism based on collaborative management, experimentation, sustainable development, and the integration of artistic and cultural events. Inspired by the universe of open-source software, these groups advocate open-source urban planning. This translates into the development of design-thinking methods and digital tools that can help stimulate citizens’ ability to express themselves and their needs and turn projects into co-productions.

For example, the Basurama group organised an initiative called Autobarrios San Cristobal in which residents of a neglected Madrid neighbourhood developed a shared space using local knowledge and recovered materials. The Paisaje Tetuàn project encouraged residents of the Tetuàn neighbourhood to collaborate with urban architects, artists and designers to rehabilitate the central Leopoldo Luis square as well as its surrounding area.

Open-source urban planning is less a business than a process of establishing relational spaces required for building the commons. This is one of the objectives of collaborative digital platforms that can connect of socially different worlds. These platforms serve as a “middle ground”, connecting the “underground” of residents, users, hackers and artists, with the “upper world” of administrations, businesses and engineers.

The Media Lab Prado call-for-projects platform helps spread the word about workshops and experiments related to the city and shared spaces – urban agriculture, data visualisations, cultural events, urban economics, etc. The Media Lab Prado digital façade provides real-time information on research, workshops, and on-going experiments to residents of the Letras district are updated on programs, and also enables them to publish their own announcements for events as well as neighbourhood news.

The movement around Madrid’s public spaces has roots that stretch back to the Situationist International of the 1960s. It asserts that experimentation and the mobilisation of a wide range of knowledge, be it expert or profane, are the basis for renewed vision of the urban fabric. By inciting citizens to act directly on the urban landscape and to freely create daily life, it differentiates itself from militant politics, to defend an intense daily activism.

In contrast to Madrid’s experiments, the Situationist movement remains largely confined at a literary and conceptual level. New digital manufacturing techniques and tools have changed this situation. They enabled Madrid activists and residents to demand the material realisation of the Situationist ideal and to defend a “right to the infrastructure of cities”. This right is not limited to demanding equal access to city resources, but also concerns the city’s infrastructure, the “urban hardware”.

It going beyond social, educational and cultural life to coproducing city public spaces, equipment and other urban infrastructures. Thus Madrid’s movements are part of the “maker age”. In citizen laboratories, physical and material aspects come before intellectual and political considerations. Residents go first to the garden, where they can exchange and create; only then do they debate broader political issues. In this “soft activism”, the shared space becomes the new “interstice where political reconstruction could begin”.

Exploring Madrid’s urban experiments permits us to better understand the conditions needed to making the urban commons. First is some vacant space and the possibility of using a portion of it to experiment and create. The space also need to be intermediate – neither private nor public – and inherently unstable and suitable for gathering. Then come the digital tools and acquisition of the technical capacity to produce shared space. Finally the “making” begins, and with it the continuous interaction between the materials and the intellectual end result.

How such urban commons experiments are to be developed and managed over the long-term remains to be answered. From this point of view, everything remains to be done.

This article is cross-posted from The Conversation FR.