How many stars does Australia’s Health Star Rating earn for promoting healthy eating?

Australia’s Health Star Rating system which is aimed at guiding healthier consumer food choices has attracted plaudits, along with some strong criticism – indeed it’s been declared ‘freaking hopeless’ by one columnist, angered at how food companies have been able to manipulate ratings.

Chief among concerns have been examples of where the sugary drink Milo declared a 4.5 star rating (out of 5) based on its use with skim milk and Kellogg’s made small changes to Nutri-Grain in order to claim four stars. 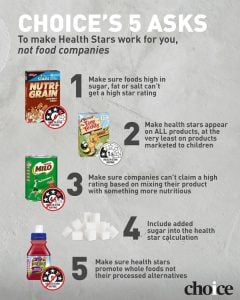 The HSR system is now under review, to consider “if, and how well, the objectives of the HSR system have been met, and identify options for improvements and ongoing implementation”. Public submissions closed last week and the review findings are due to go to the Australia and New Zealand Ministerial Forum on Food Regulation in mid-2019.

A spokesperson for the Front-of-Pack Labelling Secretariat told Croakey on Thursday that a summary of the issues raised through the public submission process will be made available on the HSR website, “however we are unable to advise an exact date at this stage”.

In the post below, Patrick Walker & Vu Nguyen from the Australian Medical Students’ Association (AMSA) say the Health Star Rating system has good potential to improve food choices, but has a number of critical limitations.

Drawn from AMSA’s submission to the review, they highlight the deficiencies and suggest some improvements, including capping discretionary foods at a maximum rating of 2.5 stars.

The Health Star Rating (HSR) system was implemented in Australia and New Zealand in 2014 to help improve the food choices we make. It is a valiant attempt to combat the obesity epidemic, but despite being founded on proven and effective principles, it has failed to fully realise its potential.

Endeavouring to improve, the government is currently conducting a five-year review of the program. This review is timely. With a few tweaks, the HSR system could go a long way to helping Australia combat obesity and the dramatic rise of non-communicable diseases that is damaging our lives, society, and economy.

More than 60 per cent of Australians are now either overweight or obese. Alarmingly, the same is true for one in four children. This is an epidemic of enormous proportions that we must address.

Front-of-package food labelling is designed to simplify food choices for consumers, to help them quickly identify how healthy different options are. It is a way of making it easy for people to make healthy choices.

In Australia, many packaged foods are currently given a star rating from 0.5 to 5 stars, based on the overall healthiness of the product. Similar foods can then – theoretically at least – be quickly and easily compared.

Still, it has shown promise in its ability to influence consumer food choices. One in 3 people who are aware of the system bought a product with a higher star rating than their normal choice. Of these people, most continued to buy the higher rated product.

However, before we can celebrate these numbers, we need to be confident the higher star ratings actually correspond to healthier foods. Unfortunately, this is not the case.

Despite its promise, the HSR system suffers from a number of limitations that have curbed its success: inadequate and unclear food categorisation, poor labelling of discretionary foods (foods and drinks not essential to our diet and that often do more harm than good to health), and poor uptake by manufacturers and retailers due to its voluntary nature.

The system divides all packaged foods into six main categories. These categories differ greatly from the Australian Guide to Healthy Eating and the Australian Dietary Guidelines, and significant heterogeneity within the groups makes it difficult to make accurate comparisons between products.

Category 2, for example, includes ‘all foods other than dairy not in Category 1 or 3’, and includes foods from four of the five main food groups. As the HSR system is designed to enable comparison of foods within the same group, this heterogeneity makes proper use of the ratings difficult. For example, when you’re comparing muesli bars with baked beans, you can see that ‘similar’ does not always mean similar.

This is compounded by poor labelling and consumer awareness of which category foods are actually in. The tendency to compare any two foods regardless of category is encouraged by the oversimplified (and inaccurate) mantra that ‘the more stars, the healthier’. This idea, while superficially attractive, only applies for foods in the same category – something which is often overlooked.

The system allows consumers to choose between two brands of chips, for example, but won’t help you choose out of chips and yoghurt. This is a problem as most people adopt the (encouraged) view that a higher rating automatically means that one product is healthier than another. This is quite evidently not always the case.

Further, many junk foods receive a relatively high star rating, but this does not necessarily mean they are healthy. Milo famously touts a 4.5 star rating on its package, despite uniform opinion that it is not, in fact, as healthy as this label implies.

Finally, the voluntary nature of the HSR has (predictably) meant that companies are significantly less likely to label foods with lower star ratings (see graph, below, from the Health Star Rating Advisory Committee). Consequently, it is difficult for consumers to get an accurate overall picture of how healthy what they’re buying truly is. 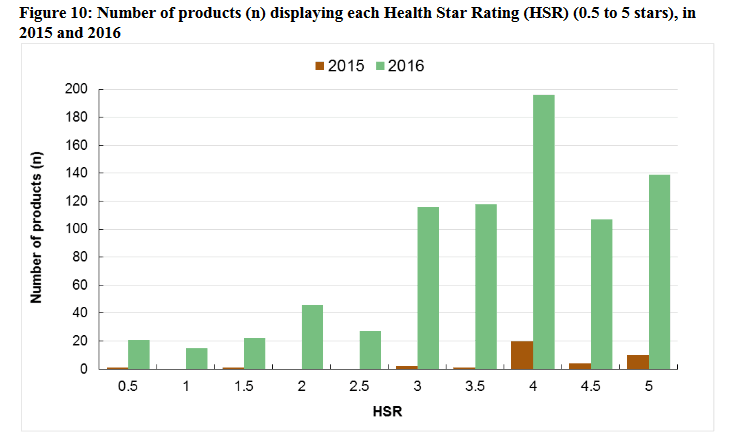 The current review into the HSR program is a perfect opportunity to build on what we’ve already achieved, and to help the HSR achieve its lofty aims. An improved HSR might look something like this.

Labelling of packaged foods and drinks sold in Australia should be mandatory, to increase use and awareness of the system. Food categories should be based on the Australian Guide to Healthy Eating, enabling more accurate comparison of similar foods.

Further, discretionary foods should be clearly marked, and capped at a maximum rating of 2.5 stars. This would prevent falsely elevated ratings of unhealthy foods, by  ensuring the star rating they receive does not exceed the point at which people think they’re healthy.

To complement the overall rating, foods high in kilojoules, sugar, salt or fat should be clearly and prominently marked, as occurs in Chile. Overall ratings can dilute the effects of individual components of products; highlighting whether foods are high in potentially harmful ingredients will arm shoppers with the knowledge they need to make informed choices.

Despite widespread criticism, the Health Star Rating could go a long way in improving our food choices. However, it cannot remain in its current form. Rather than abandon it, let’s improve it. With more and more Australians eating more and more unhealthy foods, this is something we cannot ignore any longer.