How much can you learn from a week of @WePublicHealth? Heaps about Indigenous health, general practice and more

@WePublicHealth, if you haven’t already met, is a new Croakey initiative that aims to encourage citizen journalism with a public health focus.

Each week, there is a different guest tweeter, and last week GP Dr Tim Senior was in the chair.

He shared many interesting resources and insights about general practice, Indigenous health and other matters, and I’ve tried to capture a few of the highlights below.

Meanwhile, Dr Ewen McPhee, a GP from Emerald in Central Queensland, is tweeting for @WePublicHealth this week.

He will report from Cairns and the World Summit on Rural Generalist Medicine and the Rural Medicine Australia 2013 conference, organised by the Rural Doctors Association of Australia and Australian College of Rural and Remote Medicine. Check the Twitter hashtag #RMA2013.

Senior  is a Senior Lecturer in the University of Western Sydney School of Medicine in General Practice and Indigenous Health, is Medical Advisor for the RACGP National Faculty of Aboriginal and Torres Strait Islander Health, and does clinical work at Tharawal Aboriginal Corporation, an Aboriginal Community Controlled Health Service

He spoke about the advantages of generalists for our health and healthcare systems (it may make more sense if you read each of the tweet grabs from the bottom up). 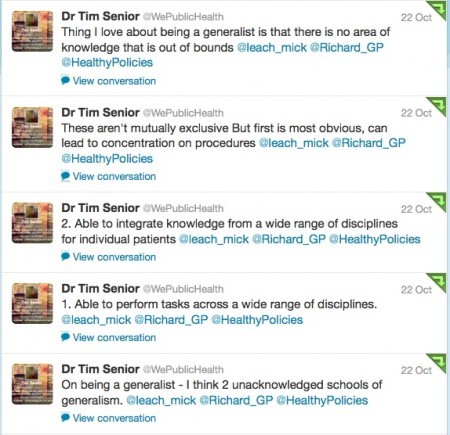 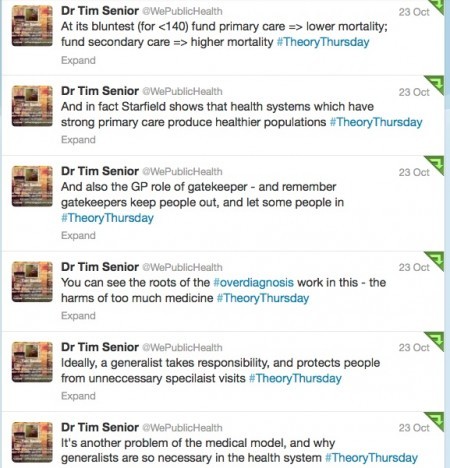 Senior described his approach to shared decision making with patients. 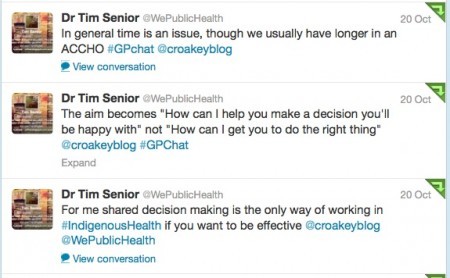 Some tips were shared for improving the examination of medical students in Indigenous health. 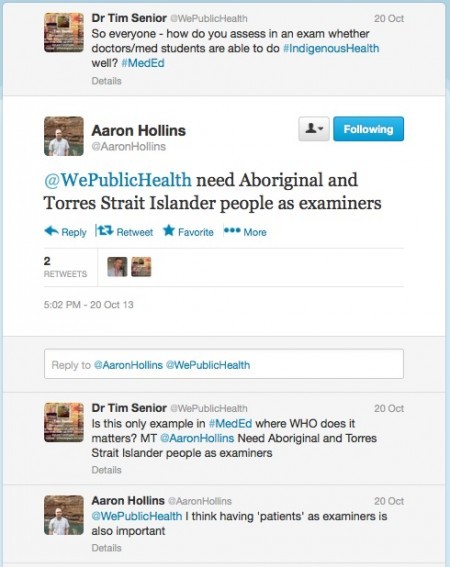 This is Senior’s favourite paper on breaking down cultural barriers in Indigenous Health, published in the Australian Journal of Rural Health in 2011, and titled: Cultural barriers to health care for Aboriginal and Torres Strait Islanders in Mount Isa.

The study, based on interviews with community members and health professionals, found Aboriginal patients and health practitioners had different understandings of cultural barriers. It concluded: 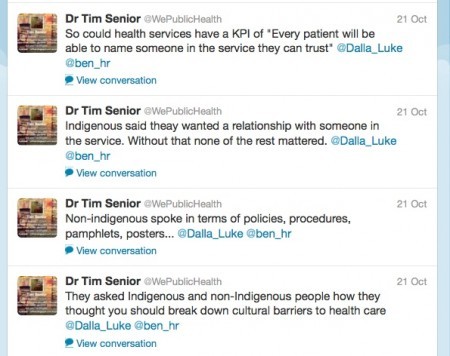 Senior described the holistic approach of the community controlled sector and what a difference a human rights-based approach makes to health. 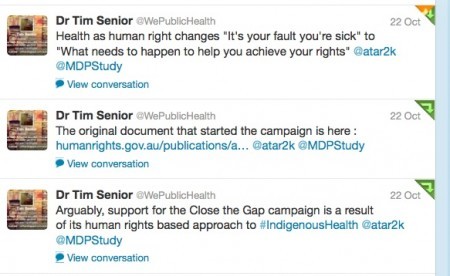 There was also a chat about the importance of self care, for health professionals and community members. 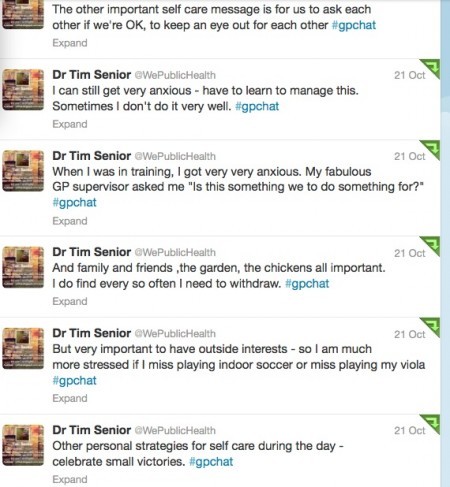 And here are the links to Keeping the Doctor Alive and First Do No Harm.

Senior wasn’t interviewed for this study about resilience in doctors working in challenging areas but did recognise himself in the discussions. The article, published in the British Journal of General Practice, says:

“If organisations want to increase the numbers of medical staff or increase the work commitment of staff in areas of social disadvantage, they should consider supporting doctors to work part-time, allowing experienced doctors to mentor them to model these patient-appreciative approaches, and reinforcing, for novice doctors, the personal and intellectual pleasures of working in these fields.”

Senior also shared quite a few resources around narrative-based healthcare and recommended: 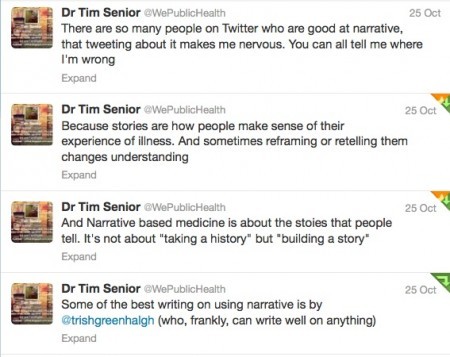 For an interesting take on what access to services in Australia would look like if there was no inverse care law, see this study, Access to general practitioner services amongst underserved Australians: a microsimulation study.

The authors developed a model to determine the distribution of GP services that would occur if all Australians had equal utilisation of health services relative to need.

It was estimated that those who are unemployed would experience a 19% increase in GP services. Persons residing in regional areas would receive about 5.7 million additional GP visits per year if they had the same access to care as Australians residing in major cities. This would be a 18% increase. There would be a 20% increase for inner regional residents and a 14% increase for residents of more remote regional areas. Overall there would be a 5% increase in GP visits nationally if those in regional areas had the same access to care as those in major cities. CONCLUSION: Parity is an insufficient goal and disadvantaged persons and underserved areas require greater access to health services than the well served metropolitan areas due to their greater poverty and poorer health status. Currently under-served Australians suffer a double disadvantage: poorer health and poorer access to health services.

Senior set aside a day of tweeting for #TheoryThursday.

We learnt about the BARD model (and much more…) 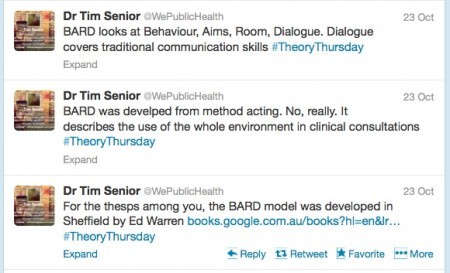 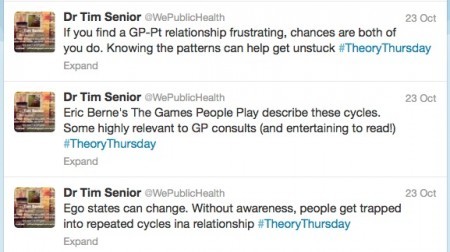 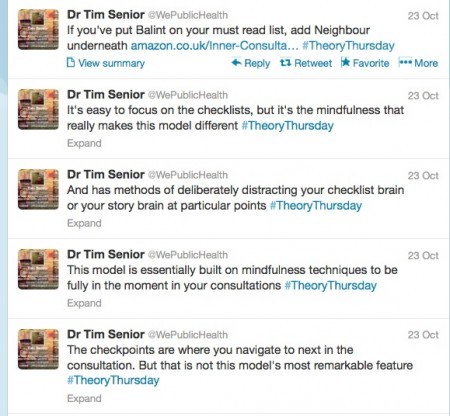 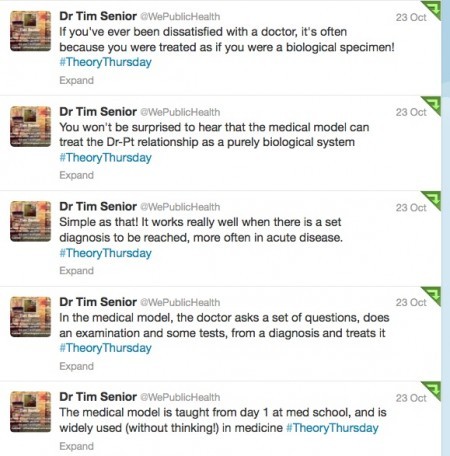 The flaws of the medical model were put under the Twitter-spotlight. 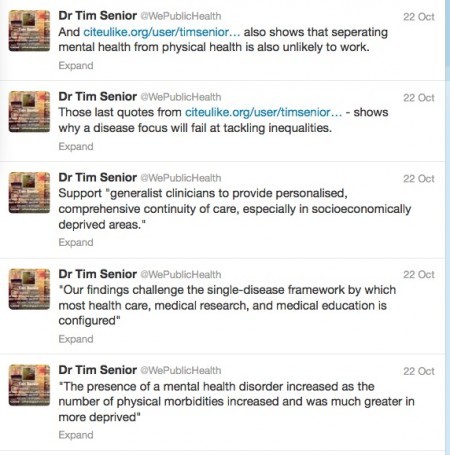 Senior shared the news that Wikipedia and Cochrane are working together.

After such an engaged, energetic week of tweeting, it is not surprising that @WePublicHealth gained many new followers, including…

PrevPreviousWhat are the health implications of the ever-widening gap between people and nature?
NextDon’t miss The Sunnyboy…coming soon to a screen near youNext