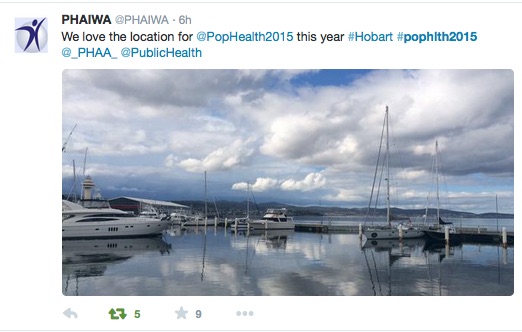 How much could Australia learn from the “inspirational” way of doing health in Wales?

It was a “tale of two countries” at the opening day of the Population Health Congress 2015, where a stark contrast emerged between ground-breaking legislation in Wales that “locks health prevention into the whole of government” and Australia’s cuts to prevention and health promotion.

Wales Chief Medical Officer Dr Ruth Hussey told delegates about her country’s Well-being of Future Generations Act, which was introduced in April and is reported to be the first law of its kind in the world.

It requires all public bodies to consider environment, health and social principles in every decision they make and will see the establishment of a Future Generations Commissioner for Wales, to speak on behalf of future generations. 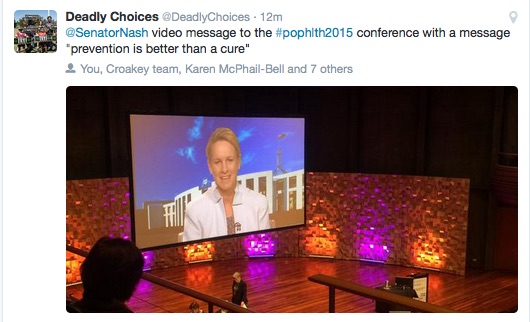 The example set by Wales stood in striking contrast to a video presentation from Assistant Health Minister Fiona Nash, whose comments on the importance of prevention rang hollow for an audience acutely conscious of the Government’s health cuts.

As the following tweets show, many in the audience noted the gap between the rhetoric and the Government’s actions. 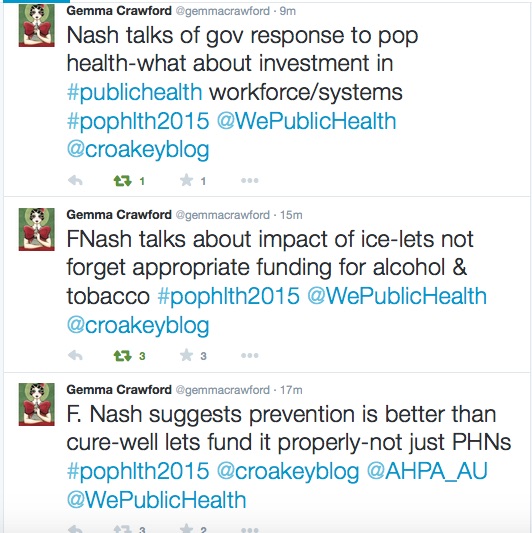 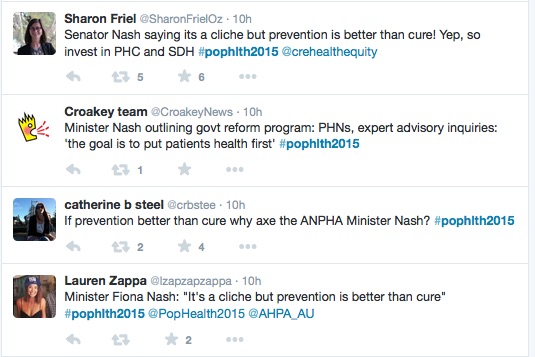 It was not only the Federal Government that came up lacking.

Former Disability Discrimination Commission Graeme Innes also put the 900 public health experts there on notice to address the “sea of discrimination” that people with disability swim in every day – particularly in health services.

Hussey said the Well-being of Future Generations Act requires public bodies and the government itself to pay regard to a number over-arching goals: namely to build a country that is prosperous, with a resilient environment, healthy people, equal opportunities and strong communities, while promoting the Welsh language.

“Public bodies are required to demonstrate a number of sustainable development principles in the way they work, of which prevention is key, and to work with the communities they serve,” she later told Croakey.

“What this does is move prevention from being a program on the side, and a separate idea, to really making sure that every pound of public spending is embedded in a preventive approach. This is much more holistic approach to addressing health of our generation now and future generations.”

With her keynote entitled ‘Putting the public back in public health’, Hussey talked about the role of ‘coproduction’ in Welsh health priorities as part of the emergence, as Scottish colleagues had described, of a ‘fifth wave in public health practice’ and through the development of Prudent Health Care principles.

She gave as one example a rapid response to a major outbreak of measles in the Welsh city of Swansea, which saw more than 1200 measles cases diagnosed and one death. Large numbers of children in the 10-18 year old age group had not been given the MMR vaccinate as babies, as a result of a scare that saw the local newspaper campaign against vaccination.

“We knew our response had to be different: not just messaging but engaging,” she said. The local health board launched social media campaigns like ‘Let’s knock the spots off measles’ that ultimately saw an additional 30,000 teenagers vaccinated, and queues on the street to do so.

“It was an example of really rapidly connecting with a key community,” she said.

Below are some of the tweets related to her talk. 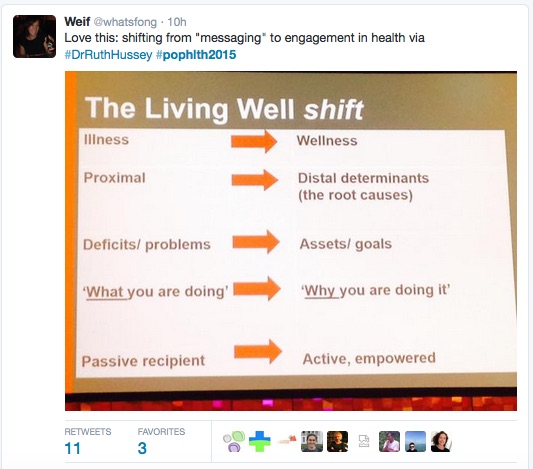 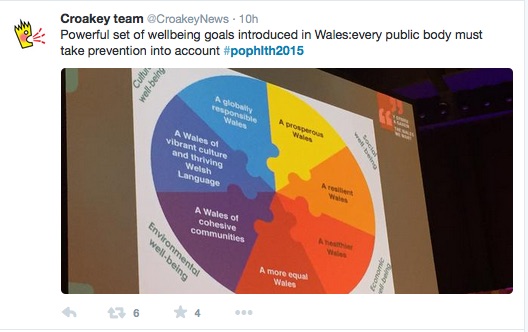 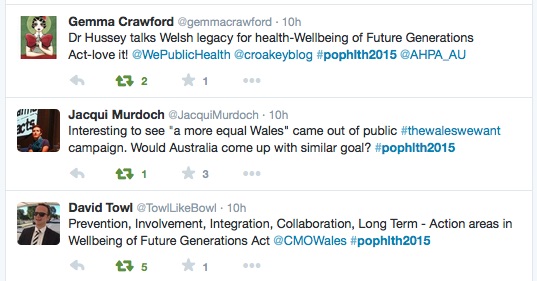 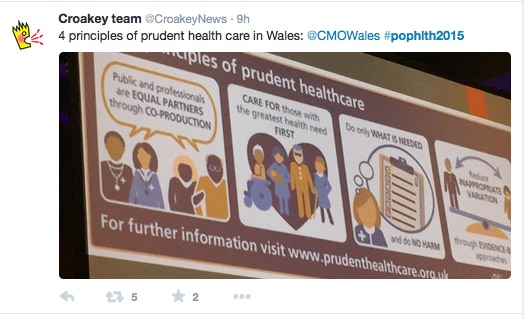 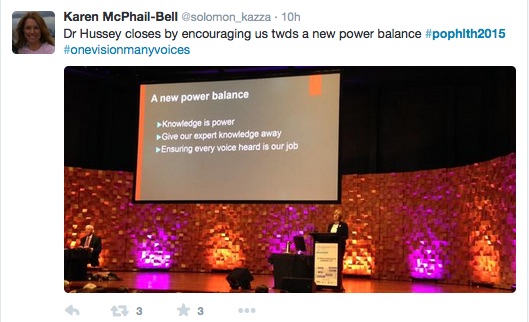 A sea of discrimination

Graeme Innes told the Congress that Australia could not hope to have a quality health system while 20 per cent of the population, those with disabilities, do not receive the same level, access or quality of care.

He told a recent story where his mother was hospitalised.

“The staff told me I’d need to stay with her because there seemed to be some level of dementia and she couldn’t understand staff instructions,” he said. “When I asked if they’d checked she was wearing her hearing aid, they hadn’t thought of that.”

He quoted one of his predecessors as saying: “People with disabilities swim in a sea of discrimination”. They also, he said, live with the “soft bigotry of low expectations”.

He talked about the “everyday” restrictions and barriers: the lack of adjustable couches for examinations in most GP surgeries, health and medical literature available only in print, including dosage instructions with medications, which made them inaccessible to people like him with print disabilities or to those with cognitive disabilities.

“How many times in a health promotion do you see a person with a disability?” he asked.

Innes said people with disability were already at a health disadvantage, but that was exacerbated if they were poor, Indigenous, or incarcerated.

He called on everyone in the room to recognise and shift the attitudes that are behind such disparities.

“We have to reimagine normal and ensure that our health system delivers for everyone, not just for the 80 per cent of people without disabilities.”

More tweets from day one

(Other articles from day one will be posted later at Croakey) 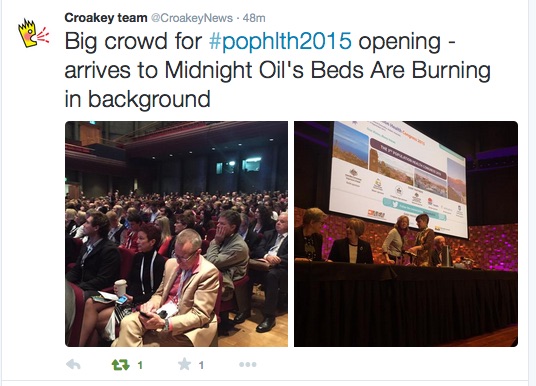 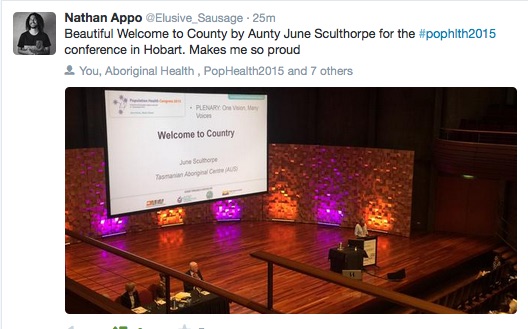 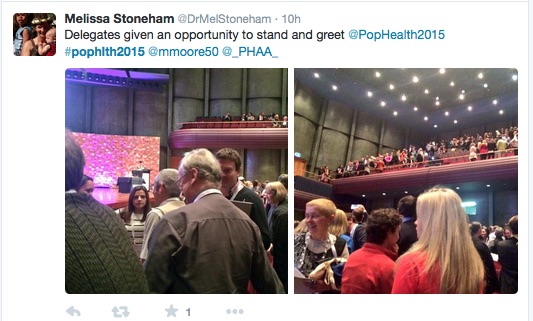 The energetic #pophlth2015 tweeps had the conference trending nationally. Read the Symplur transcript of Twitter coverage here, and below you can also see the analytics. 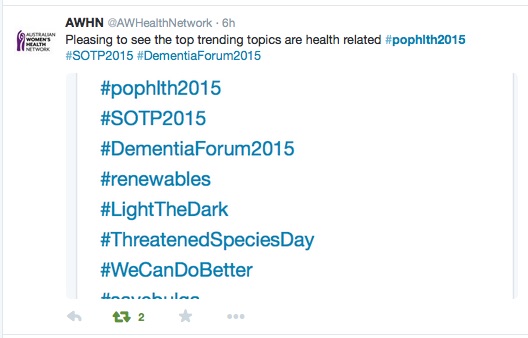 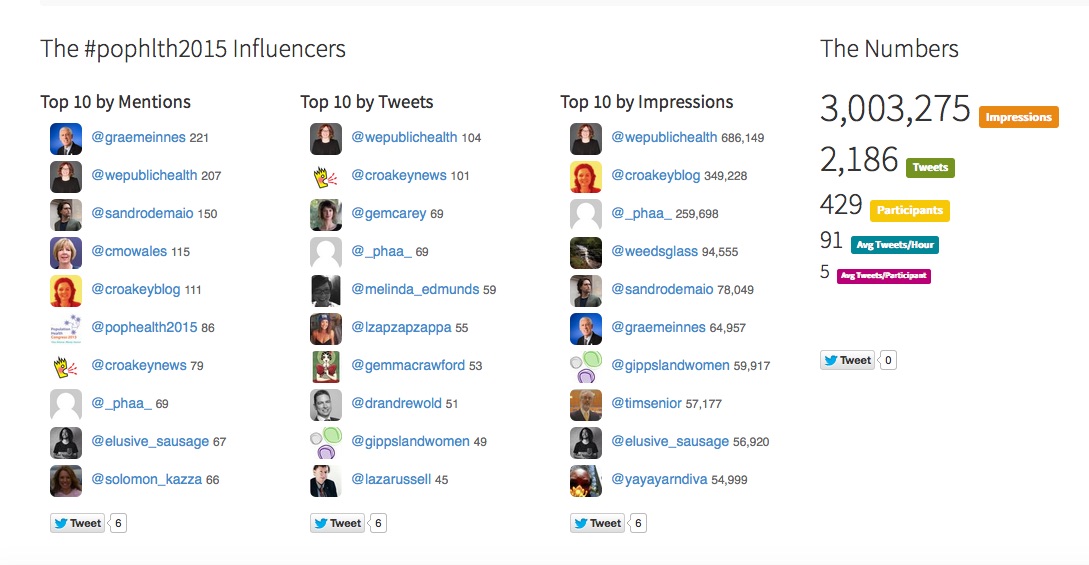 So, you know what to do…

PrevPreviousChallenges to the implementation of capitation payments for chronic illness
Next#OnHerTerms: a community campaign for RU 486 in the NTNext