How should Australia respond to the current COVID-19 wave?

At this event, the Minister announced that he has accepted advice from the Australian Technical Advisory Group on Immunisation (ATAGI) to make new COVID-19 vaccines available to eligible Australians.

ATAGI had decided not to recommend a fifth dose or a third booster at this point in time. “They have said that they anticipate new booster recommendations being made in early 2023 in preparation for the southern hemisphere winter,” Butler said.

In relation to the impact of this wave on Australia’s health system, Kelly predicted it would be “short and sharp” and said that while hospitalisations are rising, they are not doing so at levels that raise the Government’s concern.

The Minister stated that there was “no evidence” at the moment that would lead him to consider reinstating restrictions such as mask mandates, isolation, mandatory isolation periods and requirements that employees work from home.

This approach broadly reflects that of state and territory governments, none of which have moved to re-introduce restrictions in response to the current wave, although there have been some differences in the nuances of their response.

The only state to have formally changed its position in response to the current wave is Queensland, which has moved state’s traffic light COVID-19 advisory system from green to amber.

James Wood is Associate Professor, epidemiological modelling of infectious diseases, UNSW Sydney. Below he outlines his predictions for what Australia can expect from this wave and the lessons we can learn from Singapore’s recent experience.

Wood’s views on the fourth wave differ in some key areas from those of the Minister and Chief Medical Officer. He is more circumspect in his advice, noting the difficulty in measuring infection rates due to the removal of the requirement for testing and reporting.

He also suggests that compared to Singapore, Australia is likely to experience a longer wave (due to our more widely dispersed population) with higher numbers of cases and deaths (due to the relatively smaller proportion of people over 75 who have not previously been infected with COVID-19).

This piece was originally published in The Conversation and is re-posted here with permission. 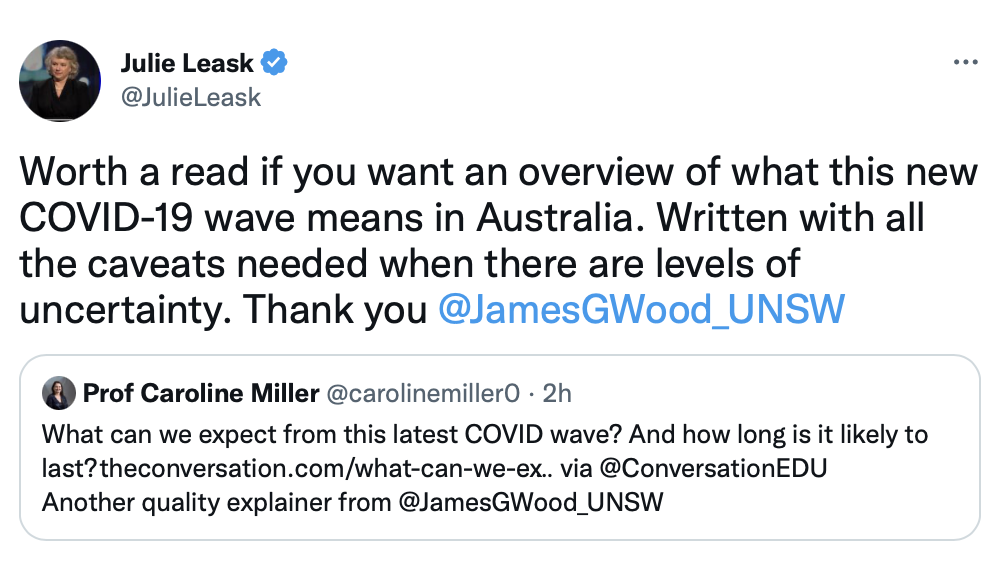 Australia is now mid-way into its fourth wave of COVID in the Omicron era, driven by a rich soup of Omicron descendants. Unlike previous waves, where a single new variant of SARS-CoV-2 variant such as BA.2 or BA.5 was responsible, we have had an explosion of new variants such as XBB.1, BQ.1.1 and BR.2.1. 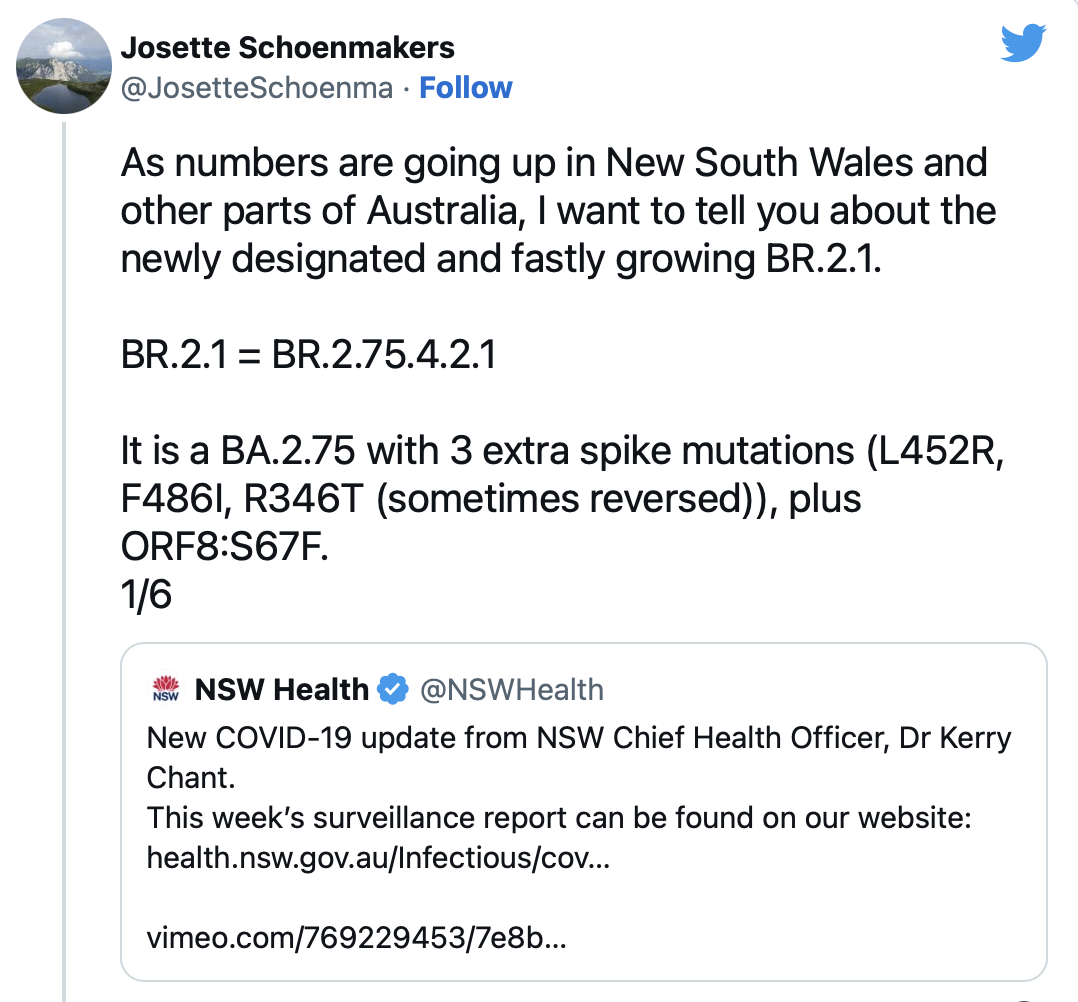 However, despite this apparent diversity, these new variants all follow a similar script, where the same set of changes have evolved independently across multiple variants. This is called convergent evolution.

These changes make the virus better at infecting people with immunity to existing variants. Since mid-October, the subvariants’ ability to escape immunity from vaccination and/or previous infection has been potent enough to cause a new wave in Australia.

The graph below shows the series of 2022 waves, with the original Omicron the first wave, followed by the double-bump BA.2 (where Western Australia had different timing), the winter BA.5 wave, and now a new upswing in November. 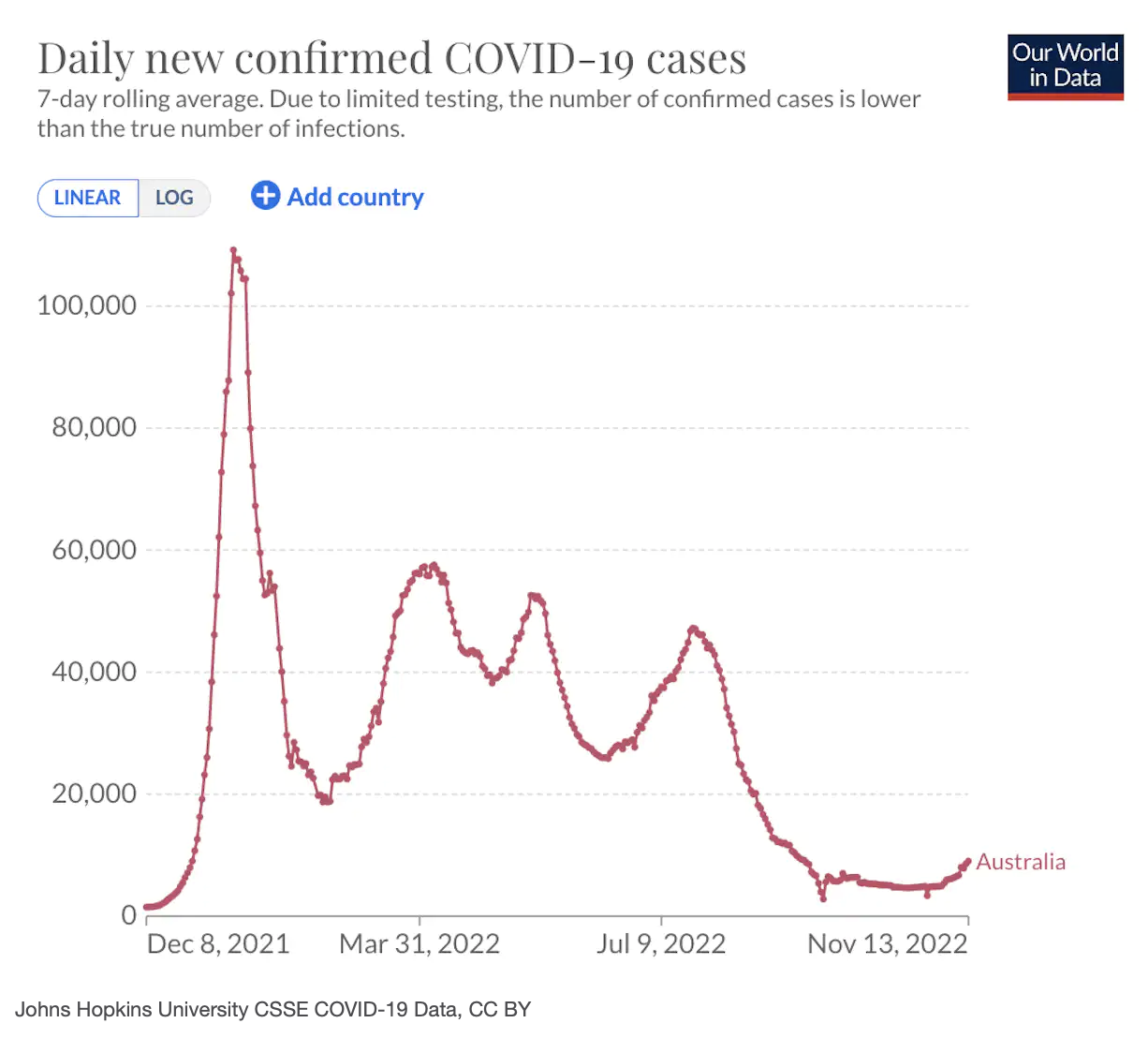 In some good news, this wave is likely to be a shorter and smaller version of the BA.5 wave. Here’s why.

In Australia, the wave is already growing rapidly, with indicators such as recorded cases and hospital occupancy showing significant increases in multiple states over the last two weeks.

New South Wales reports on the trend in the underlying variants, with a clear shift since early October.

Removal of mandatory reporting and isolation has led to fewer rapid antigen tests (RATs) being reported. So we may only be recording a smaller fraction of all community infections now than in previous waves.

In the graph below, I’ve used the EpiNow2 R package (an open-source estimation and forecasting tool) to calculate the trend in the effective reproduction number (Rt) using NSW case data since early September.

Rt represents the average number of people that a single COVID case infects at a given point in time. Epidemics decline when Rt is less than 1, while epidemic growth becomes likely once Rt is above 1 and is increasingly steep as Rt rises. This is now substantially above 1 in New South Wales: 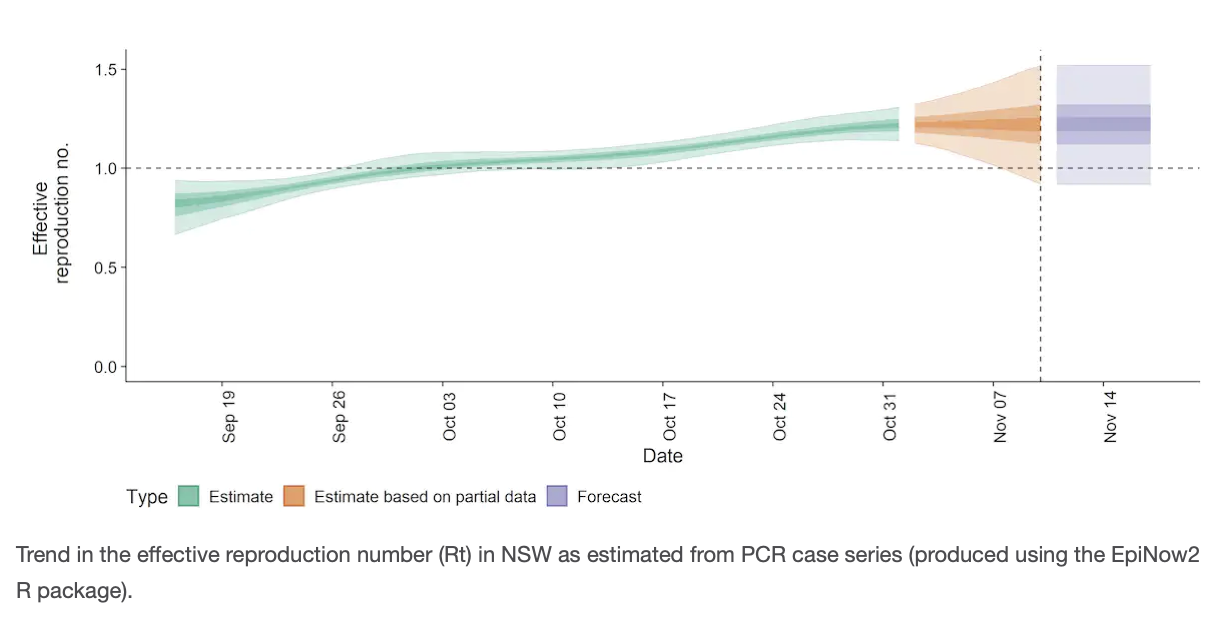 I think the most likely outcome is the wave will peak by Christmas. In my own work for NSW Health, I am currently projecting a peak in NSW for the first week of December.

But these predictions are uncertain because it is still difficult to estimate the level of protection against infection in our population, despite impressive near real-time laboratory science that is helping to characterise this.

Fortunately, despite the challenges with modelling, the recent Singapore wave can guide our expectations. Caused by XBB.1, this wave was short and sharp, peaking around October 18 and then dropping back almost to pre-wave levels by November 12.

Singapore has also seen a significant increase in hospitalisations, primarily in people aged above 70.

However cumulative cases, admissions and deaths are tracking to be about half those of their BA.5 wave, with no signs of increased severity.

Despite the ability of XBB.1 to evade vaccination and/or previous infection, in Singapore people with prior Omicron infections were about 75% less likely to test positive in this wave than in people without recorded prior infections.

Singapore has also had quite a similar COVID pandemic experience to Australia in terms of restrictions, vaccination and infection waves. One exception is that mask-wearing remains more prevalent in Singapore.

We should, however, expect some differences. Australia has about six times the resident population of Singapore with widely separated population centres. This might mean the wave duration across Australia is one to two weeks longer.

Australia also has a higher proportion of the population above 75, a large fraction of whom haven’t had COVID this year and therefore won’t have hybrid immunity (from both vaccination and prior infection). This could result in more hospital admissions and deaths per capita than in Singapore.

But in general, the Singapore wave supports the prediction this fourth Australian wave of 2022 will peak in early December and fall back below current levels by Christmas.

Beyond this year, I’m encouraged by the shift in pattern from single variants causing waves to the evolving variant soup. This evolution has been very rapid recently but there are signs this may slow considerably in 2023.

Firstly, the rate at which mutations occur is proportional to how much virus is circulating. The enormous number of COVID infections across this year mean that in 2022 this change has happened quickly but with each wave getting smaller, this rate of change should slow.

The recent variant soup evolution may also be a positive sign. The different variants in the soup have all gained a transmission advantage following the same immune-escape strategy. The set of relevant mutations were in fact predicted in advance by researchers at the University of Washington.

If you are infected with one of these new variants, you should also have strong protection to the rest of the soup. The absence of big mutational jumps in dominant variants suggests SARS-CoV2, the virus that causes COVID, may now be entering a period of slower, more continuous evolution. This is what we see for seasonal influenza.

COVID has been full of surprises but the evidence suggests we could see SARS-CoV-2 infections fall below our recent trough levels in 2023 and the beginning of a more seasonal pattern to COVID waves.

See here for Croakey’s archive of stories on COVID-19.

PrevPreviousOn healing, the climate and a focus on solutions
NextWill ‘loss and damage’ remain unpaid at COP27?Next