How the arts contributed “substance and soul” to #ruralhealthconf

Shadow Assistant Minister for Health, Stephen Jones, got it right at the closing session of #ruralhealthconf when he described it as having ‘both substance and soul’.

From Shellie Morris’s rousing performance at the opening ceremony to the closing dance from the Kailani Dancers, much of the ‘soul’ of the conference was due to the thoughtful way in which the arts and cultural activities were integrated into the program to add another dimension to the information provided in the plenary and concurrent sessions.

The following article explores the ways in which the diverse and engaging arts program worked to enhance both the ‘substance and soul’ of #ruralhealthconf.

By creating a sense of community and shared experience: conferences are all about building relationships but it can be tricky to throw hundreds of people together for three intense days of discussion and debate and expect the bonding just to happen.

The arts and cultural activities at #ruralhealthconf helped the event become more than just 800 delegates sharing a space for three days. They brought people together and created a sense of community over the course of the event, solidifying existing friendships and creating new ones. Nothing breaks the ice like fumbling together through swing dancing 101 or sitting side-by-side on the floor comparing questionable efforts at weaving a fish trap out of pandanus! 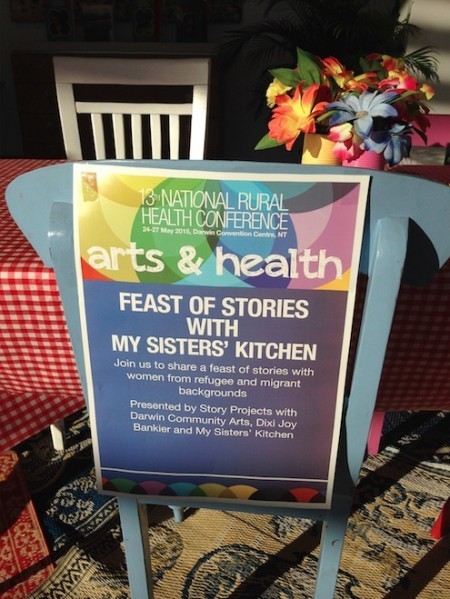 By engaging delegates with other senses: with so many speakers, presentations, posters and plenaries to take in, the information overload can be intense. The conference was also engaging other senses through music, dance and taste. Listening to the story of a refugee woman from Burma while sampling a tradition dish she had prepared, at the My Sister’s Kitchen installation powerfully reinforced the messages from many other sessions about the important relationship between health and community, relationships, culture and language.

Through creating spaces for reflection and rejuvenation: despite the many success stories in rural health, there is still an unacceptable level of injustice and inequality in the health status of people in rural areas compared with those in cities.  It is important to keep reminding ourselves of this fact but it can be tough to hear – again and again – about diseases like trachoma which are virtually unknown in mainstream Australia but still cause vision loss and blindness in Indigenous communities (94% of which is preventable).  The beautiful music supplied by talented local musicians (such as Rayella) and the visual arts exhibitions in the communal areas created spaces for delegates to reflect on the difficult facts about injustice and inequality in the rural health sector without feeling overwhelmed by them.

By providing transitions in and out of sessions: moving delegates in and out of multiple concurrent sessions, from plenaries to coffee stations, through the trade exhibition and back out again, often in under thirty minutes, is a major logistical effort.  The music, dance and drama performances during transition times helped linked the sessions with the breaks, and made them a fun and engaging part of the conference.

Through linking delegates to the environment: it’s so easy at conferences for delegates to be so busy shuttling between their hotels to conference venues and back again that they never actually get out to experience the local environment.  At #ruralhealthconf Larrakia Nation did an amazing job of bringing local Indigenous culture into the conference through art, music and performance.  This reduced the sense of isolation and enabled delegates to learn about local culture and the unique environment of Darwin while still participating in the conference. 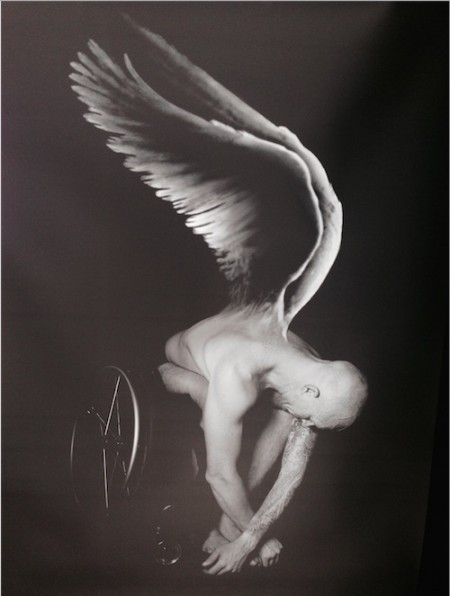 By finding alternatives to words: while there was an impressive line-up of eloquent and knowledgeable speakers at #ruralhealthconf, there are times when images are more evocatively and memorably expressive than words.  It’s a fair bet that long after the details of the facts and figures from the presentations have faded from memory, delegates will recall the aspects of the arts program that resonated with them.  A stand-out for many attendees was Sue Murray’s ‘Imagine Me’ photography project, with a number of arresting images of people in wheelchairs, including ‘Brett’.

By sharing and celebrating the many talents of rural health workers: as anyone who has dealt with the rural health sector knows, people working in rural health are multi-talented and multi-skilled.  While many of the delegates presented aspects of their work and research in the plenary and concurrent sessions, the photography and poetry exhibitions gave them an opportunity to showcase their artistic abilities and respond to their life and work in rural areas in another way. Even the Alliance staff got to display their dramatic talent by performing a vignette urging delegates to engage with the conference recommendations via the Sharing Shed.

By enabling delegates to take something home: also popular at #ruralhealthconf were the many stalls, markets and other opportunities for delegates to take some of the conference experience home with them, in the form of music, art or other local products. Lip balms, soaps and lotions, made using local plants were purchased by many delegates in the trade exhibition and the CDs of the artists performing at the conference were so popular that some completely sold out. The pop-up markets did a steady trade in silk clothing, hand-made textiles and gifts and some collector’s quality photographs and paintings from well-known local artists are currently heading south, courtesy of the charity auction, which raised money for the Miriam Rose foundation.

Through bridging the gap between health programs and communities: many health and social policies are designed by people in cities a long way – both geographically and culturally – from remote communities.  The arts can be one way to bridge the gap between these two worlds.  In her plenary presentation, Kathy Burns from Barkly Regional Arts described how conversation plates were being used to open up communication between Indigenous communities in the Kimberley about the National Disability Insurance Scheme.  The plates – some of which were exhibited at the conference – provided a way for people from these communities to communicate their feelings about disability and the NDIS.  This is vital as some of the communities speak Indigenous languages which have – literally – no words for disability.  The role of arts in communicating difficult topics about health and medical issues was also evident in the performance of ‘Gift of Life’ a play commissioned and produced by Artback NT in collaboration with Donate Life NT focussing on organ donation.

Another great example of the role of the arts in enabling rural communities to have ownership of health promotion programs was in the music videos presented by Red Dust Role Models.  This organisation works with rural communities to produce original songs and videos based on health priorities and key messages defined by the communities themselves.  The music videos they presented, such as ‘Blood Brothers’ on healthy eating and ‘Colours of my Country’ on eye health, were impressive examples of how to go beyond tokenistic ‘consultation’ to genuine engagement with communities in health promotion activities.   Also showcased was the ‘Who we are in Charleville’ song by Josh Arnold/Small Town Culture which beautifully celebrated the uniqueness of the Charleville community and captured the creativity and vibrancy of the people who live there.

While #ruralhealtconf may be over for another two years, the arts and cultural program will help ensure that its impact continues in the lives and work of delegates and those who were able to access the conference online via Twitter.

Also ensuring the conference will continue to influence the national health agenda will be the recommendations developed by delegates via online and face-to-face forums.  These can be viewed at the Sharing Shed and will be used as the basis of lobbying and advocacy materials by the National Rural Health Alliance and other groups over the next two years. They will be covered at Croakey in a later article.

Meantime, participants were also active in creating #ruralhealthconf artefacts on Twitter, including via the ever-popular “selfies”. 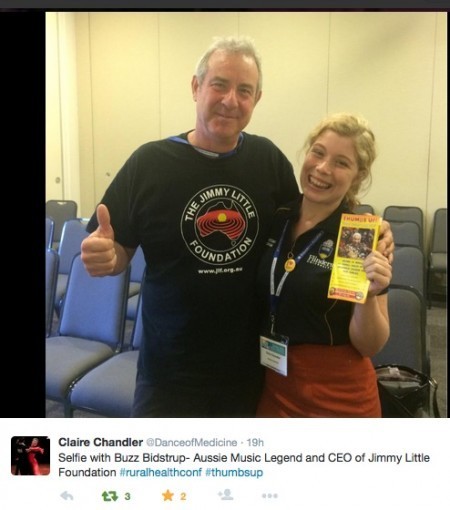 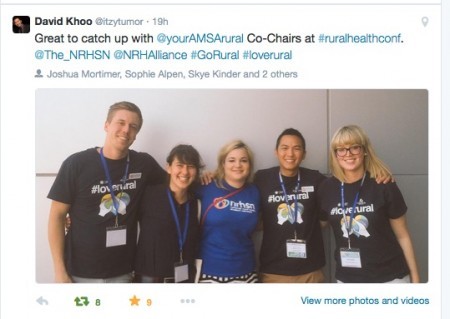 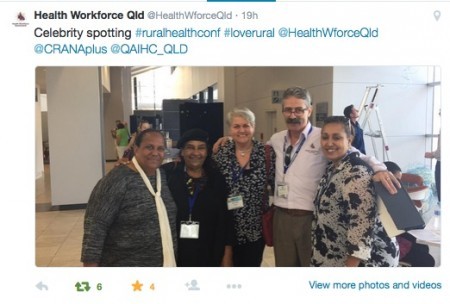 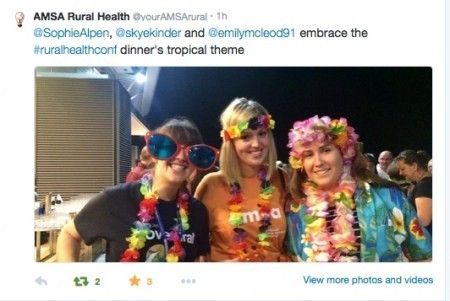 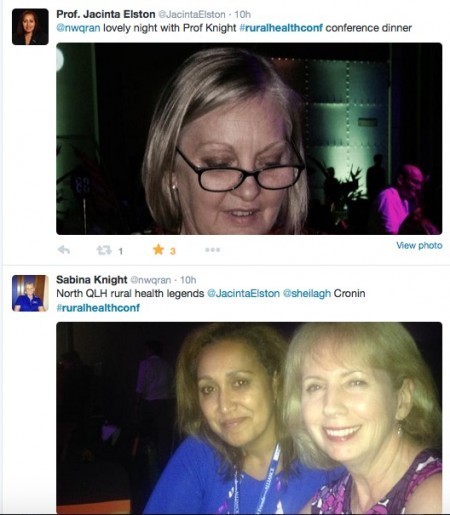 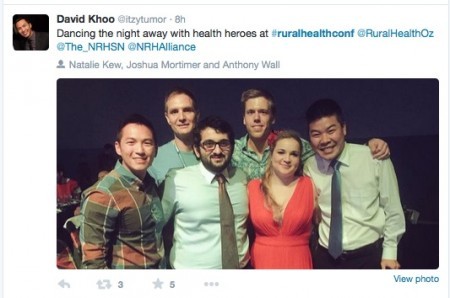 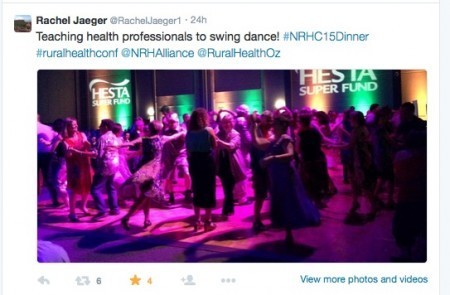 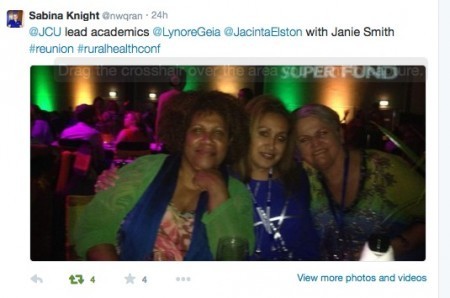 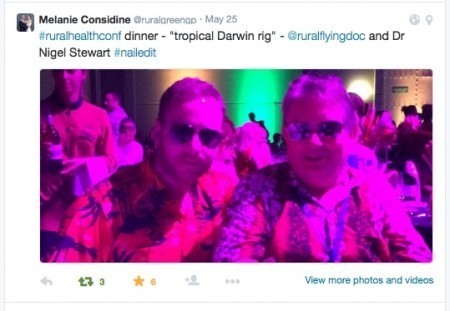 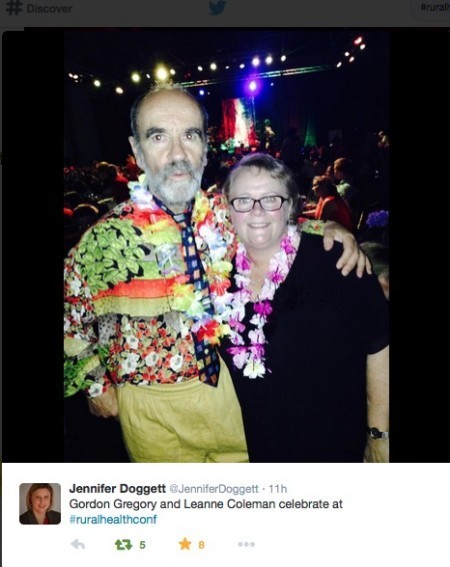 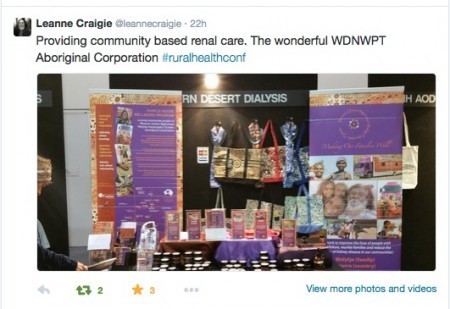 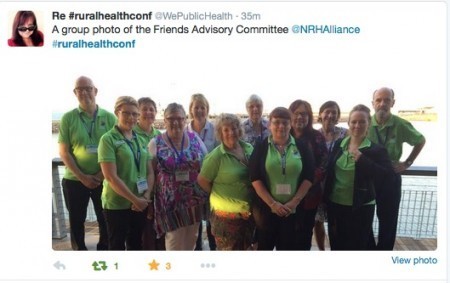 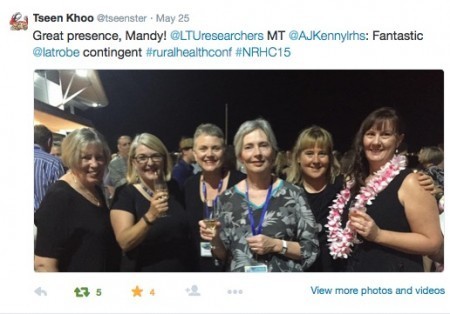 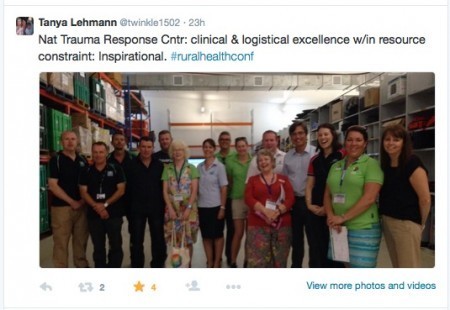 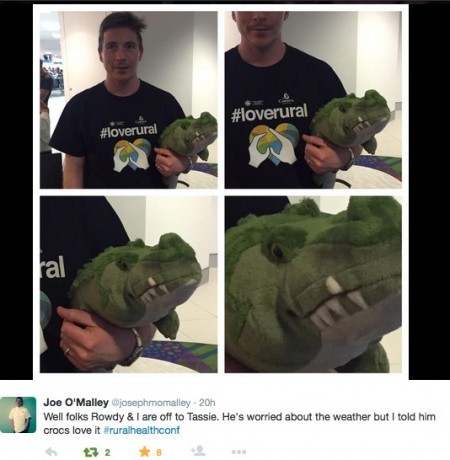 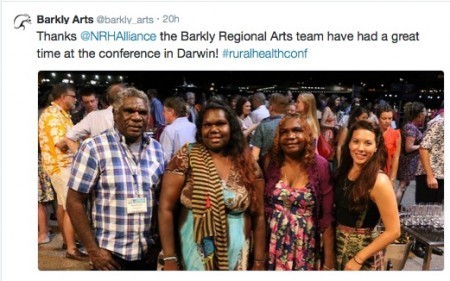 PrevPreviousWe can cut Indigenous smoking and save lives – here’s how
NextClimate change: a great threat to health, but not as generally conceivedNext