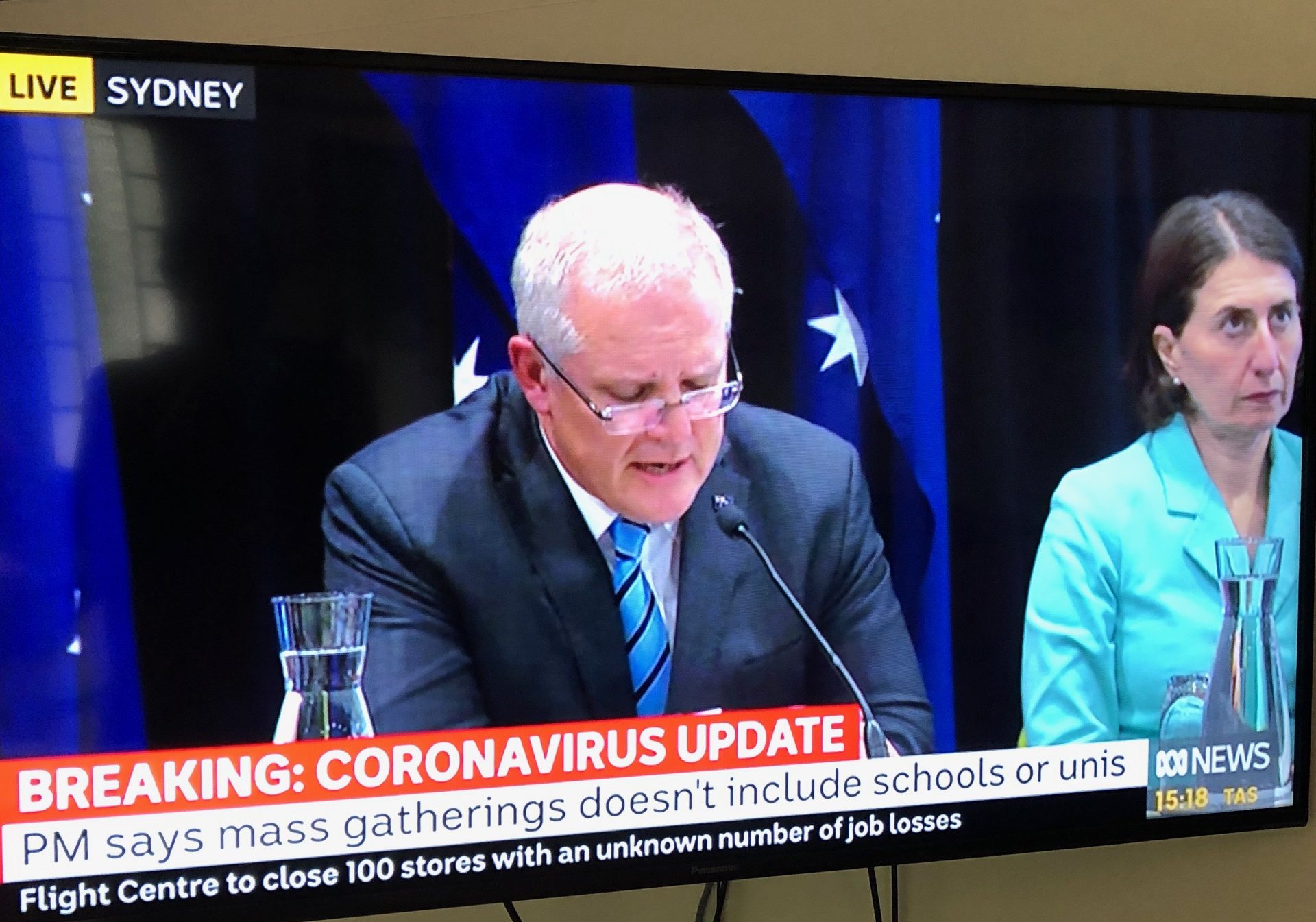 How the coronavirus story is unfolding, by the day and week…

This article was first published on March 13, 2020

Introduction by Croakey: Federal, state and territory governments have formed a National Cabinet with the goal of ensuring a consistent, coordinated response to the novel coronavirus pandemic. It will be advised by the Australian Health Protection Principal Committee (AHPPC).

The National Cabinet will meet on Sunday to consider implementation of today’s announcement that from Monday, all non-essential organised gatherings of 500 people or more should be cancelled.

Speaking after today’s Council of Australian Governments (COAG) meeting, Prime Minister Scott Morrison said this advice would not apply to universities or schools, and also advised Australians against making non-essential overseas travel. After making the announcement, Morrison confirmed that he planned to attend a football game this weekend.

However, his attempts to reassure Australians they could generally proceed with life as usual were undermined by the news a few hours later that Home Affairs Minister Peter Dutton has the coronavirus. The PM subsequently cancelled his football plans.

The Australian Government’s Chief Medical Officer, Professor Brendan Murphy, told the press conference (watch here) there was now early evidence of transmission of the coronavirus in the Australian community (see the latest figures on Australian cases here), with international evidence suggesting that large events could help spread the virus rapidly once some community transmission was established.

According to COAG’s 13 March communiqué,  governments have agreed to commission real-time, transparent protocols, underpinned by advice from the AHPPC and working through the National Coordination Mechanism, to support consistent approaches in coronavirus preparation and containment. These protocols will include management of mass gatherings, school closures, health management in remote communities and public transport, with decisions on applying the protocols resting with states and territories.

The AHPPC has developed a risk‑based decision-making tool for mass gatherings (as reported previously at Croakey, one from Canada is already available).

Governments also today signed a new National Partnership Agreement on COVID-19 Response, which is a 50-50 shared funding deal between the Commonwealth and the states and territories. The Commonwealth will make three sets of payments under this agreement:

The COAG announcements followed a last-minute decision to cancel the Grand Prix in Melbourne, which doctors – including ABC’s Dr Normal Swan – had been urging.

Meanwhile, Denmark is closing all schools and universities and will start sending home all employees in the public sector with non-critical jobs, Ireland is closing schools, colleges, childcare facilities and cultural institutions, while other European countries are taking similar measures, including closing cinemas.

With news about the novel coronavirus developing so quickly, a lot can happen in 24-hours, let alone a week. In the article below, emergency medicine physician Dr Simon Judkins, summarises his time guest tweeting at @WePublicHealth last week. And for more medical commentary on the latest coronavirus news, check this transcript of comments by the Australian Medical Association federal president and councillors.

It was a hell of a week. We saw the big issue of COVID-19 play out in the media, both mainstream and social, with stories ranging from the mass hysteria brought on by a fear of running out of toilet paper, to common sense and pragmatic (via Professor Allen Cheng), to plainly stupid.

At this point, many questions remain unanswered. And that will continue as we learn more about the nature of the virus, its spread, and its incubation period. But a few have been debated and answered.

For example, “Does Australia have the “surge capacity in its health systems to manage an outbreak?”

Clearly, the thoughts amongst those who work in the system are pretty clear, including yours truly (Australian doctors warn of overwhelmed public health system in event of coronavirus pandemic), and one wonders what we have or haven’t learnt from previous viral pandemics.

We clearly don’t have extra beds, wards or hospitals to open and we do not have staff waiting to come into work. In fact, the way our health system runs is built on having queues.

Health policy makers and health economists will tell you that we can’t run a health system without lines and waiting times; the costs would be too great.

However, from where I sit as an emergency physician, this situation in our emergency departments contributes to poor patient outcomes, increases mortality and clinician burn-out.

So, today, the way we will increase “surge capacity” is to take it from somewhere else, meaning we will cancel elective surgery and outpatients (and try to catch up later, which may be a challenge (and try, by slowing the progress of the virus through community, manage the pressures on the system.

If we can flatten the surge, we will, in some way, manage the risk.

There is a general consensus that Australia’s health systems will manage this outbreak well. However, is this through good preparation, good management or good luck?

Depending on who you talk to, the opinions will vary. Our politicians will tell us it’s due to investment in a system which can cope, but we all know that’s not the case.

Our Department of Health and Human Services staff and health administrators will, I think, favour the good management line, whereas the frontline workers will tell you it’s been due to their hard work and a bit of luck.

Although it’s a bit of each, the preparation and investment is the one I would disagree with most. What we have seen is a scramble to get this right.

But we will adapt, innovate and borrow ideas from overseas to ensure people are cared for and safe.

And, it’s our long-term under-investment in preparation and prevention which has been the major contributor to this mad scramble.

Our public health systems have been parred back over years, with a move to cost mitigation through a business model and a desire to privatise as much as possible. Private industry will not manage a viral pandemic, unless there is a buck to be made.

Look at the United States to see what I mean.

What else is happening while CV-19 dominates the media?

Our mental health systems are again (again? …always) in the spotlight, with stories from the ACT about the dire straits of MH care there.

One has to wonder if the dollars spent on COVID-19 –which seem to have been taken from the Bushfire recovery fund, which doesn’t exist – which will impact the surplus, will now see all the recommendations from the Royal Commission in Victoria and similar initiatives across the country again thrown aside because of lack of money.

Which, of course, will further impact the bushfire recovery as mental health support is one area which needs investment for that recovery.

Lastly, we saw the celebration and recognition of women across the globe on International Women’s Day.

This has been largely overshadowed in news by COVID-19, but deserves special mention.

In my field of expertise and work, health and hospitals, there is no doubt that seeing more women advancing into leadership and senior decision-making roles will provide better healthcare outcomes and a more caring, more inclusive and more patient-focussed healthcare system.

It’s a change which has to happen, is happening slowly, but still much more to do.

And unlike the PM, I support, look forward to and welcome “the rise of women” as it has to better than the cluster f*** middle-aged white guys have got us into. 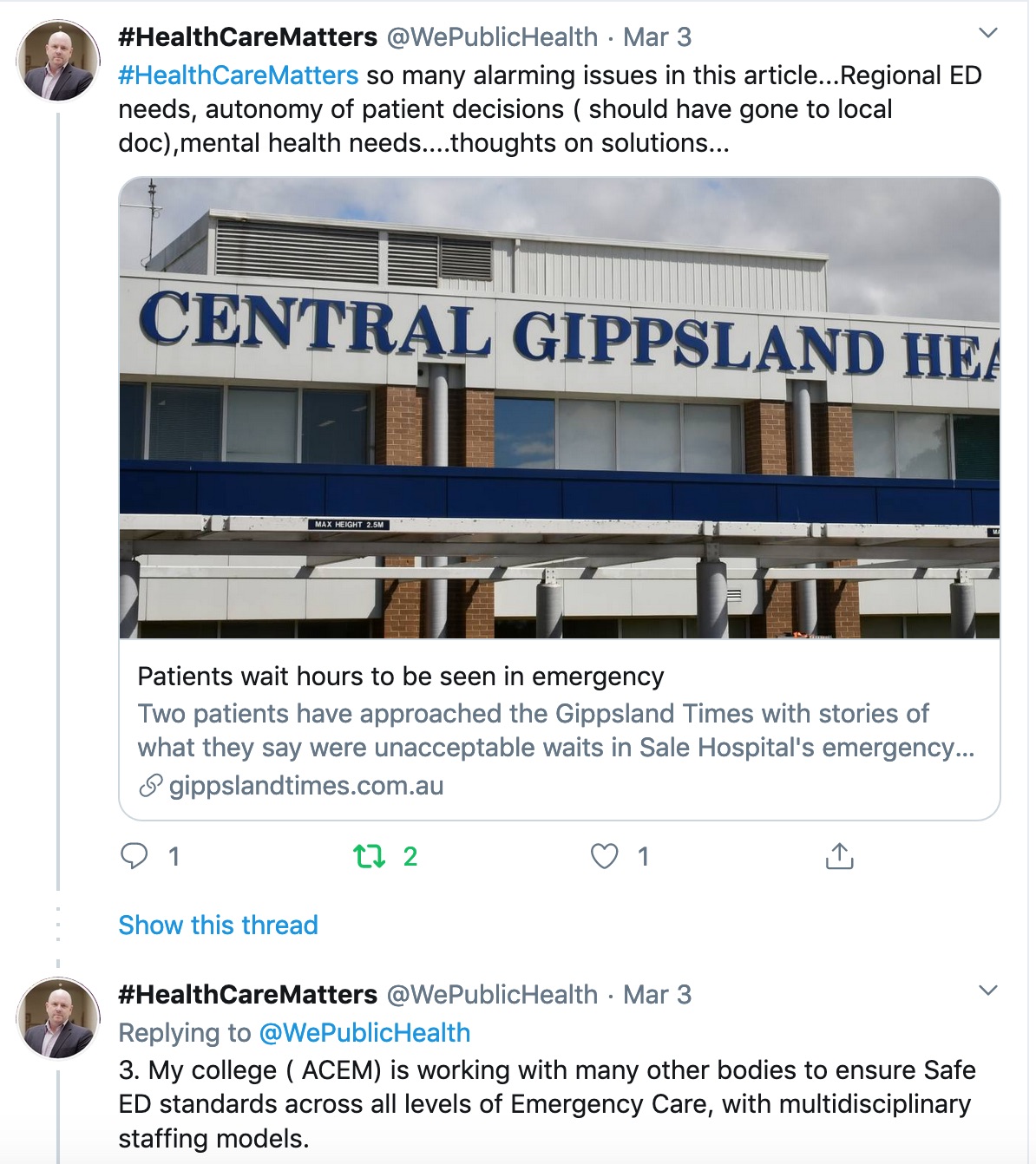 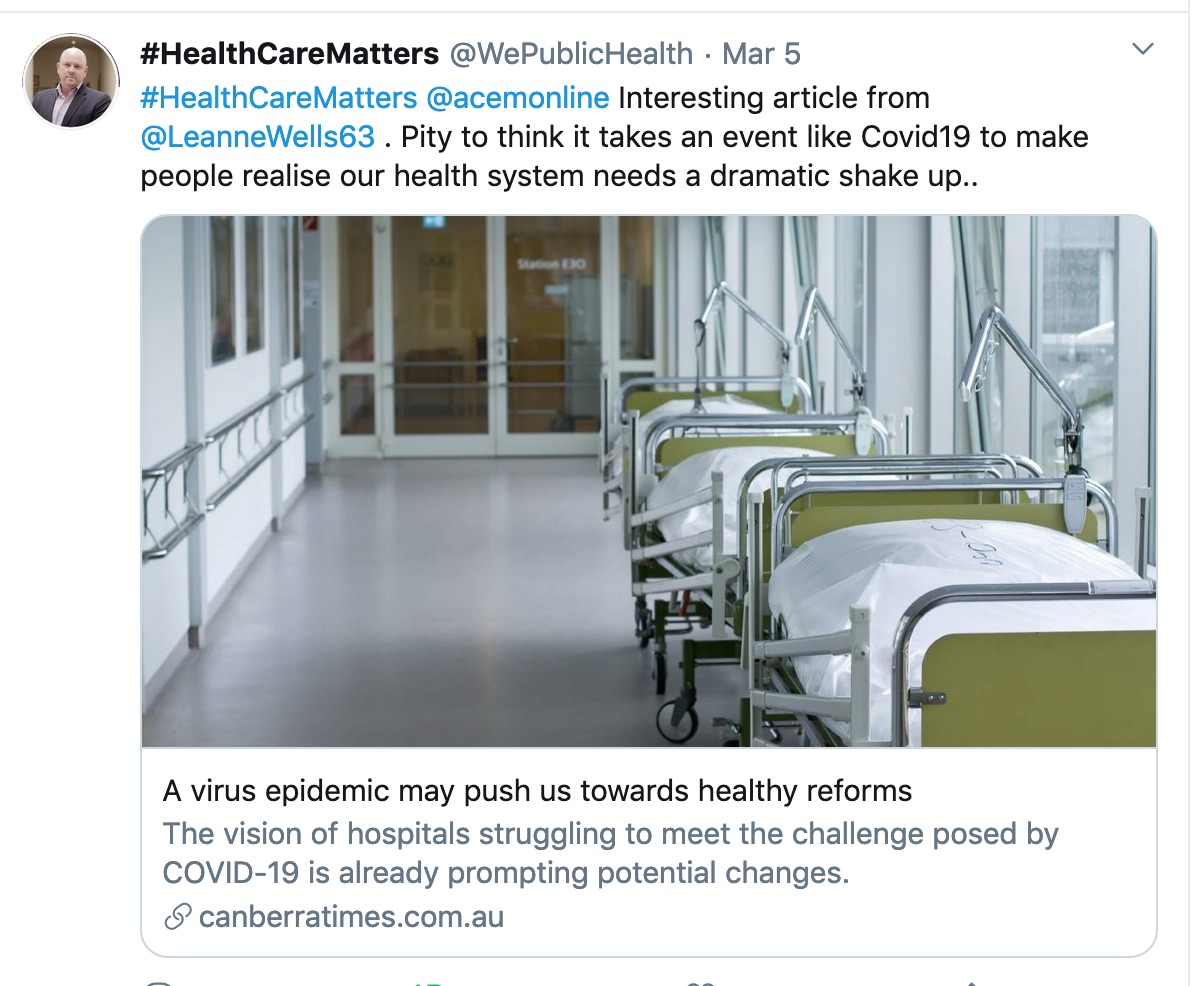 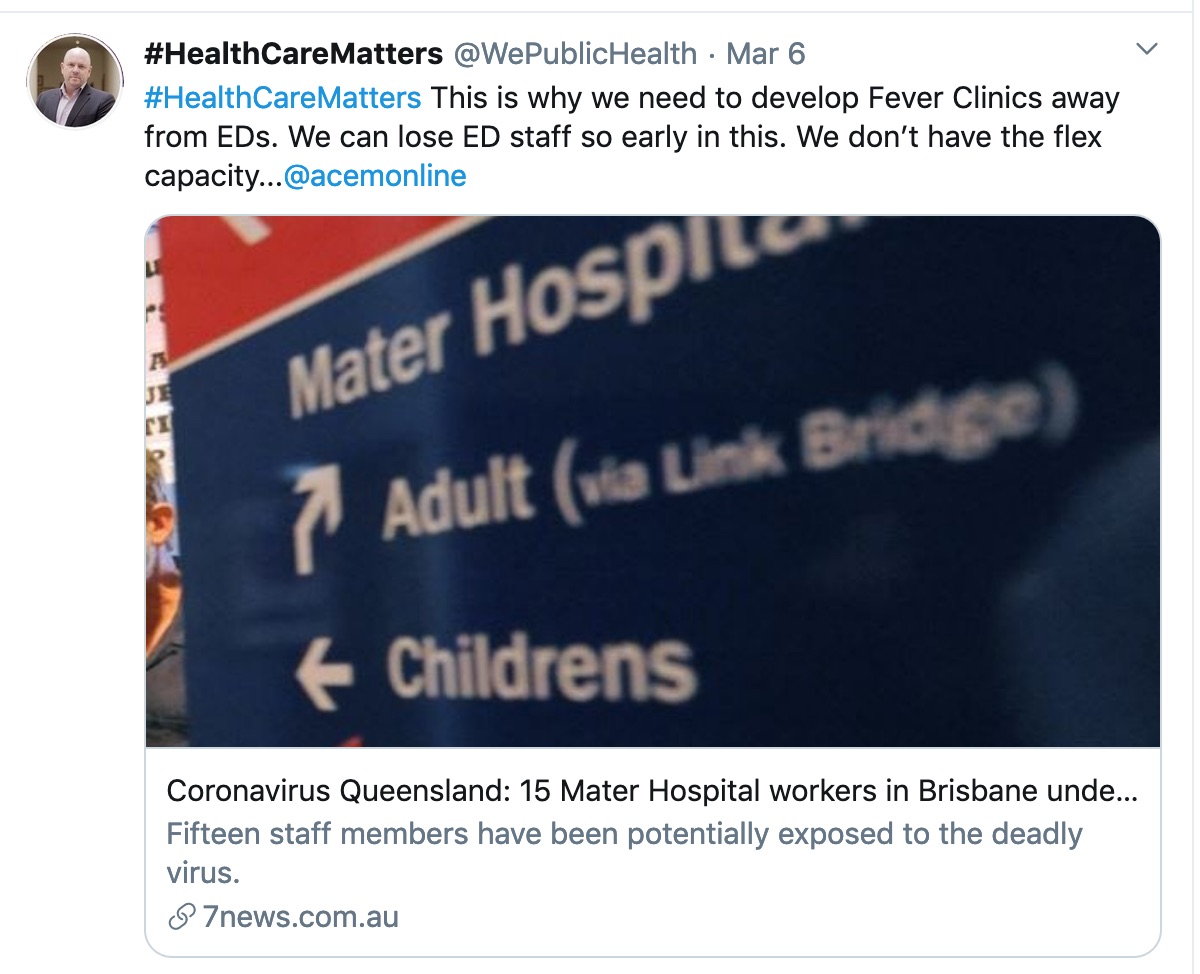 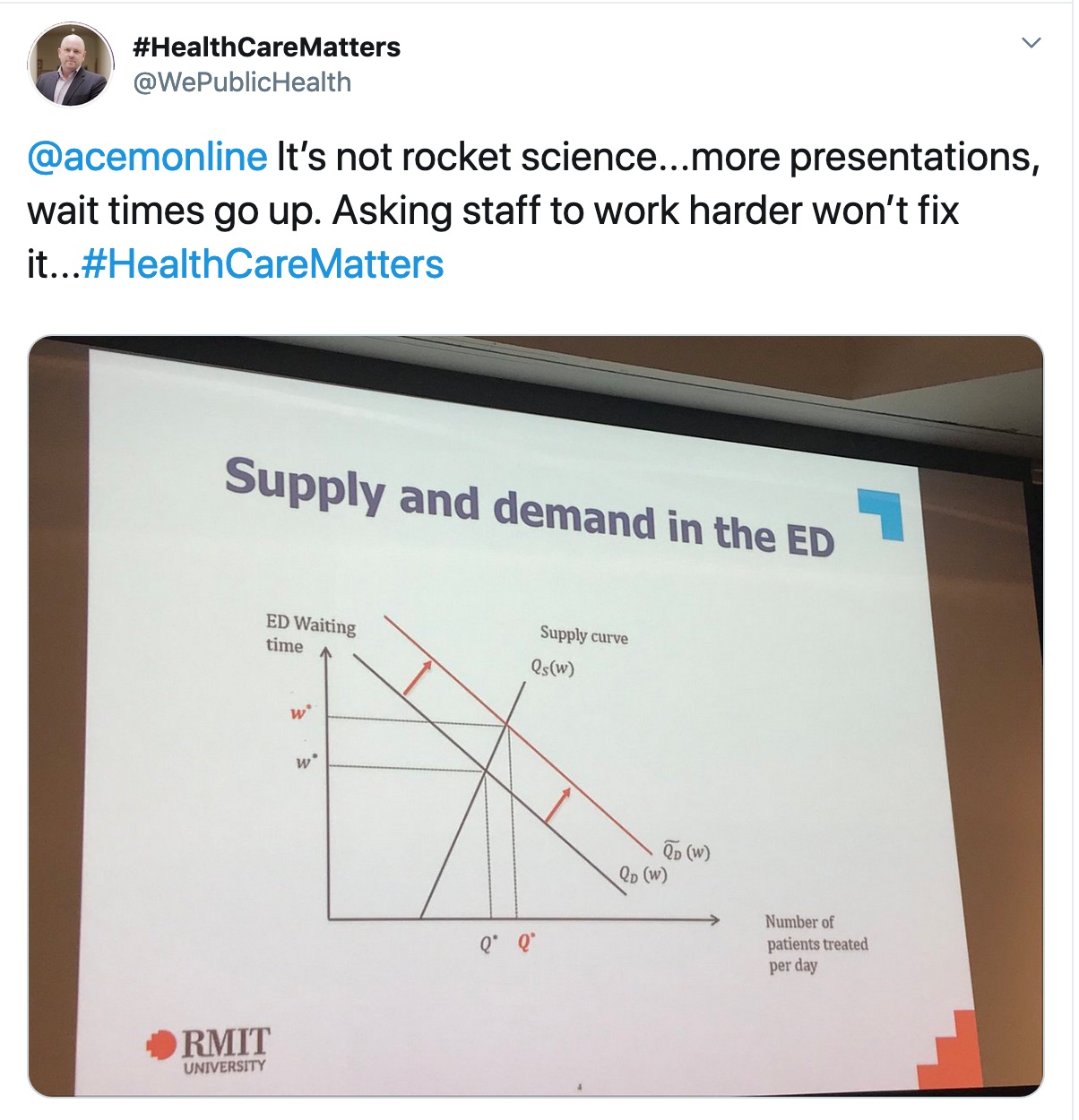 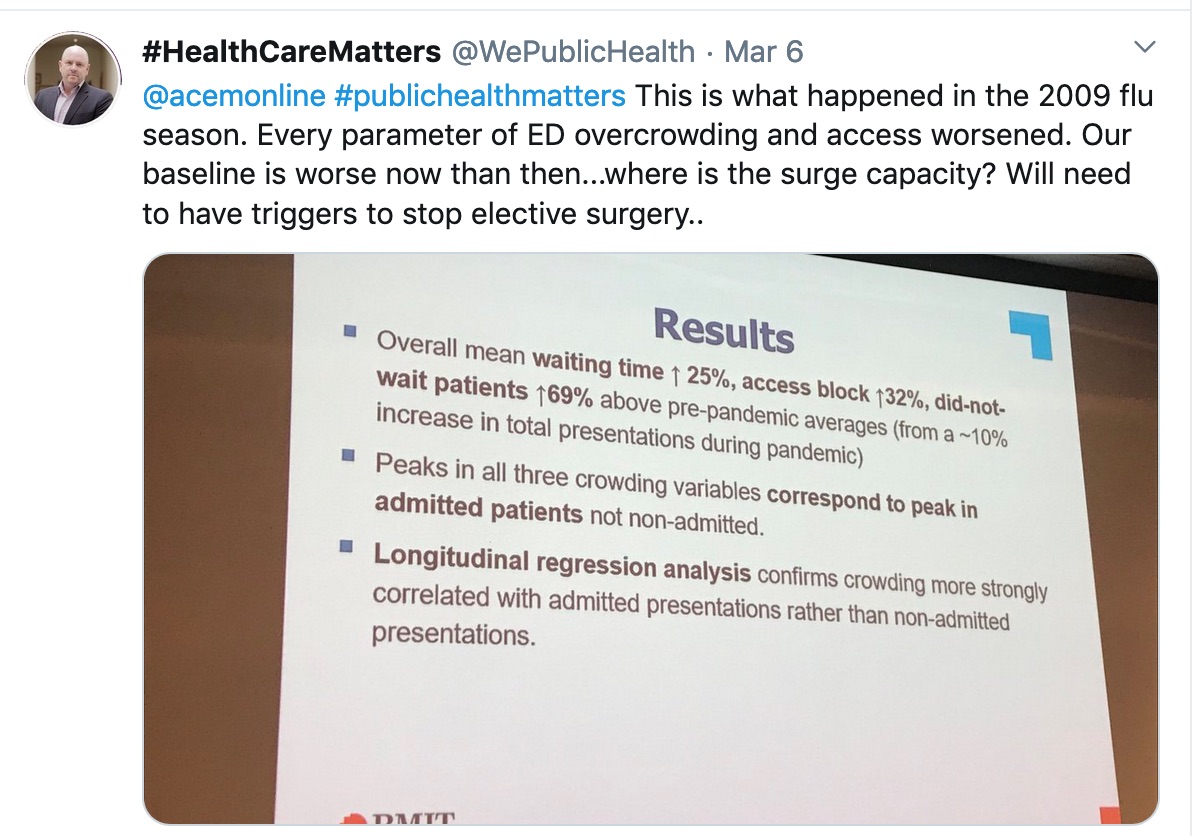 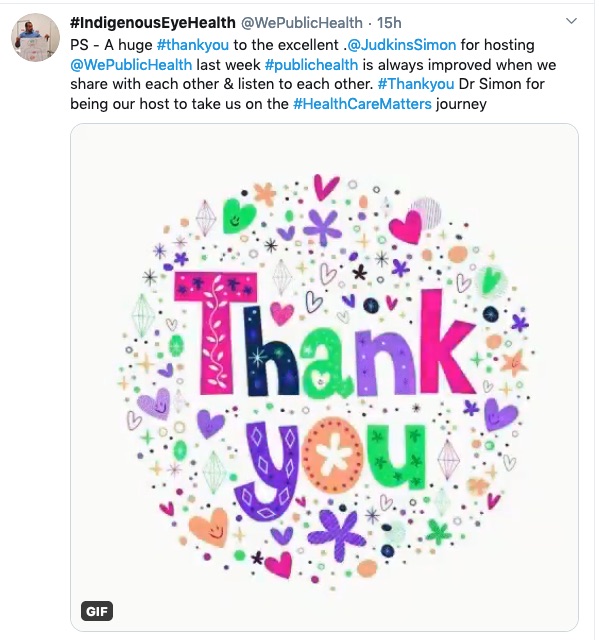 See our previous stories from @WePublicHealth guest tweeters in 2020.