How can the digital revolution and social media help the Cochrane Collaboration and those with an interest in evidence-informed practice and policy?

Below are some notes from a presentation on this subject at the Australasian Cochrane Symposium in Melbourne on July 1. Some of the general content will be familiar to regular Croakey readers, but I’m posting it in case the links/resources are of interest, particularly for those who were at the symposium. Also included is some material that I didn’t have time to mention on Friday. 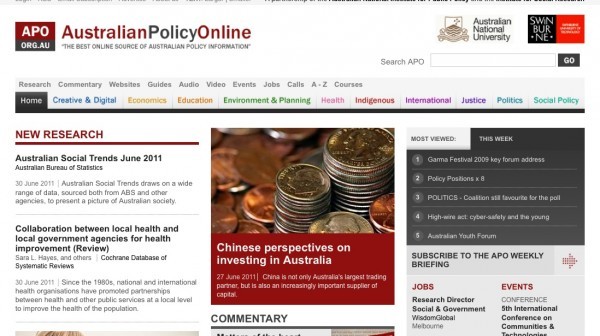 As the advent of new media initiatives like Australian Policy Online indicates (a terrific resource for those with an interest in promoting policy-relevant evidence), the digital revolution is producing many new opportunities.

It is challenging hierarchies, institutions, established power structures and creating opportunities for democratisation of knowledge, sharing of information, and the breaking down of silos, institutional and professional barriers.

As an example of the crumbling walls and changing power dynamics, the Queensland Mental Health Minister, Curtis Pitt, joined in last week’s rural mental health Twitter chat, (the transcript is here), and now the Federal Minister, Mark Butler, apparently wants to join one of the group’s sessions as well.

For those not familiar with these groups, they enable anyone, anywhere to join in a twitter conversation around specific issues. So you can have members of the public chatting with mental health researchers, clinicians and organisations, for example. If politicians are wanting to engage in this space, that says something about these groups’ perceived influence. Various twitter chat groups may be of interest to Cochrane types, including a Twitter journal club for publications relevant to clinical medicine, and another on social media and healthcare.

Some recommended reading is a recent report from the Federal Communications Commission in the US, titled The information needs of communities: The changing media landscape in a broadband age. More details are in this previous Croakey post.

For those interested in using digital media to engage wider audiences in evidence-based issues, there are some pointers in this quote from a profile of ABC boss Mark Scott in the July issue of The Monthly, written by my colleague Margaret Simons:

“ABC content is made freely available for use on other websites. There is a widget you can download that will put an ABC newsfeed on any web page. In the first five months of this year, 3.8 million visitors to ABC Online arrived via Facebook – a five-fold increase on the same period last year. Nearly 1 million arrived via Twitter, which more than doubled the figures of the previous year. And many people absorb ABC content on Facebook and Twitter without ever actually getting to the ABC-owned platforms at all.”

Or as the University of Sydney’s Becky Freeman put it in this recent article on social media and public health:

“It’s no longer enough for health agencies to supply accurate information for health consumers on the web. We expect content to be interactive, shareable, multimedia in format, portable between mobile and other tech devices and easily reached through sites we are most familiar with such as Facebook, YouTube and Twitter. Health promotion agencies need to stop dismissing these new technologies as being merely a passing fad or affecting a small number of technology-obsessed teenagers, and start embracing the new health content and traffic that drive these sites….One of the central tenets of any health promotion initiative is to go where your target audience is – they’re online, they’re on mobile phones and no poster or pamphlet is going to reach them there.”

This Victorian Government site is tremendously useful for those wanting to stay in touch with developments in Gov 2.0 in Australia and more widely. It is likely that many of the objectives of Gov 2.0 have some fit with the objectives of the Cochrane Collaboration eg open data, more transparency, better policy, engaging the community… 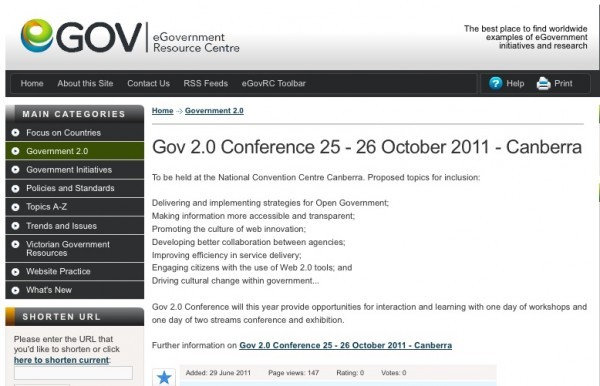 It currently lists a number of health-related projects…

A Health 2.0-enabled BHC has the potential to integrate health promotion into people’s day-to-day lives as well as helping people live better with chronic illness. With the incidence of chronic disease on the rise, over the long term Health 2.0 has the potential to help people make more informed decisions about their own health. The BHC Health 2.0 platform will be user-centric and focused on individual user- created content. A number of Web 2.0 applications for BHC are proposed to support citizens to establish and maintain healthy behaviours and lifestyles.

Government 2.0 Action Plan: DiVine Website – people with a disability supporting each other

The Swoop! campaign by Department of Sustainability and Environment (DSE) aims to raise awareness about birds swooping to protect their eggs and young during breeding season and encourage people to avoid or take extra precautions when venturing near breeding birds’ territory.

wePlan Parks breaks new ground as the first instance where social media has been used to engage with the public in guiding the future of Victoria’s parks. It was inspired by the City of Melbourne’s Future of Melbourne wiki and by a desire to reach a wider audience in real time throughout the life cycle of developing a park management plan. Parks Victoria is using wePlan Parks to complement existing citizen engagement and public consultation approaches.

Meanwhile, five years ago, what would we have made of a headline saying “Cabinet on Twitter”…

The press release says: “The Cabinet will also next month hold a Virtual Community Cabinet, where all Ministers will answer questions and respond to issues on Twitter. Harnessing new technology and reaching a more diverse range of Canberrans, who have previously not engaged directly with Government is symbolic of our new approach to open government.”

3. The power of the crowd

The Cochrane Collaboration was crowd-sourcing back in the days when this wasn’t a trendy term of the Twitterati. But the digital revolution offers great potential to expand the Collaboration’s crowd sourcing capacity, as well as the uses to which it is put.

The Federal Communications Commission report already mentioned cites an estimate by web scholar Clay Shirky that the citizens of the world have one trillion hours of free time annually—what he refers to as a “cognitive surplus”— that could be devoted to shared projects and problem solving. Shirky says some of this is being applied to civically important communal digital projects, and no doubt Cochrane members could come up with some suggestions for other such projects.

For the purposes of this presentation, I did a mini-experiment on crowd-sourcing with Twitter, asking for suggestions about how social media could be used to help promote evidence.

These are some of the responses that landed within hours: 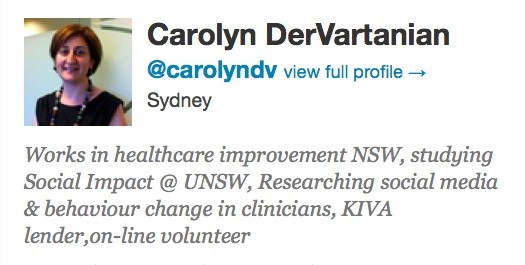 Rural GP Dr Sue Page also sent in the details of several listserves and other digital resources, including this blog on using Twitter to keep abreast of research and this blog on how a university in Philadelphia is using text messages to convey heart health messages to an underserved community.

I was also sent a link to this story investigating the use of social media in US healthcare. 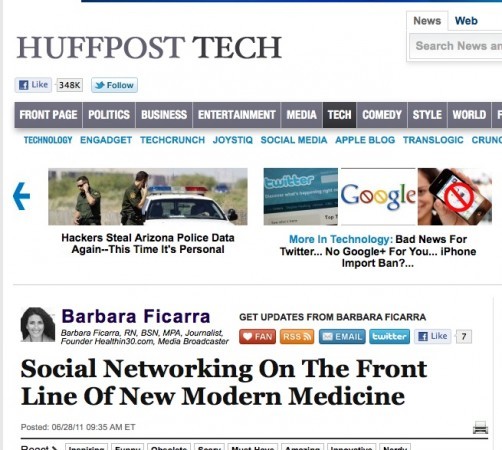 And this report on using social media to improve healthcare quality. 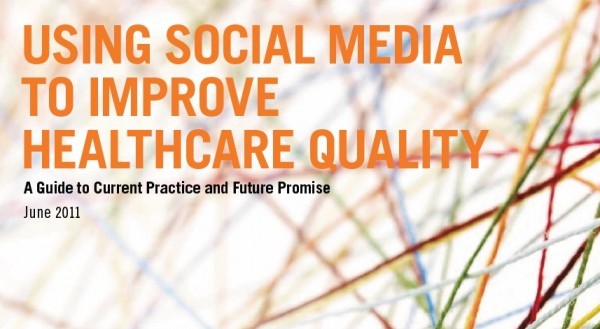 The digital revolution is also bringing new opportunities for collaboration in the digital media space, eg:

The Conversation, a joint effort between journalism and academe. 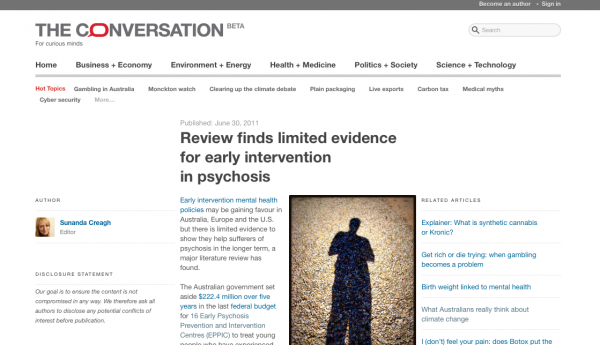 Inside Story, another not-for-profit media initiative (which I occasionally write for, as per the “Less is More” article below), provides another opportunity for those wanting to write or read about issues in depth. 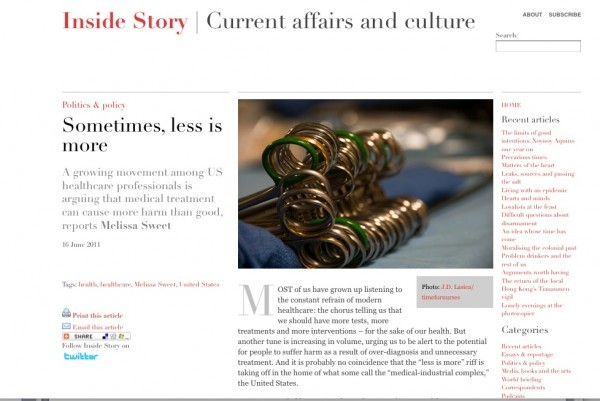 Members of the Cochrane Collaboration could also consider pitching a story to YouCommNews, a website established by the Public Interest Journalism Foundation to enable community commissioning and funding of journalistic investigations. Or you could help fund some story pitches already on the website (one of the most recent suggestions for a health investigation is below).

Or you might consider doing some citizen journalism yourselves? 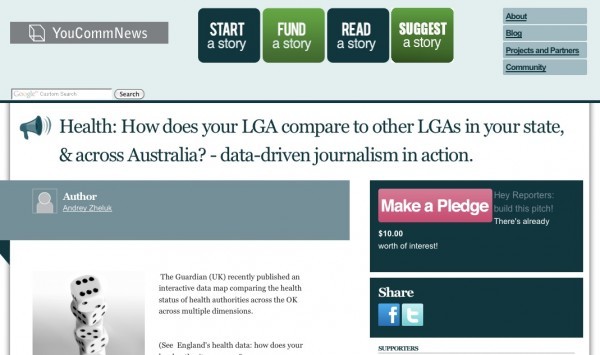 This recent Croakey post explored the potential for public health and public interest journalism to engage with the hugely popular world of online games. Surely games also have the potential to help make evidence-based concepts engaging, relevant and useful to a broader audience. And there are many other new platforms emerging…

The digital revolution is offering so many opportunities for creativity, innovation and experimentation (as well as developing an evidence base that can take us beyond the anecdotes of enthusiasts like myself).

But there is also the agghh factor – that all this takes a lot of time and resourcing. It is difficult to keep up with the avalanche of digital development, particularly when so many organisations and institutions are being held back by last-century policies and thinking.

There are significant resourcing implications for those wanting to engage effectively with the digital revolution. It would be folly to see this as simply an add-on to the work of existing communications people/departments. It has import way beyond communications.

This clip re Victorian Justice Department social media policy is smart, funky and worth a watch. It’s something many health organisations could learn from…