Introduction by Croakey: The Federal Government is exacerbating childhood poverty and inflicting harm on families and children.

That was a clear message from an Anti-Poverty Week event this week, reported below by Croakey’s Marie McInerney.

Meanwhile, Food Bank released its 2021 report, finding that one in six Australians (17 percent) can be categorised as severely food insecure and a further 11 percent as moderately food insecure.

Shepparton is a regional city north of Melbourne that is home to the largest Aboriginal and Torres Strait Islander population in Victoria and was hailed recently during a large COVID-19 outbreak by Premier Daniel Andrews as “a strong and proud community…the best of Victoria on display”.

It was also one of 10 national sites chosen in 2011 “for some extra attention” as part of Commonwealth welfare reforms trials under the then Labor Government, an Anti-Poverty Week webinar was told this week.

The ongoing trial has as its “priority target groups” at-risk young people, particularly teenage parents, families without a working parent, and the long-term unemployed.

As well as increased compliance requirements for participating benefit recipients, the trial has offered additional support options, including intensive casework and bonus payments for a time for those who volunteered to have a proportion of benefit income quarantined.

But ten years on, David Tennant, CEO of the Shepparton-based FamilyCare service, makes no bones about the impact of the trial.

The group of people participating in it, who were already doing it tough because income support was too low, are “now almost entirely reliant on a cycle of emergency relief”, Tennant told the Brotherhood of St Laurence (BSL) webinar, titled ‘Shifting the dial on child and family poverty: what will it take?’.

And their children, according to the Australian Early Development Census (AEDC), had “actually gone backwards”, he said.

“For me, the takeaway is that the state unfortunately is the single biggest driver of structural disadvantage in income poverty in Australia.”

One in six in poverty

BSL Head of Children’s Programs Katrina Herbert opened yesterday’s webinar with a presentation of key data on child poverty, including that one in six Australian children aged 0-14 years – or 774,000 in total – lived in poverty in 2017-2018.

They were likely to be at least one year behind in reading and numeracy even by Year Three at school.

The panel of experts said the multi-dimensional aspects of child and family poverty required many complex approaches between and within different service systems.

This meant there was “no singular solution to the issue of child poverty and no singular sector that’s responsible for addressing child poverty”, said Professor Shelley Mallett, Director of the Research Policy Centre at the BSL.

But the panel agreed that some solutions are, as Tennant said, “actually really, really simple”, including urgently lifting the rate of income support for families, and stopping threats and punishments of families through taking away payments for any breaches of compliance.

“In any other context, behaving as the Commonwealth does – withholding sufficient money to live from, threatening parents with the possibility that payments might be suspended – would be called a form of financial abuse,” Tennant said.

“Why can’t we say that? And why can’t we acknowledge that certainly for the children in those households, this is a form of abuse.” 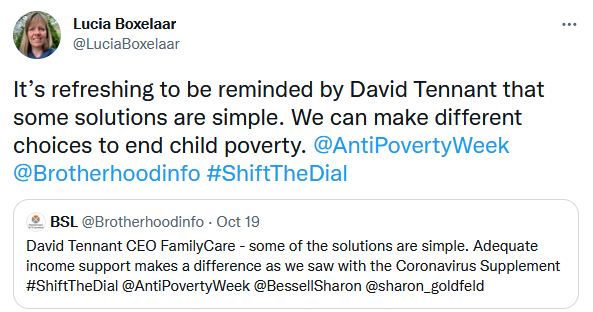 But crucially child poverty rates for children of single parents more than halved during the COVID-19 pandemic, falling from 39 percent to just 17 percent as a result of the $550 per fortnight Coronavirus Supplement — now ended.

“What this shows us is that, with the will, we can significantly reduce poverty,” Herbert said, adding that the pandemic recovery phase means “it’s more important than ever to ensure that children do not fall through the cracks”.

Tennant agreed the coronavirus supplement had made a huge difference, “providing a level of income to people who hadn’t seen real increases in decades, such that they could live with a degree of dignity”. But it had also managed, for a time, to shift a narrative of stigma and shame around welfare support “that’s as much of a problem as poverty itself”.

Tennant referred to the recent COVID outbreak in Shepparton that captured national attention, with nearly 18,000 members of the community – almost a third of the population – forced into quarantine or isolation and saw “an enormous outpouring of support from our community, from around the state, nationally – we had the army arrive to deliver food parcels for people.”

That was all fantastic, he said – but before, during and after that outbreak, Shepparton has 9,000 of its residents, including 3,000 children, living in poverty.

The difference now is “the army’s gone”, he said, urging “that same sense of community and caring” as we see in disasters and emergencies like COVID in recognition that people who are living on insufficient income “just need greater support than they get right now and they certainly don’t need penalties from government”.

Also highlighting the need for political leadership to address shame, stigma, and the structural drivers  of poverty, panelist Professor Sharon Bessell called for child-centred impact assessments of all policies at state, territory and federal levels, “to ensure that we are not causing harm and exacerbating child poverty”.

Bessell, who is Director of the Poverty and Inequality Research Centre and Children’s Policy Centre at the Australian National University, said it was important to highlight positive moves in Australia, such as the release last week of Australia’s first National Children’s Mental Health and Wellbeing Strategy.

But she said there are very serious gaps in public policy in relation to child poverty and that “addressing wellbeing is not sufficient” to address the structural causes and system failures identified by the South Australian Commissioner for Children and Young People in her 2019 report, Leave No One Behind.

Among the challenges, Bessell said, is a “disinclination” on the part of governments of all persuasions to name the problem of child poverty and to directly address it and to value different forms of care compared to what has been considered to be “productive” work.

Policy in Australia is “blind to children, it’s certainly not child centered, or even child inclusive,” she said, referring to her team’s child-centred analysis of the last Federal Budget that found that children were “one of the most neglected groups” in a package touted as “having something for everyone”.

Bessell also highlighted the fundamental impacts of a “very punitive welfare system” in Australia which “places extraordinary conditions and stresses on people who experience poverty” — a system and level of working age benefits that “create poverty”.

And she said that while Australia has rich data, including the Australian Early Development Census, very often it was presented as identifying where poverty and disadvantage were located, instead of examining the underlying drivers, meaning it often further stigmatised those living in poverty.

Panelist Professor Sharon Goldfeld, a paediatrician and director of the Center for Community Child Health at the Royal Children’s Hospital in Melbourne, echoed Bessell’s concerns that children have not been central to policy-making in Australia, noting it had been “difficult to get children onto the COVID agenda at all up until recently”.

Agreeing also that there is no “silver bullet”, Goldfeld said policy and researchers are “constantly hamstrung” by wanting to find simplicity because that is much more palatable to policy makers.

Australia’s multi-billion dollar service system has a lot of the raw ingredients to make a difference, Goldfeld said, but they are mostly delivered inequitably, under the ‘inverse care law’ where the availability of care or services varies inversely with the need for it.

Asked what could alleviate child poverty, she said she has been investigating the benefits of ‘stacking‘ early childhood interventions across the early years of a child’s life, moving towards systematic ways of making a difference to the lives of children and families and away from what she termed ‘ad hoc-ery’. See more here.

In response, Bessell also highlighted the work of the Children’s Policy Centre on “multi-dimensional child poverty”, looking beyond just low income, though that will always be central, to the social and relational dimensions of poverty, including opportunities to participate in society, to play and to learn.

Talking about “relational deprivation”, she said Australia has fantastic opportunities for young people to be part of advisory groups to government but often they are “only available to children who are better off”.

Asked how to enable a more responsive system for children and families, Mallett told the webinar that Australia had been “entirely unimaginative” in its efforts to give children a voice and agency in system design, compared to places like Leeds in the UK, had put children at the centre of program design, including by having a Children’s Mayor, at one stage electing a nine-year-old. 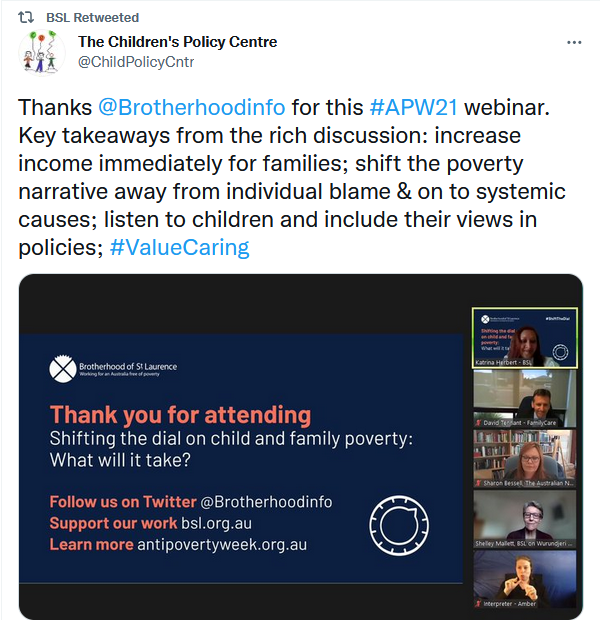 PrevPreviousFocus on the future of nursing through COVID and beyond
NextIn a public health emergency, the Government is sitting on a critical report on misinformation and disinformationNext