How the global response to HIV/AIDS renders Indigenous peoples “invisible”

Australian Indigenous health researcher James Ward has called on the international HIV and AIDS community to identify Indigenous peoples as a “priority population”, warning that they are often invisible in international reports and declarations that shape HIV responses.

He told AIDS 2014 – the 20th International AIDS Conference – in Melbourne on July 23 that this invisibility had “grave implications” for Indigenous cultures, given that many were already fighting for their survival.

“If HIV were to enter these communities, the world’s ancient cultures and customs, and custodians of lands, would be lost forever,” he said.

Associate Professor Ward, from the Baker IDI Heart and Diabetes Institute in Alice Springs, is the first Indigenous person to address an international AIDS conference on Indigenous issues – an alarming lack of representation till now given that many Indigenous communities have disproportionately high rates of HIV and AIDS.

Ward last weekend delivered a warning to the International Indigenous Pre-Conference on HIV and AIDS, held in the lead-up to AIDS2014, that HIV prevalence among Indigenous Australians could escalate, amid growing rates of transmission via injecting drug use and among Indigenous women.

See also his post below from The Conversation that also includes the main points behind that warning and details the Eora Action Plan launched in response.

You can also watch this presentation from AIDS 2014 from Doris Peltier, from the Canadian Aboriginal AIDS Network, on what makes Indigenous people in Canada a key HIV population. 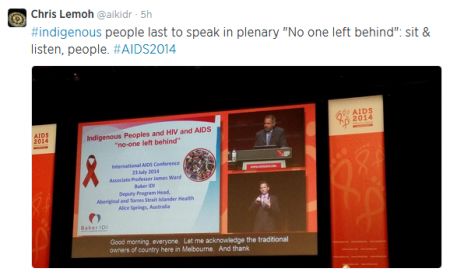 These included those produced by UNAIDS, the Joint United Nations Programme on HIV/AIDS and the World Health Organisation, while the Millennium Development Goals report only mentions Indigenous people in terms of deforestation, he said.

“Of course being Indigenous does not place someone at special risk of HIV per se,” he said.

“It’s the inequalities in health and the social determinants of health that profoundly affect Indigenous people, placing them in “special and urgent need” of being recognised as a key population in international agency documents. If Indigenous people don’t recognise ourselves in these documents then we don’t see HIV.” 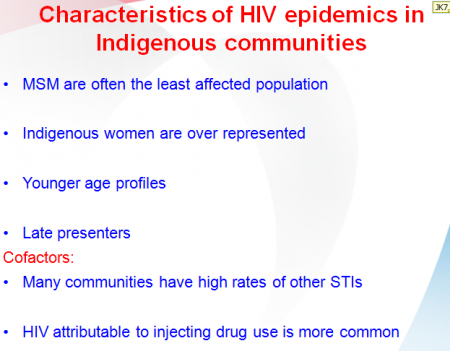 According to a recent United Nations forum on Indigenous issues:

“Experts noted that HIV had been a serious concern among indigenous peoples for many years. Despite a general perception that indigenous communities are at a lower risk because they live in remote areas and their communities are more cohesive, where data are available indigenous peoples are disproportionately affected by HIV. Therefore, experts stressed that, despite the lack of disaggregated data in many countries, it was safe to conclude that HIV is a serious problem affecting indigenous peoples, as it comes associated with stigma, discrimination, lack of sexuality education, lack of contraception and high levels of sexual violence, alcoholism and drug use, all of which are factors disproportionately affecting indigenous peoples. Thus, the lack of data should not be an excuse for inaction.

Participants referred to existing evidence that indigenous peoples affected by HIV have a long and enduring history of mistrust of health services, which results in poor access to health care, late testing for HIV and poor or no care and support for people living with HIV. Conversely, indigenous peoples are part of familial and cultural networks which need to be taken into consideration in the design and development of indigenous HIV prevention programs.”

Ward said another major issue is the lack of global data on Indigenous HIV prevalence, apart from in Canada, the United States, Australia and New Zealand.

“In countries where data does exist, there are often major gaps. Data invisibility equates to disparity, inequity and ultimately increases the risk of escalated epidemics,” he said.

However, the United Nations Permanent Forum on Indigenous Issues (UNPFII) said that with respect to HIV and AIDS, epidemiological data on incidence and prevalence among Indigenous Peoples communities is rare, and surveillance sites are often not established in rural/remote areas where a large number of Indigenous Peoples live. 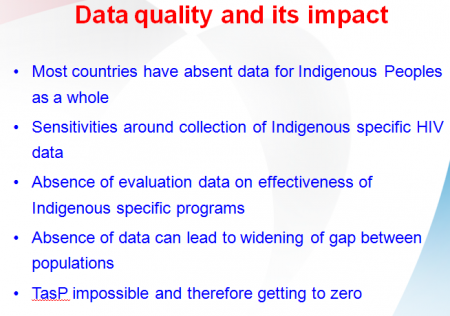 Stepping up the HIV response in the world’s Indigenous communities

Indigenous people are estimated to comprise 4.5% of the total global population. They are often overrepresented in HIV data and recognise themselves as being particularly vulnerable to HIV. In Canada, for instance, First Peoples make up 4 per cent of the population but account for 23 per cent of HIV diagnoses.

In countries where data does exist, there are often major gaps. Data invisibility equates to disparity, inequity and ultimately increases the risk of escalated epidemics.

Such epidemics have grave implications for Indigenous cultures, given that many tribes or clans have only a few hundred to thousand members remaining. If HIV were to enter these communities, the world’s ancient cultures and customs, and custodians of lands, would be lost forever.

Of course, being Indigenous is not a risk factor for poorer health outcomes or for HIV. But the social determinants of health – income, education, employment and working conditions, physical environments, healthy childhoods and access to health care – all impact on health status of Indigenous peoples heavily.

There are also specific determinants that increase Indigenous populations’ vulnerability to HIV. These include:

These factors not only add to HIV vulnerability for Indigenous people; they exponentially increase the risk with each additional determinant.

So, how are Australia’s First Peoples faring?

Rates of HIV are slightly higher among Aboriginal and Torres Strait Islanders: 5.4 cases per 100,000 compared with 3.7 in the wider population. This equates to an overall Indigenous prevalence rate of 0.15 per cent. But the patterns of HIV between non-Indigenous Australians and the First Peoples of Australia are vastly different.

The higher diagnosis rates of HIV are also reported at a younger age. First Peoples of Australia also experience higher rates of other sexually transmitted infections, increasing injecting drug use and continued elevated risk factors among men who sex with men. These factors combine to create a powerful base for HIV to escalate rapidly within communities.

On top of this, Indigenous communities are often marginalised and report having less access to health services.

With the risk factors in place, and in regards to the future HIV response, the First Peoples of Australia are at a crossroads. We can either scale up our actions to reduce the risk of HIV or continue along the same path and allow HIV to take hold in our communities.

All the signs are there. We will soon be trying to deal with a much more insidious problem, like so many other nations and populations.

Australia’s historical approach in dealing with HIV has been one characterised by a participatory partnership approach. We have had overarching frameworks such as harm-reduction approaches to deal with risk in sex workers and peoples who inject drugs. And some high-profile campaigns about HIV have resonated in communities for the last 30 years.

But as the world becomes more digitised, globalised and moves more quickly, we need to step up the pace of our efforts so Indigenous peoples are not left with HIV. The Eora Call to Action urges governments and community organisations to step up and commit to:

Being true to these targets will stand us as outstanding international leaders into the future.

• This article is republished from The Conversation.

Meanwhile, from the Twittersphere…. 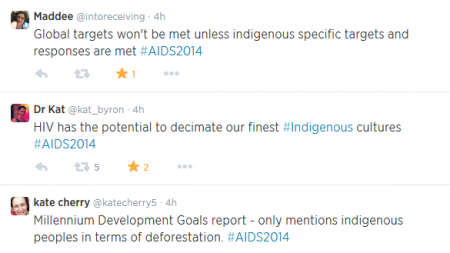