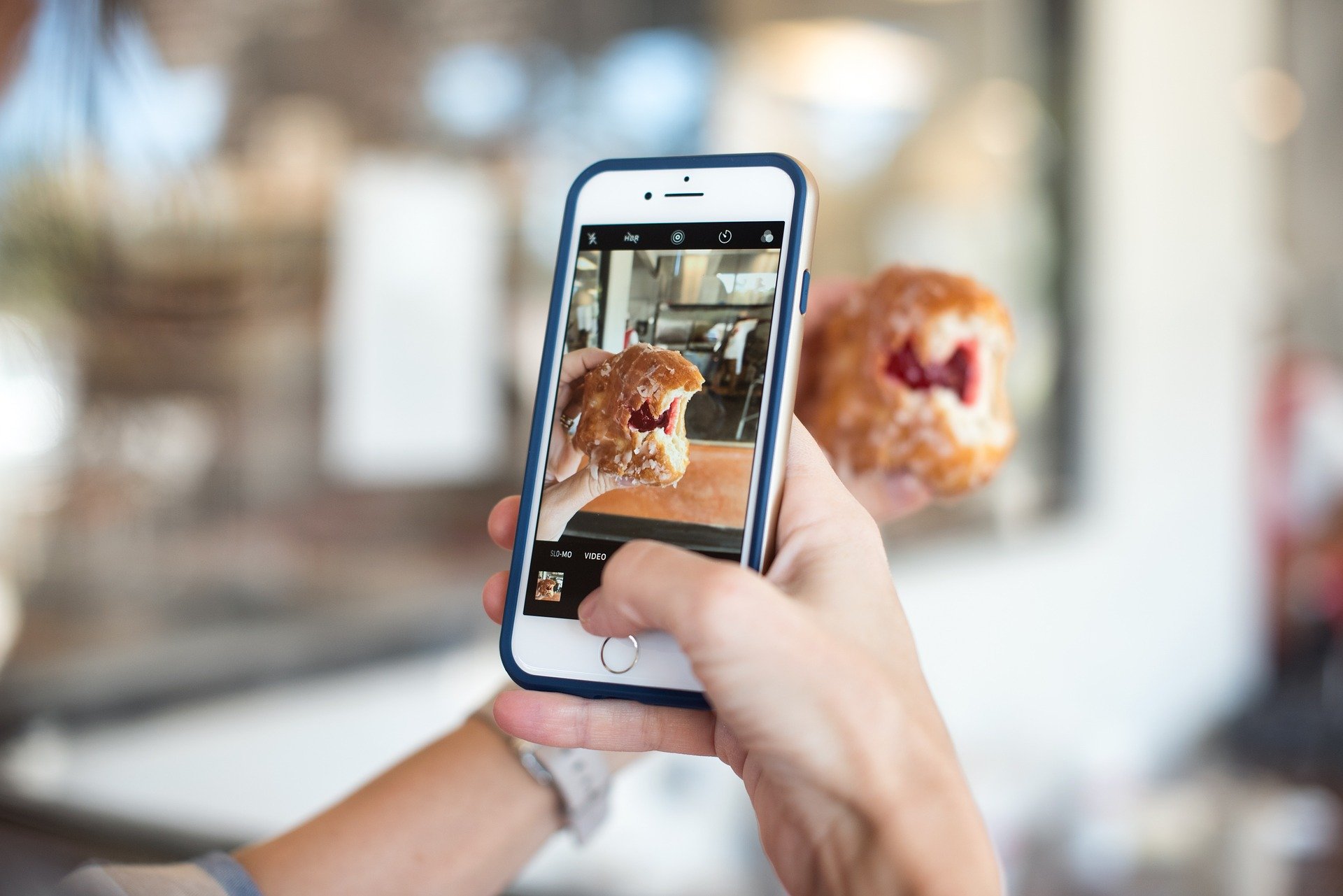 Image by StockSnap from Pixabay

Introduction by Croakey: For a demonstration of the rapid growth of TikTok, a video-sharing app owned by a Chinese company, check the mesmerising graphic at this post charting its growth relative to other platforms over the past several years. In January this year, TikTok was said to have a billion monthly online users.

Its rapid growth is also documented in the Reuters Institute Digital News Report 2022. An online survey conducted at the end of January/beginning of February this year, involving more than 93,000 online news consumers in 46 markets covering half of the world’s population, found TikTok to be the fastest growing network in this annual survey, reaching 40 percent of 18 to 24-year-olds.

TikTok, Instagram and Telegram were the only networks to have grown in the last year. TikTok use is much higher in parts of Latin America, Asia, and Africa than it is in the United States or Northern Europe: in Turkey, 21 percent of respondents reported using TikTok for
general purposes; in Indonesia, it was used by 45 percent of 18 to 24-year-olds; in Thailand, 42 percent of respondents reported using it for any purpose.

University of Canberra researchers recently reported that TikTok usage had doubled in Australia since 2020 (from seven percent to 15 percent) and now one-third of users say they use it to get news.

These findings raise significant questions about the growing market power of this platform – especially given recent concerns about its “aggressive data harvesting” – at a time when researchers are investigating its “astronomical reach” as a platform for unhealthy marketing.

A study just published in BMJ Global Health investigated how unhealthy food and non-alcoholic beverage brands are using TikTok as a marketing platform. The researchers – from Deakin University, the University of Queensland and the University of Wollongong – call for policies to protect children from the harmful impact of food marketing on social networking platforms.

TikTok, a social networking platform where users create, post, watch and engage with short videos, has skyrocketed in popularity since its global release in 2018. The platform now boasts over one billion monthly active users globally and is particularly popular among children; in Australia, over a quarter of Generation Alpha (those born from 2006 onwards) reportedly use the platform.

Our new research, published this week, shows that junk food companies are tapping into TikTok as a new way of marketing their products, including by capitalising on the platform’s opportunities to, in TikTok’s own words, turn users into “unofficial brand ambassadors”.

Foods high in saturated fat, added sugars and/or added salt – junk food – increase the risk of obesity and chronic disease.
Almost 40 percent of Australian children’s energy intake comes from such food, yet children are exposed to marketing for these very foods as they go about their lives.

Whether they are online, watching television, on the way to school or watching or playing sport, junk food marketing infiltrates our children’s lives. Clear evidence shows that such marketing increases children’s preferences for and consumption of these foods, undermining our children’s right to health.

In our study, we looked at the marketing strategies used on TikTok by 16 of the world’s top-selling food and non-alcoholic beverage brands. This included their use of ‘branded hashtag challenges’, challenges initiated by brands that users are encouraged to respond to by creating and sharing their own videos. Videos related to each specific branded hashtag challenge are united by use of a challenge-specific hashtag.

We found that the branded hashtag challenges initiated by big junk food brands called on users to create and share videos featuring branded products, such as the #DoritosDuetRoulette challenge, which encouraged users to film themselves eating bags of Doritos Roulette chips (that contained a small number of spicy chips).

Other challenges called on users to create and share videos featuring brand-supplied videos, like the #McDonaldsCCSing challenge, which asked users to record themselves singing alongside a video featuring images of McDonald’s Crispy Chicken Sandwich. Some challenges provided branded effects, like stickers or filters that featured branding, for users to use in videos.

We also analysed a sample of more than 600 videos created and shared in response to branded hashtag challenges to see whether brands were in fact successful at turning users into brand ambassadors.

We found that the videos overwhelmingly featured junk food companies’ branding (96% of videos) and product images (68%). They also mostly portrayed a positive sentiment (73%) – for example, by showing users enthusiastically participating in the challenge or praising the brand—or a neutral/unclear sentiment (25%). Very few videos portrayed a negative sentiment (3%).

Why does this matter?

While the junk food companies reap the benefits of product and brand exposure generated by trusted everyday users, and as the deep pockets of the food industry get deeper, TikTok users creating and sharing such content receive little to no reward and unwittingly scaffold companies’ profit-driven marketing activities.

The World Health Organization has long called for policies to protect children from the harmful impacts of junk food marketing, including marketing children are exposed to online. These recommendations are echoed in Australia’s recently released National Preventive Health Strategy and National Obesity Strategy.

Yet, online marketing of junk food remains virtually unregulated, both in Australia and globally.

This year, the United Kingdom, as part of its obesity strategy, became the first country in the world to pass legislation that bans all paid-for online advertising of food and non-alcoholic beverages high in fat, sugar or salt.

However, the UK Government has officially “paused” implementation of the restrictions for a year, meaning they will not come into force until at least January 2024.

Even when the UK restrictions are implemented, it is unlikely that they would prohibit all branded hashtag challenges that junk food companies initiate on TikTok.

The restrictions exempt ‘brand advertising’ so long as the advertising does not include any food or non-alcoholic beverage high in fat, sugar or salt. Nearly half the branded hashtag challenges in our study promoted brands, rather than foods per se, and would therefore be out-of-scope of the restrictions.

Advertising is the cornerstone of social media platforms’ business models and as these platforms evolve – and they will – so too will the marketing strategies they enable. We are by no means at the height of junk food marketing online.

In the meantime, we can sit back and watch as our children are exploited for economic gain, and at the expense of their health – or we can demand that our governments take action to protect our children from the harmful impacts of junk food marketing. 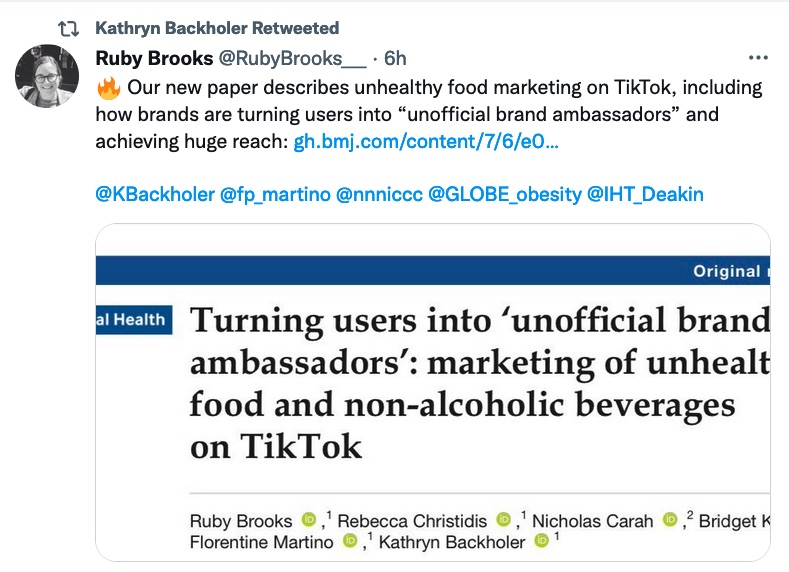 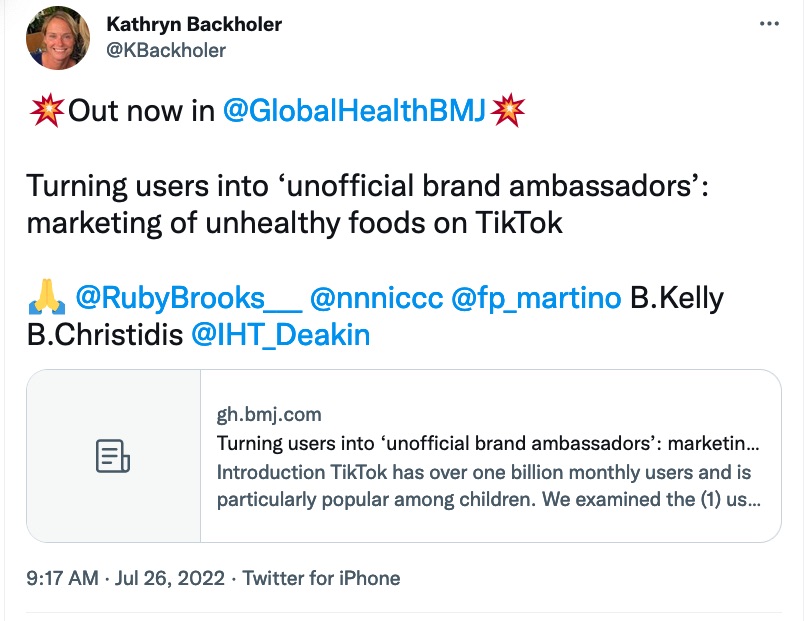 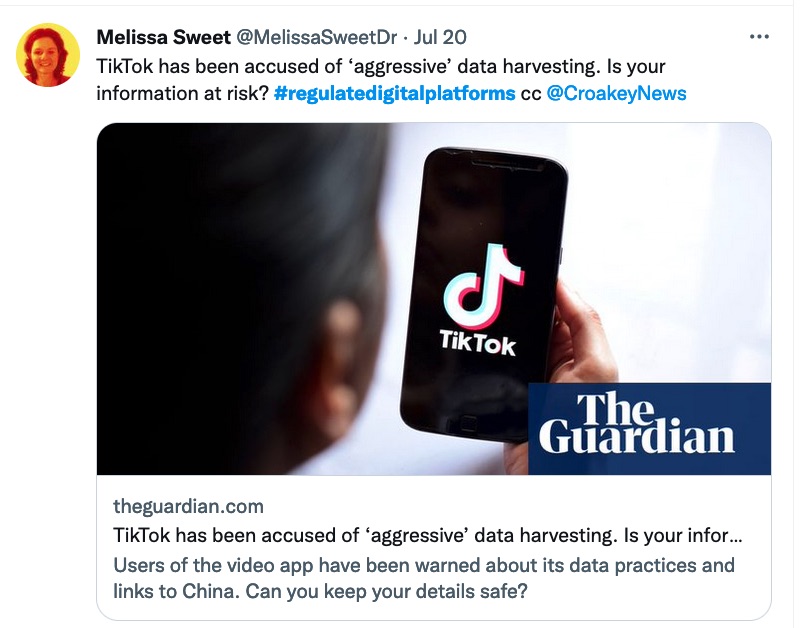