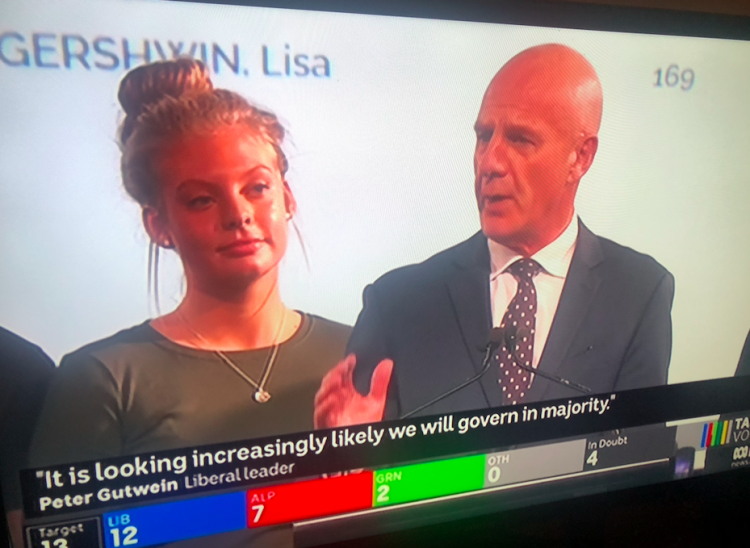 Huge challenges, not just health and housing, on agenda for Tasmania

Introduction by Croakey: “If the health system doesn’t improve, I’d say you’re gone at the next election,” was the stark message to the Tasmanian Liberal Party from ABC news presenter Guy Stayner in the tally room on election night as Premier Peter Gutwein’s government looked likely to be returned with a one-seat majority.

Health and housing affordability were both high on the agenda for the 1 May poll and Gutwein promised, in his speech on Saturday night, that “health will be better” and that his government would “keep delivering more housing solutions because every Tasmanian deserves a roof over their head”.

But the Liberal and Labor parties resisted strong action in other critical areas, including on climate, weak political donations disclosure laws, and secret deals made with the gambling industry, as Tasmanian Greens Leader Cassy O’Connor pointed out in a fierce ‘concession’ speech on election night.

Raising many of the issues that public health and environment groups had sought to put on the agenda for the election, O’Connor said there could be no “going back to normal because normal wasn’t working”.

“More than 120,000 Tasmanians live in poverty. Children are going without. Our hospitals are in dire straits. The rental and housing supply crisis is pricing Tasmanians out of their own paradise, and increasingly onto the streets,” she said.

And nature was “under assault with a renewed level of almost gleeful intensity under the Liberals”, O’Connor said, calling for an end to logging and burning forests and highlighting fishing farm issues that have been graphically raised by Richard Flanagan in his new book ‘Toxic: The Rotting Underbelly of the Tasmanian Salmon Industry”. 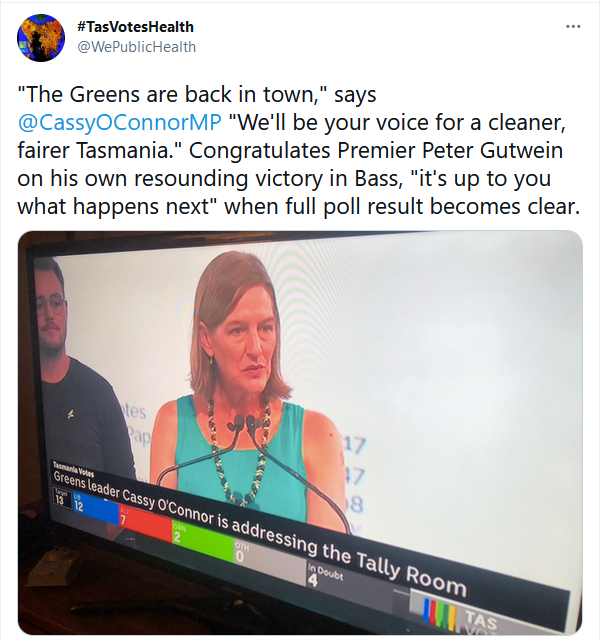 O’Connor also highlighted worrying relationships between industry and government in the state, including that the Premier would not, ahead of the poll, release details of the tax rate to be paid by the Federal Group on revenue from its casino machines, as the Sydney hotel group’s 50 year exclusive pokies licence comes to an end.

As Guardian Australia has reported, Tasmania’s Labor Opposition signed a memorandum of understanding with the Tasmanian Hospitality Association, released only after it was leaked to the media, promising to back the rights of pub and club owners to own and run pokies.

It represents a major backflip, with the party bruised at the last election by concerted industry opposition to its proposal to remove pokies from pubs and clubs.

The Greens Leader said mining, logging, fish farming and gambling industries in Tasmania pay some of the lowest royalties and license fees in the country, and operated amid the weakest political donation disclosure laws in the country.

That left Tasmanians “ripped off by both the major parties who are taking their corporate donations, then trading your treasures for trinkets”, she said.

Postal votes are still being counted, but Gutwein has told media he is “becoming increasingly confident” of forming majority government though he is sticking by his promise to resign rather than head a minority government.

Such “arrogant” stands by both Liberals and Labor in Tasmania have been criticised today by former Labor Tasmanian Senator and Federal Minister Margaret Reynolds, who said “juvenile rhetoric” ruling out alliances between Labor and Greens “is quite foolish in real politics when we might expect a more sophisticated agreement about how these parties could cooperate in the best interests of the community”.

Writing at Pearls and Irritations on the election campaign, Reynolds says in many parts of the world democracy is enhanced by leaders having to negotiate and form appropriate coalitions based on the will of the voters.

Reynolds says another lesson for federal politics from Tasmania’s poll is in selection of candidates, after both major parties in Tasmania had continued to choose some “who appear to offer little vision for a career in shaping public policy for a changing community”.

“Sadly, too many preselections are based on individual and party interest with scant attention to the understanding and expertise a candidate brings to the role,” she wrote.

Below is a selection of tweets from @WePublicHealth’s #TasmaniaVotesHealth focus on the state poll from last week. 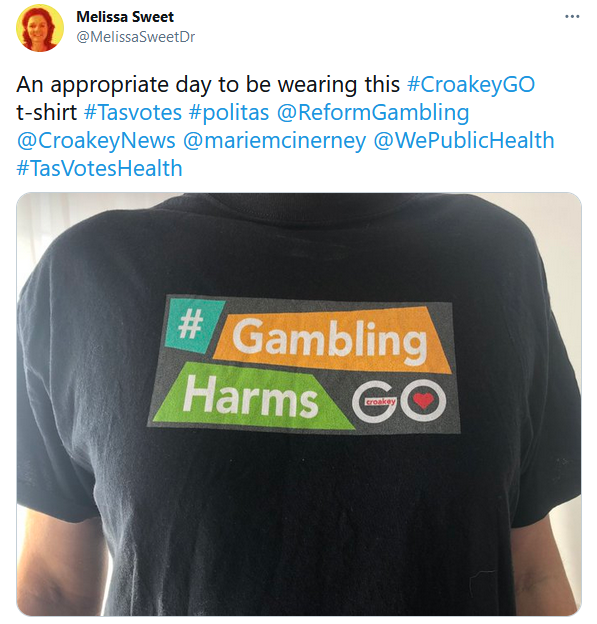 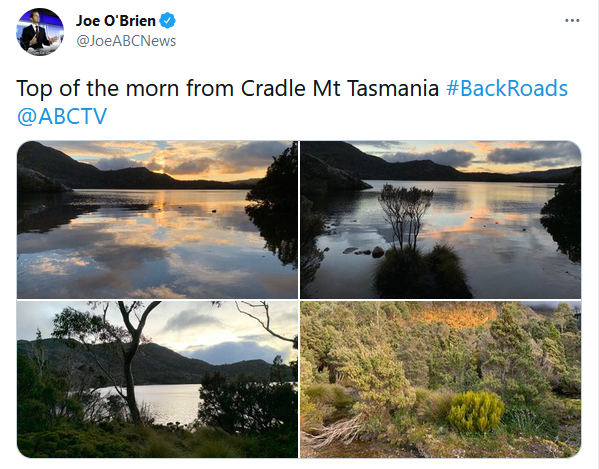 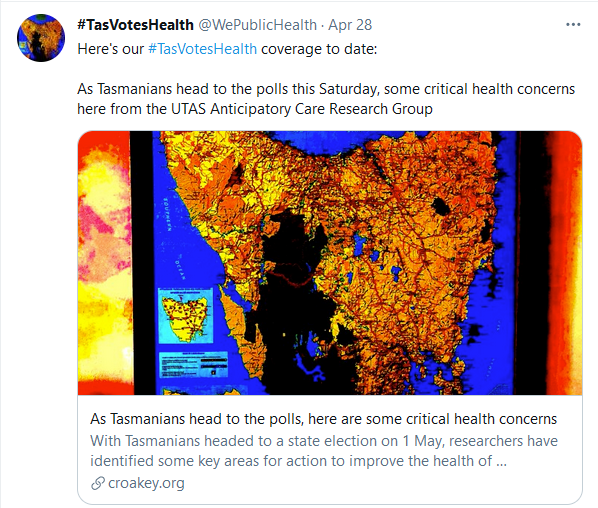 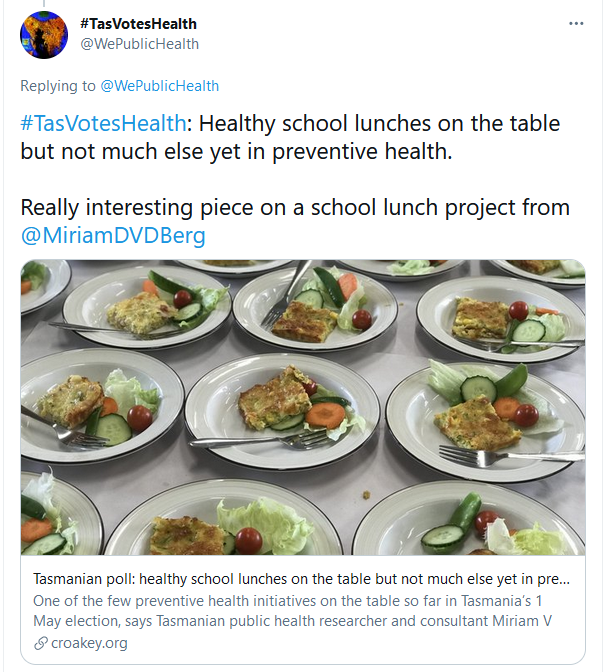 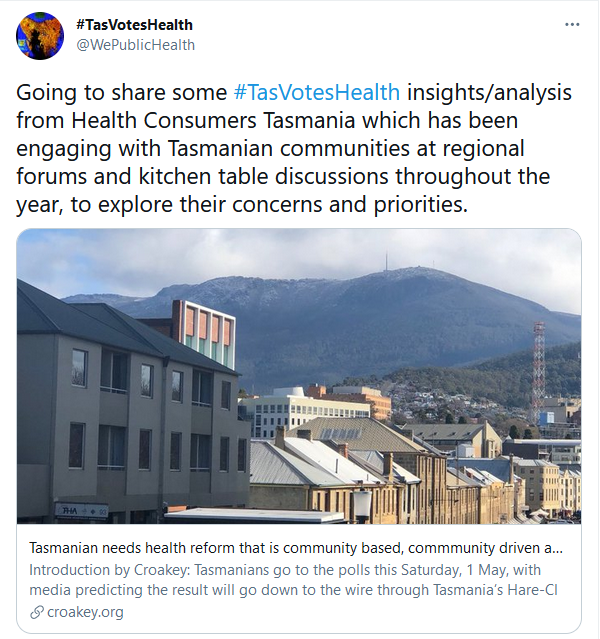 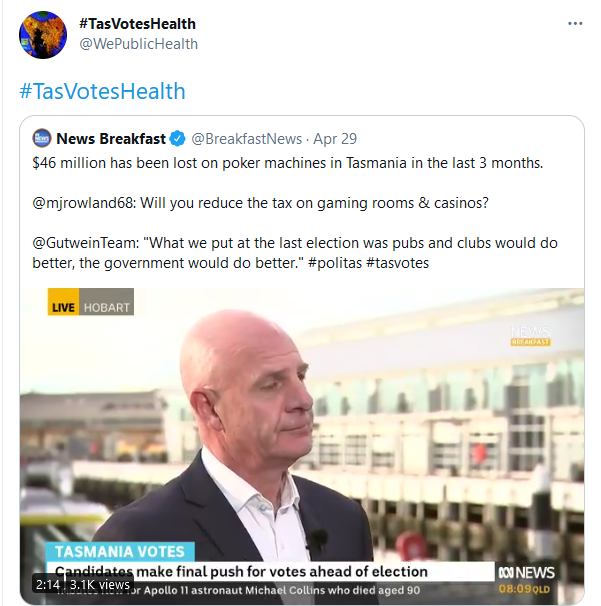 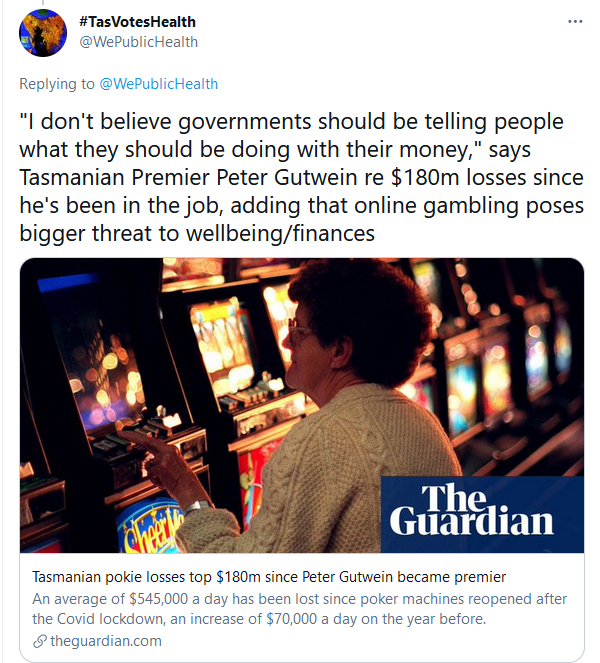 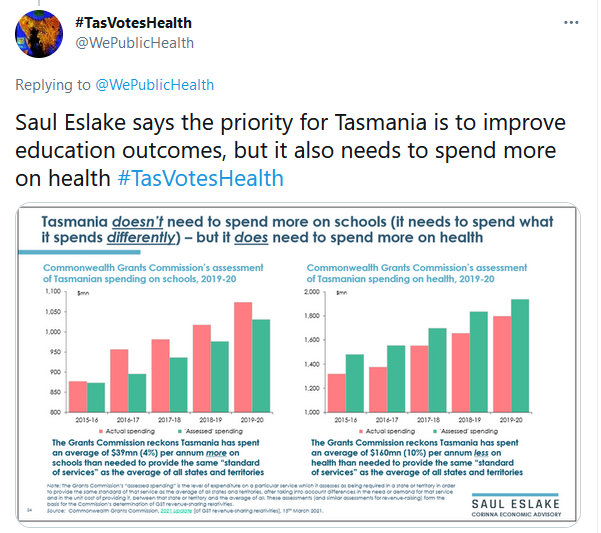 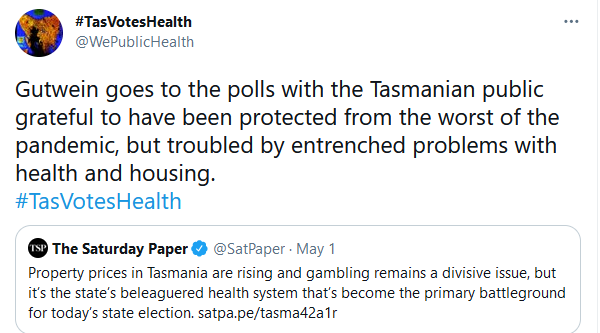 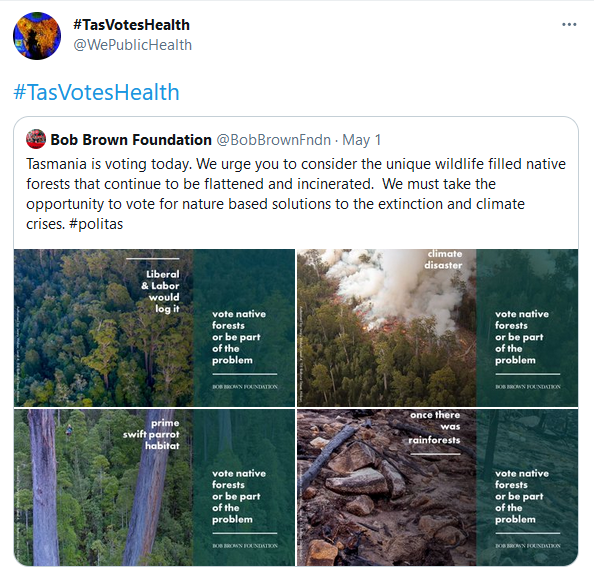 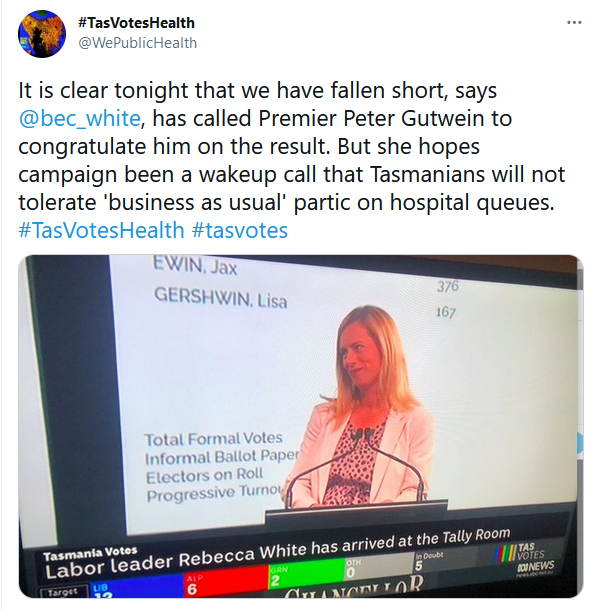 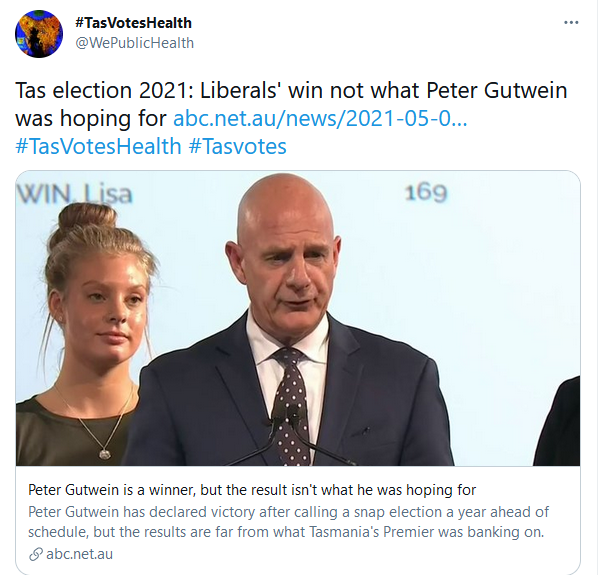 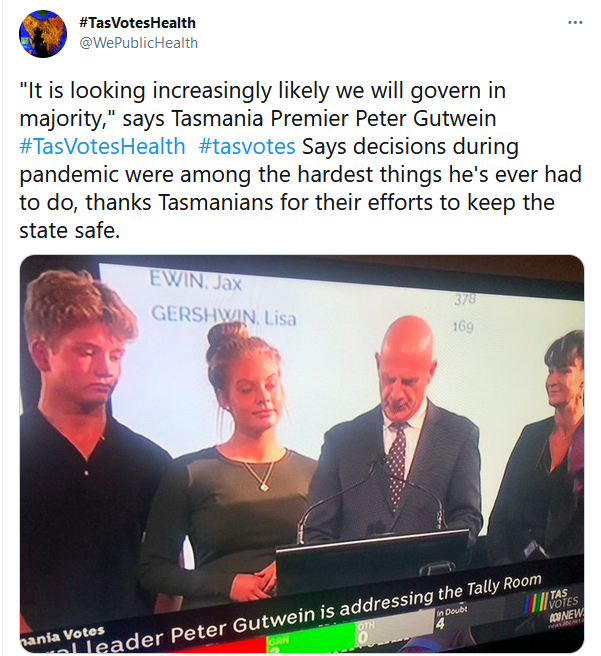 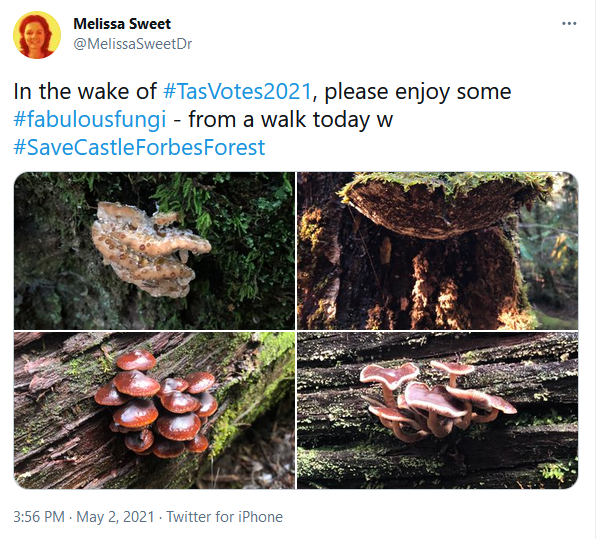 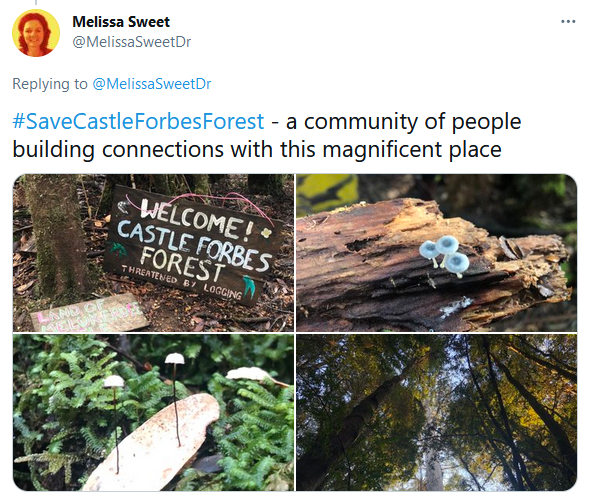 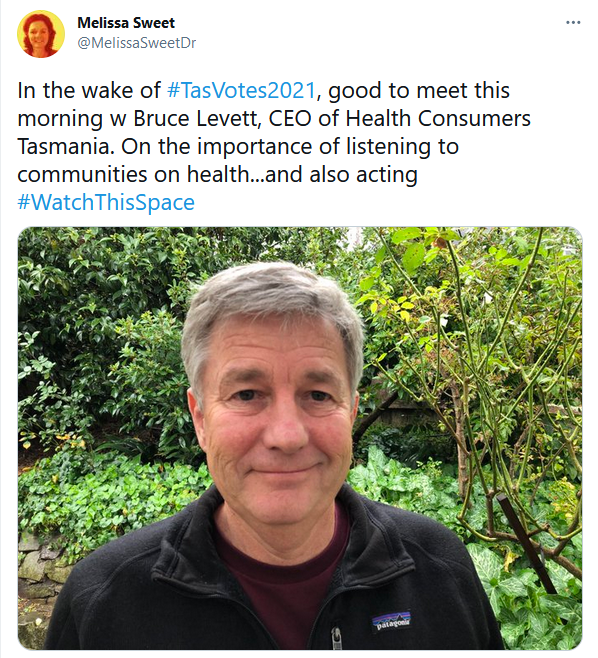