“I needed help, instead I was punished”: what will it take to deliver national action on justice?

“I haven’t seen anyone with an intellectual disability who hasn’t gotten worse in prison. They are often punished [by staff] when struggling to communicate or seeking help. The staff don’t get that people with intellectual disabilities don’t understand what’s happening. Staff take things personally and then act out in anger against the prisoner.

That’s the verdict of a psychiatrist who has worked for multiple years in prison and is quoted in a damning report released last week by Human Rights Watch.

The 93-page report, “I needed help, instead I was punished: abuse and neglect of prisoners with disabilities in Australia,” found that people with disabilities in prisons across Australia are at serious risk of risk of bullying, harassment, violence, and abuse from fellow prisoners and staff and disproportionately held in solitary confinement for 22 hours a day.

“Being locked up in prison in Australia can be extraordinarily stressful for anyone, but is particularly traumatic for prisoners with disabilities,” said Kriti Sharma, disability rights researcher at Human Rights Watch and author of the report.

“The services to support a prisoner with a disability just aren’t there. And worse, having a disability puts you at high risk of violence and abuse.”

This week brought further concerns. Research by the Telethon Kids Institute in Western Australia has found that a shocking nine out of ten young people in WA  youth detention are severely impaired in at least one area of brain function.

Published in the journal BMJ Open, the WA research also found that one in three of  young people in detention had foetal alcohol spectrum disorder (FASD) – the highest known rate of FASD among any population involved in the justice system worldwide.

See a summary of the research in this article at The Conversation, or you can access the full report here.

Governments must “stop passing the buck”

Together the reports must add to pressure on the Australian and state and territory governments to take national action to stop abuse in detention facilities, for both children and adults, and where possible to keep people with disabilities out of the criminal justice system.

They should also feed directly in to the current Closing the Gap refresh process, which is reviewing targets to improve health and wellbeing for Aboriginal and Torres Strait Islander people who suffer disproportionately high rates of incarceration, as do people with disabilities, who make up 18 per cent of the population but a staggering 50 per cent of the prison population.

Ongoing research has shown that Australia imprisons thousands of Aboriginal people with mental and cognitive disability each year, “managed” by police, courts and prisons due to a dire lack of appropriate community-based services and support.

The Federal Government last week formally responded to the Royal Commission into the Protection and Detention of Children in the Northern Territory, which was sparked by revelations of abuse at the Don Dale juvenile detention centre and handed down its final report late last year.

Its response was slammed by the Human Rights Legal Centre for “cherry-picking” the recommendations, and seeking to shift responsibility to the NT Government, rather than leading the way with national action.

“Stop passing the buck. Too many children, families and communities have been harmed by our punitive and ineffective child protection and youth justice systems, we owe it to them to ensure each and every recommendation from the Royal Commission is pursued with vigour from all levels of government,” said Shahleena Musk, a Senior Lawyer at the Centre.

Change the Record agreed, describing the response by the Prime Minister – who had called the Royal Commission after Four Corners broadcast footage of the Don Dale abuses – as “deeply inadequate and disappointing”. It said:

“The Prime Minister needs to stop dragging his heels and revise the response through COAG, and build on the commitments that State and Territory governments have made. The Royal Commission recommended a totally new approach to youth justice. Now is the time for the Government to commit to all the recommendations with a bi-partisan National Plan of Action to overhaul youth justice around the country.”

The focus also needs to be on the states and territories. The First Peoples Disability Network (FPDN), which co-hosted an event to launch the Human Rights Watch report last week, recently warned that it may face closure as a result of New South Wales budget cuts. The cuts have also prompted concern from the NSW Ombudsman that they put at risk investigations into soaring rates of assaults, sexual offences and neglect of people with disability.

During its deliberations last year, FPDN CEO Scott Avery told the Royal Commission it was likely that significant numbers of young people currently in detention and child protection will have some form of disability and are likely to have experienced a lifetime of disadvantage and trauma that compounds the impact of the disability.

“Research is confirming that disability remains the great unspoken issue within justice and child protection systems,” he said in a written submission.

The two year investigation found that problems exist for people with disabilities throughout detention and prison, beginning with lack of proper assessment and identification of a disability, and relying heavily on self-reporting, when many prisoners are not aware of their disability, have never been diagnosed, and/or may hesitate to disclose for fear of stigma.

“Without such information, prisons fail to provide appropriate and adequate services and accommodations for the particular needs of prisoners with disabilities, or to track them within the prison system,” it says.

Across all prisons, Human Rights Watch found that prisoners with disabilities are viewed as easy targets and as a result are at serious risk of violence and abuse, including bullying and harassment, and verbal, physical, and sexual violence.

But the system itself is abusive, exacerbated by a failure to train prison staff.

“Hauling people into the detention unit or safety unit has become common practice for prisoners with mental health conditions,” Sharma said. “Without proper training and alternatives, staff often feel they have no option but to lock them up in solitary confinement.”

“The government’s failure to fulfil its international obligations, particularly under the Convention on the Rights of Persons with Disabilities, compromises a range of rights for people with disabilities in its prison system, including equality and non-discrimination; liberty and security of the person; freedom from violence, exploitation, and abuse; reasonable accommodation; health; and an accessible environment.”

State and Territory Governments should:

The Federal Government should:

Stories from inside prisons

Here are some of the harrowing stories documented in the Human Rights Watch report:

In one case, Mary, a prisoner with a psychosocial disability, was put in solitary confinement for 28 days. After a week, when she was granted access to daily exercise, she was placed in handcuffs connected to a body belt, that restricted her movement. During exercise time, correctional officers mocked her, whistled at her like a dog, and told her to crawl on her hands and knees. During her time in solitary confinement, Mary did not have access to a toilet and was forced to use cardboard urine test containers.

Four officers tackled me. I had played up the day before so they were trying to teach me a lesson. The senior officer stood on my jaw while the other hit my head in and restrained me. They said, ‘You don’t run this prison little c*nt, we do,’ and they cut my clothes off. They left me naked on the floor of the exercise yard for a couple of hours before giving me fresh clothes. They probably did it to humiliate me. Officers call me ‘black c*nt’ heaps of times, it’s normal.” — Aboriginal and Torres Strait Islander male prisoner with a psychosocial disability (name and details withheld by Human Rights Watch), Queensland, 2017

I was sexually assaulted [by other prisoners]…. I know at least one of them raped me, but I kind of blacked out. I was bleeding, I still bleed sometimes. I reported it the same day to two of the supers [superintendents], I filled out the medical request form. They told me if I report it, I would go to the DU [detention unit] for six months. So I ripped up the form in front of them. Then when I went back to the unit, I got bashed up by some of the guys, not the ones who assaulted me…. They beat me up, stomped on me. Called me a dog [traitor]. —Male prisoner with a cognitive disability (name and details withheld by Human Rights Watch), Queensland, 2017

Further reading: New Matilda is running a series of articles from the Human Rights Watch report: you can access them here. 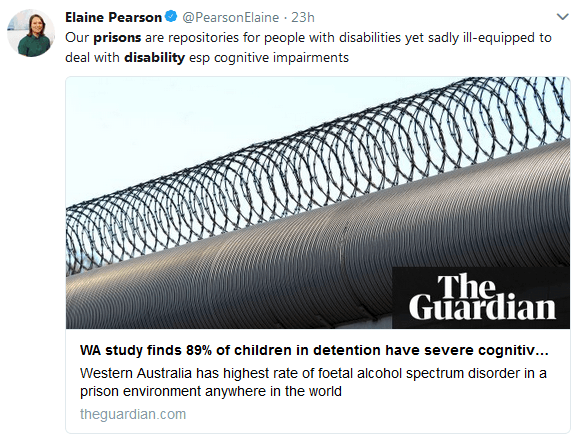 PrevPreviousJoin us to walk and talk about health matters: a #CroakeyGO in Albury on Monday morning
NextWhere now for health journalism at such a challenging time? Join us in building #CroakeyFutures…Next