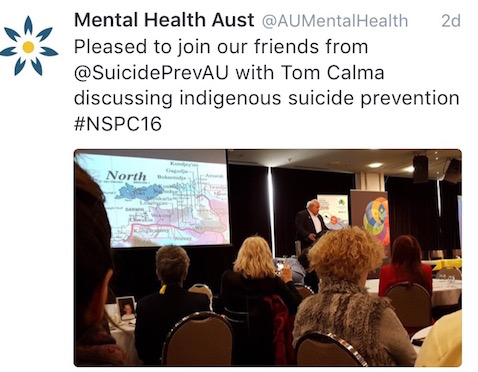 I saw shocked faces in a state of inertia: calling all Australians to embark on a journey of suicide prevention and healing

One of the plenary sessions at the National Suicide Prevention Conference, which wrapped up in Canberra yesterday, was entitled Culture, Context and Capability: Essential Elements for Aboriginal and Torres Strait Islander Suicide Prevention, and was led by Professors Tom Calma and Murray Chapman.

In the post below, the plenary chair, Dr Vanessa Lee of Suicide Prevention Australia, describes the atmosphere in the room as the speakers outlined the sobering statistics on the high rates of suicide in Indigenous Australians. She notes that, while the task of healing this problem can sometimes feel overwhelming, the tools are available and there’s no time for inertia.

(The following details about the petition were corrected and clarified on 31 July): Earlier this year, several leaders from the Aboriginal and Torres Strait Islander community called for a royal commission into Indigenous suicides. Suicide researcher Gerry Georgatos established a petition that has since gained more than 23,000 supporters. Earlier this month, NACCHO joined the call for a Royal Commission into the high rates of suicide in Aboriginal communities. Human Rights Award recipient Dameyon Bonson and Black Rainbow founder wrote recently in The Guardian about the need for a Royal Commission into Aboriginal and Torres Strait Islander suicides. Mr Bonson has said a royal commission had the potential to “open up a dialogue” about suicide in Indigenous communities, and examine whether peak mental health organisations were tackling the problem adequately in an interview with the ABC’s The World Today late last week.

Two things stood out for me after just 24 hours at the National Suicide Prevention Conference in Canberra this week.

The first observation is that the conference provided an opportunity for a collective of interested non-Indigenous organisations (including the National Mental Health Commission) and representatives of Aboriginal and Torres Strait Islander communities (including an Arnhem Land Elder and law custodian and members of the sexuality and gender diverse population), to gather in the same space to share their concerns and listen to each other, on an issue that is at catastrophic portions.

Second, during the Plenary session I chaired on Tuesday on Aboriginal and Torres Strait Islander suicide prevention, Professor Tom Calma and Associate Professor Murray Chapman presented data that caused a silence to vibrate around the gathering.  As I looked across the crowded room, I stood witness to a sea of shocked faces in a state of inertia.

The statistics shared by Professor Calma in the session were not new. Sadly, Aboriginal and Torres Strait Islander people are taking their own lives at rates that far exceed that of non-Indigenous people and, in some age ranges, the rates are possibly the highest in the world. Such as, that young Aboriginal men and women are dying at four and five times the rate of non-Indigenous youth.

It is clear that the solution lies within the people, and I believe we have never been in a stronger place to address what it is that is causing Aboriginal and Torres Strait Islander people to take their own lives.  In essence, there is a shift occurring across Australia as people become aware that the social engineering, which has previously shaped our society, does not benefit the next generation’s future. For Aboriginal and Torres Strait Islander people I believe we are in a pivotal moment of change across communities.

We do not have to hold our anger for systems that are not structured for our people. We have the expertise, education and resilience to be present in the redesign of “the system”, that involves capacity building communities.

From the development on the first Aboriginal Medical Service in Redfern, in 1971, Aboriginal and Torres Strait Islander organisations, people and communities have been very clear in articulating that to address our people’s health and social-emotional well-being effectively change must be driven by our people, “for the people, by the people”.  The same is said for suicide prevention.

While it is crucial to keep reinforcing this, and advocating for funds to go to programs that have been evaluated and proven successful, my only concern is that it after the conference presentations, the sharing of heart-wrenching statistics may have overshadowed our ability to mobilise large sections of the population.

It is also is crucial that the Australian people and the Australian government take a multilateral approach. Non-Indigenous Australians need to know how best to support us as Aboriginal and Torres Strait Islander people in our fight to prevent suicide within our communities. We cannot afford to have the majority of Australia stuck in a state of inertia.

As Professor Calma said, we have done the work. We have the plans to prevent suicide in our people. What we need now is quarantined funding to be released to implement best practice solutions and a National Suicide Prevention Plan developed and implemented similarly to the National Aboriginal and Torres Strait Islander Health Plan.

I believe we also need to be directive, and clearly communicate how non-Indigenous Australians can come with us on this journey of suicide prevention and healing. Surely, as all lives matter. We will not only save lives but also be on our way to building a better rural, regional and urban Australia.

*Dr Vanessa Lee is from the Wik and Meriam Nations, and has lived on the land of the Gadigal people for the past five years. She is a social epidemiologist, educator and public health/ health sciences researcher in the Faculty of Health Sciences at the University of Sydney and a director of the board of Suicide Prevention Australia.