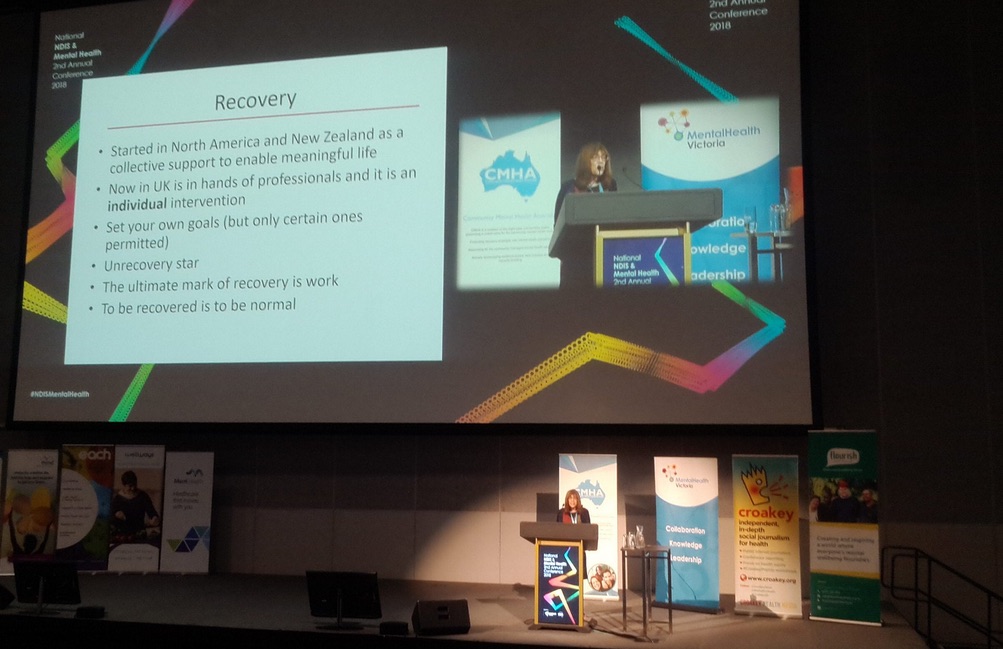 The promise of consumer-focused research and practice to shift outcomes in mental health is still out of reach because those who continue to hold the power in research do not regard consumers as “credible knowers”, a mental health conference has been told.

UK academic Professor Diana Rose said mental health service users – along with people of colour, Indigenous people and other marginalised groups who are subject to research – are still too often seen as “biased” compared with the mainstream scientist who is regarded as the “universal knower”.

“[User-led research] is politically grounded, I make no apology for that whatsoever, because I think the idea that mainstream research is value free and neutral is not true,” Rose told last week’s National NDIS and Mental Health conference in Melbourne. “Research is not the only way of creating knowledge.”

Diagnosed with bipolar, Rose is the world’s first and only Professor of User-Led Research, and co-director of the Institute of Psychiatry, Psychology & Neuroscience’s (IoPPN) Service User Research Enterprise (SURE) at King’s College in London.

In her keynote address at the conference, Rose said she is very sceptical about research co-production, where service users work with mainstream research – and are therefore one of many voices – compared to user-led research where they are the main voices.

She explained in this 2015 article in The Lancet that it is “not easy, even for conventional researchers who promote user involvement, to work with those who take a strong view that research involving service users should be user-controlled”.

You might not think research involves a power dynamic but it does, especially in mental health.

Most researchers are also clinicians and the people they’re doing the research on are patients. That clinician/patient dynamic is replicated in the research setting.

All you can do is tinker around the edges.”

Rose’s presentation, like many others at the conference, sparked strong reactions among the audience of around 700 clinicians, policy makers, services, researchers and consumers.

In return he was subject to criticism from delegates on the floor and via Twitter for “grilling” Rose and forcing her to “explain the epistemological crisis in positivist research”. See some of the tweets below.

“User-led research promotes a different way of listening to those in distress and so figuring what it means,” Rose told Swan.

Melbourne consumer academic Vrinda Edan, chair of the Victorian Mental Illness Awareness Council (VMIAC), said the UK is significantly ahead of Australia in granting academic recognition to user-led research, which has been pioneered by Rose.

Because consumer research remained an emerging field in Australia, few consumer researchers have yet been able to establish a track record to attract funding for user-led research under the fairly rigid expectations for eligibility, she said.

“There’s still a very strong sense in Australia that consumer involvement is as participants [not leaders],” she said.

Rose told the conference she had been a mental health service user all her life, and did her final examinations for her first degree in a psychiatric hospital.

She held an academic position from 1972-1986 in social science and anthropology, but ended up trying to hide her need to access supports “for fear of stigma”.

After a time, “it became very apparent at work that things were not right with me and I couldn’t cope and neither could the institution,” she said.

She was medically retired on the grounds of mental ill-health and her next ten years were “pretty grim”, living on welfare benefits.

However, her life changed when she become involved in what is termed the user/survivor movement in the United Kingdom, which opened up a rights lens for her.

In the 1990s, she said her two identities as service user and researcher came together in the beginnings of user-focused research.

“My marginalised and denigrated identity became an asset,” she said. “I’m not service user and researcher, I use my service use to inform the research I do.”

The first research she was involved in came during deinstitutionalisation in the UK, where mainstream research was, she said, concerned with enumerating the possible negative consequences of releasing people from asylums into the community.

“So they were counting the amount of violence, murder, homelessness and imprisonment [likely to emerge],” she said.

By contrast, her user led project interviewed consumers about their experiences of the asylums compared to their subsequent experiences in hospitals or community health centres.

“We asked people about their experiences in the context of fundamental policy change such as you’re going through now [with the rollout of the NDIS], people who generally at that time were thought could not speak for themselves,” she said.

“We could listen to them differently because we had been in the same position.”

That first work wasn’t very rigorously methodological, she conceded, but it “made a splash”, and led the way to subsequent research that has been published in the BMJ and led to outcome measures recommended by the National Institute for Clinical Health and Excellence, which guides health provision in the UK.

“We wanted to demonstrate that user involvement in research could be rigorous and meticulous, but different,” Rose said.

As her slide (below) shows, user researchers have worked since to show their work can add to the evidence base, add another piece of the jigsaw, make the research more relevant. 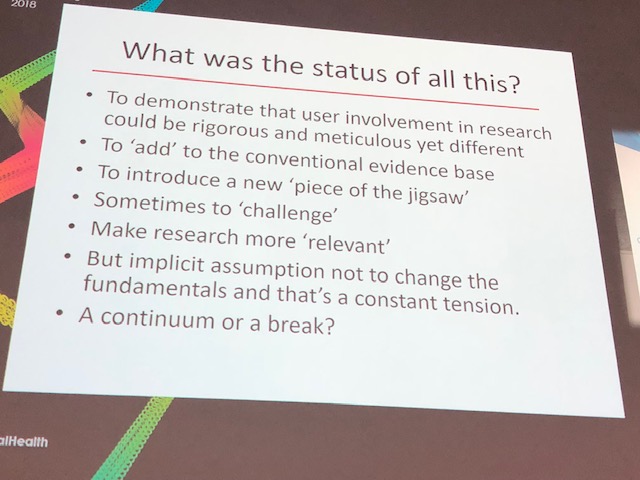 “We weren’t just changing the method but trying … to legitimate a different form of knowledge, the knowledge of service users,” she said.

“This is about power, power held by individuals who are high up in hierarchy of research but also the epistemic system they inhabit that makes the methods they use seem obvious and right,” she said, referring to Australian academic Miranda Fricker who coined the phrase “epistemic injustice“.

Rose also prompted questioning from Swan by challenging mainstream research thinking about the practice of scaling up research, saying she was “done with universality”.

Isn’t it a question about what works, he asked.

“If you’re going to work with communities, you have to understand the communities so you can do the research that’s going to help,” she responded.

“If you’re going to have an intervention that works, it’s got to be one people want – both clinicians…and the people the intervention is for”. 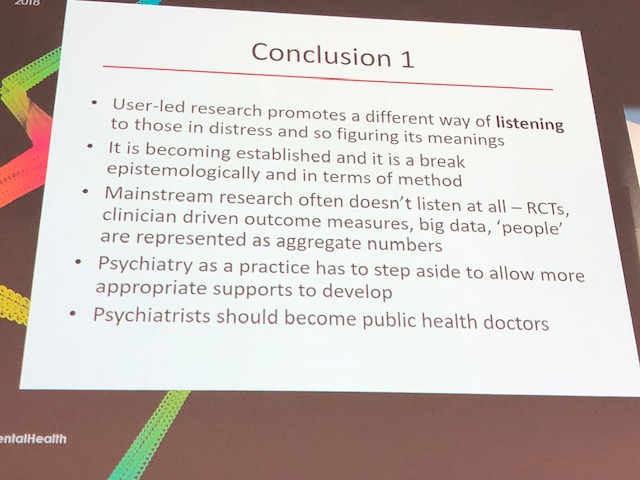 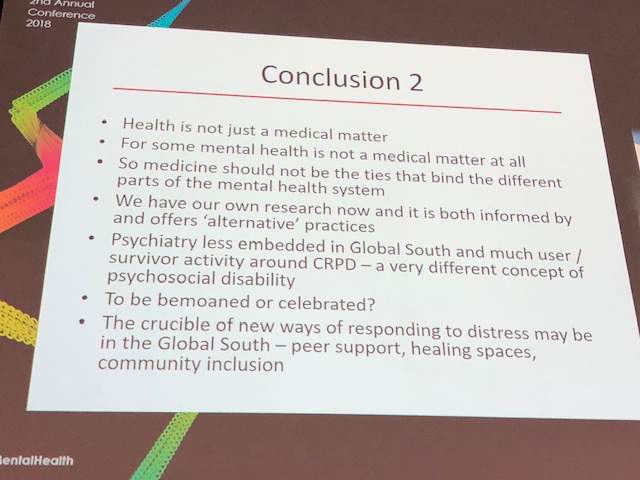 • A conversation with Diana Rose

(It had more than 2,000 views on Periscope within three days of being published there). 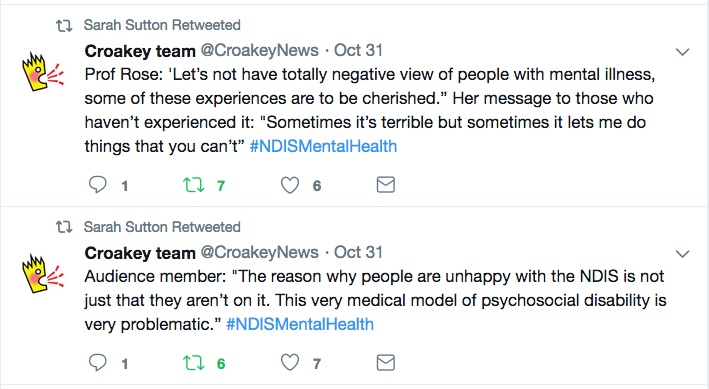 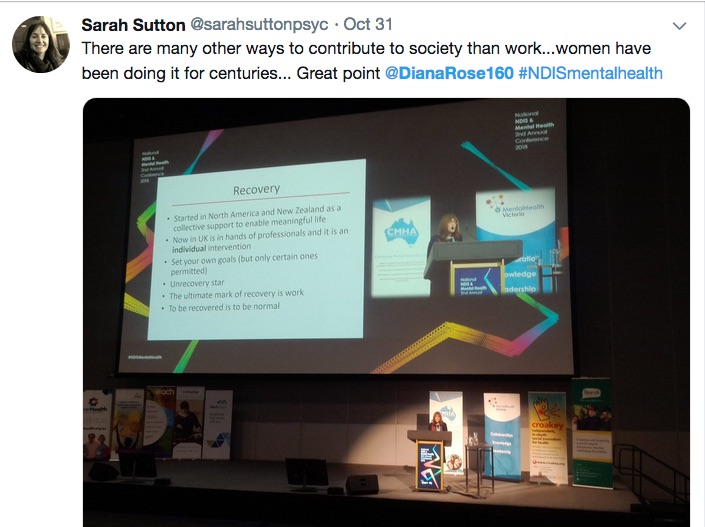 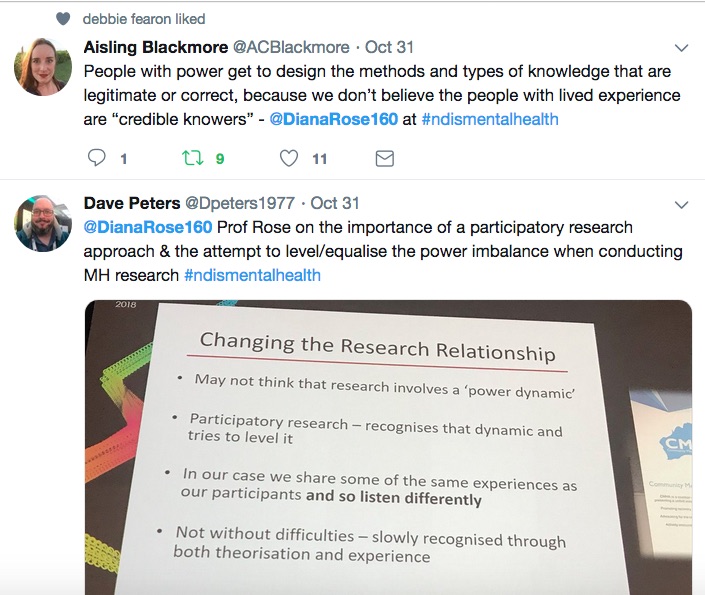 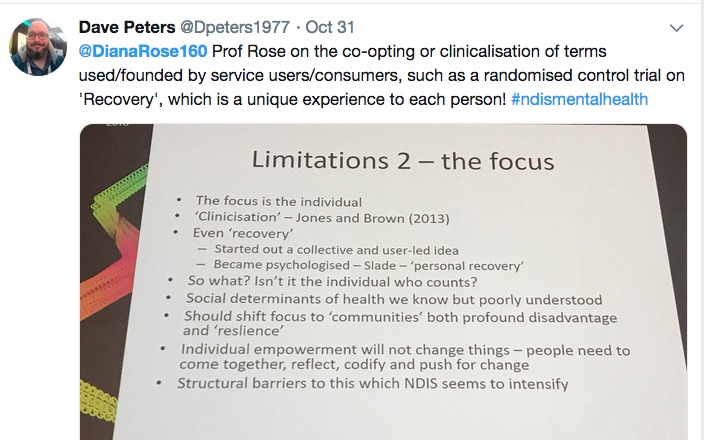 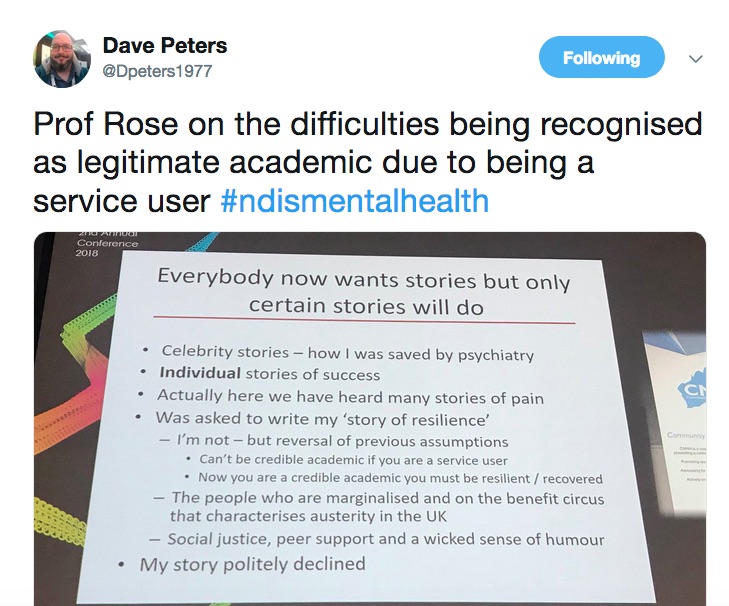 Bookmark this link to track Croakey’s coverage from the conference.

PrevPreviousFor the Social Determinants of Health Alliance, some timely questions about its future
NextWhy we need to keep the gender focus on elder abuseNext