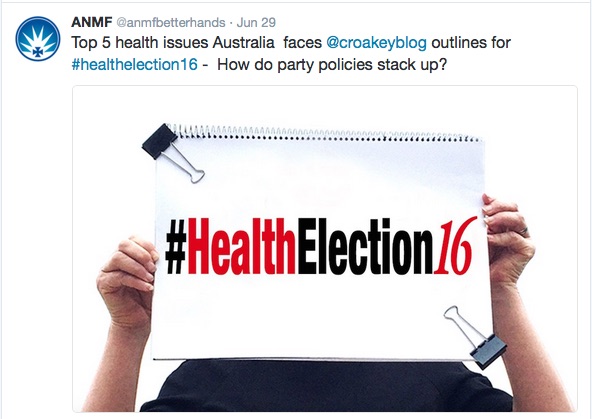 On priorities and policies

If health decides your vote, then why would you give it to the Liberal – National Party Coalition?

And so we have come to voting time, after a long #AusVotes campaign in which health concerns hit the headlines, although generally in a most unsatisfying way.

The mainstream media mostly didn’t delve much beyond simplistic analyses around health and related policies, epitomised by the “Mediscare” coverage; as my Croakey colleague Jennifer Doggett noted, “the level of scrutiny by mainstream media of both major parties’ health policies has been underwhelming at best”.

Similarly, while the polls told us that climate change is a critical concern for many electors, there was scant MSM coverage of climate as the profound health challenge facing us (as noted below by Dr Tim Senior).

However, there has been plenty of informative reading at online publications such as Inside Story, The Conversation, John Menadue’s blog and from health organisations themselves.

At Croakey we have run almost 60 articles in our #HealthElection16 series – and, as the Twitter analytics at the bottom of this post show, there have been at least 4,340 participants on Twitter in this discussion, and more than 86.5 million Twitter impressions.

I have spent this morning tweeting our #HealthElection16 articles, and the overwhelming message is that the Abbott/Turnbull Government has been damaging, both for health care and the wider determinants of health.

This picture was reinforced by the Prime Minister’s address to the National Press Club yesterday. According to health sector leaders in attendance, there was no mention of climate, and no mention of Indigenous health (or anything related to Aboriginal and Torres Strait Islander people).

“Despite health being a top priority for voters, it received scant attention in the Prime Minister’s address, with no discussion of Coalition health policy and attacks on Labor policy on Medicare,” said Alison Verhoeven, chief executive of the Australian Healthcare and Hospitals Association, representing public health services.

Jennifer Doggett has produced a useful overview of scorecards from peak health groups, suggesting an overall preference for a Green or Labor Government, and concern on a number of fronts with the prospect of a Coalition win.

On 28 March, I nominated my five top health priorities for the election, and it is timely now to revisit these, to see how the policies stack up.

This is the defining issue for public health in the 21st century, according to the Director-General of the World Health Organization, Dr Margaret Chan. “A ruined planet cannot sustain human lives in good health,” she said.

How do the parties stack up?

According to the Climate and Health Alliance, neither of the major parties has credible climate change policies, and nor do they have any substantive policies to reduce the risks to the health of the Australian community from climate change.

The table below is from the Climate Institute. 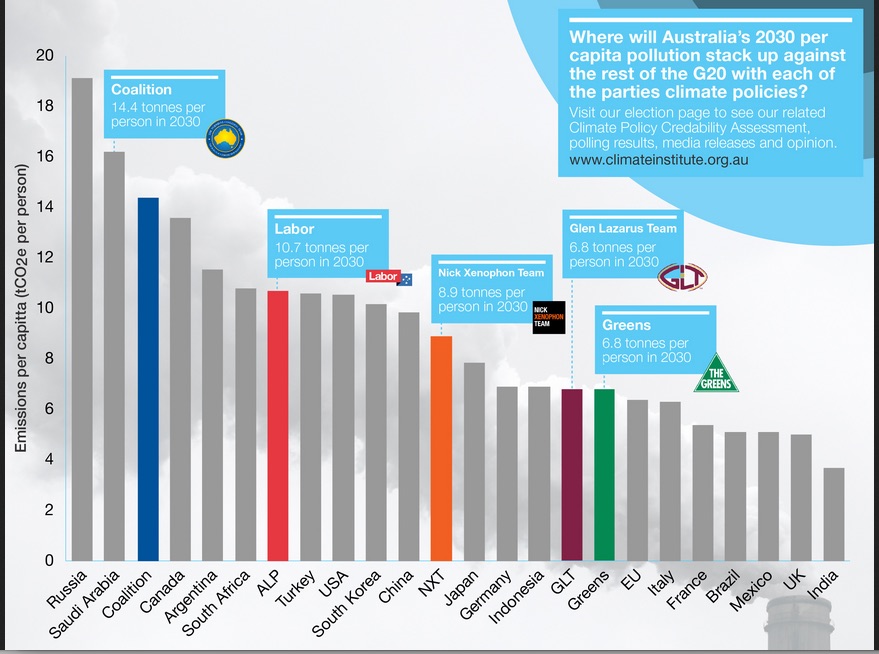 It’s impossible to have healthy people and communities if human rights are not upheld and respected. In recent years we have seen unprecedented activism and advocacy by health and medical professionals and organisations on behalf of asylum seekers and refugees. The health sector is also increasingly speaking up, together with human rights advocates and social policy and law reformers, about the urgent need for governments to tackle the over-incarceration of Aboriginal and Torres Strait Islander people. A human rights-based approach is widely held to a useful framework for helping to improve the health and wellbeing of Aboriginal and Torres Strait Islander peoples and communities.

How do the parties stack up?

The Coalition Government’s failings on human rights – particularly its hard-line, anti-refugee policies – have brought international censure.  The Catholic Alliance for People Seeking Asylum has published an overview of policies, in which the LNP get 1/10; ALP get 5/10; Greens 9/10.

Furthermore, the LNP alone has failed to address the concerns raised in the landmark Redfern Statement, and as Summer May Finlay reported at Croakey this week, they have also failed to address critical housing concerns.

A public health coalition, Prevention 1st, has welcomed the Greens’ support for a sugar tax, and the Greens also come out ahead for their support for action on alcohol-related harms. 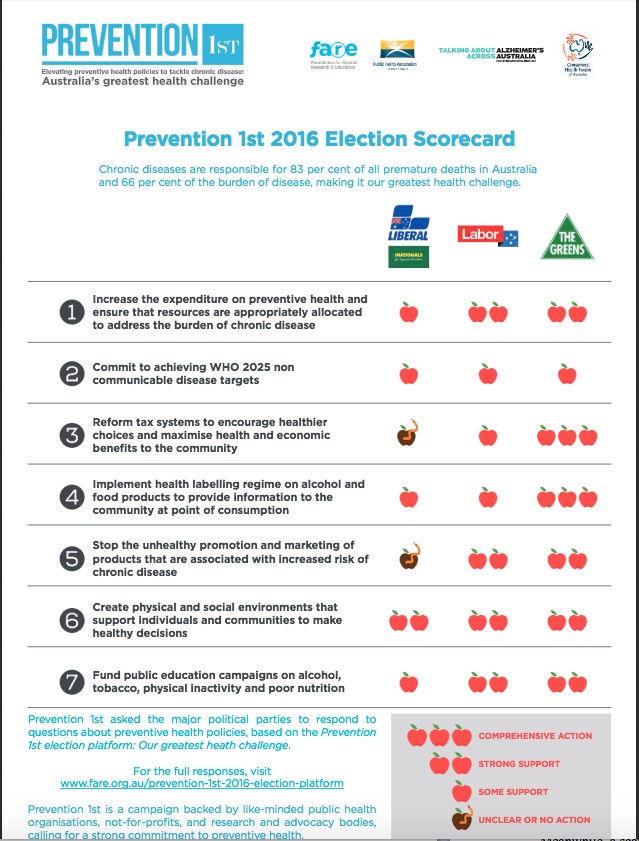 Affordable housing, equitable access to quality education, quality employment, a livable income for those not in work – these are all important health matters, as is tackling social and economic inequality, and ensuring a fair tax system.

Labor and the Greens, to varying degrees, have addressed many of the SDOH. The LNP has not (although its focus on jobs could be seen as acting on the #SDOH if accompanied by concerns for equity). Many of its policies would exacerbate inequality and therefore health inequities.

Do have a look at this detailed assessment on how policies stack up for vulnerable children, from the Centre for Excellence in Child and Family Welfare. 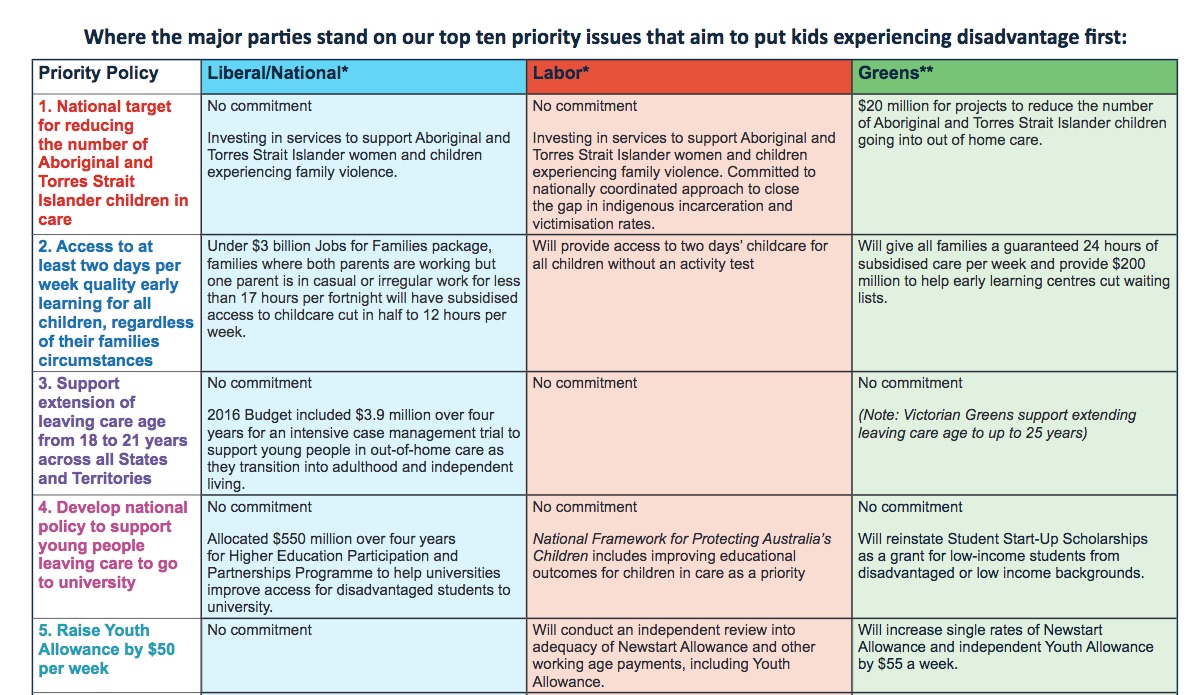 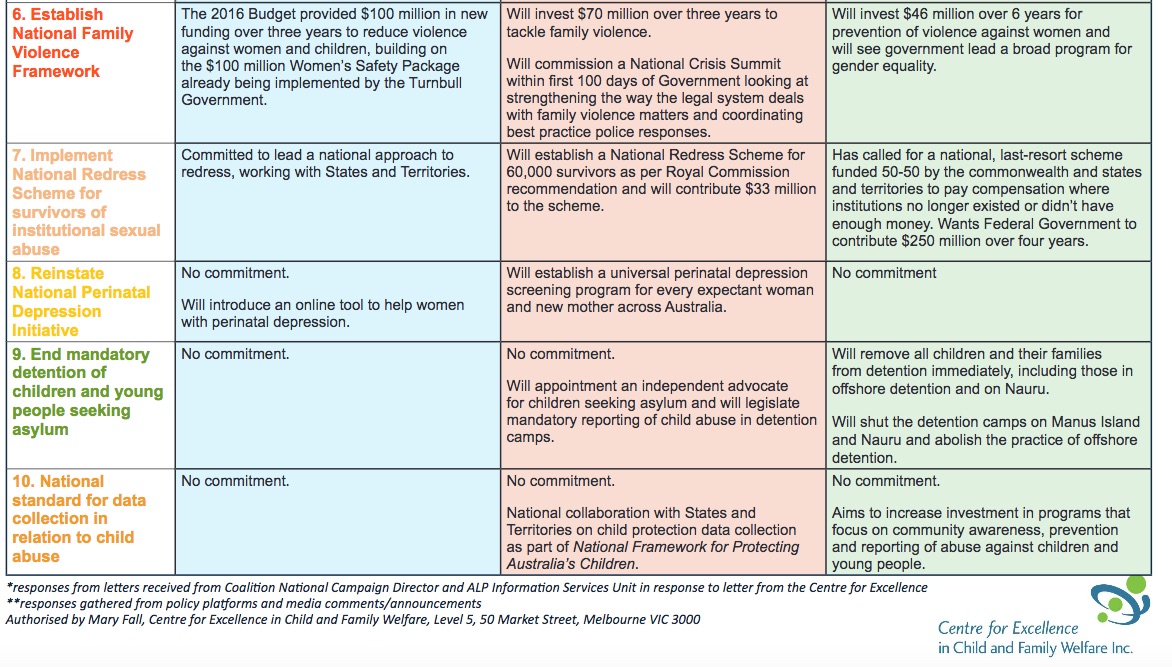 Somehow, we have arrived at the situation in Australia where people often can’t afford the healthcare they need. Or it is not available or accessible for various reasons, perhaps because they live in a rural or remote area or even in the under-served suburbs of the big cities.

When Croakey asked a range of health experts to assess the Coalition’s record on providing equitable access to healthcare, their responses were almost universally damning.

A Labor Government would be under pressure to live up to its election rhetoric, as “Saving Medicare” will need much more than sloganeering. However, Labor’s promise of establishing an Australian Healthcare Reform Commission suggests a willingness to engage with the hard yards required.

People base their voting decisions on all sorts of things – who they trust, how they’re feeling, the personalities and the politics. Perhaps even the weather.

But if the health of the community and the planet, and equitable access to quality healthcare are priorities for you, then the evidence suggests: the LNP does not deserve your vote.

Worse, if the Coalition is re-elected, this will likely prove to be bad news for the community’s health and wellbeing – and especially for those groups of people who are likely to experience worse health and worse access to healthcare.

Thanks to all who have contributed to and participated in the #HealthElection16 discussions. 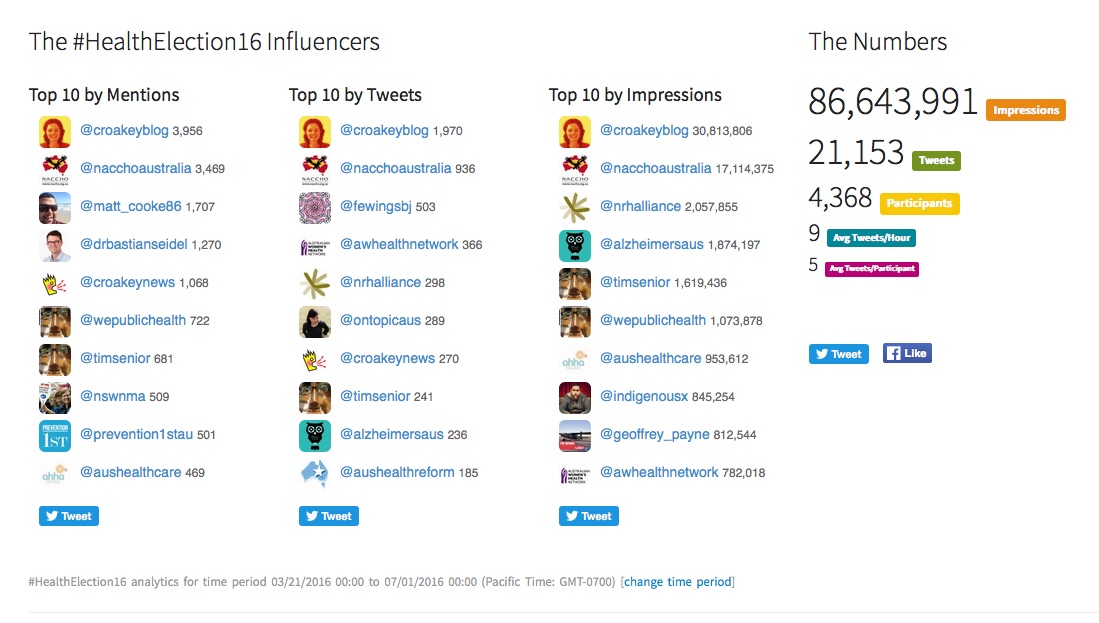 PrevPreviousHealth group election scorecards – a summary
NextHealth was top of the 2016 election agenda: but how healthy is the result?Next