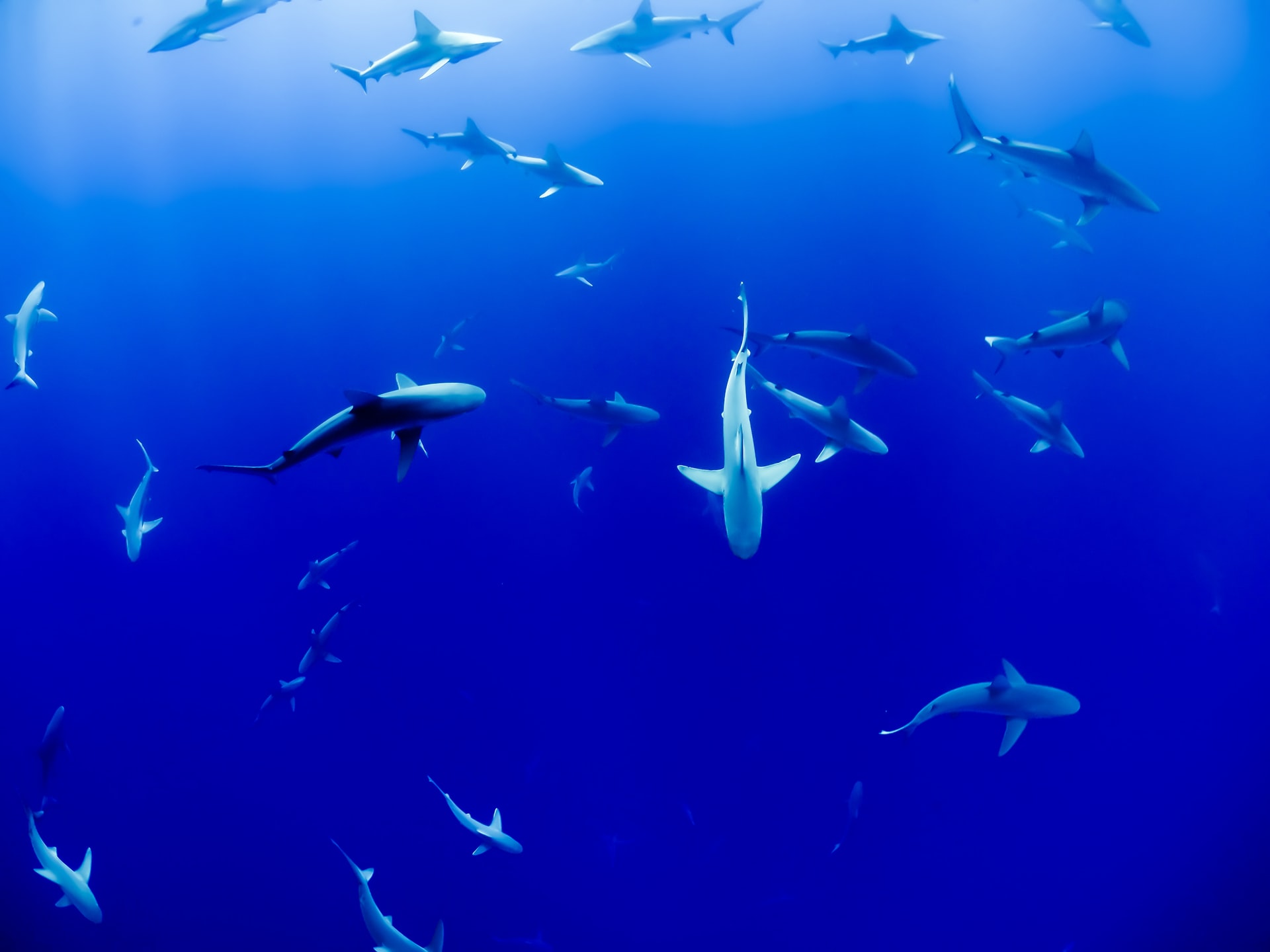 Sharks at play. Image by Jakob Owens on Unsplash

If the Rugby League can do it, then why can’t national politics provide a fair competition?

Prime Minister Scott Morrison loves to watch his beloved Rugby League team the Sharks play. In a pandemic, that can be controversial. As a skilful politician he must be aware of the signals he is sending through his attendance at Rugby League matches.

The Sharks have long been celebrated in the serious media as a critical part of Morrison’s personal and political identity. His commitment arises out of the Shark’s presence in his electorate, but also because of the relationship’s success in bolstering his everyman identity.

In turn that mass appeal derives from the National Rugby League (NRL) competition’s capacity to deliver an exciting, and in my view, sometimes thrilling, competition year on year.

I can’t forget the North Queensland Cowboys just scraping into the final eight in 2017 and then, against all the odds, making it all the way to the Grand Final. They didn’t win in the end, but they could have. And that possibility, of a miracle win, had even a disengaged rugby league follower like me tuning in right until the end.

Managing a football code is a competitive business. Australia is crowded with football codes – the A-League (Soccer), the Australian Football League (AFL), Super Rugby (Union) and the NRL, all vying for the prospective spectator’s attention.

A crucial aspect of garnering active participation and support for any code is the careful and considered planting of the seed of hope at the beginning of each season, that this year could be the year your team goes all the way and snares the premiership.

Overall the NRL is competitive with many of the teams each year having a shot at making it to the final eight and, by doing so, possibly taking out the Premiership.

Since 2010, seven teams, including a maiden premiership win by the Sharks in 2016 (a record breaking fifty years since joining the competition!), have held the Provan-Summons Trophy aloft. That could easily have been eight as the Canberra Raiders (Full disclosure – my team) were very unlucky to have lost the grand final in 2019.

The NRL’s success is undergirded by the careful management of how money flows through the game. These flows are carefully policed through the key tool of the salary cap which limits the amount of money each can spend on securing top players.

In the official words of the NRL, the cap:

…assists in ‘spreading the playing talent’ so that a few better resourced clubs cannot simply out-bid other clubs for all of the best players.

If a few clubs are able to spend unlimited funds it will reduce the attraction of games to fans, sponsors and media partners due to an uneven competition [my emphasis].”

The cap, and more importantly the strict enforcement of the rules, makes Rugby League a fairer and more competitive game.

The great game of national politics could learn a thing or two from the National Rugby League’s experience.

Who spends the most wins!

In the Grattan Institute’s 2020 analysis of the 2019 election (their analysis occurred nine months after the election as current electoral laws governing disclosure of political donations allow for predatory delay before release of campaign financing information) noted that the party with the biggest war chest has formed government from the last five national elections.

Grattan argued that it was unclear whether higher spending drives the election results or because donors simply got behind the party most likely to win. But in 2019, as Labor was widely expected to win, its smaller war chest supported the proposition that money assists in delivering power.

It’s not only the last five elections that the flow of money in Australian politics has favoured conservatives.

Someone starting their career in the Australian Public Service a quarter of a century ago, the year before John Howard won government, will have worked under a Liberal National Government for close to seventy-five per cent of that period. Since the end of World War Two, the split is only marginally more even, with the Liberal National Party governing Australia for roughly two-thirds of that period.

For some, this is how it should be. Most people are conservative most of the time, they argue. Adjusted to the society in which they live, they are too ambitious, too comfortable, too harassed, too poor, too subjugated, to attempt changes.

Influence is what counts

Do donors even care who wins? Influence counts most.

It is not only the lack of effective competition, it’s the feeling that real influence is held by a handful of wealthy donors who influence politicians on both sides to do their bidding.

To Grattan, regardless of who wins, care need to be taken as big money’s influence is so persuasive, it is this influence-peddling needs to be stamped out.

The appearance, and sometimes reality, of political decisions favouring special interests or politicians’ self-interest has contributed to voter disillusionment and falling trust in government.”

The report found that just five percent of donors contributed more than half of declared donations, giving a small handful of donors a lot of power over the finances of our political parties.

They came disproportionately from highly regulated business. Grattan found many examples of donors giving generously when their industry was in the regulatory cross-hairs only to fade away once the political debate has moved on.

Elephant in the room

The surprise 2019 election result has been a watershed in attempts at reforming political donations.

No fewer than three bills from the minor parties and independents are before Parliament seeking to reform political donations. They are in competition with the Government’s Electoral Legislation Amendment (Miscellaneous Measures) Bill 2020, which Lambie has accused as an act of collusion on donation reform between the Labor and Liberal parties and a betrayal of public trust.

This is in part because of Clive Palmer’s unprecedented $84 million dollars’ worth of influence. The exact impact of Palmer’s spending is contested in part because his party failed to gain any seats, though he himself credits his role in making Bill Shorten un-electable as decisive in the ultimate outcome.

This has prompted many to ask, should one individual be able to spend so much to influence an election?

One of Grattan’s solutions is increased transparency.

In commending Lambie’s bill, the report argues for increased transparency through:

The future of these reform minded reports and legislation, however, is not promising. In January 2019 the Coalition and Labour united to defeat a Green’s amendment to foreign donations legislation that would have made all political donations above $1,000 declarable (Currently the threshold is $13,000).

The Grattan’s reform proposals would go a long way to make national politics more transparent and stem a dangerous slide into cynicism and apathy amongst the voting public.

Grattan goes further than simply asking for increased transparency, and seeks to address the problems highlighted by Palmer’s role in the 2019 Federal election:

…ultimately, transparency alone is not enough to protect Australia’s democracy from the influence of a handful of wealthy individuals.

To reduce the influence of money in politics, parliament should introduce an expenditure cap during election campaigns.

Capping political expenditure would limit the influence of individual donors and reduce the ‘arms race’ for more donations between the major parties.”

At that time, this was the biggest scandal in Australian history. Whilst the Storm have remained competitive adhering to the salary cap rules in the teens (they defeated the Cowboys in the 2017 Grand Final), the NRL competition remains strong, popular amongst fans and most importantly fair.

The scandal of the current national electoral laws governing political donations is that they remain so weak that their enforcement leaves us largely none the wiser on how and who is influencing our national decision makers.

To the extent that they do provide some information on these crucial questions, it arrives nine to eighteen months late, well after the policy debate has moved on and often after laws have been put into place favouring powerful interests.

This is corrosive for both for good public policy and our democracy.

In all sorts of fields – energy policy, rational responses to the existential climate crisis that will deeply impact our children’s future and public health, vehicle emission standards and alcohol marketing, to name a few – big money and corporate power dominate the policy outcomes at the expense of human health.